Objective:  To determine the correlation of muscle length and muscle strength with balance and functional status among children with diplegic spastic cerebral palsy.

Cerebral palsy (CP) is defined as “neurological illness often changing motor impairments due to brain lesion occurring during infancy characterised by changing muscles tone, movement disorder and changing in motor skills”.1The damage to the brain that occur in CP is non-progressive in nature although motor impairment is progressive.2 There is no evidence of brain damage in CP getting reversed. However, the maturation and adaptation process can change a child's clinical picture over time. CP prevalence in about 2 out of 1000 livebirths and is the major cause of disability during childhood.3 Population-based  studies  from  around  the  world have reported prevalence  estimates  ranging  from 1.5 to more  >4 per 1,000 live births.4 As far as causes of CP, motor type and seriousness of weakness are concerned, CP is a diverse condition. Thus, there are different classifications of CP primarily based on motor type and topography. The topographic CP includes quadriplegic, triplegic, diplegic, hemiplegic and monoplegic cases. Motor CP includes spastic, dyskinetic, ataxic, hypotonic, and mixed CP cases. In diplegic CP, lower limbs are more seriously affected than the upper limb.5 At times, patients have toe strolling because of a dorsiflexion problem of the foot and expansion in the tone of the lower leg. In serious cases, there is a flexion of the hips, knees and elbows, and when the child is held upward, the firmness of the lower furthest points is generally articulated and tightness of the adductor muscles of the lower legs cause scissoring of lower limits.

CP tends to affect the strength and tone of muscles and affect the motor control which leads to a variety of musculoskeletal disorders. During childhood, the motor skills of a child develop, but eventually this development reaches a plateau. In CP, the most common impairment is muscle weakness, a causative factor for limiting coordinated functional activities, as opposed to muscle spasticity.6 Muscle weakness and loss of lower limb strength .are caused by a decrease in central activation and a difficulty with neural development.7 Collagen fibres are abundant in CP children, making it harder for them to execute various motions and the increased amount of collagen fibres contribute to contracture development, and, due to the weakness of the agonistic muscle, full stretching of the spastic muscle is not permitted, resulting in contracture development.8 Shortcoming of muscles and practical impedances are firmly related in light of the fact that the weakness or failure of muscles to create the greatest number of muscle withdrawals detached from a singular muscle brings about generalised developments that result in early exhaustion and influence muscles perseverance.9 Balance disorders are responsible for the motor dysfunction in children with diplegic CP. To maintain balance during performance of a certain task, complex processes are involved, like vestibular, somatosensory, musculoskeletal and cognitive system, for controlling the relationship between different body segments and environments.10 Static and dynamic balance is usually impaired in CP children compared to normal children. Balance is the most important component of motor activities, and CP children face difficulty in performing functional tasks related to daily life because of poor balance. Restrictions of functional activities occur because of the fear of fall in CP children. Postural abnormality can be reduced by improving balance performance. Performance of functional activities may be difficult for the individuals and a fall may also result in pain, injuries and disability.11

Muscles tightness has significant and negative correlation with balance, and reduction in muscle tightness may improve balance in patients with upper motor neuron lesion.15,16 Some studies suggested that reduction in walking capability in CP adults has no association with the fear of falling, postural stability, but there is a significant correlation between muscles tightness and gross motor function. However, no significant correlation was found between muscles tightness and gait parameter in CP children.17,18 Available evidence related to CP is limited from Asian countries. The current study was planned to determine the correlation of muscle length and muscle strength with balance and functional status among children with diplegic spastic CP in a Pakistani sample.

The prospective, cross-sectional study was conducted from February to July 2021 at the Physical Therapy Department of Chal Foundation and Fatima Physiotherapy Centre, Swabi, Pakistan. After approval from the ethics review committee of Riphah International University, Islamabad, the sample size was calculated using the University of California San Francisco (UCSF) calculator19 with 95% confidence interval (CI) and correlation of muscle length (r) 0.34.10The sample was raised using purposive sampling technique. Those included were children aged 4-12 years with diagnosed diplegic spastic CP, Gross Motor Function Classification System20 (GMFCS) level 1-3 and spasticity level on modified Ashworth scale21 1-3 who did not have any lower limb surgery in the preceding 6 months and were able to follow the commands by the researchers. Those excluded were CP children with hearing and cognitive impairment, having chronic illness other than CP, and those with the history of lower limb surgery.

PBSs a modified version of Berg Balance Scale, and has inter-rater reliability of 0.997 and test-retest reliability of 0.9989.23 PBS consists of 14 items that are scored on a five-point ordinal scale (0-4), with 0 = inability to perform the activity without assistance, and 4 = the ability to perform the task independently. The maximum score is 56 point.23

GMFMS-88 is a valid instrument having 88 items and 5 dimensions used to assess the motor function of CP children, and the reliability ICCs (intraclass corelation coefficients)  for GMFM-88 were 0.99-1.00 for dimension scores.24

Data was analysed using SPSS 22. Descriptive statistics were used to express the demographics. Continuous variables were reported as means±standard deviation (SD), while categorical variables were reported as frequencies and percentages. Correlation of muscle strength with balance and functional status, as well of muscles length with balance and functional status were calculated using Pearson’s correlation. P<0.05 was considered statistically significant. 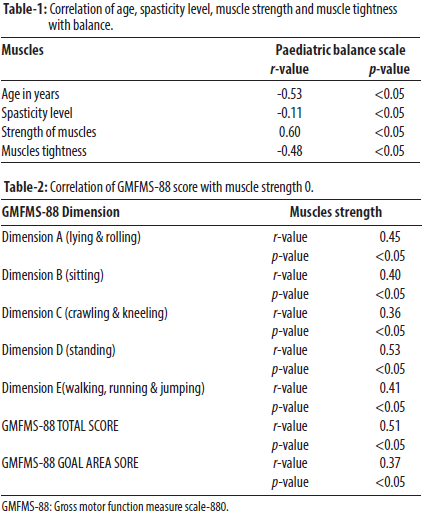 The current study found significant and strongly positive correlation of strength of back extensor, hip extensor, knee extensor, and ankle plantar flexor muscles with balance, and significant, moderate and positive correlation of the strength of ankle dorsiflexors with balance. Similar results were reported earlier.11Though both the studies included participants of same GMFCS level, the age group was different.11However, another study showed muscles weakness had no significant correlation with  balance.17The difference in results might be due to age as the other study17 included participants aged 21-62 years and the methodology of measurement of strength was different.

In the current study, a positively strong and significant correlation was found between the strength of back extensor, hip extensor, knee extensor muscles and functional status, and a significant positively moderate correlation was found between the strength of ankle planter flexor, ankle dorsiflexor muscles and functional status of children with diplegic spastic cerebral palsy. A previous study reported that the strength of hip flexor muscles was strongly and significantly associated with the lower limb activities, but there was no significant association between isometric strength of others muscles group of lower limb and the lower limb activates in adolescents and young children with bilateral spastic CP.18The difference in results might be due to difference in age group and independence level of CP children. Current findings are also in contrast with those of a recent study that assessed relationship between isometric muscles strength and gross motor function in CP children.10The reason of contradiction might be the inclusion of children with multilevel surgeries, like hamstring lengthening surgery.

In the current study, a significant and negative correlation was found between the length of iliopsoas, hip adductor, hamstring, gastrocnemius muscles and functional status, while there was no significant association of soleus muscles length with functional status of CP children. The results are supported by an earlier study25 even though it included participants aged 4-6 years and used different assessment tools. Another study reported that the changes in the muscles length strongly correlated with limitation in angular velocity of joint during walking and functional performance in CP children.26 Another study stated that structural changes in the gastrocnemius and soleus muscles were the main factors affecting the physical activity and muscular performance in CP children aged 5-20 years.9

The results cannot be generalized to patients with GMFCS level IV and V and children with other type of cerebral palsy.

Muscle strength and flexibility were found to be directly linked with functional and balance status in CP children. The focus of training should be on appropriate strength and length of specific lower muscles to achieve optimal goals and independence in such children.