Objective: To observe the effects of dietary counselling on weight management after liposuction.

Method: The case-control study was conducted at the La Chirurgie Cosmetic Surgery Centre and Hair Transplant Institute, F-8/3, Islamabad, Pakistan, from January to July 2018, and comprised adults (100) of either gender undergoing liposuction and/or abdominoplasty who were followed for three months in the postoperative period. The subjects were divided into dietary-counselled group A, which received diet plans, and control group B, which followed up without any dietary advice. Lipid profile was done at baseline and three months post-liposuction. Data was analysed using SPSS 20.

The prevalence of obesity doubled between 1980 and 2014 globally.1 It is a strong risk factor for cardiovascular disease (CVD) and Type 2 Diabetes Mellitus (T2DM).2 Diabesity is a modern epidemic term that was first described in 1970.3 This epidemic condition best describes a pathophysio-logical relation between obesity and diabetes.4,5 It is associated with diabetes, lipid accumulation in adipose tissue, as well as increased free fatty acids (FFA) in blood circulation.6 It also causes insulin resistance (IR), which, in turn seems to be the main cause of the progression of metabolic dyslipidaemia.7 Dyslipidaemia is one of the cardio-metabolic risk factors and is characterised by high levels of triglycerides (TG) and total cholesterol (TC), low levels of high-density lipoprotein (HDL), and accumulation of low-density lipoprotein (LDL) and very low-density lipoprotein (VLDL).8 According to the report of Cholesterol Education Programme, the diagnosing criteria for cardio-metabolic risk factors are: TG 150mg/dl, TC <200mg/dl desirable and >240mg/dl gigh, LDL <100mg/dl desirable, >160mg/dl high, HDL for men <40mg/dl, for women <50mg/dl), and VLDL >30mg/dl high.9

Obesity is managed through weight management programmes.10 In adults, weight management involves dietary advice, exercise, sometimes pharmacotherapy, and perhaps bariatric surgery.11-13 Liposuction is a cosmetic procedure designed to remove superficial and deep deposits of subcutaneous fat, and is most commonly used as an adjunct to other aesthetic procedures and improves their outcome.14 Most patients are, however, interested only in changing their appearance rather than their behaviour and, hence, undergo liposuction alone. Large-volume liposuction was found to improve dyslipidaemia,15 while low-volume liposuction failed to show any effect on lipid profile.16

The case-control study was conducted at the La Chirurgie Cosmetic Surgery Centre and Hair Transplant Institute, F-8/3, Islamabad, Pakistan, from January to July 2018 after approval from the ethics review committee of Allama Iqbal Open University, Islamabad. The sample size was calculated using the formula:17

p = expected proportion of the effect on lipid profile which was kept at 23%;18 and d = absolute error or precision.

The sample was collected using simple random sampling technique after getting approval from Institutional Review Board (IRB). Those included were adults of either gender undergoing liposuction and/or abdominoplasty who were followed up for three months postoperatively. The subjects were divided into dietary-counselled group A, which received diet plans, and control group B, which followed up without any dietary advice. Informed written consent was taken at the time of enrolment, but quite a few individuals left the study because participation was voluntary for the entire duration of the study. There were various reasons for the dropouts, including the fact that most of the individuals had political or social backgrounds and did not want to risk the procedure going public. Most of them were rude and uncooperative, as they were from elite background. Shortage of time on the part of the potential subjects was another reason.

Group A subjects were followed up after they were given diet plans to follow, while group B was followed up without any dietary advice. Lipid profile of both the groups was done at baseline, and then three months post-liposuction.

Data was analysed using SPSS 20. Paired-sample t-tests and independent-sample t-test, as appropriate, were done. Level of significance was kept at p<0.05. 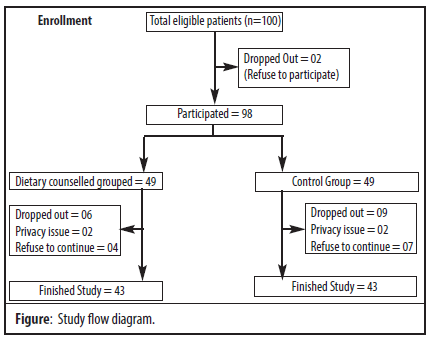 In the present study, energy intake in both intervention and control groups before the surgery was very high. As part of the dietary advice given to the counselled group, customised diet plans were generated according to each individual’s required calories in the form of macronutrients (fats; carbohydrates; proteins). Mean protein energy intake per day was set at 15% of total energy intake per day, mean energy intake through fats was set at 20% per day, and mean energy intake through carbohydrates was set at 65% per day of total energy intake. The control group was not given such dietary advice. When baseline and post-intervention values of lipid profile of both the groups were compared, significant changes in lipid profile were found within the groups. In the counselled group, TC, LDL, VLDL and TG levels fell significantly, and HDL levels increased. The result was consistent with earlier studies.19-21

In the control group, TC, HDL, LDL and TG levels fell significantly three months after liposuction, but VLDL level did not fall significantly in this group. This result was consistent with studies showing lowering of levels of lipid profile following liposuction alone.15,22,23 As no statistically significant difference was found in inter-group comparisons, liposuction alone had a positive impact on lipid profile with or without dietary intervention, but the intervention could increase HDL, the ‘good cholesterol’.

In bariatric surgery procedures, anatomical changes lead to decrease in appetite and change in meal patterns, probably due to pain, or dumping syndrome. Bariatric surgery has been shown to change the rewarding properties of food which may lead to changes in food preference, and, hence, results in decrease in overall caloric intake.24 But liposuction patients might return to their pre-surgery fat mass over one year after surgery. Only 20% of those who undergo liposuction for weight-loss are able to maintain their weight. The reason is probably a significant decrease in energy stores which stimulates a physiological drive to attain the previous fat mass. Subjects report an increase in appetite, and food palatability within a few days of the surgery. This increase in subjective hunger persists for more than a year even after dietary interventions, and their satiety hormones are found to be depressed and hunger hormones are increased. Those subjects are able to maintain a lower body weight who lose a larger initial fat mass, have a lower food addiction score, have greater physical activity level, and healthier dietary habits.25 It has also been observed in human and mouse models that the new adipose tissue, developed after fat-reduction procedures, accumulates as visceral fat, and acts as cardiometabolic risk. Patients are not usually counselled on these potential long-term results of weight-regain after these procedures.26 Many people go for liposuction for weight-loss, although it is just a cosmetic procedure, and is most commonly used as an adjunct to other aesthetic procedures.14 Most patients are still interested only in change of appearance and do not go for change in their lifestyle behaviour. Dyslipidaemia associated with obesity8 can be managed by diet control as well as liposuction, both of which seem to affect lipid profile. Dietary counselling, however, seems to pronounce the effect of liposuction. It can also have long-lasting effects on lipid profile. On the other hand, liposuction might affect dyslipidaemia, but the effect might be reversed if lifestyle changes, including diet and physical activity, are not made.

The current study has added to the knowledge regarding positive and comparative effects of dietary counselling in liposuction patients. The current study’s limitations include a short span of only 3 months. Dietary counselling could have further affected the lipid profile in a positive way, and a regain of fat mass and change of lipid profile could have been observed in the control group if the study was extended over a year or so.

Acknowledgement: We are grateful to all the study participants for cooperation.

Disclaimer: One of the co-authors was also a member of the ethics review board which approved the study.