Ductal ectasia with metaplasia and focal epithelial proliferation in the oral cavity does not correspond to any existing salivary gland lesion. A 72-year-old man presented with a mass in the buccal mucosa, which was excised and initially diagnosed as a cystadenoma. An upper lip mass on the right side, which developed later, was also excised. The lesions were histologically similar, and since they were multifocal and in non-contiguous and independent sites with multiple dilated cystic structures that did not destroy the lobar architecture, the final diagnosis was confirmed as ductal ectasia with metaplasia and focal epithelial proliferation. This condition may mimic various neoplastic lesions.

Intraoral ductal ectasia (DE) with metaplasia and focal epithelial proliferation is rare. DE is characterised by dilation of the salivary duct.1 It may present as a salivary duct cyst (SDC), usually in the parotid gland (approximately 80%).1,2 SDCs of the minor salivary glands present as mucous retention cysts (MRCs).1,2 While mucocoeles are common in the minor salivary glands, most are mucous extravasation cysts, with a low proportion of MRCs.2 These MRCs are usually solitary, and multiple MRCs are rare. Except intraepithelial superficial mucoceles, only a few cases of multiple MRCs have been reported.3,4 Herein, we report the clinical features of multifocal multiple DE with metaplasia and focal epithelial proliferation.

In April 2019, a 72-year-old man with a history of diabetes, hypertension, and dyslipidaemia visited the dentistry and oral surgery department of Tokyo Metropolitan Hiroo Hospital complaining of swelling in the right buccal mucosa, which he had noticed one year ago. The lesion started increasing in size one month thereafter. The patient did not complain or exhibit xerostomia. A well-defined 35 × 25mm mass on the right buccal mucosa was evident (Figure-1A). Magnetic resonance imaging (MRI) showed multicystic structures and a difference between the left and right sides with no evidence of tumour (Figure-1B). Ultrasonography revealed small cystic lesions consistent with the MRI findings (Figure-1C). The lesion was provisionally diagnosed as right buccal mucosa tumour as it was clinically demarcated and was excised under general anaesthesia with a safety margin since it was suspected to be a cystadenoma. Histopathologically, the lesion showed multiple unencapsulated, dilated cystic structures in or between the lobules of the salivary glands (Figure-1D, 1E). The epithelium of the dilated ducts filled with mucous plugs comprised one to several layers of columnar or cuboidal epithelium (Figure-1F), some of which were ciliated or goblet cells or accompanied by squamous metaplasia, most often of the oncocytic type (Figure-1G). The epithelium was mostly flat but protruded into the cyst in some areas. Cell dysplasia was scarce with some multi-nuclear cells. Lymphoplasmacytic infiltration was observed around some ducts (Figure-1H). Initially, the pathological diagnosis was cystadenoma. Additional resection was planned because histopathological evaluation suggested the possibility of a positive posterior margin of the lesion. One month after the excision of the buccal mucosa lesion, the patient complained of an enlargement in the right side of the upper lip. This lesion was well-demarcated, slightly elastic, and the hard mass measured 10×10mm (Figure-2A). Before the excision of the buccal mucosal lesion, MRI was done which showed a difference between the right and left sides of the upper lip with no evidence of a tumour (Figure-2B). Ultrasonography revealed small cystic lesions consistent with the MRI findings (Figure-2C). Additional excision in the right buccal mucosa and excisional biopsy of the upper lip lesion were performed. Pathological evaluation revealed no tumour cells in the additionally resected area of the right buccal mucosa but diffuse ducts under the mucosa of the upper right lip (Figure-2D, E). The epithelium of the dilated ducts filled with mucous plugs comprised several layers of columnar or cuboidal epithelium (Figure-2F), and a part of the duct epithelium on the luminal side showed papillary hyperplasia (Figure-2G). The lesion was similar to the right buccal mucosa lesion. Both the lesions showed cystadenoma-like findings, such as numerous cystic cavities and proliferative epithelial cells, protruding into the cysts. However, they were multifocal and at non-contiguous and independent sites. Furthermore, multiple dilated cystic structures were present in or between the lobules of the salivary glands, which did not destroy the lobar architecture. Both the lesions could be reactive rather than neoplastic. The final diagnosis was DE with metaplasia and focal epithelial proliferation as confirmed independently by multiple oral pathologists. There was no evidence of recurrence at the one-year follow-up. The patient's consent was obtained prior to the writing of the manuscript. 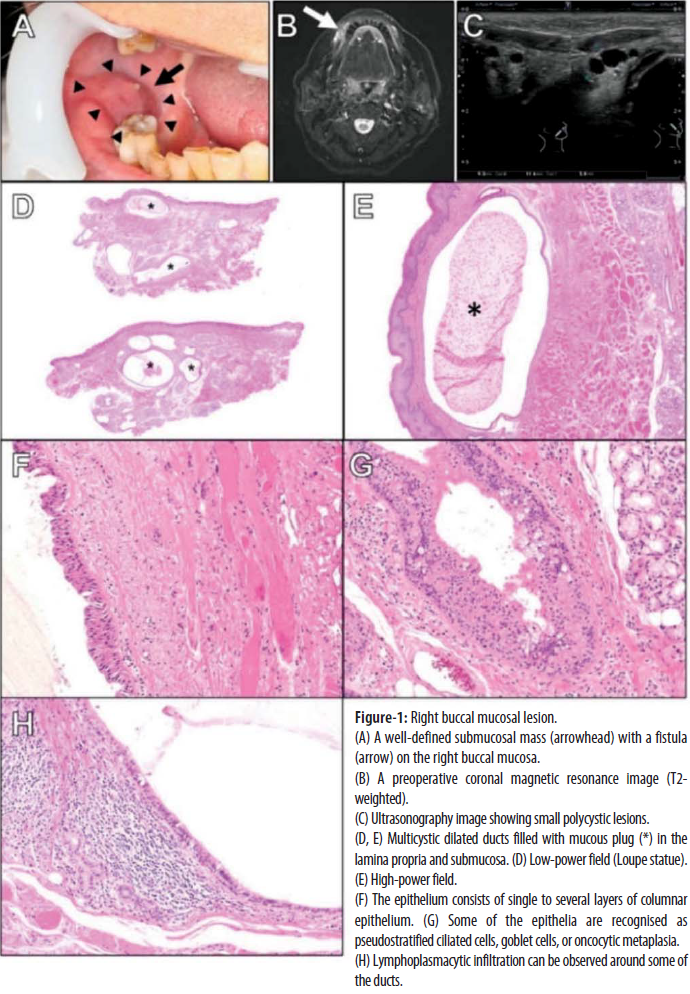 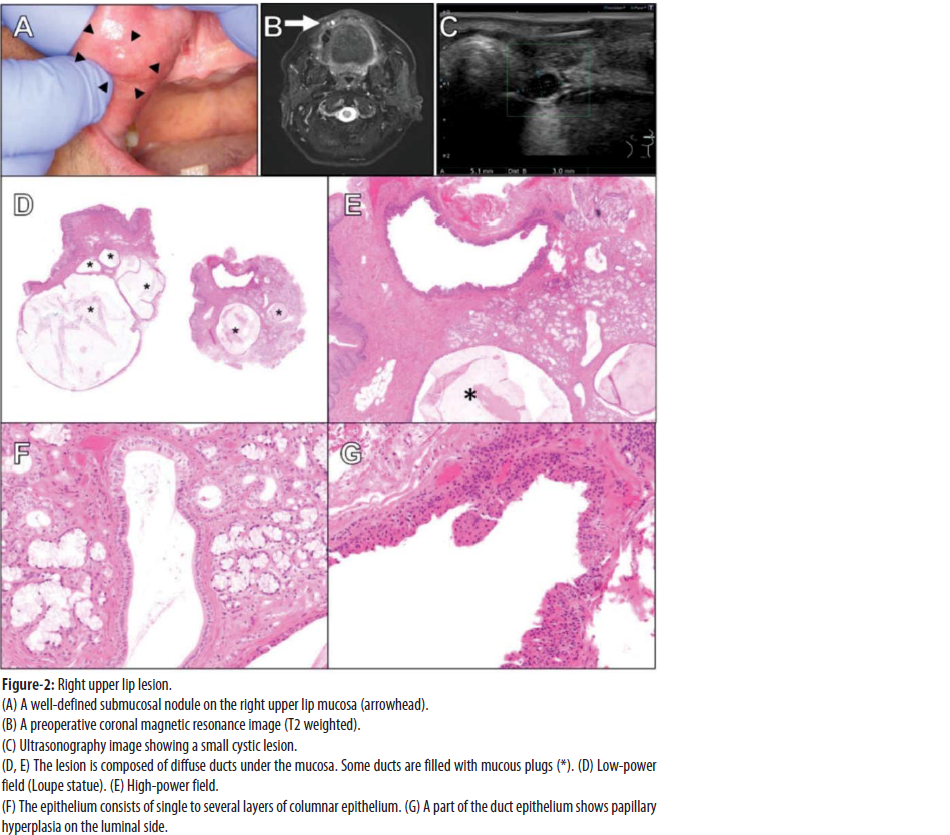 The mucous extravasation type of mucocoele commonly occurs on the lower lip. The retention type occurs in the buccal mucosa, lower lip, mandibular vestibule, oral floor, and palate.2 MRC is usually single but may be multiple. Tal et al were the first to report multiple MRCs.3 Only a few cases of multiple MRCs have been reported.3,4 Previously reported multiple MRCs were characterised by the presence of numerous nodules.3,4 Our case had mass formation, which distinguishes it from previous reports. Changes in the minor salivary glands due to ductal obstruction caused by sialolithiasis, adenomas with oncocytic cell types (reactive oncocytic metaplasia), or intraductal papilloma were reported, with the exception of SDC caused by DE.7 Ductal obstruction other than that associated with SDC is common in the upper lip and buccal mucosa, which is different from the predominant site of SDC in the minor salivary glands.2,7 In our case, the occurrence in the buccal mucosa and upper lip might have been associated with ductal obstruction. Xerostomia can contribute to salivary gland duct obstruction.4 Although the patient was taking oral medications that can induce xerostomia, there was no such symptom. Diabetes mellitus was controlled. Ductal obstruction may result from changes in salivary gland components or factors such as aging, xerostomia, inadequate oral hygiene, and senile metabolic changes.1,4 In this case, the cause could not be identified, but it was hypothesised that multiple factors were involved. The cause for the occurrence of multiple lesions is even more difficult to determine, and further research is required.

Stojanov et al reported that the histopathology of SDCs is diverse, which is typical of reactive conditions. Most cysts (92.7%) are single epithelium-lined cysts, consistent with the normal salivary duct phenotype. In contrast, two or more cystic structures are observed in 7.3% of the cases.2 Most dilated ducts are filled with mucin and 4.5% show calcification.2 Additionally, 68.4% of the cysts show metaplastic changes ranging from focal to complete, as may be seen in obstructive salivary disease. This metaplasia could be oncocytic (50.8%), mucous cell (36.2%), squamous (23.7%), ciliated cells (16.4%), or apocrine-like (14.1%).2 Oncocytic metaplasia is also observed in multiple MRCs.3,4 In the present case, with oncocytic metaplasia, proliferation and protrusion of papillary epithelium into the cyst cavity and surrounding lymphoplasmacytic infiltration were observed.

The differential diagnoses included cheilitis glandularis, chronic obstructive sialadenitis, Warthin's tumour, and cystadenoma.4 Cheilitis glandularis and chronic obstructive sialadenitis were excluded in this case, as the site at which the lesion occurred was not the predominant site of their occurrence and the inflammatory reaction was weak. Warthin's tumour should be considered because of the lymphatic tissue surrounding the glandular epithelium of multiple layers. However, our lesion did not have the typical features and predominant site of occurrence for a Warthin's tumour. In this case, the initial pathological diagnosis was cystadenoma, which is an important differential diagnosis.2,4 Cystadenoma is a well-circumscribed or encapsulated neoplasm with ductal proliferation.2 Papillary oncocytic cystadenoma-like SDCs are distinguished from cystadenomas by the lack of true papillae with fibrovascular cores, adenomatous plaques, or encapsulation features.2 Stojanov et al suggested that some previously reported papillary cystadenomas arising in minor salivary glands represented SDCs with extensive oncocytic metaplasia and a reactive undulation of the cyst lining.2 This lesion should not be misdiagnosed.

We encountered a unique synchronous multifocal DE with metaplasia and focal epithelial proliferation arising from the buccal mucosa and lip, which was diagnosed definitively. The histological findings in this case demonstrate the importance of differentiating this benign lesion from various other neoplastic entities (e.g. cystadenoma).

Disclaimer: It is certified that the opinions expressed herein are only those of the authors, and the manuscript has not been presented or published in any form.