Complete hydatidiform mole with a coexisting foetus of term pregnancy: A case report and review of the literature

A case of a complete mole with a full term live foetus misdiagnosed as placental mesenchymal dysplasia prenatally is being reported here. The infant was delivered at term, and the placenta was accompanied with molar changes. Both the mother and baby were healthy with no complications at one-year follow-up. This report systematically summarises identification methods to reduce the rate of misdiagnosis for better pregnancy outcomes.

Prevalence of hydatidiform mole (HM) coexisting with a foetus is estimated to be 1/100,000-1/20,000 worldwide.1 Given its complications, to say whether the pregnancy will continue or not is not possible. Placental mesenchymal dysplasia (PMD) is a rare placental vascular anomaly with prevalence estimated to be 1/50,000-1/5,000.2 Polycystic lesions by ultrasound can be shown in PMD which is closely similar with HM prenatally. Here, a CHMCF case of term delivery is reported which was misdiagnosed as PMD prenatally.

The case was seen in the Women's Hospital, Zhejiang University School of Medicine, Hangzhou, China, in May 2020. The patient was 31 years old, G1P0. This pregnancy took place via ovulation induction. Ultrasound suggested a liquid dark area around the gestational sac with poor internal permeability and flocculent echo at 6+ gestational weeks. Maternal serum b-hCG level doubled as normal and rose to 189,669 mIU/ml at 9+ weeks. Recurrent vaginal bleeding continued until 20+ weeks. Down's screening using the maternal serum a-fetoprotein, b-hCG, and uE3 in the second trimester was high risk for trisomy 21 of 1:43, followed by low risk of non-invasive perinatal testing. Placental mesenchymal dysplasia (PMD) was considered at 26+ weeks of gestation (Figure-1a, 1b) because the ultrasound showed a large honeycomb echo in the placental parenchyma without obvious blood flow. At 30+ weeks, foetal growth restriction (FGR) was treated with magnesium sulfate (7.5-10g/d intravenously for five days) and Enoxaparin sodium (0.4 ml/d subcutaneously until 36+ weeks) at hospitalisation. A course of Dexamethasone was used. Magnetic resonance imaging (MRI) was done at 34+ weeks (Figure-1c).

At 37+5 gestational weeks, emergency caesarean section was performed suspecting foetal distress. A male infant weighing 2,350g was delivered with the APGAR score of 10-10 at 1 and 5 minutes. The umbilical cord was trivascular of 0.8 cm diameter and the placenta weighed 425g. On general observation, the normal part of the placenta was about 13×14.5×2cm, while the remaining was odd-looking, mingled with 'grape' vesicles, and had clear boundary with normal tissue (Figure-2a). On histopathological examination, normal mature chorionic villi were observed in the normal-looking placenta. However, the molar section revealed diffused oedematous chorionic villi and absence of blood vessels (Figure-2b, 2c). P57kip2 immunostaining was negative in the molar which was positive in normal tissue (Figure-2d). The patient's b-hCG level became negative 54 days after delivery. Despite the lack of karyotype analysis, the baby had normal appearance without trisomy phenotype. Both the mother and the baby were healthy without complications at one-year follow-up.

Informed consent was obtained from the patient for publication of this case report. 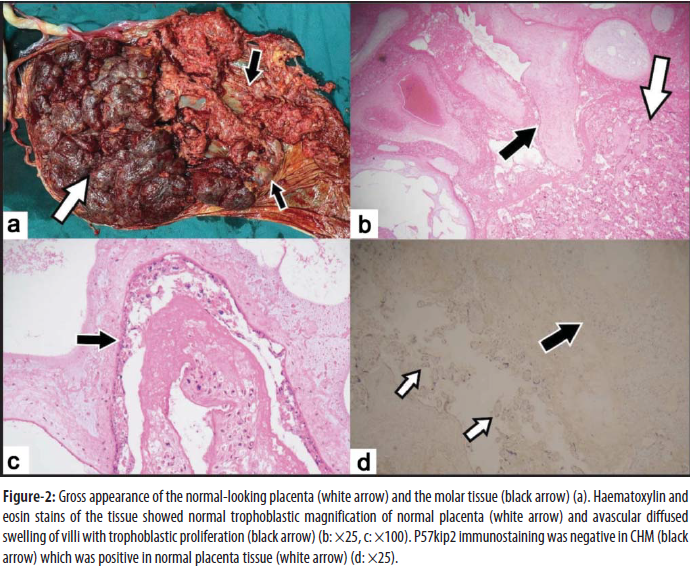 A CHMCF case of term delivery with a favourable outcome was reported which was misdiagnosed as PMD prenatally. Differential diagnosis was performed from different aspects for better treatment and prognosis which had never been described systematically before.

Definition and etiology: Aberrant fertilisation and excessive paternal genome is associated with HM. With the application of assisted reproductive technology (ART) or advanced maternal age, the prevalence of HM with coexisting foetuses (HMCF) increases.3 Dichorionic diamniotic twin pregnancy causes CHMCF. The complete mole in CHMCF has 46 chromosomes followed by the duplication of paternal chromosomes or two different sperms with the ovum not carrying any chromosomal genetic material, while the foetus has 46 chromosomes from maternal and paternal half, respectively which has chance to survive.

Fertilisation of a single ovum and two sperms generally leads to triploid with a bi-parental genome and contributes to PHMCF. Both the mole and the foetus have 69 chromosomes (46 paternal and 23 maternal), leading to miscarriage in the first trimester. Several studies have reported PHMCF cases in which the foetus had a diploid karyotype and continued to successful delivery of the  baby.4

Placental mesenchymal dysplasia (PMD) is a rare kind of placental abnormality.2 Pathogenesis of PMD was correlated with increased expression of vascular endothelial growth factor-D (VEGF-D) (Xp22.31),5 suggesting that PMD happened more often in female infant than male (3.6-8:1).6 Recent studies showed that the occurrence of PMD might be associated with androgenetic/bi-parental mosaicism.

Clinical manifestation and complications: Irregular vaginal bleeding appeared to be the most common manifestation of a HM pregnancy. Approximately 60% of CHMCF patients had antepartum haemorrhage.7 Prevalence of hyperemesis gravidarum and high hCG level-induced hyperthyroidism were approximately 7% and 15% of CHMCF, respectively. Live birth rate was 38% with 10% term birth. The pre-eclampsia rate in the literature ranges from 3% to 40%; it is one of the independent risk factors of poor obstetric outcomes, especially low live birth rate.

In the first trimester, many cases of PHM were present with vaginal bleeding or spontaneous abortion due to triploid foetus. Kawasaki K et al (2016)4 studied 19 cases of PHMCF with a diploid foetus and noted that more than 11 cases turned up with vaginal bleeding. Pre-eclampsia occurred in 8 cases. Most foetuses ended badly with 6 cases of medical termination and 8 cases of intrauterine foetal death or neonatal death.

Gestational trophoblastic neoplasia (GTN) is one of the most concerning issues in HMCF. The risk for GTN after CHM (15-20%) was significantly higher than that of PHM (<5%).8 Suksai M et al (2017)7 observed that the prevalence of GTN after CHMCF reached nearly 37% (76/206). Most cases of GTN following HM were invasive moles, but 3-5% present as choriocarcinoma. There was no significant difference between patients who chose termination in the first trimester (15.8%) and those who continued gestation through the second trimester (20.7%).1 It suggested that GTN risk did not increase with prolonging gestational age of HM.

Nayeri UA et al (2013)6 reported that Intra uterine growth retardation (IUGR) and spontaneous preterm labour (sPTL) in about 33% cases, respectively, as the most common complication of PMD. The prevalence of Beckwith-Wiedemann Syndrome (BWS) was 19%. Intrauterine death accounted for 13% of pregnancies. Fifty-two percent of the pregnancies resulted in preterm delivery. Hepatic mesenchymal hamartoma of new-born seemed to be associated with PMD.9

Blood indicators: In HMCF, the level of hCG in the first trimester is abnormally higher than that in normal pregnancy and reaches an extremely high peak at early second trimester. The a subunit of hCG is homologous to the a subunit of TSH leading to the stimulated release of thyroid hormones, which leads to secondary hyperthyroidism. Serum hCG level below 400,000 mIU/ml significantly predicts a good outcome in HMCF.7 a-fetoprotein (AFP) often rises in patients with a complete mole but can be normal in CHMCF.10

Patients with PMD have normal or slightly elevated b-hCG and occasionally elevated AFP.6 Thirty-eight percent of PMD had an increase in hCG and 70% had elevated maternal serum AFP levels.

Cytogenetic analysis: Both the mole and foetus have 46 chromosomes in CHMCF or PMD. In PHMCF, the mole has 69 chromosomes and the foetus can be triploid or diploid.

Ultrasound: A normal foetus and normal appearing placenta demarcated from a molar mass which has a 'snowstorm' appearance by ultrasound happens in HMCF. Although the molar may partially cover the normal placenta, general swelling of villous tissue with haemorrhagic areas can be identified. The cystic components without demonstrable central flow by colour Doppler imaging help to differentiate HMCF from PMD.11 The sensitivity of ultrasound diagnosis of HM is only 40-60%. Structural defects could be observed antenatally by ultrasound in more than 92% cases of foetal triploidy12 which might distinguish PHMCF and CHMCF.

In PMD, a polycystic mass in the placenta can be found by ultrasound often described as 'Swiss-cheese' 'moth-eaten' or 'molar'.6 There are no clear boundaries between the polycystic mass and the placenta. With the increase of gestational age, vascular structures slowly enlarge, becoming aneurysmal with slow flow of the cystic spaces which are described as 'stained-glass' appearance13 on colour Doppler imaging which is often detected after five-month gestation. However, Jha P et al (2016)14 noted that the markedly slow flow might not be demonstrable in some PMD cases even until the third trimester.

Magnetic resonance imaging (MRI): In HMCF, MRI shows that HM is located outside the T2-hyperintense foetal sac accompanied by an intra- or extra-lesion haemorrhage with T1-hyperintensity.14 Amniotic membrane separates the molar pregnancy from the normal pregnancy. The complication of haemorrhaging by MRI may support the differential diagnosis of HMCF from PMD.

The mass of PMD is located within the placenta in the foetal sac without associated haemorrhage. The mass has dilated vascular spaces.14 A large placenta which is mostly highly inhomogeneous occupied most of the uterine cavity with only a minor part appearing normal. A distinct junction may exist between the molar tissue and the myometrium, but there is no evidence of myometrial invasion.

Histopathology: Normal foetus, placenta, and the molar tissue can coexist in HMCF. Trophoblastic proliferation can be seen in hydatidiform mole without blood vessels. As P57 is the paternal gene blot which expresses the maternal gene, immunohistochemical evaluation of P57kip2 is a method to evaluate the parental genetic origin.15 Immunostaining of P57kip2 is negative in CHMCF patients, different from positive expression in PHM, which can be a differential criterion. Nevertheless, there were still individual CHM cases expressing P57kip2 because of retention of the maternal chromosome 11.16.The main histological characteristic of PMD is abnormal placental enlargement. Microscopically, mesenchymal hyperplasia and oedema of stem cell villi with thick-walled vessels are visible.17 Trophoblastic proliferation and stromal inclusion are absent in PMD which is different from CHMCF fundamentally.

The case of CHMCF with a normal-looking infant delivered at term is reported. Combining the case with the review, it may help in the clinical management of rare cases of CHMCF. Expectant management is acceptable in the case of normal karyotype and anatomy of the living foetus, absence of severe pregnancy complications, such as early pre-eclampsia, and not particularly high level of hCG.

Conflict of Interest: Qiong Luo as the person who signed ethical review statement is also a co-author of the same manuscript.