Radiobasilic transposition arteriovenous fistula (RBTAVF) is often ignored as an option for haemodialysis access. We present the case of a 57-year-old male patient who presented at the AKUH vascular clinic, Karachi, for the creation of long-term haemodialysis vascular access. He had small-sized forearm cephalic vein (1.5 mm), but reasonable sized basilic vein. He underwent successful RBTAVF. Most of the guidelines recommend brachiocephalic fistula (BCF) as the second choice following radiocephalic AVF. This case recommends the inclusion of RBAVF as the second choice for vascular access in international guidelines, in addition to BCF and BBF.

Haemodialysis vascular access (HDVA) is the lifeline for end-stage renal disease (ESRD) patients.1,2 The three most common vascular access techniques include native arteriovenous fistulae (AVFs), arteriovenous grafts (AVGs), and central venous catheterisation.3 Complications associated with these vascular access techniques account for the majority of hospitalisation in chronic haemodialysis patients.1,2 It is essential to utilise and maintain each access in a way that they function for the longest possible period before subsequent options are needed. The number of HDVA options available during dialysis varies from patient to patient. Lack of planning and maintenance of each access can lead to the requirement of more invasive and poorly functioning access with high morbidities. AVFs are classified based on the type of artery (radial, ulnar or brachial) and vein (basilic and cephalic). These include radiobasilic fistula (RBF), radiocephalic fistula (RCF), ulno-basilic fistula, brachiocephalic fistula (BCF), and brachiobasilic fistula (BBF). RBF is often underutilised and not considered as the second option after RCF. Compared to AVGs, RBFs have an acceptable high primary patency rate, a lower infection rate, and fewer thromboses.4,5 It is generally recommended to utilise the RBF option before proceeding to other options.

A 57-year-old male patient with a medical history of diabetes mellitus, hypertension, Ischaemic Heart Disease, and chronic renal insufficiency presented to our vascular clinic for creation of pre-dialysis HDVA in January 2021. Clinical assessment of the upper limbs (ULs) showed normal radial, ulnar, and brachial pulses bilaterally. There were no prominent cephalic veins in the forearm. A prominent basilic vein — appeared suitable for AVF creation. Duplex ultrasound examination showed the forearm basilic vein patent, with an average diameter of 3.0mm and the cephalic vein with a diameter of 1.5mm. Radial, ulnar, and brachial arteries were normal. Considering the patient's age, the high possibility of long-term haemodialysis, and the small diameter of the cephalic vein, it was decided to perform left RB transposition AVF. Under cervical block, the basilic vein was dissected (Figure-A) and all its tributaries were divided with silk 3/0 ties. The vein was divided just above the wrist and its distal end was ligated with silk 2/0. The radial artery was dissected at the wrist level (Figure-B). The basilic vein was tunnelled subcutaneously through the forearm to the radial artery and an end-to-side radio-basilic anastomosis was created. Subcutaneous tissue and skin were closed in the usual manner. There were no postoperative complications, and the patient was discharged on the next day. The fistula had matured at the follow-up visits. On follow-up at six months, the patient was undergoing dialysis through the fistula, three times a week without any problem. A verbal consent was taken from the patient for publishing the case report. 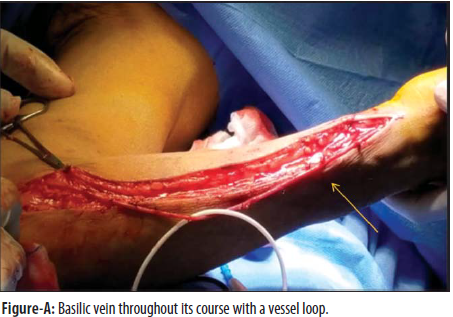 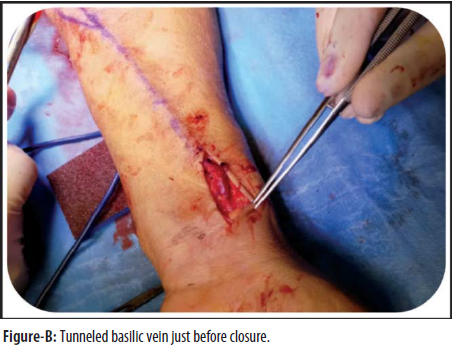 Access for haemodialysis, recurrent admissions, and complications are worrisome to both the surgeons and the patients.1,2 Those who have a functioning access for the longest period are the fortunate ones. In our practice, it is uncommon to have a functioning access for many years without complications including surgical revisions. Therefore, it is logical that all options-especially superficial veins (cephalic and basilic) — are considered the initial priority to start with. Based on our study, it is suggested that one should start with distal veins in the upper limb, preserving it for the longest time while exhausting all methods, before proceeding to proximal veins. According to international guidelines, RCF is the first option followed by BCF, rather than BBF as the second option. Therefore, few centres consider the use of radial or ulnar basilic fistula as a second option for HDVA. Although the use of the forearm basilic vein was reported for the first time a long time ago and many centres have reported the efficacy and patency of forearm RBF as a better option to forearm AVGs,1,2,4,5 it is still underused.

RBTAVF could be considered before forming an upper arm AVF or forearm AVG, in order not to exhaust proximal veins, and we encourage its inclusion in international guidelines.

Declaration: We certify that we have obtained the patient's consent and he understands his name and identity would remain confidential.