Fine-needle aspiration cytology (FNAC) is one of the useful procedures for the investigation of thyroid swellings. FNAC is a minimally invasive procedure, is cost effective, and a gold standard for diagnosing thyroid lesions. Haemorrhage, thrombosis, and infarction are known common complications of FNAC. Post FNAC infarction in thyroid gland has been known as a rare phenomenon. Here, we report the case of a young female who underwent FNAC that showed Hurthle cell neoplasm (Bethesda 3). Four weeks later, she underwent right thyroid lobectomy and the final histology showed extensive necrosis and haemorrhage which is a diagnostic dilemma and hampered our diagnosis.

Hurthle cell neoplasms (HCN) are rare neoplasms. Hurthle cells are large neoplasms, polygonal in shape with a well-defined nucleolus and a hyper chromatic nucleus. They represent less than 5% of all differentiated thyroid carcinoma.1 In addition to the tumour being rare it is difficult for the cytopathologist to differentiate benign from malignant lesions due to the presence of Hurthle cells. FNAC (Fine Needle Aspiration Cytology) is a gold standard for the diagnosis of thyroid lesions as it is minimally invasive, cost effective, and has a relatively high rate of accuracy.2 FNAC is also the preferred diagnostic tool as it minimises the need for unnecessary thyroidectomies if the lesion turns out to be malignant.

Although FNAC is the preferred diagnostic tool forthyroid lesions, it has its own set of drawbacks. FNAC can cause traumatic micro-vascular injury that can lead to secondary changes.3 Among all changes haemorrhage, infarction, and vascular thrombosis are the most common. Post FNAC infarction can be of three types: central necrosis with viable periphery, wedge shaped necrosis or total necrosis.3 Post FNAC infarction is a rare phenomenon and is a barrier for proper patient management.4

We report the case of a female who underwent FNAC that showed HCN and on further histopathology post right thyroid lobectomy, thyroid gland infarction was observed. This rare case is perhaps the first reported in our country.

A 36-year-old female, with no known co-morbidity, presented to the ENT department's outpatient of Liaquat National Hospital on September 23, 2021, with the complaint of anterior neck swelling for the past 20 years. The swelling gradually increased in size, was non-tender and there were no pressure symptoms including dysphagia, odynophagia, dyspnoea or hoarseness. The patient had no symptoms of fever, weight loss, change in bowel habit, appetite or heat/cold intolerance. Her medical history was negative for prior radiation therapy and familial thyroid disease. On examination, there was a solitary nodule of approximately 3x4 cm, firm in consistency, on the right side of the neck moving with deglutition, non-tender and mobile with no palpable lymph nodes. The thyroid function tests were normal.

Fine needle aspiration cytology (FNAC) was done once from the right thyroid nodule. It showed many clusters of Hurthle cells with few follicular cells and some histiocytes; blood mixed with colloid was also seen. Thus a diagnosis of Hurthle cell neoplasm was made according to Bethesda 3, system of reporting of thyroid cytology.5 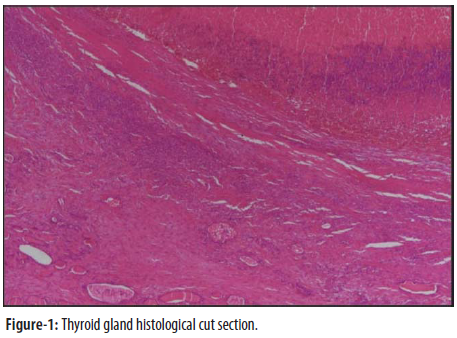 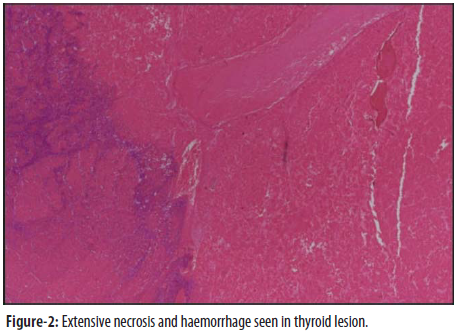 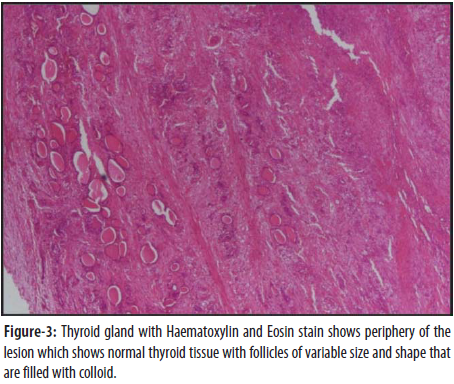 The patient's case was then discussed in the multidisciplinary tumour board and close follow-up was advised for six months.

Hurthle cell neoplasms are heterogeneous in nature. They display a wide range of biological behaviours and are less than 5% of all differentiated thyroid malignancies.1 Hurthle cell neoplasm is a variant of follicular carcinoma and closely resembles it on gross and histological appearance.

FNAC is a minimally invasive diagnostic procedure. It is cost effective, has a high rate of accuracy, and is a well-established tool for diagnosis of thyroid nodules.2 The sensitivity and specificity of thyroid FNAC has been reported to be 65%-99% and 72%-100%, respectively.6 The Positive Predictive value for malignancy was noted to be 97-99%.

FNAC, however, has some drawbacks. It can cause traumatic micro-vascular injury within the nodule that can lead to reactive secondary tissue changes. The inconsistency between cytopathology and surgical histopathology findings can be due to an inherent sensitivity and specificity of FNAC or due to a true disappearance of the thyroid tumour.3 Another reason specific to Hurthle cell could be that it may also mimic histological features of papillary thyroid carcinoma leading to a false positive (nearly 2-10%) and invalid cytological diagnosis.3

According to Pandit AA and Phulpagar MD,7 two types of secondary changes have been identified after FNAC. Acute changes being haemorrhage, granular tissue formation, and nuclear atypia, while chronic changes include capsular distortion, vascular pseudo invasion, and papillary endothelial hyperplasia. Of all these, haemorrhage, infarction, and vascular thrombosis are the most common. Post FNAC infarction can be of three types: central necrosis with viable periphery, wedge-shaped or triangular necrosis, and total necrosis of the entire lesion.3 Many studies have mentioned a phenomenon known as 'vanishing tumour' in which local micro-vascular supply is compromised with the insertion of the needle and extraction of the tissue fragment; hence, the trauma by needle causes venous thrombosis which eventually leads to tumour cell being replaced with necrosis and no viable tissue.8 Another contributing factor to this phenomenon could be the use of large bore needle, extensive aspiration, and repeated sampling of FNAC.4 Post FNAC infarction is a challenge that leads to inconclusive results and is an obstacle in reaching a proper diagnosis and also hinders patient's management.4 Post FNAC infarction of thyroid nodule is a rare phenomenon and its overall prevalence is reported to be 0-10%.4 No such reported data of post FNAC infarction of thyroid gland in Pakistan is available.

Our study reports the case of a female who developed right thyroid swelling that persisted for the last 20 years. This time duration was similar to Hovi SI et al,9 though unlike the study by Sharma R et al.1

FNAC was the preferred diagnostic tool used due to its high sensitivity and specificity.5 On FNAC a diagnosis of Hurthle cell neoplasm was made according to Bethesda 3 system of reporting of thyroid cytology.

Our patient did not have any major indicators of poor prognosis, unlike the case mentioned by Hanief MR et al.1 The patient also had no pressure symptoms or evidence of any extra nodal extension. The Betheseda 3 classification characterised by atypia of undetermined significance had a malignancy risk of 5-15%.9 Taking the former and latter into consideration, the patient was then referred for right thyroid lobectomy.

During the surgery, intraoperative frozen sections were not taken as they had a low predictive value. After surgery, the gross specimen was sent for histopathology that showed central necrosis and haemorrhage but normal tissue in the periphery. This was unlike the case mentioned by Dewan K et al where there was complete necrosis of the thyroid lesion,4 but similar to what Gordon et al reported — variable amount of infarction in the thyroid tissue when surgery was performed within three months of FNAC with high rate of 9.8%.10 In 40.8% of the cases, FNAC was taken less than two months before surgery, and the overall FNAC time frame ranged from one month to two years.7 Our time duration was four months, falling in the latter time frame.

Post-surgery, it was decided to keep the patient under close follow-up as there was no mention of any suspicious foci of capsular invasion and also based on the patient's history.

Hurthle cell neoplasm poses a challenge for the histopathologist while interpreting malignant and benign thyroid nodules in the presence of Hurthle cells post FNAC. Necrosis and haemorrhage may be seen grossly, especially in lesions that have undergone preoperative fine needle aspiration cytology (FNAC). Awareness must be created about this vanishing tumour phenomenon. Different FNAC sampling techniques should be tried and further research and management strategies must be made for this neoplasm.

Acknowledgement: Patient's consent was obtained for publication of her case records.

Conflict of Interest: There was no conflict of interest.

Funding Disclosure: No funding was required for this research.