Thiamine responsive megaloblastic anaemia syndrome also known as Rogers syndrome is a very rare autosomal recessive disorder. The hallmark of the disease is the presence of the classic triad of anaemia, diabetes mellitus, and sensorineural deafness. We report the case of a 14-year-old boy who presented to us with severe megaloblastic anaemia, diabetes mellitus, and sensorineural deafness. The anaemia was further complicated by acute parvovirus infection. He was put on high doses of thiamine (vitamin B1) which led to an improvement.

Thiamine responsive megaloblastic anaemia (TRMA) is an extremely rare autosomal recessive disorder with only 40 pedigrees reported so far.1 SLC19A2 is a gene that encodes a thiamine transporter protein which belongs to a group of solute carriers.2 This protein has a very significant part in the uptake of thiamine at cellular level.1,2

The type of deafness in TRMA is sensorineural and irreversible, and presents in early infancy. It is still unclear if hearing impairment could be improved by administering thiamine supplementations.1

Here we describe the case of a boy who presented with the classic triad of megaloblastic anaemia, diabetes mellitus, and sensorineural deafness with superimposed parvovirus infection.

A 14-year-old boy presented to us with complaints of progressive pallor and generalised bruises in the Haematology OPD of Fauji Foundation Hospital, Rawalpindi, in January 2018. He was the third child of first-degree consanguineous marriage in a Pathan family. He was born of an uneventful full-term delivery. Two elder male siblings were alive and healthy; one of his female siblings died at the age of eight months, the cause of her death was not known to the parents.

The developmental milestones of this patient were normal except for a bilateral hearing impairment detected at the age of one year. He was diagnosed as having megaloblastic anaemia at the age of 18 months and was treated with on-and-off injection B12, multivitamins and folic acid supplementations. Throughout his lifetime, he had only twice received blood transfusions from a local hospital as, according to the mother, he felt really sick, but no documented record of his previous admissions was available.

As serum B12 and folate levels were normal, bone marrow biopsy was conducted which revealed a hypercellular marrow. Myelopoiesis showed moderate dysplastic changes with late myeloid maturation arrest and few giant metamayelocytes as shown in Figure-1. Erythropoiesis was hypoplastic and megaloblastic. The bone marrow showed mostly proerythroblast and few intermediate erythroblasts, as shown in Figure-2, and megaloblastic erythroblasts with typical sieve-like nucleus. The percentage of total erythroid element was less than 05%. The megakaryocytes were moderately dysplastic with some showing hyperlobation and some were hypolabated. The bone marrow iron was markedly increased with moderate number of siderocytes, sideroblasts, and 8% ring sideroblasts. With a paucity of erythroid cells, occasional proerythroblast and severe reticulocytopenia serology for parvovirus b 19 was advised which turned out to be positive. Islet cell autoantibodies test was done to confirm the non-immune nature of diabetes mellitus and it was found to be negative. The classic triad of megaloblastic anaemia with bilateral sensorineural hearing loss and diabetes mellitus led to the diagnosis of TRMA with acute parvovirus infection. The patient was started on insulin, and then discharged on an oral tablet daily the composition of which was thiamine HCI (B1) 100 mg, pyridoxine HCI (B6) 50 mg, and cyanocobalamin (B12) 50 mcg, as pure B-1 preparation was not available. The patient was discharged home as his condition improved. 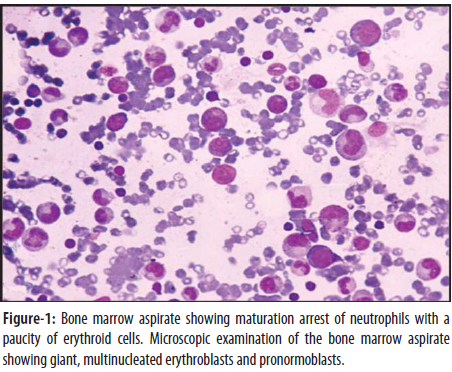 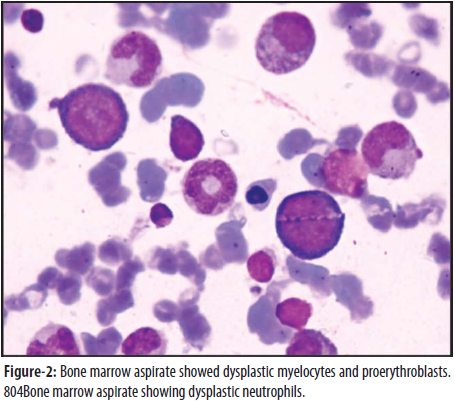 The patient was followed-up after six weeks of treatment and there was improvement in his clinical condition. His Hb was 13 gm/dL, and platelets and white blood cells were also within normal range. His diabetes was also ameliorated and blood glucose levels became normal. However, there was no improvement in his hearing.

TRMA is caused by mutation of SLC19A2 gene. This gene is located on chromosome 1q 23.3 which encodes a thiamine transport protein called THTR 1 that is crucial for the uptake of thiamine by the cells.4 Thiamine is required in high concentration in various tissues, such as islet cells of pancreas, the cochlear cells in the ear and the haematopoietic stem cells. Lack of thiamine in these cells due to defective uptake of thiamine results in cell death and, therefore, the typical manifestation of the triad of TRMA.5

Faraji-Goodarzi M et al reported 15 patients with TRMA who had megaloblastic anaemia with ringed sideroblasts. Bone marrow aspirate and biopsy of these patients showed moderate dysplastic changes in all three lineages.7 Our patient also had moderate to severe dysplastic changes in the myeloid, erythroid and megakaryocytic lineages. There was a paucity of erythroid lineage with only proerythroblasts and dysplastic erythroid cells due to parvovirus infection. This finding further supports the fact that thiamine plays a significant role in haemopoiesis most likely at the stem cell level.7

Parvovirus B19 is a self-remitting disease in which erythropoiesis is temporarily suppressed and may cause transient aplastic crisis (TAC) in all B19 infections10 and the patient usually spontaneously recover from this infection but it could lead to fatal consequences in patients who already have severe anaemia.

Acknowledgements: The patient's parents were informed and they signed and gave consent for publication of this case report.