Bone defect assessment in primary advanced knee arthritis can present a challenge for the surgeon and lead to unfavourable outcomes if not adequately determined during preoperative planning. The aim of this study was to introduce a new, simple and quick way to assess and quantify bone defect using short film radiographs and utilising it to choose the total knee prosthesis. This is a prospective case series of patients who underwent TKA (Total Knee Arthroplasty) using various types of prostheses. Three different angles — Tibiofemoral angle, MPTA (medial proximal tibial angle), and JLCA (joint line convergence angle) — were measured preoperatively to evaluate limb alignment, placement of the tibial, and femoral components of total knee prosthesis. Postoperatively roentgenographic index introduced by Lotke et al was used to assess our preoperative methodology. The American knee society score was used pre- and postoperatively up to one year. A total of eight knees of six patients were analysed (four males, two females). The mean age of the patients was 57.75±5.701 years. All the knees were in varying degrees of varus deformity preoperatively. The accuracy of the preoperatively used radiological angles was analysed by postoperative measurement of tibiofemoral angle (d), tibial anatomical axis (b) and femoral anatomical axis (a), and Roentgenographic index as suggested by Lotke et al. Postoperatively, all the knees were in valgus with tibiofemoral angle (d) 6.50±0.926, tibial component alignment (b) mean was 89±1.195, and femoral component alignment (a) mean was 5.13±0.991 valgus. Mean roentgenographic index was 89.38±3.292. American knee society score improved at one-year follow-up postoperatively and was statistically significant with p<0.001.

In this study, a new classification for bone defects in primary arthritic knees by utilising simple plain radiograph short films and as a guide for implant selection is proposed.

Primary osteoarthritic knees with bone defects are a challenging task in current practice.1 Bone defect varies in size, location and associated ligamentous pathologies. Defects are often on the tibial side but can involve the femur as well, these differ with respect to site, size, and symmetry.1,4 Broadly, defects are contained (cyst formation) and peripheral or uncontained.2,3 Various options are available to deal with such defects and it depends on the defect size and associated features.2,7,8 Bone graft and cement are good options for dealing with small contained defects, larger and peripheral defects may require larger grafts, metal wedge augmentation underside of the tibial base plate in association with revision implants, metaphyseal sleeves and cones, and finally constrained total knee replacement in case of associated ligamentous deficiency.1-3,8

Quantifying the bone defect before surgery is an important step to planning, Anderson Orthopaedic Research Institute (AORI) classification of bone defects encountered in revision of total knee replacement is currently used for assessing the defects. This classification requires both preoperative and intraoperative assessment.11

The prospective cohort study was conducted at the Department of Orthopaedics Unit I, Mayo Hospital, Lahore, from January 2018 to December 2018. Owing to the rarity of TKA, all the patients who underwent TKA using various types of prostheses during the one-year period were included. The patients included in the cohort were those who had advanced osteoarthritis and subsequent varus deformity and required TKA. Exclusion criteria were all revision procedures, and those with inflammatory arthritis.

A total of nine knees in six patients including four males and two females were evaluated for this study. The study was approved by the institutional review board, and all patients provided informed consent.

Short film AP radiographs of the knee were evaluated and anatomical axis of tibia and femur were drawn as depicted in the figures of all cases, after drawing the anatomical axis the joint line convergence angle (JLCA) was calculated.

Medial proximal tibial angle (MPTA) was then calculated by drawing a parallel line along the peripheral defect as shown in all the three figures. 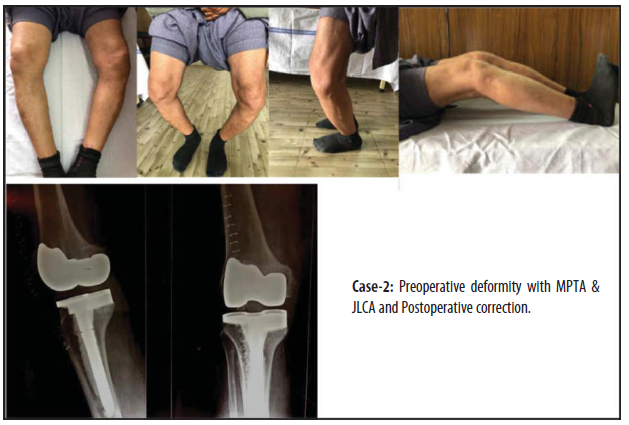 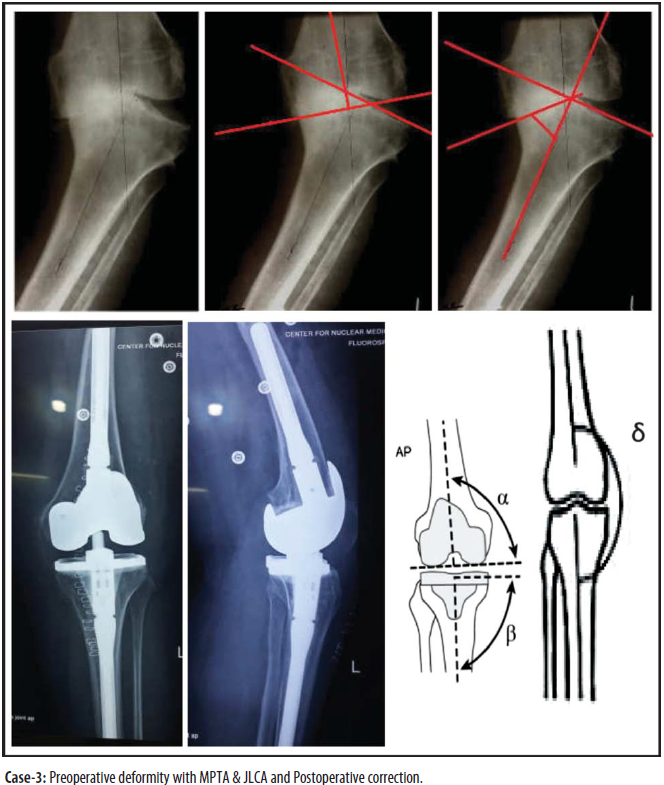 All measurements were carried out by trained orthopaedic surgeons and radiological parameters were studied and the implant was preoperatively provisionally selected using these (JLCA, MPTA) parameters. All the surgeries were performed by the same surgeon.

Case-1: It was a case of bilateral knee osteoarthritis; preoperative radiological assessment revealed right-sided JLCA 12 degrees and MPTA 68 degrees. Left-sided knee JLCA 10 degrees and MPTA 75 degrees. Both the knees were managed with cement augmentation and total knee replacement. The radiographso Case-1 are of left-sided knees of the patient preoperative and postoperative.

Case-2: It was also a case of bilateral knee osteoarthritis. The radiological assessment revealed right-sided JLCA 22 degrees and MPTA 58 degrees and left-sided knee JLCA 20 degrees and MPTA 61 degrees. Both the knees were managed with cement augmentation and total knee replacement.

To quantify and assess our approach of selecting the implant using radiological parameters, the position of a prosthesis was evaluated postoperatively by tibiofemoral angle (d), femoral component alignment angle (a), tibial component alignment angle (b), and using postoperative roentgenogram score system and grading it as suggested by Lotke et al.

A total of eight knees of six patients were analysed (four males, two females). The mean age of the patients was 57.75±5.701 years. Radiographs of the knees were evaluated and the anatomical axis of tibia and femur were drawn, after drawing the anatomical axis, joint line convergence angle (JLCA) was calculated by drawing two lines — one parallel to the femoral condyles and the other parallel to the tibial plateau — and then the angle between these two parallel lines was calculated; this process is termed as JLCA (normal range 0-2). Medial proximal tibial angle (MPTA) was then calculated by drawing a parallel line along the medial tibial plateau with the peripheral defect (Table-1), so MPTA is the angle formed between the line along the tibial plateau defect and the mechanical axis of the tibia line (normal range 85-90). The accuracy of the preoperative radiological parameters utilised in our study method was analysed by measuring the postoperative tibiofemoral angle (d), tibial anatomical axis (b), femoral anatomical axis (a), and Roentgenographic index as suggested by Lotke et al (Table-2). Postoperatively, all the knees were in Valgus tibiofemoral angle (d) with mean 6.50±0.926, tibial component alignment (b) mean 89±1.195, femoral component alignment (a) mean 5.13±0.991 valgus. Mean roentgenographic index was 89.38±3.292. 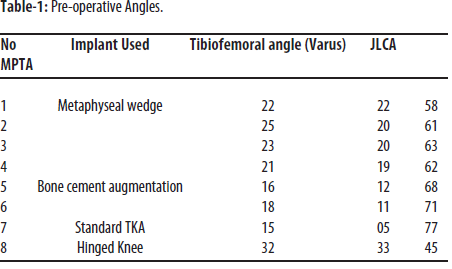 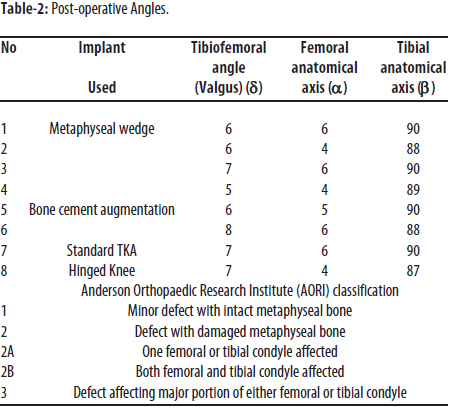 Metaphyseal wedge augmentation was used in patients with JLCA ranging 19-22, MPTA 58-63, cement augmentation was used in patients with JLCA 11-12, MPTA 68-71. In our case series, two knees didn't require any augmentation, as the respective JLCA and MPTA were 5,5 and 77,78. The classification criteria based on the observed JLCA and MPTA for the treatment guide were opted by trained orthopaedic surgeons (Table-3). Based on the study cases the patients were classified in four groups, although due to a small number of cases, we were able to include at least one case of each group with good radiological and functional outcomes. Group 1 was supported by one case, group 2 by two cases, group 3 by four cases, and group 4 was supported by one case, respectively.

Functional outcome with one-year follow-up was measured by American knee score and the score improved in all the knees significantly with 58.56±6.106 preoperatively to 76.22±6.058 postoperatively with p value <0.001.Overall, all the knees were observed to have perfect placement and implant selection postoperatively.

The number of total knee replacements continue to increase and result in successful outcome in the majority of cases. Limb alignment is a major determinant in implant longevity. Malpositioned implants with inability to restore the desired axis of the limb leads to early revision surgery.9 In our country, the majority of primary arthritic knees are in varus deformity, that is why only the primary varus knees were included in our study. Medial sided bone defects are encountered in varus arthritic knees, but deciding the implant or augmentation to deal with the defect preoperatively has been poorly understood in literature. Anderson Orthopaedic Research Institute (AORI) classification addresses and guides treatment of bone defects in revision surgeries but requires both intraoperative and postoperative assessment.11

The idea of our study has been derived from the concept of Dror Paley regarding deformity correction.12 The outcome parameters that were analysed postoperatively to assess whether well-aligned limb was attained by using our assessment tools included tibiofemoral angle (d), femoral component alignment angle (a), tibial component alignment angle (b) and roentgenogram score system.3,5 In a previous study, Lotke et a5 suggested that the normal tibiofemoral alignment is 4-10° valgus and normal femoral component (a) is in valgus 4-6°, and the tibial component (b) alignment is 90°. Attaining these parameters was said to be perfect placement in the study.

In our study, for knees with peripheral contained defects in proximal tibia, short film knee radiographic parameters MPTA, JLCA were used preoperatively to guide the implant and augmentation. Standing full length radiographs are not available in our institution, and only CT-Scanogram is available but that too has the limitation of being done in supine position, therefore standing short film radiographs of knees were used. Our study concluded that by using these parameters as a guide, we were able to achieve the desired and satisfactory results when measured postoperatively.

American Knee Society Score (AKSS) was used to observe the functional outcome after one-year follow-up. American Knee Society Score (AKSS) includes various parameters such as pain, flexion contracture, extension lag, range of flexion, and stability. All those parameters were observed post-operatively and improvement was observed in each case with respect to pain, range of flexion, extension lag, and in overall knee score. The post-operative scores improved in all the knees and the mean reached 76.22±6.058 post-operatively. Improvement in the knee scores were an indication of satisfactory implant position and suitable implant choice that was basically made after utilising the radiological parameters. In the study under discussion, six knees had a score of 70-79 which was good and the remaining two knees had a score more than 80 which was an excellent score. Similar improvement in a study showed mean clinical knee score improvement to be 70.7±12 from 31.6±14 and functional knee score improvement to be 72.7±13 from 30.6±14.13 So as the radiological parameters lead to correct implant choice and positioning, as determined by satisfactory, good to excellent post-operative radiological as well as functional score, it was convincing for us that the way our study has grouped patients based on these angles can be summarised in the form of a classification and to keep it simple and precise two parameters in classification (JLCA and MPTA) were included and did not include the tibiofemoral angle.

Metaphyseal wedge augment was used in 4 knees, with maximum JLCA at 22 and minimum at 19, maximum MPTA was 63 and minimum was 58. Cement augmentation was used in two knees with JLCA 12 and 11, and MPTA at 68 and 71. Two knees did not require any augmentation and respective JLCA and MPTA were 5, 5 and 77, 78. Postoperative parameters were assessed; Tibiofemoral angle (d) were all in valgus with mean 6.50±0.926, femoral component alignment mean was 5.13±0.991 valgus, and tibial component alignment (b) mean was 89±1.195. All the parameters were within the acceptable range of implant position. Mean roentgenographic score was 89.38± 3.292. On the basis of the above results, it was concluded that uncontained tibial defects in primary total knee arthroplasty can be graded by using JLCA and MPTA, and this grading can guide the treatment plan.

This is a novel concept. Limitations of the study include paucity of literature regarding these measurements validated for bone loss. The number of cases is small and long leg standing views are not available. It is recommended these factors be used in future studies along with increased number of cases and longer follow-up periods to strengthen the study.