This study was conducted to ascertain the extent of dental caries among primary school children in Quetta. A total of 362 children were examined for their dental and oral hygiene status. WHO recommended indexes, including Oral Hygiene Index-Simplified (OHI-S) and Decayed, Missing, and Filled Teeth (DMFT), were used for dental examinations.

The study results reveal a high prevalence of dental caries (74%), and the mean "DMFT" score was 1.07±1.63, and "deft" score 2.29± 2.31. There were no significant differences among mean deft, gender, and type of school (P=.27 and .07) in deciduous dentition. Public school children were approximately two times more likely to have dental caries (OR 1.92; P=.021). Dental caries were significantly higher among children with poor oral hygiene (OR 2.40; P=.005). Overall, the treatment needs of the children were noted to be over 90%.

Dental caries (tooth decay) is a multifactorial, dynamic disease of dental hard tissues that can occur at any age and affects both primary and permanent dentitions. According to the World Health Organisation (WHO), dental caries is considered a global public health concern as it affects 60 to 90 percent of school children globally.1 Oral diseases have considerable effects on children, resulting in pain, reduced quality of life, and loss of school days. A national level study in Thailand that explored the extent of school absence (due to toothache/dental caries) revealed that about one in 20 school-aged children missed school due to dental pain; the researchers estimated that approximately 1,900 school hours were lost per 1,000 children due to dental problems per academic year.2,3 Poor oral hygiene, parental education and socioeconomic status are considered important determinants of dental caries among children.4,5

A systematic review including studies from major cities of Pakistan reported a high prevalence of dental caries (56.3%) in Pakistan.6 Oral hygiene is considered a strong determinant of oral and dental diseases; in Pakistan, a study reported only 38.7% students in public sector schools and 55.3% in private sector schools of Karachi had good oral hygiene.7 There is a scarcity of information in Pakistan about the oral health of school children and the determinants of dental caries. This may be because the National Health Surveys do not include oral health indicators and the last national oral health survey was conducted in 2003. Recent, small level individual studies reveal an escalating prevalence of dental caries among school children in major cities of Pakistan, including Hyderabad, Karachi, Lahore, and Islamabad, estimated to be 90, 72, 57, and 49 percent, respectively.8-11

The main objective of this study was to ascertain the status of dental caries and oral hygiene in primary school children of Quetta. The total population of Quetta is 1,001,205; it is the provincial capital of Balochistan province, hosting a diverse population of various casts and tribes along with Afghan refugees.12

This was a cross-sectional comparative survey using a quantitative approach. The study was conducted in Quetta, Pakistan, from October 2019 to November 2019. It is part of a PhD thesis, and ethical approval was obtained from the Institutional Review Committee of Health Services Academy, Islamabad. The study population included primary school children of two public and two private sector schools in Quetta.

A stratified random sampling technique was used to select the sample population. This study was a part of randomised control trial, hence it included the same study population. The required sample was calculated as 352, using the formula by Whitley and Ball 2002, to achieve 80% study power at a level of 0.0513 with an assumption that our intervention would reduce the prevalence of gingivitis (14.5%)14 by 50% among public and private sector school children. A list of all schools (92 in total) in Quetta was obtained including 54 private and 38 public, which were divided into four clusters based on geographic location and type of school. One school from each cluster was randomly picked to be included in the study. After the selection of schools one section from each grade (1-5) was randomly assigned for inclusion in the study.

The survey form used in this study comprised three parts. The first part was about the demographic characteristics, the second part consisted of dental caries status and the third part consisted of the status of oral hygiene of the children. Debris Index (DI-S) of the Simplified Oral Hygiene Index (OHI-S) by Greene and Vermillion was used to ascertain the oral hygiene status of the children.15 DI-S scores between 0.1-1.2 were labelled as "good", between 1.3-3.0 as "fair" and scores between 3.1-6.0 were labelled as "poor".16 DMFT index was used to ascertain the status of dental caries of the children counting the sum of decayed, missed and filled teeth (DMFT for permanent and deft for deciduous teeth).17

Prior to data collection, permission from the school administration was obtained to conduct the survey and parents were provided with an information sheet and a consent form. The inclusion criteria were children (male and female) enrolled in primary schools (public and private) whose parents had consented to participation in the study. Exclusion criteria were the children with limited mouth opening (<30mm) and children with fixed orthodontic appliances.

The survey team included six qualified dentists as examiners and recorders. Standardisation and calibration of oral examiners were performed prior to the survey with inter-examiner and intra-examiner Kappa1 scores of 0.75 and 0.90. Oral health examinations were conducted as per protocols of WHO.17 Survey forms were coded, entered, checked, and processed using MS Excel and SPSS version 16.18 Chi-square test was used to test the differences of proportion, while t-test and ANOVA2 was used to demonstrate the differences of means. A binary logistic regression model was applied to calculate the odds ratio (OR) and 95% confidence interval (CI) to assess and identify the influence of variables on dental caries.

Results of the study are presented under three headings as:

3. Dental Caries status of Children: Overall, 268 (74%) children were affected by dental caries. Prevalence was slightly higher in males 138 (77%) and among public sector school children 139 (80%) as compared with their counterparts. (Figure-1). 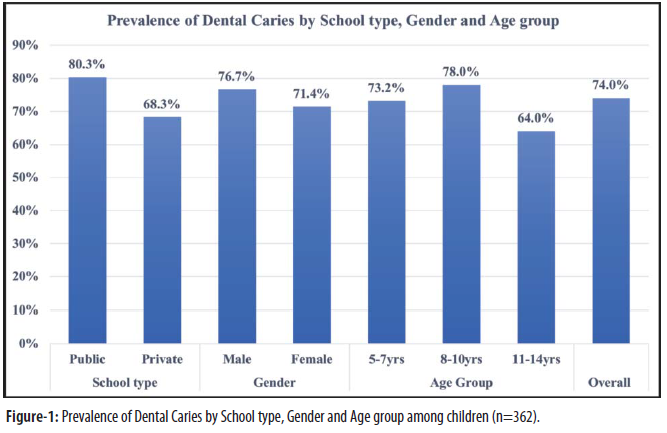 The mean "DMFT" scores for permanent teeth was 1.07±1.63 and the "deft" score for deciduous teeth was 2.29± 2.31. Mean DMFT was highest among the 11-14 years age group (1.71 ± 2.18) and deft was highest among the 5-7 years age group (3.15 ±2.72). Untreated dental caries 'decayed teeth' (DT) in permanent and deciduous teeth was observed to be 92% and 77%, respectively. The percentages of filled teeth (FT and ft components) were very low, i.e. 3% for both the componemts. To test the differences of mean DMFT and deft and their components among the groups, a One-way Analysis of Variance (ANOVA) was performed. Regarding deciduous teeth, there were no significant differences among the mean deft, gender, and type of school (p-value= 0.27 and 0.007) (Table-2). 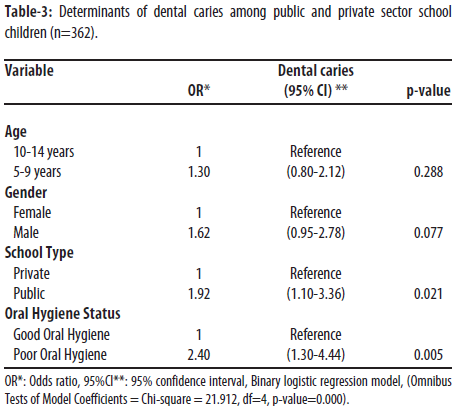 Over two thirds of all the children in this study were affected by dental caries and very few had good oral hygiene. Children studying in public sector schools experienced a higher prevalence of dental caries and DMFT increased with the age of children. The treatment needs of the children in public and private sector schools were very high. Further elaborative research will identify additional factors related to dental caries, utilisation of oral health services and barriers to access, including cultural factors and cost of dental treatment.

Effects of Half-Somersault and Brandt-Daroff exercise on dizziness, fear of fall and quality of life in patients with posterior canal benign paroxysmal positional vertigo: A randomised control trial

Needs assessment for faculty development in health professions education at a medical university in Karachi, Pakistan