Anaemia is a major global health concern that considerably affects young children and pregnant women. Despite many, the most common cause of anaemia is iron deficiency. It is estimated that around 650 to 850 million people are affected by iron deficiency anaemia (IDA) worldwide, with the highest prevalence in underdeveloped as well as developing countries leading to multitudinous mortality and long-term socio-economic consequences.1 IDA leads to unlimited mortalities, decreased productivity, maternal haemorrhage, and reduced performance in vulnerable populations. IDA leads to more dangerous outcomes during pregnancy in females residing in under-developed countries. Anaemic mothers undergo various complications during the gestation period which results in low birth weight and increased infant mortality rate.2

According to the World Health Organisation (WHO), cut-off values of Haemoglobin (Hb) for children <5 years of age and pregnant women, non-pregnant women, and men are 11, 12, and 13 g/dL, respectively. Considering these levels as a standard, for IDA, 7-10.9, and <7 g/dL Hb is taken as moderate and severe anaemia, respectively.3 Anaemia can be treated best by giving exogenous iron preparations as they accelerate the process of erythropoiesis. According to recent studies and clinical trials, parenteral iron therapy is much more superior to oral therapy for the treatment of IDA. The use of intravenous iron preparations significantly increases haemoglobin concentration and reduces the risk of red cell transfusion.4 Moreover, under the best of scenarios, oral iron preparations are not well-tolerated and patients are often non-adherent because of various reasons, including intolerable side-effects and the multiple daily dosage.5 The adverse effects associated with the use of intravenous iron preparations are very rare and negligible but they still carry the potential of life-threatening acute hypersensitivity (anaphylactic) reaction. The serious adverse effects are usually observed with IV iron preparations containing high molecular weight iron-dextran complex which results in a reluctance to their use, while iron preparations containing low molecular weight iron-dextran complex, to much lower extent, are responsible for allergic reactions. Over the years, various IV preparations of iron have been developed that showed a remarkable reduction in the incidence of hypersensitivity reactions. Monofer® (Iron isomaltoside 1000) is one of them.6 But still allergic reactions have been reported.7 So we planned to do retrospective study to check potential of allergic reactions with this new form of iron formulation. The main aim of the study was to evaluate tendency of IV iron isomaltoside 1000 to cause hypersensitivity reactions after administration, as well as the time taken by these reactions to happen in Asian ethnicity.

The study was conducted in the Aga Khan University Hospital (AKUH) Karachi, Pakistan; after the proper approval of the Ethics Review Committee (ERC). This was an observational quantitative study following Retrospective Cohort Study Design. Hospitalized patients who have received IV iron isomaltoside 1000 for any purpose were included adopting multistage sampling (convenient sampling + continuous sampling). All the adult patients to whom IV iron isomaltoside 1000 was administered were included. Patients received any other form of iron or taking steroids as routine and below 18 years were excluded from study.The data was retrieved from hospital Computer Physician Order Entry System (CPOE) from August 1, 2014, to June 30, 2019. There was limitation for number of patients, sample size was not calculated as data collected for 59 months for defined time period. Data was collected and analysed between period 1 July 2019 to 31 August 2020.After data collection of all the patients receiving IV iron isomaltoside 1000, the data was reviewed, verified, scrutinized, and filtered according to the inclusion and exclusion criteria to obtain desired comprehensive data. Then data was coded and statistically analyzed using Statistical Package for Social Sciences (SPSS) version 20.0. Descriptive statistics were used for all studied variables. Categorical variables were described using frequency distribution and Percentages while Mean and Standard Deviation (SD) were used for the expression of continuous variables. The reverse methodology was applied to determine the occurrence and time of hypersensitivity reactions. The patients received antihistamine (Pheniramine maleate) or steroid (Hydrocortisone) following IV iron isomaltoside 1000 were considered to undergo allergic reaction. The time gap between administration of pheniramine or hydrocortisone shows the time taken by the reaction to happen was also observed. Hospital follows the guidelines of anaphylactic reactions based on clinical symptoms as per the standards of the World Allergy Organization (WAO) and the patient profile (red folder) was accessed for this purpose. According to WAO, Grade I, Grade II, Grade III, and Grade IV involves dermal, abdominal, respiratory, and cardiovascular symptoms respectively.8

To evaluate the time of hypersensitive reactions occurring after adminitration, the time gap between the administration of IV iron isomaltoside 1000 and IV Pheniramine maleate (antihistamines) or IV Hydrocortisone (corticosteroid) was analyzed.

Retrospective data of approximately five years (59 months) was retrieved which shows that 953 patients received IV iron isomaltoside 1000. Out of these, 89 (9.34%) were excluded from the study as they were already taking either steroids or antihistamines before the administration of IV iron isomaltoside 1000. Therefore, the sample size became 864. There were 569 (65.86%) females, while 295 (34.14%) were males. The majority of the female population was pregnant while the male population was suffering from IDA.

The results depicted that 63 (7.29%) participants faced hypersensitive reactions after administration of IV iron isomaltoside 1000. They received Hydrocortisone and pheniramine according to the protocol9 (Figure-1). 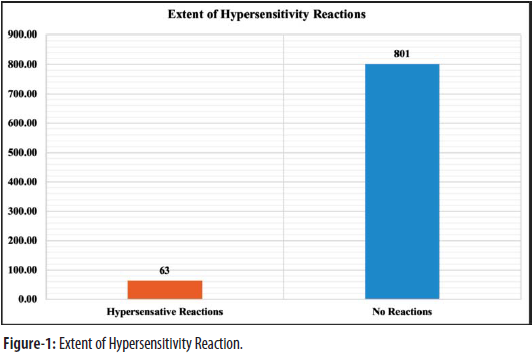 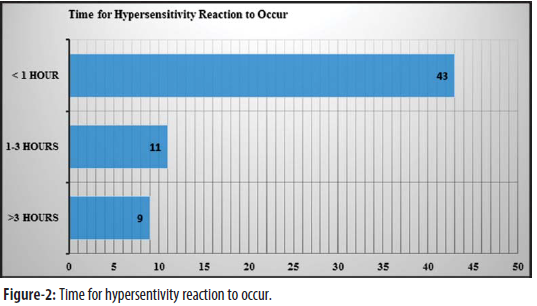 The majority of the studied population showed significant improvement on both Hydrocortisone and Pheniramine, while only a few of them received Pheniramine only.

Parenteral iron therapy is also beneficial in many patients, including those with functional iron deficiency (with increased iron requirement for erythropoiesis), inflammation (a result of, e.g., chronic heart failure, chronic kidney disease, or rheumatological diseases) as well as patients who are unable to tolerate oral iron preparations, and who are noncompliant with oral iron therapy.

There is no test dose recommended for Monofer.11 But chances of allergy persist. Several other studies and trials have shown that the use of IV iron isomaltoside 1000 is more effective, better tolerated, and needs less frequent dosing with an excellent safety profile because no test dose is recommended. However, the probability of hypersensitive reactions cannot be ruled out.6,7 Moreover, to date, there is very limited data available that addresses hypersensitivity reactions during or after transfusion, especially in Asian ethnicity, which are rare but can be life-threatening.7 This study highlights a different type of hypersensitivity reactions associated with iron isomaltoside 1000 IV infusion, which has not been reported previously, as well as their quick management in a tertiary care hospital with special reference to Asian ethnicity.

It is recommended that in case of hypersensitivity reaction, the severity of the reaction should be assessed and prompt treatment should be initiated with no delay. Furthermore, we also recommend keeping antihistamine (Pheniramine, etc.) and/or steroid (Hydrocortisone, etc.) at the bedside of the patient receiving IV iron isomaltoside 1000 to avoid any casualty.

For one form of iron, i.e. iron sucrose, test dose protocol is defined in order to avoid hypersensitivity reaction.12 We recommend checking the sensitivity before starting administration of complete dose of ironisomaltose for patient's ease and compliance. IV iron isomaltoside 1000 should be administered in a setting where trained medical and paramedical staff remain alert to anticipate and provide appropriate pharmacological interventions, so that, basic life support can be provided. Limited number of patients selected as 59 months data for all patients administered iron isomaltose included the study.

IV administration of iron isomaltoside 1000 is safe and tolerated by most of the population of Asian ethnicity but hypersensitive reactions also occur. We recommend to consider defining test dose protocol for Monofer to avoid allergic reactions.

l Permission was taken from the supervisor of the department (Service Line Head) before accessing the Patient Profile (Red Folder).

l The identification of the participants was kept strictly confidential.

l The data was kept entirely anonymous and always carried by the Principal Investigators.