Dog bite management practices by general practitioners; where are we standing in ASIA; a narrative review

Rabies is an infectious viral disease endemic worldwide and is fatal after the onset of clinical symptoms. In 99% of cases, dogs contribute to infectious viral transmission in humans. It causes approximately 10,000 deaths per year, mainly in Asia and Africa, with 95% of deaths occurring in Asia alone. Currently, the number of dog bite cases reported in Pakistan is alarming. Such cases are first seen mostly by general practitioners. The current narrative review was planned to assess the knowledge, attitude and practices of general practitioners as reported in the literature from different countries published between July 2016 and February 2021 regarding dog bite management. Articles were searched using Google, Google Scholar, Ovid, Eric and PubMed databases. Keywords used included rabies, dog bite, general practitioners, medical officers, knowledge, attitude and practices. A total of 7 studies comprising 875 participants were included. Because of the increasing human population, a growing number of dogs and a lack of concerted efforts for the control of disease, the burden of human deaths as a result of rabies will continue to escalate.

Rabies is caused by a ribonucleic acid (RNA) virus of the genus lyssavirus in the family of rhabdovirdae.1 It affects the central nervous system (CNS) of all warm-blooded animals, including mammals.2 About 4000 years ago, a disease named rabies was discovered. Rabies is a Latin word that means "to rage". It was discovered by Italian physician Girolamo Fracastoro that rabies was caused in human beings as well as animals and he termed it a fatal disease or an incurable wound. The first vaccine for rabies was prepared by well-known biologist Louis Pasteur in 1885.3 His nerve tissue vaccine was successful and was progressively improved to reduce often severe side effects.4 Rabies has a mortality rate of 55,000 people per year in Asia and Africa, with approximately 56% occurring in Asia and 44% in Africa, particularly in rural areas on both continents. Children under 15 years of age are the victims of rabies after a bite from a rabid dog. The onset of rabies symptoms can be prevented by wound cleaning with soap and simple tap water and immunisation within a short time to avoid painful death.5 Rabies is a non-reportable disease that occurs grossly in Pakistan.6 Approximately 2000 to 5000 cases among humans are reported every year which is alarming.7 In Karachi, the estimated incidence of rabies is 7-10 cases per million population annually. Carnivores, including dogs, cats, foxes, jackals, mongooses and bats, are potentially rabid and the major transmission mode is their bite, licking of injured skin or scratch by an infected animal.8  Initially, generalised symptoms like headache, fever and malaise appear, leading to acute pain, depression, violent movement and hydrophobia often causing periods of mania and lethargy followed by coma in the final stage. Respiratory arrest leads to the death of the patient with advanced rabies.9

In southern, middle eastern and eastern Mediterranean countries, rabies is the most common public health problem with a high death rate. In Africa and Asia, these deaths are responsible for 1.74 million disability-adjusted life years (DALYs) lost each year.10

Despite major advances in laboratory methods of its control, rabies is emerging as one of the fatal diseases,11 especially in Asia and Africa, where it is one of the basic public health problems due to limited resources.12 Three cycles of rabies have been identified depending upon the animals acting as a vector of rabies spread.13 The first cycle is the urban rabies cycle, which dominates in Africa, Asia and North America and South America. Stray dogs act as vectors in this cycle.14 The second cycle of rabies is the sylvatic cycle in which wild carnivores act as vectors. This cycle may change to an urban cycle because of frequent contact between rabid carnivores and stray dogs. Man, cattle and dogs are the most common victims.15 The third cycle is the vampire cycle which is spread by bats. It is seasonal regarding its spread.16 Dogs are the most important reservoirs of rabies among all the vectors in developing countries and the primary source of diseases in humans.17

General practitioners (GPs) are doctors having a baseline professional medical degree with a practising license and an active practice. GPs act as first-line caregivers for the treatment of dog bites and they are also easily approachable by the victim for the treatment to prevent rabies.

Simple treatment is washing the wound with tap water and soap for 10-15 minutes and is recommended without cleaning with spirit and pyridine. Dressing of wound is contraindicated with an anti-rabies serum which is the best practice to prevent the ascending virus from reaching the brain. Knowledge of the different types of vaccines, site of injection and schedule also remains important for patient education and exact treatment by the GPs. Rabies prophylaxis treatment in laboratory workers is necessary to avoid transmission.

The current narrative review was planned to address all questions related to the knowledge, attitude and practice (KAP) of GPs related to rabies management, including newer aspects of anti-rabies serum and prophylaxis in laboratory work.

Of the 286 articles identified, 7(2.4%) were included for full-text review and detailed analysis (Figure). Characteristics of the included studies18-24 were noted, giving an overall sample size of 875 subjects (Table-1). 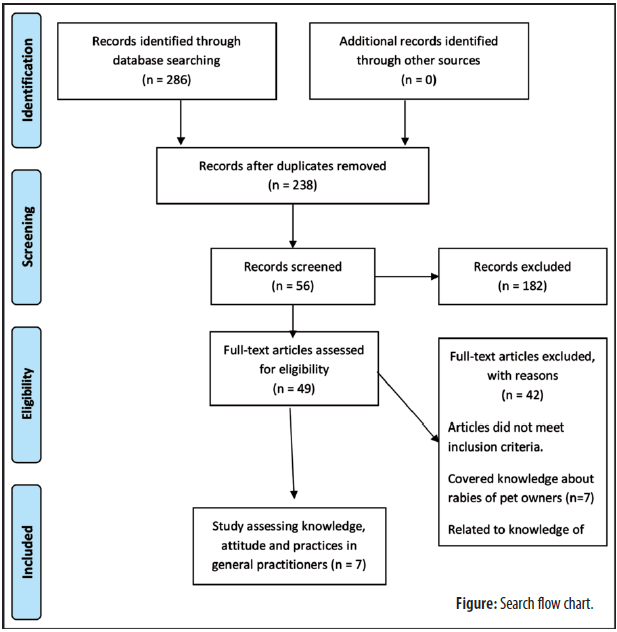 In terms of attitude and practices of GPs regarding rabies, the dressing of the wound is contraindicated in dog bite cases but was done by GPs in a few studies.19,23 Washing of the wound with antiseptic is not recommended for dog bite wounds, and it was used by GP in the study done by Pasi et al22 and Jan et al.23 On the contrary, washing the wound with soap and water was used by the majority of GPs, showing excellent practices in wound management.19-23 Suturing of the wound was done and reported by several studies19,20,23 which is not a recommended practice in such cases. The practice related to recommended vaccination was reportedly critical and poor in studies by Hola et al.20 and Pasi et al.22 Overall, the attitude towards using antiseptic was poor in two studies, while washing with soap and water was good in half of the reported data. Contrary to the other findings related to wound management, suturing was the reported practice amongst the practitioners which is alarming (Table-3).

Second-generation tissue cell culture vaccine (SGTCV) is a recommended vaccine which was practised by GPs as reported by Jan et al.23 Nerve tissue vaccine (NTV) and cell culture vaccine (CCV) was not practised by the GPs.18-24 Tetanus toxoid (TT) injection was also used by the majority of GPs.19,23 The knowledge and practice about pre-and post-exposure prophylaxis and site of administration of anti-rabies serum were also noted and compared (Table-4).

Diagnosis, treatment and reporting behaviours regarding rabies are proportional to GPs' knowledge. If they have good knowledge about certain conditions, they can manage them excellently. The current review analysed the knowledge of GPs regarding rabies and dog bite management. The knowledge about rabies comprises is critical as its mortality rate is the highest making it the 11th most deadly infectious disease worldwide.25

The GPs showed a deficiency in basic rabies knowledge. Many of them were not aware of the cause of rabies, the causative agent of rabies, its transmission and the attack site. Many did not know about the incubation period for rabies. It is alarming that there was a clear lack of knowledge of vaccination for rabies. They did not know about the vaccines, their administration site, the regimen of the vaccine and even the schedule of the vaccines.

The attitude of GPs towards first aid management and first-line therapy was very poor. Many GPs preferred to bandage the wound which is contraindicated as there is a risk of the transfer of the virus. The main reason for this poor knowledge was a clear lack of knowledge, awareness of the World Health Organisation (WHO) guidelines and little interest in the practice of rabies vaccine.26,27 The negligence of GPs in updating their knowledge from time to time and getting information about the new and upcoming vaccines are also among the main reasons.

The poor knowledge of GPs is leading to an increased mortality rate related to rabies. It is an alarming situation. If the GPs are not trained in this aspect, this may lead to an extensively large number of rabies deaths.

The major cause of rabies deaths in various countries is inadequate public health resources and awareness, limited access to control, vaccine diagnostic facilities and no surveillance of rabies and its prevalence. If organised efforts and preventive measures are applied, there is a clear chance of disease reduction and possible eradication.