Objective: To determine the frequency of agenesis of palmaris longus muscle and its association with gender and hand dominance.

Method: The cross-sectional descriptive study was conducted at the Bahria University Medical and Dental College, Karachi, from March 2021 to November 2021, and comprised medical students of either gender from 1st, 2nd and 3rd year of studies. Clinical examination of palmaris longus was done by using the classic Schaeffer's test, and it was confirmed using the Thompson's test. The agenesis of palmaris longus muscle and its association with gender and hand dominance was also tested. Data was analysed using SPSS 23.

Conclusion: Bilateral agenesis was found significantly more in females compared to the males, while palmaris longus agenesis and hand dominance had no significant association.

Originating from the medial epicondyle of humerus, palmaris longus (PL) is a fusiform muscle which is present medial to flexor carpi radialis and passes into the hand over the flexor retinaculum.1 After passing anterior to it, some of the muscle fibres separate out and blend with the retinaculum itself. Later, on entering the hand, the muscle becomes flattened and eventually merges with palmar aponeurosis.2 Being a weak flexor of the wrist, it also contributes to the abduction of thumb.1 Because of its superficial location, easy accessibility and considered a well-developed muscle, it is thought to be one of the most significant muscles used for orthopaedic and reconstructive surgeries.2,3 It is used by surgeons for the repair of flexor and extensor tendons, repair of flexor pollicis longus, mallet finger repair, correction of ptosis, augmentation of lips and management of facial paralysis. Orthopaedic surgeons also make use of the muscle for joint arthroplasty of carpometacarpal joint.2 However, it is also the most common muscle which exhibits anatomical variations, like being double, or split, upturned, with two bellies or may even be completely absent altogether.2,3 Due to its significant role as a graft in reconstructive surgeries, it is important to know its morphological variations. These deviations can include fusion of the muscle with neighbouring muscles, presence of an additional belly, an unorthodox course of the tendon, difference in its origin and insertion by multiple tendons.3,4 The muscle, due to its variations, is also reported in literature to have a protective role over median nerve.3

Globally, a 15% prevalence of agenesis of PL tendon was noted in population. However, this differs in different ethnic groups. Lowest prevalence of 0.6% was observed in South Korean population, followed by 1.5% in Africans.5 Another study reported the absence of PL ranging between 1.5% and 63.9% people.6 A meta-analysis observed a 10.3% absence of PL tendon, with the highest prevalence of 24.7% in people of European descent.3 A study conducted on Pakistani population reported the absence of muscle to be associated with the non-dominant hand.7 A Turkish study mentioned no association between the agenesis of the muscle and the hand dominance.6 A multiracial study conducted in Malaysia observed that people of Indian origin exhibited the highest prevalence of absence of PL muscle, followed by Malays and the Chinese. The presence or absence of the muscle is easily detected by means of the standard Schaeffer's test.8 A cadaveric study reported that bilateral absence of PL was more common compared to unilateral agenesis.4 Fidan et al. endorsed similar results in Turkish population in both genders.5 However, Mahmood et al. reported unilateral absence of the muscle to be more common in individuals living in Islamabad.7 Researchers have reported the association of agenesis of PL more commonly with females compared to males.8 A Pakistani study also observed the prevalence of absence of the muscle to be more in females in comparison with males.7 However, Fidan et al. observed no statistically significant differences between the genders.5

Variability also exists in terms of unilateral agenesis between the male and female genders. Keracan et al. reported the left agenesis to be more in males compared to females,6 while a study conducted on foetuses reported more right-sided agenesis in males against more left-sided agenesis in females.4 Knowledge about the prevalence of PL muscle is a useful tool and thus insight about its prevalence is an aid for the surgeons. Literature search shows that there exists anatomical variability and knowing the distinctiveness between the genders can facilitate the surgeons to practice reconstructive surgeries and grafting with ease. The current study was planned to determine the frequency of agenesis of PL muscle and its association with gender and hand dominance.

The cross-sectional descriptive study was conducted at the Bahria University Medical and Dental College (BUMDC), Karachi, from March 2021 to November 2021. After approval from the institutional ethics review committee, the sample size was calculated using OpenEpi version 3 calculator based on population prevalence 18.9%,9, estimated population size 750, margin of error 5% and confidence interval (CI) 95%. The participants of research were recruited by convenience non-probability sampling. The sample comprised medical students of either gender aged 18-23 years from 1st, 2nd and 3rd year of studies who had no abnormality, disease of upper limb or previous surgeries. Those who had undergone surgeries or had deformities of the forearm were excluded.

After taking informed consent, each participant was tested for the presence or absence of PL tendon in both the forearms. The clinical examination was done using the Schaeffer's test which is considered the gold standard in detecting the tendon of PL muscle.8 The agenesis was confirmed by Thompson's test.10-12 The PL tendon was considered to be present if it was visible by any of the two tests. In order to perform the Schaeffer's test, the participants were asked to oppose the thumb against the little finger along with flexion at the wrist joint. In case of presence, the tendon becomes visible medial to the tendon of flexor carpi radialis (Figure-1). Thompson's test was performed by making a fist with thumb covering the fingers along with flexion at the wrist joint.9 The details of agenesis and presence of tendons in both the forearms were noted in the proforma. 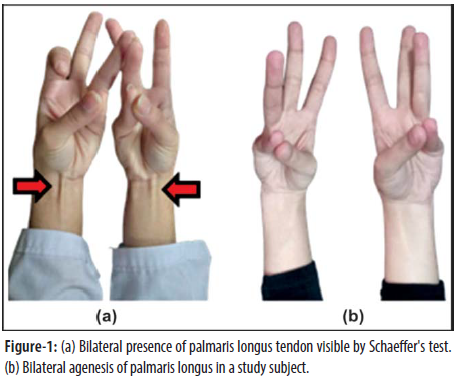 Data was analysed using SPSS 23. The agenesis of PL muscle and its association with gender and hand dominance was tested using chi-square test. The categorical variables were expressed as frequencies and percentages. P<0.05 was considered statistically significant, while p<0.001 was regarded as highly significant. 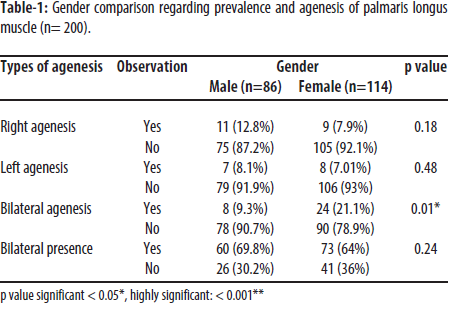 In the present study, the overall frequency of agenesis was 33.5%. This is in line with other studies conducted in Iran (33.7%), Egypt (33.95; 34.3%) and Turkey (31.05%).13-16 Another study conducted in Serbia documented higher prevalence of agenesis (52.3%),17 while a research in Nigeria mentioned the frequency to be only 3.7%.18 The similarity in prevalence of agenesis could be due to the similar geographical location and the dissimilarity to that of Serbian and Nigerian studies could be due to the differences in structural anatomy of people living in various regions of the world.

The current study aimed at determining PL agenesis and its association with gender and hand dominance in the best possible way during the coronavirus disease-2019 (COVID-19) pandemic. However, there are few limitations. The research was conducted at a single centre. In future, multi-centre researches with larger sample sizes should be done to validate the current findings. Studies should be done in various regions across the country to ascertain the prevalence on the national scale. The findings of such future studies from Pakistani population should then be included in anatomy and surgery textbooks as a clinical correlate so that doctors in the region may be able to carry out the grafting procedures keeping in mind the frequency of agenesis in the local setup.

Conflict of Interest: One of the co-authors was part of the ethics review committee which approved the study.

13.    Abdolreza B, Samere DS, Mohajer AJ, Hasan VS, Massood E. The prevalence of palmaris longus absence in the city of Kerman in Iran and the relevance of age, gender and body side. Int J Curr Pharm Rev Res. 2015; 7:45-9.