Objective: To analyse the efficacy of preoperative intravenous injection of 120mg of methylprednisolone acetate steroid on the formation of seroma after modified radical mastectomy in breast cancer patients.

Method: The case-control study was conducted at Ward 3, Surgical Unit 1, Department of General Surgery, Jinnah Postgraduate Medical Centre, Karachi, from November 2020 to April 2021, and comprised female patients with biopsy-proven carcinoma of breast who were scheduled for elective definitive breast cancer surgery. The subjects were randomised into treatment group A and control group B. Group A was given a single dose of intravenous injection methylprednisolone acetate 120mg half-an-hour before surgery, while group B underwent similar surgery without the said injection. Seroma was graded using the Common Terminology Criteria for Adverse Events v3.0. The groups were compared for age, total drainage, duration of drainage, seroma grading and wound status. Data was analysed using SPSS 25.

Results: Of the 60 patients, there were 30(50%) in each of the two groups. The age difference between groups was non-significant (p=0.346). There was a significant difference in the mean total drainage volume and mean duration of drainage between the groups (p=0.001). Seroma formation, seroma grading and wound status were not significantly different between the groups (p>0.05). The efficacy in treatment was high in group A (odds ratio: 2.78; 95% confidence interval: 0.65-13.94).

Conclusion: A single preoperative dose of Injection methylprednisolone acetate was effective in terms of post-mastectomy outcomes.

Breast cancer is a major cause of death among women. According to global data, new cases of female breast cancer increased to 2.3 million, indicating a 12% share of the total cancer burden.1 In Pakistan, the frequency of breast cancer is one in every 0 women.2 Moreover, new cases were expected to increase in Pakistan by nearly 23% in 2020, and 61% in 2025.3

The recent approach to the treatment of breast cancer has mainly been the combination of surgery, radiotherapy, hormonal therapy and chemotherapy. Nevertheless, surgery plays a crucial role. Modified radical mastectomy (MRM) with axillary lymph node clearance (ALND) is common among all surgical procedures in locally-advanced breast cancer. Surgeons encounter several postoperative surgical-site complications after MRM of which seroma formation is considered highly frequent with an incidence rate of 3-85%.4

Formation of seroma in the dead space is fluid collection in the post-mastectomy skin flap and axilla after breast cancer surgery. It commonly starts on the 7th postoperative day, peaks on the 8th day, and slowly reduces until the 16th day when it mostly resolves on its own.5 This can also be considered or hypothesised that lymphatic leakage accumulates in the dead space following extensive tissue dissection; and in the acute phase of wound healing during postsurgical inflammatory reactions enhance the formation of seroma.6 Pro-inflammatory cytokines, like interleukin (IL)-1b, IL-6 and tumour necrosis factor (TNF) alpha and anti-inflammatory cytokines, such as IL-10, are released after tissue injury. Imbalance of these leads to infectious complications later. After extensive tissue dissection and axillary clearance, seroma fluid is collected in the dead space. This fluid changes its composition over the next few days. Initially, it resembles clots of blood with clear lymph due to the breakdown of blood vessels and lymphatics. A few days later, due to inflammatory changes, it becomes an exudate.

Though it was not denominated as life-threatening conditions, the associated morbidity, such as flap necrosis, wound dehiscence, sepsis, prolonged hospitalisation, additional cost and multiple physician visits, might delay adjuvant cancer treatment which cannot be neglected.7 Numerous techniques are now used to eliminate the dead space to reduce the formation of seroma. These include flap fixation with the help of sutures, suction drains, providing compression using a bandage, dissection with the help of ultrasound scalpel, using sclerotherapy, application of tranexamic acid topically and fibrin glue.8-14 In a randomised pilot study, a dose of methylprednisolone succinate was given intravenously (IV) preoperatively to observe the formation of seroma. After MRM, there was reduction in the quantity of seroma production along with postoperative number of seroma aspirations and drainage volume.15

The current study was planned to determine the efficacy of preoperative administration of IV steroids on the formation of seroma after MRM.

The case-control study was conducted at Ward 3, Surgical Unit 1, Department of General Surgery, Jinnah Postgraduate Medical Centre, Karachi, from November 2020 to April 2021. After approval from the institutional ethics review board, the sample size was calculated using W.H.O sample size calculator version 2.0 with 96% power of the test and 95% confidence interval (CI) with margin of error 5%.

As per the literature review Depo-Medrol (Injection 120mg) preoperatively before MRM, showed a reduction in the occurrence of seroma by six percent in the intervention group compared to 18 percent in control group; therefore minimum sample size required for the study is 60.16

All patients were tested for coronavirus disease-2019 (COVID-19) via nasal swab for polymerase chain reaction (PCR) test, and only those with negative results in the preceding 48 hours were included. Pregnancy, known allergy to steroids, weighing <30kg, and patients with significant cardiovascular, pulmonary, neurological, hepatic, renal and metabolic disease, such as those with known diabetes and having uncontrolled glucose levels with a fasting blood glucose level >110mg/dl, known hypertensive with systolic blood pressure (SBP) of >140mmHg, those with ejection fraction (EF) of <40%, with ischaemic heart disease (IHD) and forced expiratory volume for 1 second (FEV1) <70 % of the normal in patients with pulmonary disease as per history and clinical record, were excluded. Patients with metastatic disease were also excluded.

MRM was planned after detailed history, clinical examination, ultrasound or mammographic findings and biopsy. Patients who had ductal carcinoma on histopathology and fulfilled the inclusion criteria underwent MRM and axillary clearance. Preoperatively, after taking informed consent, the subjects were randomly allocated by adopting the lottery method into intervention group A which received 120mg injection methylprednisolone acetate, and control group B which did not receive injection methylprednisolone acetate.

All routine investigations pertinent to the surgery were obtained. In the operating room (OR), 18-gauge cannula was used to maintain the IV line sited under aseptic measures in the hand other than the surgical site hand. Monitoring throughout the surgery was done through electrocardiogram, BP, and oxygen saturation (OSAT). Group A received the depo-medrol injection through an IV line half-an-hour prior to surgery. Conventional general anaesthesia (GA) was induced with propofol and the opioid fentanyl. On completion of the surgical procedure, one drain was placed in the axilla, and the second one in the chest wall over the pectoral muscle was placed before closing the incision. The closed suction drains were removed once they drained <30ml in 24 hours.

The outcome was recorded in terms of the number of days of total drainage, the volume of total drainage in millilitres (ml), formation of seroma, and wound status. Similarly, Group B patients underwent MRM with axillary clearance without preoperative IV steroid administration, and subsequent data was recorded using a predesigned proforma. Data was coded along with demographic details of the patient. Seroma was graded using the Common Terminology Criteria for Adverse Events v3.0, according to which, grade 1 = asymptomatic, grade 2 = symptomatic requiring aspiration and medical treatment, and grade 3 = symptomatic requiring aspiration via radiology.18

To eliminate bias, all confounding variables were strictly controlled by following the exclusion criteria as the same consultant gave GA to all the patients, and all the MRMs were performed by the same surgical team. Patient's body mass index (BMI) and breast cup size were not included. All patients going for upfront surgery and those who took neoadjuvant were included.

Data was analysed using SPSS 25. Data was recorded as frequencies and percentages or as mean ± standard deviation, as appropriate. Independent t-test was applied to calculate the difference between mean values, and p<0.05 was considered significant.

There was a significant difference in the mean total drainage volume and mean duration of drainage between the groups (p=0.001). Seroma formation, seroma grading and wound status were not significantly different between the groups (p>0.05) (Table-1). The efficacy in treatment was high in group A (odds ratio [OR]: 2.78; 95% CI: 0.65-13.94) (Table-2). 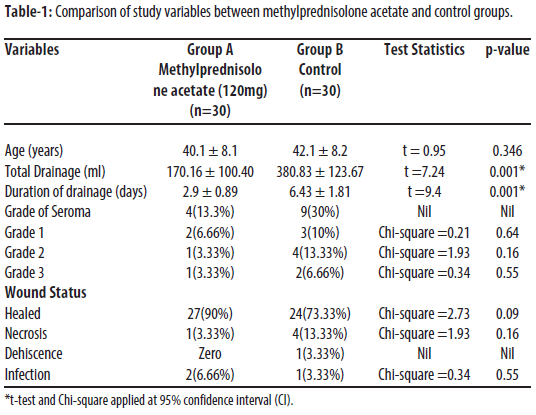 In spite of all the advances in surgical practice, the formation of seroma remains a major and unavoidable problem after mastectomy for breast cancer surgery.19 Formation of seroma have been associated with increased morbidity of the patient. It has also been associated with limitations in movement of the ipsilateral side hand and overall mobility due to the attached drains.20 Surgery induces a systemic inflammatory response characterised by the release of cytokines. Over the subsequent days, there is increased fibrinolytic activity that increases serous fluid. Therefore, the pathogenesis of seroma is assumed to be an accumulation of the exudative phase of the inflammatory reaction showing inflammatory cells, immunoglobulin (IG), and high levels of IL-6.21,22

Steroids can be used to inhibit the inflammatory response to decrease the formation of seroma and possibly improve the patient's wellbeing after mastectomy. They can be used to inhibit the inflammatory process by inhibiting the cytokine function. It was observed that local administration of 80mg of triamcinolone reduced post-abdominoplasty formation of seroma markedly with the decrease in levels of IL-6 in seroma fluid. The suppression of inflammatory markers corresponded clinically with a reduction in seroma accumulation.23 Likewise, the employment of injection triamcinolone in breast reconstruction surgery illustrated that 55% patients did not have formation of seroma. In contrast, 95% developed seroma among those administered with 0.9% normal saline.24

In another controlled clinical trial, women undergoing MRM received a preoperative single dose of 8mg IV dexamethasone 1 hour before surgery. There was low incidence of postoperative nausea, vomiting and pain, improved pulmonary functions, and a reduction in analgesic and antiemetic requirements. Moreover, there was no seroma formation in the intervention group and only one patient had seroma formation in the control group.25 Similarly, a study was conducted for auricular seroma reduction after blunt trauma injury. Seroma was initially aspirated followed by intralesional injection of triamcinolone acetate. This single minimally invasive procedure reduced the recurrence of seroma.26 Likewise, a study, which used 120mg injection depo-medrol before MRM, showed a reduction in the occurrence of seroma by 6% in the intervention group compared to 18% in the control group.27

In the current case-control study, 120mg methylprednisolone succinate was used before MRM with axillary clearance. It demonstrated a reduction by 13% of formation of seroma in the study group compared to 30% in the control group. Moreover, there was decrease in the drain output and the number of days for which there was a need for drainage postoperatively. The drawback was the slightly high incidence of infection 6% due to the use of steroids compared to 3% in the control group.

There were certain limitations to the current study as it did not monitor the size and volume of tumour dissection, patient BMI, the patient-controlled analgesia given, and the instrument used for dissection. Besides, the sample size was small. Further research should considering all these factors to verify and validate the current results.

The use of steroid preoperatively in patients undergoing MRM with axillary clearance can decrease the formation of seroma. It can be used routinely with good wound care and antibiotic coverage for the prevention of seroma postoperatively.