Objective: To evaluate variations in the shape, diameter, length and width of the nasopalatine canal along with the width of the buccal cortical bone anterior to it, using cone beam computed tomography imaging.

Methods: The retrospective, cross-sectional study was conducted at the Aga Khan University Hospital, Karachi, from September to October 2020, and comprised pre-existing cone beam computed tomography scans taken between 2015 and 2020 of patients of either gender aged 18-60 years who had maxillary central incisors present. The shapes and dimensions of the nasopalatine canal were observed along with the buccal bone anterior to the nasopalatine canal. Data was compared with respect to age and gender. Data was analysed using SPSS 23.

There are several important clinical considerations associated with NPC.1 Firstly, the incisive foramen serves as a landmark for the incisive nerve block, which can anesthetise six maxillary anterior teeth, a useful technique for restorative dental procedures.1 Additionally, this canal is associated with the nasopalatine cyst, which is the most common non-odontogenic cyst of the oral cavity.1 It is important to note that the nasopalatine cyst is liable to being misdiagnosed as an endodontic pathosis when the normal variations of the canal anatomy are not considered.1,2 Moreover, the NPC is of considerable importance when dental implants are placed in the anterior maxilla.3 Dental implants are commonly used to replace missing maxillary central incisors, which is a highly demanding area with respect to aesthetics.3 A commonly encountered challenge while placing the dental implant in the anterior maxilla is the increased risk of perforating the NPC,1,3 which may cause intraoperative haemorrhage and transient sensory alterations of the anterior palate.4 However, a more serious problem is encountered when the implant surface contacts the soft tissue contents of the NPC, instead of being surrounded by sound bone, thereby compromising osseointegration.4 To counter this problem, procedures including enucleation, insertion of a bone graft, guided bone regeneration (GBR) or positioning of the implant directly into the canal have been suggested in literature.5-14

Considering the need for surgical interventions, a classification of the morphology of NPC was suggested by Bornstein et al.11 They observed that the canal may exist as a single connection between the oral and nasal cavities, as two separate canals, or as variation of the Y-shape. Additionally, they suggested that a single NPC is most favourable for the aforementioned surgical interventions, such as bone grafting and surgical enucleation.11

Literature has highlighted the need to better understand the morphological and anatomical variations of the NPC with respect to surgical interventions.7-11 Recently, with the advent of cone-beam computed tomography (CBCT), a three-dimensional (3D) understanding of anatomical variations has become possible.7 As a result, studies have consistently shown variations with respect to age, gender and ethnicity.7 Al-Amery et al. observed the shape and dimensions of the NPC which varied significantly with respect to gender, age and ethnicity.6 Hakbilen et al. concluded that more care should be taken in females, elderly and edentulous patients in the intervention of this area.12 However, as per our knowledge, these ethnic variations have not been accounted for in the Pakistani population. Therefore, the current study was planned to fill this gap by evaluating the dimensional variations of the NPC (shape, diameter and length) along with the width of the buccal bone on CBCT scans.

The retrospective, cross-sectional study was conducted at the Aga Khan University Hospital (AKUH), Karachi, from September to October 2020, and comprised pre-existing CBCT scans taken between 2015 and 2020 of patients of either gender aged 18-60 years who had maxillary central incisors present. Data was collected using non-probability consecutive sampling technique from the departments of Oral and Maxillofacial Surgery, Orthodontics and Operative Dentistry and Endodontics after obtaining exemption from the institutional ethics review committee. Scans with artifacts, impacted teeth, severe malocclusion, pathology of the premaxilla (cyst, tumour, cleft palate), pathology of the central incisors (radiolucency, radioopacity, root resorption) and surgical intervention in the premaxilla were excluded.

The sample size was calculated using the World Health Organisation (WHO) calculator while using mean NPC diameter 3.85±1.32mm.6,15 Absolute precision was set at 30% and confidence level at 95%. The sample size was inflated by 20%.

Demographic data was retrieved using medical record number. All CBCT scans had been carried out using the ORTHOPHOSXG 3D ready/CEPH (SIRONA XG 3D) operating at 60 kV-90kV/ 3mA-6mA, image volume 8x8cm, the voxel size was 0.2mm, scanning time was 14 seconds and exposure time was 2-5 seconds. The images of the scans had been saved in digital software SIDEXIS XG 2.63 (Sirona Dental Systems). The images of scan were viewed using GALAXIS version 1.9 (SICAT GmbH & Co. KG, Bonn, Germany) on a desktop monitor HP (Hewlett-Packard) Elite Display E271i 27-inch IPS (In- Plane Switching) LED (Light Emitting Diode) backlit monitor, with the resolution of 1920 x 1080 at 60Hz in a well-lit room with contrast static 1000:1, and dynamic 5,000,000:1. All the measurements were taken once by the primary investigator. The same scans were then re-evaluated by another investigator under the same conditions. Both measurements were noted down on separate proformas.

The centre of the canal was first located in the axial view. This point was simultaneously visualised in the sagittal image window. All measurements were taken on this sagittal section. 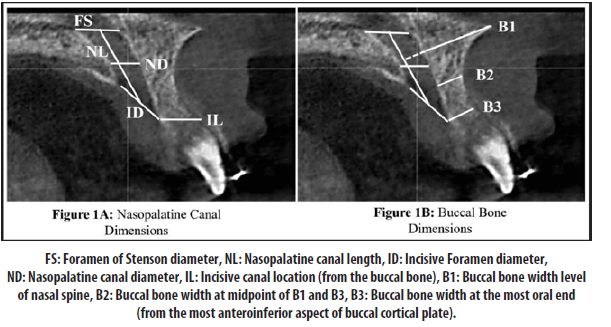 The shape of the NPC was evaluated according to a classification by Bornstein et al., in a coronal view (Figure-2).11,17 To determine the appropriate coronal section (frontal view) of the canal, the "slider tilt" tool was used to alter the axial inclination of the canal on the sagittal image section until a coronal slice showing the entire length of the canal was observed. The canal was then classified in the coronal view as a single canal, Type A; two parallel canals, Type B; or a variation of the Y-type of canal, with one oral opening (incisive foramen) and two or more nasal openings (foramina of Stenson), Type C.

The diameter of the incisive foramen and foramen of Stenson decreased with increasing age, while the NPC length and diameter appeared to increase with increasing age even though none of the age-related differences were statistically significant (Table-2). 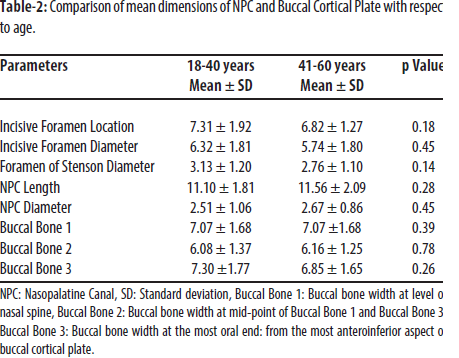 The roots of the maxillary incisors are usually closely approximated to the NPC, which necessitates the use of 3D radiographic evaluation in this anatomical region for the planning of procedures, such as dental implant placement.4 The findings of the present study emphasised the importance of the NPC and its variations in Pakistani population.

Since the anterior maxilla is an aesthetically demanding area, it poses its own challenges to the clinician. Placing the implant in the ideal position may breach the integrity of NPC.4,18 Alkanderi et al. evaluated the risk of NPC perforation on CBCT scans by placing virtual implants to replace maxillary incisors in the ideal aesthetic location.13 They concluded the risk to be 8%, of which 28% perforations were avoided by placing smaller implants.13 Moreover, several attempts have been made to use the NPC as a buttress for implant insertion after the enucleation and augmentation of the canal.8 Considering the nature of this surgical intervention, Bornstein et al. deduced that a Type A canal allows for most predictable surgical outcomes.8,11 In the present study, Type A canal was most frequently observed, followed by Type C. There were no Type B canals observed. This was similar to the results of Bornstein et al. and Sekerci et al.11,19 However, Khojastepour et al. and Safi et al. found Type C canals to be the most common, followed by Type A.7,20 These differences can be attributed to the ethnic variations in NPC morphology.

Moreover, in the current study, both the length and the diameter of the NPC was significantly greater in males than females, which is in line with observations noted in other studies.6,7,13 In the present study, the buccal cortical plate was assessed at three levels, all of which showed a wider measurement for males than females, but this difference was significant only at the mid-level of the buccal plate. Some studies found no significant difference in the buccal bone width of males and females.14,16,21 However, others reported a significantly wider buccal bone in males than in females.11,7,6

The resent study reported no significant difference in all the parameters assessed with respect to age, which was also observed in previous studies.16,20,22 However, one study reported a significant increase in the diameter of the NPC and its nasal and palatal openings with increasing age.11 Additionally, a significant decrease in buccal bone dimensions with age was observed, which the authors attributed to bone resorption from the lingual aspect of the buccal cortical plate.11 However, this difference may be attributed to the inclusion of both edentulous patients, rather than as a result of a true age change. The current study was restricted to dentate patients, since immediate implant placement is preferred in the anterior maxilla.

Mraiwa et al. and Mardinger et al. used computed tomography (CT) to evaluate the morphological variations in NPC,16,21 whereas CBCT scans were used in the current study. The similarity in the results highlights the effectiveness of CBCT as an imaging tool, which has the advantage of a lower radiation dose exposure than CT scans. Although ethnic variations of canal morphology are likely, a lack of standardisation of imaging positions during assessment may also have led to differences amongst studies using CBCT images. Therefore, the current study describes the process of selecting the sagittal section, allowing for a more transparent and repeatable methodology. Additionally, the anterior nasal spine, a fixed anatomical landmark, was used as a reference point to standardise the measurements on CBCT sections, which adds to the strength of the study.

The current study has its limitations as it was done at a single centre. Additionally, the inter-racial variations within the population were not accounted for.

Despite the limitations, the current study is the first to demonstrate the morphological and dimensional variations of NPC in a Pakistani population. Considering the findings related to NPC variations, a pre-operative CBCT evaluation of NPC is recommended before surgical intervention.

Disclaimer: The Abstract was presented in the Poster session at the International Association for Dental Research (IADR) General Session, 2021 which was held virtually.