Evaluation of organ weights and ventricular thicknesses in electrocution related deaths based on autopsy reports: A biophysical approach

Objective: To evaluate autopsy reports of the deaths due to electrocution in terms of body mass index, body surface area, and organ weights with a biophysical perspective.

Method: The retrospective study was conducted in Malatya, Turkiye, and comprised autopsy reports of electrocution cases that were obtained from the local branch of the Council of Forensic Medicine related to the period from 2012 to 2019. Organ weights and ventricular thicknesses were compared in terms of body mass index and body surface area. Electrical marks were also evaluated in detail. Data was analysed using SPSS 18.

Results: Of the 45 cases, 36(%) were male and 9(%) were female. The overall mean age was 39±13 years (range: 20-71 years). There were no significant differences in organ weights and ventricular thicknesses in different body mass index groups (p>0.05). The weights of head and heart were significantly different in relation to body surface area (p<0.05), but no significant difference were found for other organs and ventricular thickness (p>0.05).

Conclusion: Comparing the organ weights in electrocution autopsies to normal organ weights may help decide the cause of death. During autopsy, electrical marks should be evaluated by considering the characteristics of the electrical current.

Electricity is an indispensable part of modern life, and therefore we accept the danger that comes with it. Electric shocks due to both occupational and home accidents cause serious injuries and even death.1 Beyond the successful treatment of burns caused by electric accidents, it can be difficult to make decisions in autopsy evaluations of deaths due to electrocution. While it is necessary to evaluate the entrance and exit marks due to the flow of electrical current during autopsy, these marks may be invisible or indistinct.2 Burn marks on the body occur in all victims exposed to high voltage, but only in 50% of low-voltage electrocution cases.3 Therefore, in some cases it may be difficult to draw conclusions about the cause of death. Considering the nature of electric current and its biophysical effects on the human body during the autopsy examination might be helpful.

It is known that the effects of electric current on the human body depend on voltage, type of current, amount of current, resistance, pathway of current, and duration of contact.3,4 When electrical accidents occur, the electric current runs through the body from the contact area through the ground by following the shortest path. Most commonly, the path is from hand to foot or hand to hand. The time necessary for a current to cause death depends on the amperage.3 The amount of current can be calculated from Ohm's Law: Current = Voltage/Resistance (I = V/R).5

Organs have different levels of resistance to electric current. While the highest resistance is shown in bones and adipose tissue, low levels are found in the blood, lungs, heart and muscle tissues.6 Thus, exposure of different parts of the body to the same voltage will generate different currents. For example, the skin resistance value, which is high in dry skin, may decrease owing to sweating, wetting or humidity.4 In this case, the conductivity increases and the intensity of the electric current passing through the body under the same voltage also increases.

Adipose tissue, a relatively poor conductor, is one of the tissues with the highest resistance, and an increase in its amount may be one of the factors that increase tissue and skin resistance.7 When skin resistance is high enough, electric current may cause skin burns and injuries through the body. Thus, due to the passage of electric current into the deepest parts of the human body, the resulting heat production may lead to severe damage to internal organs.5 The greater the product of the square of the current and the resistance, the sooner the current is more likely to cause burns.

To our knowledge, no study has been conducted on the organ weights of those dying of electrocution in Turkey. The current study was planned to fill the gap using biophysical approach by classifying postmortem organ weights and ventricular thicknesses in relation to body mass index (BMI) and body surface area (BSA).

The retrospective study was conducted in Malatya, Turkiye, and comprised autopsy reports of electrocution cases that were obtained from the local branch of the Council of Forensic Medicine related to the period from 2012 to 2019. Deaths due to other reasons, such as lightening, trauma and organ anomaly, were excluded.

Postmortem pathological findings of organs, such as hyperaemia and haemorrhage, were evaluated.

Data was analysed using SPSS 18. Data normality was examined using Shapiro-Wilk test. Differences between the groups were evaluated using one-way analysis of variance (ANOVA) with Bonferroni correction. Multiple linear regression analysis by fitting a linear regression with a stepwise approach was performed to model the relationship of organ weights and ventricle thicknesses with BMI and BSA values. P<0.05 was considered statistically significant.

The weights of internal organs and ventricle thickness were noted (Table-1). When the sample was categorised into BMI normal, overweight and obese categories, there were no significant differences (p>0.05). Unlike other victims, the scalps of overweight and obese victims were found to be hyperaemic and haemorrhagic, with a large amount of frothy fluid pouring out of the lungs, implying that in obese and overweight people, the thermal effect may be more harmful than the direct effect of electric current (Table-2). 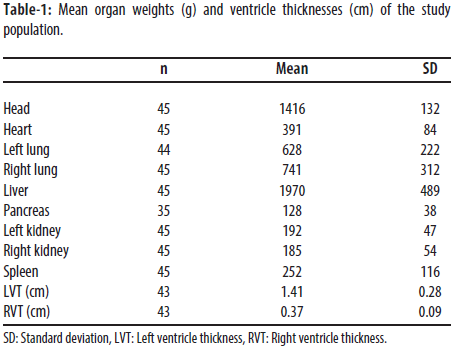 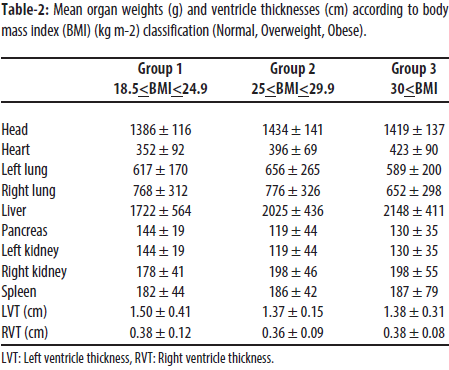 Except for the left kidney (R2= 0.12; p=0.02), no significant relationship between organ weights and ventricular thickness was found in linear regression. 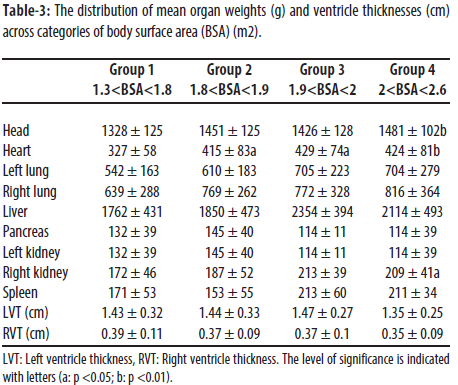 Most electrocution cases are accidental and are responsible for a significant number of deaths in the adult population.16 Between May and October, the air temperatures in the region rise above the yearly average when weather conditions were most favourable for the highest level of outside activity. Considering the annual average temperature change for the region where the study was conducted and for Turkiye in general,17 the number of cases increased in accordance with other studies.18,19 Thus, the increased number of cases during these months may be explained by a decrease in skin resistance due to humidity and increased temperatures.

Autopsy reports in the current study were carefully evaluated by considering the BMI categories of normal, overweight and obese. In overweight and obese victims, unlike others, the scalps were hyperaemic and haemorrhagic, and the lungs were filled with foamy fluid. This can be explained by the increase in the amount of adipose tissue, thus increasing the electrical resistance of the tissue and the thermal effect becoming more pronounced. Since the percentage of fat was not evaluated in the study, it remains unclear as to what degree the amount of fat tissue contributed to the electrical resistance. To our knowledge, there is no study evaluating electrocution deaths using this approach.

In literature, BSA was found to be strongly correlated with percent fat22 and it has been found that the pancreas, spleen, brain, heart, lungs, and kidneys were positively correlated with BSA as well as BMI.8,23

In the current study, only the right kidney weight was positively correlated with BSA. However, head and right kidney weights were higher in BSA group 4 compared to group 1. For the heart tissue, the weight was higher in BSA groups 2, 3 and 4 compared to group 1. This distribution of weight across BSA groups may be affected by the result of regression analysis. To our knowledge, no earlier data was available comparing organ weights of electrocution autopsies in accordance with BMI and BSA classification. The present evidence relies on its own findings and analysis. Further research is needed to confirm the current findings.

When evaluating cases where the exact cause of death is suspected to be electric shock, it is important to remember that overweight and obese individuals will have a high body resistance due to excess adipose tissue as well as internal haemorrhage and organ damage due to thermal effect.