Objective: To assess the perceptions of 2nd year medical students regarding certain approaches introduced in the course of Nutrition and Metabolism module.

Method: The descriptive study was conducted at the Shifa College of Medicine, Islamabad, Pakistan, in December 2020, and comprised all 2nd year medical students who completed the Nutrition and Metabolism module in which new components had been added, including introduction to community nutrition, school visits, Islamic perspective of nutrition, journal club and e-posters. Data was collected using a questionnaire based on the modified Dundee Ready Education Environment Measure, and had 5 categories with a total of 25 questions that were scored on a 5-point Likert scale. Data was analysed using SPSS 22.

Conclusion: The perceptions medical students about innovations were positive, showing an encouraging attitude in terms of learning approach and outcome.

Nutrition and metabolism1 are key components of the Clinical Biochemistry curriculum. They form the basis of all the metabolic processes occurring at the cellular level in the human body, and it is necessary for medical students to correlate it clinically for a better understanding at an earlier level. Innovative curriculum development2 leads to a learning experience with substantially better learning outcomes. Such innovations in the course of Nutrition and Metabolism are essential for strengthening students' knowledge of the subject matter, and their ability to correlate the theoretical knowledge with the clinical. It is also imperative to assess the outcomes to be sure of the efficacy of such interventions.The Dundee Ready Education Environment Measure (DREEM)3 is a well-known, highly reliable diagnostic inventory based on a 50 statement questionnaire used to assess the students' perceptions about the educational environment. However, the questions in the 5 domains already established through DREEM need certain amendments according to the specific modalities introduced by an institution.4,5

A number of studies have been conducted based on DREEM which assessed the students perceptions regarding the educational environment in medical schools. However, to our knowledge, no study has yet been done either in relation to nutrition and metabolism module or the biochemistry curriculum on the basis of DREEM or modified DREEM criteria.

The current study was planned to fill the gap by assessing the perceptions of medical students regarding certain approaches introduced in the relevant course module.

The descriptive study was conducted at the Shifa College of Medicine (SCM), Islamabad, Pakistan, in December 2020. After approval from the institutional ethics review committee, the sample was raised using non-probability convenience sampling technique. Those included were 2nd year medical students of either gender who had completed the Nutrition and Metabolism module in which new components had been added. Informed consent was obtained from all the subjects and those who refused to participate were excluded. The new course components included introduction to community nutrition, school visits, Islamic perspective of nutrition, journal club and e-posters.

Introduction to community nutrition6 helps in the promotion of good health through food and nutrient intake at the community level. This enables the students in developing competencies for public health and community nutrition programmes.7 School visits under the supervision of Community Medicine Department were arranged for the students in which they interacted with children and got to know about the common health problems present among school-going children related to poor nutrition, and nutritional counselling was also done. Based on this insight, the students were expected to be able to understand the nutritional problems of all age groups and guide them, especially the vulnerable groups, in their professional lives. Working at the community level in the field through school visits broadened their exposure and the students were able to practice the skills incorporated in the module, like general physical examination, anthropometry, growth charts and body mass index (BMI) calculation on the general population.

Nutritional counselling8 along with the making of diet plans with special emphasis on physiological stress needing high nutritional demands, like during pregnancy and lactation phases, was introduced for the development of knowledge, competence and the ability to address nutrition problems. Large-group interactive sessions were scheduled in which nutritional needs during pregnancy and lactation were highlighted. Sessions in the form of small batches were incorporated in which students practised nutritional counselling in the form of role plays.

The introduction of the Islamic perspective of nutrition9 in the curriculum was aimed at highlighting the importance of a healthy diet and the concept of maintaining equilibrium with respect to our religion. Ethical issues regarding genetically modified food10 along with its pros and cons were discussed with the students in the form of large-group interactive sessions.

The idea of the journal club11 is to introduce the element of research. This helps the students in understanding the concept of literature search and article review.12 The article selected was based on the use of artificial intelligence (AI) for weight-loss among overweight and obese adults. The article was provided beforehand to the students and was discussed in detail in small group discussion (SGD) sessions.

Besides, e-posters13 were assigned to the students in 16 groups with proper prior guidelines each having a different topic and at the end of the module all the groups presented their e-posters. The focus of all the topics assigned were to inculcate the principles of nutritional management of various metabolic and nutritional disorders. This encouraged the students' minds towards creativity and innovation in today's growing digital and research-oriented world, and broadened their horizons with reference to international conferences.14

Problem-based learning (PBL),15 a well-known approach, was also incorporated in this module in order to impart knowledge regarding enteral and parenteral nutrition. For this purpose, both the departments of Basic Sciences and Clinical Sciences16 collaborated to formulate a clinical case scenario. Two PBL sessions were conducted with a gap of 1 week, followed by a final session where all the batches wrapped up the case scenario in the form of power point presentations.

Formative quiz was also incorporated in order to encourage the students to actively participate and to get acquainted with team management skills without the fear of marks (weightage) in their final exam of the module.

A modified criterion based on DREEM was used for data collection and assessment. Originally, DREEM is a 50-statement questionnaire divided into five categories; student's perception of learning (SPL), student's perception of teachers (SPT), student's academic self-perceptions (SASP), student's perceptions of atmosphere (SPA), student's social self-perceptions (SSSP).17 The modified DREEM comprised 25 items spread over the same 5 domains. It was scored on a 5-point Likert scale from 0=strongly disagree to 4=strongly agree. The broad domains were kept the same as the original DREEM questionnaire which is already a validated instrument. Modifications were done systematically while keeping the main structure of the criteria intact. Changes were done in the items according to Biochemistry subject's requirement in terms of learning innovations. For instance, in the SPL domain, items were based upon students' perception regarding case-based learning, journal club initiation, nutritional counselling sessions along with ethical issues related to genetically modified food, community visits and e- posters. In the SPT domain, items were amended on the basis of students' perception regarding teaching skills and methodologies. In SASP, students' perception were assessed on the basis of the academic progress made by imparting the innovative strategies. In SPA, students' perception regarding the learning environment were assessed, while in SSSP, students' perception regarding their active participation during sessions was assessed. On the other hand, the items in the original DREEM criteria were based entirely upon the learning environment. Post-modification, there were 13 questions in SPL, 3 in SPT, 4 in SASP, 3 in SPA and 2 in SSSP. The maximum total score of all the 5 categories was 100 (25 × 4) wherein 0-25, 25-50, 50-75 and 75-100 interpreted as very poor, plenty of problems, more positive than negative and excellent respectively. Mean scores of each question was calculated for all the students. Percentages were calculated for each domain by adding all the means and dividing them by the total of all mean scores of questions. Scoring of each domain was then compared with the guide for domain score (Ture). Face validity of the questionnaire was done by a professor and an assistant professor from the Biochemistry Department since majority of the content of the module was from Biochemistry. 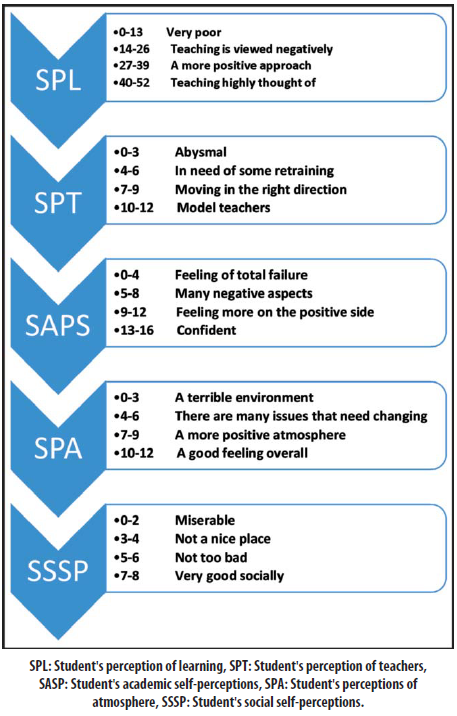 The questionnaires were distributed by one of the researchers at the end of the module. Each questionnaire took 5-7 minutes to be filled and was collected by the same researcher. After the collection of the questionnaires, each participant was allotted a specific number to maintain confidentiality. Data was analysed using SPSS 22. 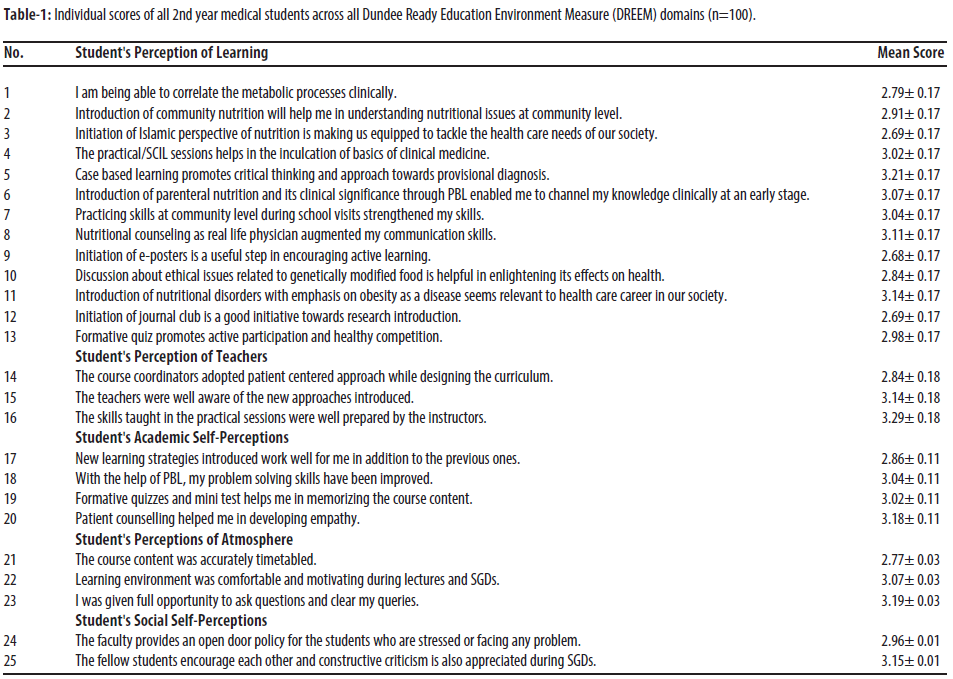 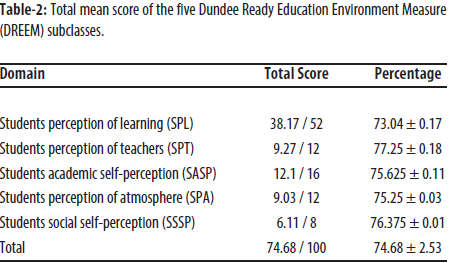 The current study aimed at determining how the students experienced their educational environment. For an optimal study environment, teachers as well as students along with the social atmosphere play an integral part.

The overall score in the current study range 51-75 which was more positive than negative. Highest percentage was obtained for the SPT domain (77.25%) and the lowest for the SPL domain (73.04%) which depicted that the students were more satisfied with the teaching methods and learning strategies, which was in line with a study carried out in India. The rest of the domains were better compared to those reported by an earlier study.22

In the SPL domain, item 5 scored highest which depicted that the students were more receptive to student centric clinical-based strategies.

Items 3, 9 and 12 were scored among the lowest which showed lesser inclination towards these relatively newer approaches. The elements of e-posters and the journal club demanded more creativity from the students which played a transitive role from traditional learning to active learning along with research introduction. This was probably one of the reasons behind their lesser interest.

In the SPT domain, item 16 was scored the highest by the students which showed satisfaction with teaching methodology. Item 14 was scored relatively lower in this domain. There might be a possibility that uniformity among the instructors while inculcating the patient-centric approach in the subject matter was variable.

In the SASP domain, item 20 was scored the highest that portrayed a positive impact of counselling sessions introduced in the module. Item 17 was scored relatively lower which might be due to lesser adaptability on students' part related to newer strategies.

In the SPA domain, item 23 received the highest score which indicated an open, insightful and congenial environment for students' queries. Item 21 received relatively lower score, indicating there was a margin of improvement in terms of time slots provided for this module of 4-week duration.

The limitation of the current study is that it was done at a single centre. Due to non-uniformity of curriculum and its delivery mechanism, however, it was not possible to carry out the study in different medical institutions.

Total score indicated that the students perceived the innovations positively, showing an encouraging response towards learning approach, outcome and attitude.