Objective: To assess the beliefs about causes of psychotic disorders and subsequent help-seeking behaviour in caregivers.

Method: The descriptive cross-sectional study was conducted at the Department of Psychiatry, Civil Hospital, Karachi, from September 2020 to February 2021, and comprised caregivers of patients with psychotic disorders. Data was collected using a questionnaire that was filled up by caregivers mentioning their beliefs about the cause of the disorder and subsequent help-seeking behaviour. Data was analysed using SPSS 22.

Conclusion: There was found to be sufficient awareness among the caregivers, but help-seeking behaviour needed to improve considerably.

Psychotic disorders involve extreme psychological instability portrayed by central unsettling influences in considerations, feelings and observations, and schizophrenia specifically is among the most difficult and exorbitant illnesses in the world.1 Psychotic patients place a considerable burden on the psychological wellbeing conveyance framework through incessant handicap, social brokenness, hospitalisations, substance misuse and by and large poor consistence.2 Psychotic disorders force immense financial effects on people, families, and networks. Besides, the families and parental figures of patients having psychotic disorders additionally bear the burden of the socioeconomically deprived conditions.3

If individuals are viewed as responsible for their sickness, they might be judged adversely and may not get the help they deserve. In contrast, if the reason for the disease is viewed as external, the perception and response change accordingly.

A study conducted in Karachi, assessed the perception of causes behind schizophrenia and the ensuing help-seeking attitude. Only 30% of subjects ascribed psychological sickness as the fundamental driver of psychotic symptoms, while other causes cited were God's will (32.3%), superstitious thoughts (33.1%), loneliness (24.8%) and unemployment (19.3%). With respect to help-seeking, of 40% subjects said they would go for psychiatric consultation, 9.5% spiritual healing, 10.6% would go for social change, and 14.8 % would sit idle. Among the respondents, 62% were graduates and 50% were jobless.4 Another study with respect to magico-strict convictions in schizophrenia was conducted in Chandigarh, India, in 2000, and comprised family members of 40 patients with schizophrenia who filled up the Supernatural Attitude Questionnaire. Overall, 23(57%) respondents had convictions about different otherworldly wonders and their patients had experienced magico-strict treatment.5 In another Indian study, 12% of family members living with 254 chronic schizophrenia patients cited heavenly cause. Psychosocial stress, character deformity and heredity were also expressed by numerous individuals.6 A 1996 review demonstrated that family members will normally investigate natural factors when looking through the reasons for schizophrenia. The overall population will in general refer to psychosocial factors, particularly stress-related factors.7 Another study in this regard was done at Emory University Atlanta, Georgia, in 2008 with respect to reasons for schizophrenia as detailed by urban African-American lay Community individuals.8

The current study was planned to assess the beliefs about psychotic disorders and subsequent help-seeking behaviour among caregivers in an urban setting.

The descriptive cross-sectional study was conducted at the Department of Psychiatry, Civil Hospital, Karachi, from September 2020 to February 2021. After approval from the ethics review board of the Dow University of Health Sciences (DUHS), the sample size was calculated using the Formula9: n =       z2 x p (1-p)

The sample was raised using the non-probability consecutive sampling technique. Those included were caregivers of psychotic disorders, such as schizophrenia, delusional disorder and acute and transient psychotic disorder patients. The caregivers were close relatives, friends or anyone living with a patient and/or taking care of the patient. They were enrolled regardless of gender, were aged 18-60 years and belonged to different religions and different educational and professional backgrounds.

After taking informed consent from the subjects, data was collected using a questionnaire consisting of three sections. The questionnaire was filled up by the caregivers after it was explained to them in detail.

The first section related to socio-demographic details, such as age, gender, employment, level of education and language. The second section was about their perception of the cause of the disorder, while the third section explored the help-seeking behaviour of the caregivers.

Data was analysed using SPSS 22. Chi-square test was used for to compare the data along gender lines. P<0.05 was considered statistically significant. 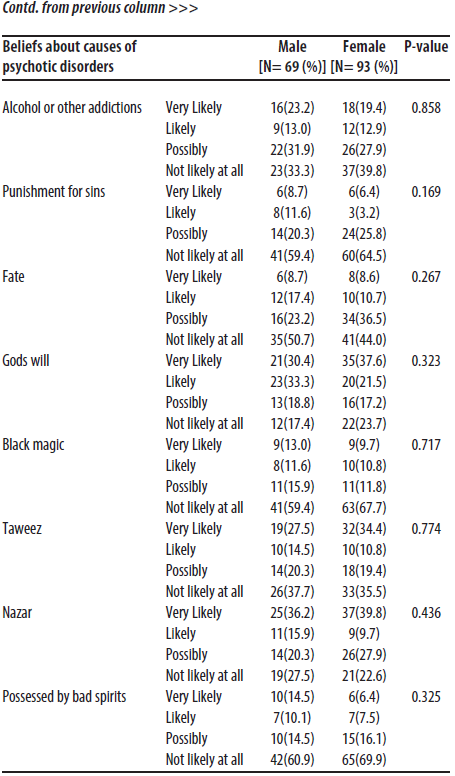 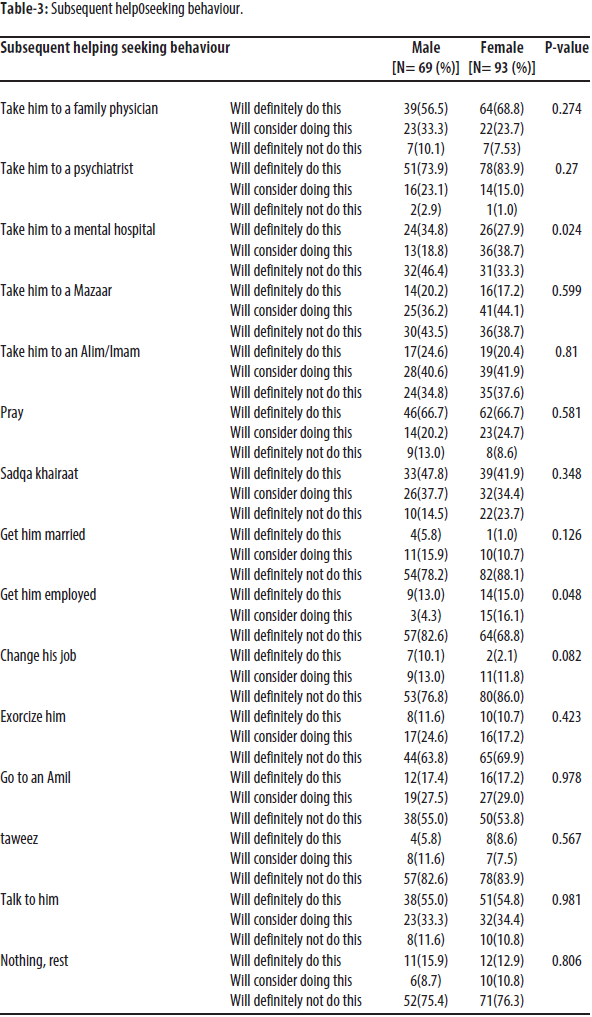 In the current study, 34.6 subjects cited God's will as the most likely cause if psychotic disorders, which is comparable with previous studies conducted in India and Pakistan.4,10 Some studies from India showed magico-religious phenomenon (black magic) reported by over 70%, but the study was conducted in a remote village with a population of nearly 0.3 million in southern India.11 A separate study from the metropolitan city of Chennai, a state capital with population over 5 million, found that only 12% families reported a supernatural causation of schizophrenia.12 The findings of the current study are consistent with those of a 2020 study conducted in Assam, India.13 The help-seeking behaviour in the current study was to take the patient to a family physician or to a nearby psychiatrist. In contrast, an Indian study showed that psychiatric help was sought by 71.2%, while only 14.8% sought faith-healers' help.14 A recent study in Turkey showed that psychiatric help-seeking behaviour was seen in 76% and 54% subjects in the same study that was conducted in two separate provinces.15 Another study in Turkey showed that 74% patients sought help from religious sources for their mental illness.16 In another study, a very small number of patients considered the biological cause17 which was found in the current study as well. Pakistani community generally exhibits negligible to little understanding regarding psychological experiences and emotional processes as separate identifiable entities. This is also comparable with the current study. A study conducted in Lahore, Pakistan, showed that the perceived cause of schizophrenia included stress of social issues (23.3%) and God's will (16.51%), while 54.3% of patients reported a combination of medication and spiritual healing to be the help-seeking/treatment choice. A good number of patients believed that the illness was the result of some magical spell cast by someone. Nonetheless, multiple parallel sociocultural concepts, such as religion or faith-driven practices and mythical or supernatural understandings, are accepted and practised in order to address mental health problems.18 In a recent study, stress, family problems, lack of friends and financial worries were endorsed strongly by patients as the cause of their mental illness,19 while the current study reported anxious personality, evil eye, marital issues, and God's will as the main reasons of being mentally ill.

The current study has limitations as this is a hospital-based study and the findings, as such, cannot be generalised in community terms. There are shortcomings related to face validity epidemiological constructs that change over the course of time.

Beliefs about the causes of mental illnesses indicated better awareness at the caregivers' level, but subsequent help-seeking was not based on appropriate knowledge.

Acknowledgement: We are grateful to Professor Dr. S. Haider Naqvi, (Chair and Head of Department, for his support and encouragement.