Objective: To compare the efficacy of primary versus secondary closure of stoma reversal skin wound in terms of wound infection.

Method: The study was conducted at Surgical B Unit of Ayub Teaching Hospital, Abbottabad, Pakistan, from January 1 to December 31, 2020, and comprised adult patients of either gender undergoing stoma reversal. The patients were randomised into primary closure group A and secondary closure group B. Surgical procedure was similar in both the groups except the skin closure technique. In group A, skin was closed with interrupted polypropylene sutures, while in group B, wound was dressed with saline-soaked gauze daily using aseptic technique and was allowed to heal by secondary intention or delayed primary closure later on. Postoperatively, the wound was assessed for infection till 30th postoperative day or complete wound healing. Data was analysed using SPSS 16.

Intestinal stoma is either a temporary or permanent surgically-created opening of bowel onto the body surface  for the diversion of bowel contents when primary anastomosis is not suitable.1,2 The primary goals for stoma-formation are maintaining effective decompression of gastrointestinal tract (GIT) or securing distal bowel anastomosis, in the management of diverticulitis, inflammatory bowel disease, colorectal carcinoma, perforations secondary to trauma, faecal diversion for an open perineal wound or in palliative situations. These temporary stomas are used to alleviate septic complications from anastomotic leaks and to avoid the need for reoperation.1-4 Stoma itself carries complications, like bleeding, dehydration leading to acute kidney injury, necrosis, retraction, prolapse, stenosis, parastomal hernia and peristomal skin complications.1,2 Stoma reversal is usually done after 6-12 weeks to allow inflammation from the first surgery to settle, stomal orifice to mature, and adhesions to soften.5

The RCT was registered at clinicaltrials.gov. Clinical trial number is NCT04785404.

The study was conducted at Surgical B Unit of Ayub Teaching Hospital, Abbottabad, Pakistan, from January 1 to December 31, 2020. After approval from the institutional ethics review committee, the sample was raised by enrolling all adult patients of either gender undergoing ileostomy or colostomy reversal. Patients with co-morbidities, like diabetes, chronic kidney disease (CKD) and chronic liver disease, those having stoma reversal through laparatomy, and those with post-operative anastomotic leak were excluded. Written informed consent was taken. The subjects enrolled were randomised into two equal groups of primary skin closure group A and secondary skin closure group B using blocked randomisation by creating permuted blocks of 6, like ABABAB.

Elective stoma reversal was performed a minimum of 6 weeks after the primary procedure. Closure of stoma was preceded by contrast radiographic examination (distal loopogram) to evaluate distal bowel integrity. Patients were admitted a day before surgery and kept on clear fluids and a solution of polyethylene glycol was utilised with distal stoma wash with 1 litre normal saline for bowel clearance. Injection ceftriaxone 1gm and injection metronidazole 500mg were given intravenously (IV) before the start of the procedure. The same surgical team performed stoma reversal in both groups using the same technique. Skin was disinfected with 10% povidone-iodine. Surgical technique included an elliptical incision around the stoma. Upon mobilisation of the bowel loops, anastomosis was done with suture using single-layer extra-mucosal interrupted repair. The sheath was closed with continuous polypropylene sutures. In group A, skin was closed with simple interrupted sutures, using polypropylene 2\0. In group B, skin was not closed; rather the wound was lightly packed with saline-soaked gauze daily using aseptic technique for healing by secondary intention or delayed primary closure later on. Until the discharge of patient, the wound was observed daily and after discharge weekly in both groups for 4 weeks. The wound was assessed for infection according to the criteria of the United States Centres for Disease Control and Prevention (CDC)15 till 30 days post-operatively or until complete healing of the site (Table-1). 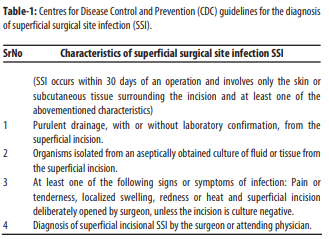 Data was collected using a predesigned proforma. The control of bias and confounders were done by strictly implementing the exclusion criteria. Data was analyzed using SPSS 16. Continuous data was represented as mean with standard deviation (SD) and categorical data as frequencies and percentages. Chi-square test was used to analyse categorical data. P<0.05 was considered to be statistically significant. 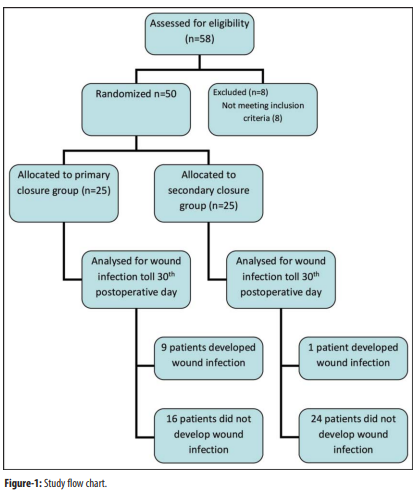 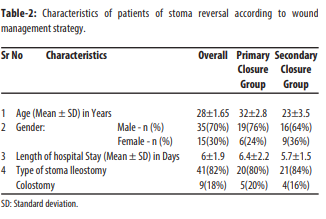 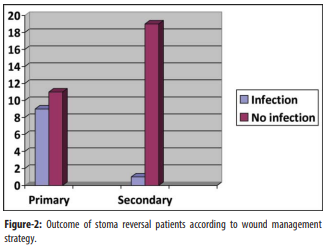 Based on the results, the statistical power of the current study was 89%.

The current study found the most common cause of stoma formation to be intestinal perforation due to RTA (20%), followed by firearm injury and typhoid perforation (16% each). Similar results were found by local studies.16 But others found colorectal neoplasms to be the most common cause for stoma formation.17 Mean LOS duration in primary versus secondary closure (6±1.9 vs. 5.7±1.5) was comparable to other studies as well.7

Rate of wound infection after ileostomy versus colostomy reversal was not statistically significant, and the findings corroborated those of several other studies.7,10,11 As both ileostomy and colostomy skin wounds harbour skin microbes at the time of surgery, both may be equally susceptible to infection.10 The current study further stratified the frequency of wound infection in relation to gender and LOS and did not find statistically significant differences. Similar findings have been reported in other studies.20-22

The limitation of the current study is that it did not estimate the sample size owing to paucity of resources as well the low workload of the surgical unit. However, statistical power calculated on the basis of the results was 89%, which is appropriate.