Weight gain and Thyroid in women: The coexisting confounders

Hypothyroidism and obesity are common coexisting illnesses which have an impact on each other. Data from India suggests that about a third of individuals with obesity have overt hypothyroidism and about one-tenth have subclinical hypothyroidism. Multiple mechanisms have described how both thyroid and obesity could have a significant impact on each other.  A moderately elevated TSH, elevated T3 and a lower T4 is classically described thyroid dysfunction in patients with obesity. This article will detail the epidemiology, pathogenesis and the clinical implications of weight gain and thyroid dysfunction with a special focus on women.

Globally, women’s health is an important index of social integrity and health of the society. Women in India, conventionally play a major role in determining the well-being of the family and often ignore their own health in the process of maintaining their health and professional work-life balance. With changing times and limited physical activity coupled with an ease and abundance of high energy food, obesity has reached pandemic proportions worldwide, especially so in women. An increase in stress and change of cultural habits have resulted in its increasing prevalence. Data from the United States reveal that almost two-thirds of their population is overweight or obese.1 In a recent report by the World Health Organisation,2 women with obesity have doubled world over and this has led to a concomitant increase in cardio-metabolic disorders like diabetes and hypertension. More recently emerging data from India suggests that the prevalence of obesity has rapidly increased in women from 23% to about 36% in the last decade.3 Thyroid dysfunction in women is 10 times more common than men and the relationship of weight gain with thyroid dysfunction has long been closely associated. Understanding the relationship between thyroid disease and weight gain is necessary for clinical practice.

It is estimated that in 2019, 135 million individuals in India were living with obesity.4 Furthermore, thyroid disorders especially hypothyroidism is commonly associated with weight gain and with an estimated 42 million citizens with thyroid disorders in our country, it is not uncommon to find an overweight individual with an elevated TSH.5 A population-based study in India found that the prevalence of subclinical hypothyroidism was 3 times more than overt hypothyroidism and twice as common in women than in men.6 With the increasing prevalence of obesity in our community, it becomes important that we re-visit our understanding in their relationship. A study from the Indian subcontinent revealed that about 33% of individuals with obesity had overt hypothyroidism and about one-tenth had subclinical hypothyroidism.5 In another metanalysis involving 22 studies it was found that the relative risk of having thyroid dysfunction among obese individuals was 1.83 ( 95% CI 1.63–2.11, p< 0.001). In the same analysis it was shown that the relative risk of obesity in individuals with positive thyroid peroxidase antibody (TPOAb) was (95% CI 1.31–2.85, p= 0.001).7

The thyroid hormone secreted by the thyroid gland is a tyrosine-based hormone that is primarily responsible for the regulation of metabolism. Broadly the effects of thyroid hormone on the body result in increased use of O2 consumption which as a result affects growth, development in mammals, regulates lipid metabolism and absorption of carbohydrates.8 The main effectors of the thyroid axis are the T4 and T3 components which bind to nuclear thyroid receptors which result in the expression of different genes that synthesize proteins and thereby regulate cell function. Due to the metabolic effects of T4 and T3 which result in calorigenesis, nitrogen excretion from the body is increased, in such a situation if oral intake of food does not increase proportionately then endogenous protein and fat stores are catabolized which result in weight loss.8

The mechanism of weight gain in hypothyroidism is complex. It is associated with decreased thermogenesis as well as decreased basal metabolic rate.9 Coupled with this imbalance caused to fatty acid and protein catabolism there is an overall increase change in body composition. Another important cause of weight gain is fluid retention which contributes to a large effect of weight gain which improves with treatment in over hypothyroidism.

With the understanding of these mechanisms, there has been a large volume of research into the relation of thyroid function and weight gain. In euthyroid individuals, thyroid function test within the normal reference range has been associated with an increased risk of weight gain. In obese individuals, analysis of thyroid function has found a relatively higher proportion of FT3 compared to FT4. This has been assumed as a defense mechanism by the body to increase energy expenditure in a supposed state of decreased responsiveness of peripheral tissue to circulating thyroid hormones. One theory suggests an increased higher deiodinase activity that results in relatively higher FT3.9,10The adipose tissue has receptors for insulin, glucocorticoid, and sex steroids hormones and under whose influence, via the activity of lipase there is a breakdown of stored fats into fatty acids which is then circulated in the bloodstream during the fasting state. Two hormones central to appetite and regulating energy balance that are produced by adipocytes include leptin and adiponectin. Leptin, however, is affected by the hypothalamic feedback loop which affects the hypothalamic deiodinase-II (D2) which is a major regulator of body weight.10 Leptin acts through inhibition of food intake and stimulates locomotor activity and energy expenditure which acts specifically in the hypothalamus particularly at the arcuate nucleus (ARC). The ARC nucleus plays a major role in regulating energy homeostasis and appetite. It contains neurons that contain both orexigenic and anorexic peptide-containing neurons. Leptins act on these neurons by inhibiting and stimulating the release of these peptides respectively causing a total effect of a decrease in appetite. The action of  leptin in regulating thyroid hormones is summarized in Figure 1.11 The action of brown adipose tissue is also directly influenced by the thyroid status of a given individual. The activity of type-II deiodinases which is modulated by thyroid function, particularly T3 signaling provides brown adipose tissue with its maximum thermogenic effect.  Their action is directly influenced by the thyroid status of the individual and has been recognized as an important target for treating obesity.12 The overall mechanisms of alterations in thyroid hormones in an obese individual are summarized in Figure 211 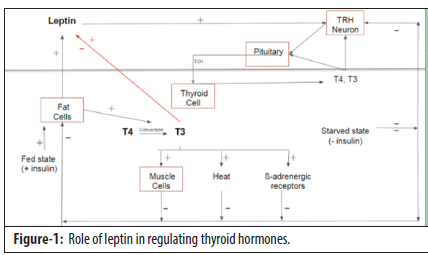 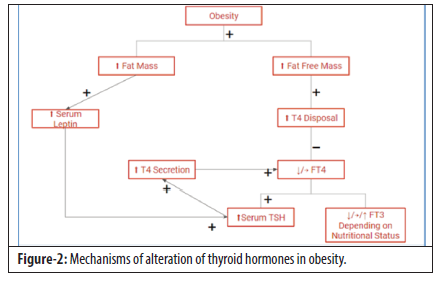 Clinical impact of the altered thyroid physiology in obese individuals

Due to the altered thyroid physiology in obese individuals described before, the TSH levels are at the upper limit of normal or slightly increased across age groups in individuals with increased body mass index and waist circumference.10 A moderately elevated T3 or free T3 levels are reported in obese subjects along with lower T4 levels. In another study, a progressive fat accumulation correlated with an increase in TSH, and fT3 irrespective of other metabolic associations.13 These thyroid alterations are found to revert after weight loss which may either be induced by bariatric surgery or low calorie diet.9,10Both free T4 and TSH have been significantly reduced after bariatric surgery in as many as 90% of subjects. Even earlier stages of a life-style intervention without noticeable changes in body mass index have shown to reduce TSH and FT3. This is probably secondary to the alterations in the body composition and subsequent reduction in production of inflammatory cytokines and their adverse impact on the thyroid function. In another study even the thyroid structure also showed improvement after weight loss.

The key clinical challenge of finding an elevated TSH level in an obese individual is to differentiate subclinical hypothyroidism from elevated TSH secondary to obesity. Furthermore, an elevated lipid profile in these individuals may be secondary to either subclinical hypothyroidism or obesity. This may further add a treatment dilemma in the clinical decision making.

Another important clinical implication of detecting elevated TSH in patients for evaluation of obesity is not to attribute the entire weight gain to the thyroid dysfunction. It is important to note that a significant number of patients who are overtly hypothyroid, may still be very thin.  At present there is paucity of data regarding the extent of actual weight gain in hypothyroidism and the amount of weight loss after restoration to euthyroidism with L-T4 treatment. Moreover, the available data show that contrary to a common belief, treatment of overt hypothyroidism results in only modest weight loss and that too not in all patients.

Further research has recommended normative values based on the body mass index cutoff of patients with obesity. Based on a study by Valdes et al including 3928 individuals it was found that the reference range for TSH was estimated as 0.6 to 4.8 µUI/mL in the underweight category (BMI<20 kg/m2 ) where as upto 7.5 µUI/mL in the morbid obesity category (BMI≥40) was proposed to be normal. The TSH in this study was based on E170, Roche Diagnostics, Basel, Switzerland.14

Though obesity and hypothyroidism may both impact fertility outcomes in patients attending an infertility clinic, it is not associated in patients with polycystic ovarian syndrome.  The clinical proposed cut-off’s for TSH based on BMI are summarized in table.

To summarize both hypothyroidism and obesity are common public health problems in women. They not only coexist but also alter the physiological process involved with each condition. Assessment of thyroid hormones in obese individuals needs to be interpreted in light of their body mass index. Future research and awareness is needed to establish the therapeutic thresholds of thyroid hormones and the impact of treatment in obese individuals.

# Indian data suggests that about a third of individuals with obesity have overt hypothyroidism and about one-tenth have subclinical hypothyroidism.

# Moreover, the relative risk of having obesity is higher in those who have TPO positivity

# A moderately elevated TSH, elevated T3 and a lower T4 is classically described thyroid dysfunction in patients with obesity