Methods: This cross-sectional study was performed at the outpatient department of Sindh Institute of Urology and Transplantation (SIUT) from May to July 2021.

Results: Out of 104 patients with steroid-resistant nephrotic syndrome, siblings of 66 patients were enrolled. Mean age of primary patients with steroid resistant nephrotic syndrome was 8.7±4.3 years. Most common histopathological diagnosis was focal segmental glomerulosclerosis in 25 (37.9%) children followed by minimal change disease in 17(25.8%) of them. The majority, 48 (72.7%) patients were on immunosuppressive treatment, while 4 (6.1%) had progressed to chronic kidney disease (CKD). A total of 178 siblings were recruited in the study. There were 99(55.6%) boys and 79(44.4%) girls. Their mean age was 10.67±6.2 years. Consanguinity was high in our study population i.e. 56(84%) families. Positive proteinuria on dipstick was detected in only 5(7.5%) enrolled SRNS families. One family refused further testing. Two of the five affected siblings had nephrotic range proteinuria. Renal biopsy of one of them showed membranous nephropathy while the second showed mesangiocapillary glomerulonephritis. Both had normal renal functions.

Childhood nephrotic syndrome is classified mainly into steroid-sensitive or steroid-resistant nephrotic syndrome (SRNS) based on the response to the initial steroid regimen. Of the two, SRNS is more challenging to treat because of a heterogeneous etiologic profile and a greater propensity to progress to end-stage kidney disease (ESKD).1,2

The aetiology and pathogenesis of SRNS have remained a conundrum for decades.3 An upsurge in genetic testing with the easy and cost-effective availability of this diagnostic modality has led to the identification of more than 50 dominant or recessive genes which if mutated, can cause SRNS.4 The implicated genes code for proteins that are integral for podocyte function which itself is an important component of the glomerular filtration barrier. While these monogenic causes make up only 30% of the cases of SRNS as elucidated by large cohort studies5 but, they have provided valuable insight into the pathogenesis of SRNS. Importantly, the causative genes or pathogenic mechanisms in the remaining cases remain to be elucidated.6

Monogenic forms of SRNS may be familial or sporadic. Studies have shown that monogenic SRNS and more so, the recessive variant, has a higher prevalence in consanguineous families.6,7 However, on the contrary, when Abid A et al in their study screened SRNS patients of Pakistani origin with high consanguinity rates, they found a very low prevalence of the most common genes known to cause SRNS.8 This finding has created a void in the knowledge of the genetics of SRNS in our population. Perhaps, the disease-causing genetic variants are different in our population. Besides, the cost constraints and limited availability of genetic testing restricts their routine use in most developing countries.

Keeping the familial forms in view, both, the International Paediatric Nephrology Association (IPNA) SRNS guidelines 20209 and the recent Indian guidelines10 recommend screening of asymptomatic siblings of children with SRNS for proteinuria by urinary dipstick. This would identify siblings at risk of similar disease as well as point to a genetic cause of SRNS which can be further confirmed by specific genetic testing.

In this study, we aimed to screen all asymptomatic siblings of our SRNS patients for proteinuria with the inexpensive urinary dipstick test to detect and treat affected siblings in order to prevent long-term complications. To the best of our knowledge, this is the first study investigating the urinary abnormalities of such a large cohort of siblings of SRNS children.

This cross-sectional study was performed at the outpatient department (OPD) of Sindh Institute of Urology and Transplantation (SIUT), Karachi, over three months (May to July 2021), after approval from the ethical and scientific committee (SIUT-ERC-2021/A-256).

We used Epi Info11 sample size calculator for the estimation of sample size after taking the approximate SRNS sibling population of 1000. With the confidence interval of 95% and margin of error 5%, and the reported prevalence of asymptomatic dipstick proteinuria ≥+1 of 15.2%12 in school-going normal children, the sample size of 166 was calculated for number of siblings to be screened. Consecutive, non-probability sampling technique was used.

We enrolled all the primary SRNS patients (104) of which only 66 patients complied and brought their siblings (178 asymptomatic siblings) for urinary screening to the outpatient department. Families of infantile nephrotic syndrome (INS), steroid-sensitive nephrotic syndrome (SSNS), whether frequently relapsing (FR) or steroid-dependent (SD), as well as secondary SRNS, were excluded from the study. Standard definitions according to KDIGO 2012 guidelines were used to define SRNS, SSNS, FRNS, SDNS, and secondary SRNS.13

Written and informed consent was obtained from the parents/guardians of the primary SRNS patients before enrollment of their siblings in the study. Demographic, histopathological details, and treatment of primary SRNS patients along with demographic data of siblings were recorded. First-morning urine samples of the enrolled siblings were obtained. The DIRUI H10 reagent strips were used. After immersing the reagent strip completely in urine for 30 seconds urinary proteinuria was quantified as per the colour intensity change from yellow to blue on the urine strip as follows: trace (10-30 mg/dl), +1 (30-100 mg/dl), +2 (100-300 mg/dl), +3( 300-1000 mg/dl), and +4(>1000 mg/dl).  Results of ≥+1 were considered positive.12

Siblings with positive dipstick test were further subjected to urine protein quantification by first-morning urine protein to creatinine ratio (PCR) as well as 24-hour urinary protein quantification. Blood samples for serum creatinine and serum albumin were also taken.  A Urinary PCR of ≥2 mg/mg and a 24-hour urinary protein of more than 1000 mg/m2/day was considered as nephrotic range proteinuria. All siblings with nephrotic range proteinuria were subjected to renal biopsy using an automated biopsy gun under real-time ultrasound guidance.

Statistical analysis was performed using SPSS version 20. Categorical variables were expressed as frequencies and percentages while continuous variables were represented by mean with standard deviation.

We enrolled 104 SRNS patients, of which 66 patients and their families agreed to participate. Of the primary patients, 38(57.6%) were boys and 28(42.4%) were girls (Table 1). Age at study enrollment ranged from 2-19 years with the mean age being 8.7±4.3 years. The common histo-pathological diagnosis among the enrolled SRNS patients was focal segmental glomerulosclerosis (FSGS) in 25 (37.9%) children followed by minimal change disease in 17(25.8%) of them. One SRNS patient was on treatment without renal biopsy due to a solitary functioning kidney with ureteropelvic junction obstruction (UPJO). The majority (n=48, 72.7%) were on immunosuppressive treatment, while 4 (6.1%) had progressed to chronic kidney disease (CKD). 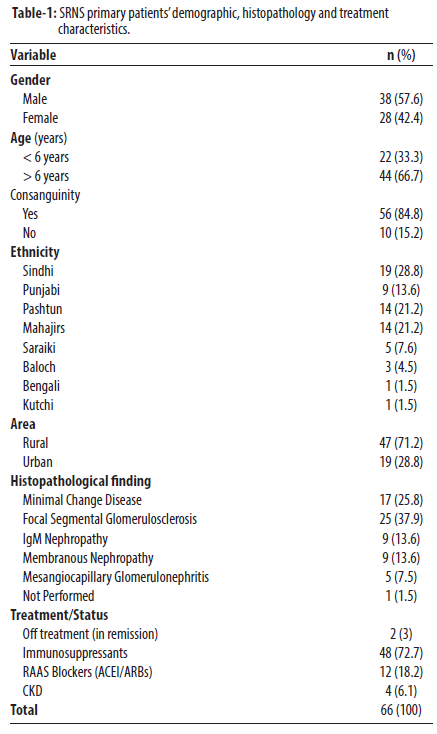 About one-third of all children were of Sindhi ethnicity. Consanguinity was high in our study population i.e. 56(84%) families. Two-thirds of the families belonged to rural areas while one-third of them belonged to urban areas. Table 2 presents the demographic characteristics of the affected siblings. 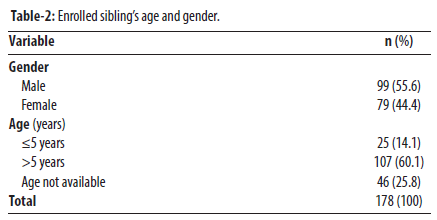 Positive proteinuria on dipstick was detected in 5 (7.5%) enrolled SRNS families. One family refused further testing.  Four out of five siblings with positive dipstick tests were further assessed. Renal biopsy was performed on two participants after confirmation of nephrotic range proteinuria. Details of the five affected siblings are outlined in Table 3. One sibling had membranous nephropathy on biopsy while the second had mesangiocapillary pattern on renal biopsy. Their biopsy findings were similar to that of their SRNS sibling. No extra-renal manifestations or syndromes were seen in either the primary patient or their enrolled sibling.

This study screened a large number of asymptomatic siblings of children with SRNS for the presence of proteinuria on the urinary dipstick. It aimed to determine the frequency of proteinuria in affected siblings and to establish a likely familial and hence genetic cause of SRNS in those families.  However, despite a very high rate of consanguinity and a large family size with an average of 3 siblings per family, an unexpectedly low frequency of proteinuria was detected in the siblings tested.

We screened 66 ethnically diverse SRNS families and found positive urinary dipstick proteinuria on a single occasion in siblings of only 5 (7.5%) families in the background of a high percentage of consanguinity in 54 (84%) families. No extra-renal findings or syndromes were noted in either patient or sibling tested. This observation is in strong and striking contrast to conclusions drawn from studies done on genetics in SRNS. With a highly consanguineous population, the characteristics of an autosomal recessive disease expression with a younger age at onset of NS, fully penetrant disease, and associations with other malformations are expected.14 Sadowski et al analyzed genes from multiple international centres. They reported a rate of detection of SRNS causative mutations in 45% of the families tested from the centre of Saudi Arabia with the highest rate of consanguineous families at 71.4%.6 A similar observation was reflected in the study by Varner et al15 who studied outbred populations and concluded that family history was the only significant clinical predictor of genetic SRNS.  The marked disparity in our population can likely be explained by environmental influences, gene polymorphisms, and undiscovered gene variants.16

The results of our study are well corroborated by the conclusions drawn from the work of Abid A et al, who conducted a study on the genetics of SRNS in the paediatric population catered at our institute and found a low prevalence of the commonly implicated genes as follows: NPHS1 (5.5%), NPHS2 (3.4%), WT1 (0%), and LAMB2 (7%).9 This was contrary to that reported by the large-scale studies of Trautmann A et al and Sadowski et al. Their studies identified monogenic causes of SRNS in 20-30% cases of the examined cohorts.6,7 The remaining 70-80% cases have unknown causative genes so far.

Ethnic and geographical diversity in the aetiology of SRNS has been reported.17 Trautmann A et al and Sadowski et al studied multi-ethnic international cohorts and found NPHS 2 to be the commonest causative gene with reported frequencies of 13% and 10% respectively.6 In comparison, Wang F et al demonstrated that ADCK4 (6.7%) was the commonest causative gene in Chinese children.18 While WT1 was found to be the commonest affected gene among the South Koreans.17 The reason for this difference in genetic mutations worldwide is unclear, but possibly could be due to different inclusion criteria, genetic testing methods, the number of genes analyzed, and ethnic diversities.9

FSGS was the most common histopathological finding in our study (40%). This finding was similar to the results demonstrated by other studies on SRNS patients.18 Surprisingly, in our study, none of the familial cases of SRNS had FSGS as the underlying pathology. Instead, the biopsy finding was membranous nephropathy (MN) and mesangiocapillary glomerulonephritis (MCGN) respectively in the two patients who had an affected sibling. In furtherance, their affected sibling had the same underlying pathology on renal biopsy as the primary patient. Sadowski et al in their study found that MCGN was associated with DGKE1 mutation in 40% of the SRNS cases, while only 2% had NPHS2 mutation.6 In continuum, familial membranous nephropathy has so far been rarely reported in the literature.19,20 Many multi-centric studies focusing on the genetics of SRNS have not featured membranous nephropathy as predominant underlying histopathology either.21 This strongly suggests that perhaps, not only is a different spectrum of genes mutated in our children who present with SRNS but probably, altogether different pathogenesis like polygenic inheritance underlies SRNS in our paediatric population.3

Our study was the first to assess proteinuria in siblings of SRNS children after formulation of international recommendations for screening of siblings. The limitation of our study included the screening of proteinuria in siblings by urinary dipstick on only a single occasion to assess for familial involvement of probable monogenic SRNS. A positive finding on dipstick was not confirmed with a genetic analysis for an SRNS causative gene. Infantile nephrotic syndrome, which makes up a greater percentage of monogenic causes of SRNS was excluded.

This study concluded that despite the common practice of consanguineous marriage in our society, the frequency of familial and hence monogenic NS as screened by urinary dipstick for proteinuria in asymptomatic siblings of SRNS patients remains low. Hence, either the sporadic form of NS or the involvement of a different set of genes with variable penetration occurs in our population.

The Relationship between Preoperative Smoking Cessation, Anxiety, and Postoperative Anxiety and Pain: A Prospective Clinical Trial at a University Hospital in the East of Turkey on 120 Participants

Stuttering related and psychosocial predictors of impact of stuttering