Obesity is one of the major public health problems of this century. The prevalence of obesity has increased globally in the last few years, making it an emerging pandemic. The global disease estimates in 2014 showed that Pakistan ranks at number eight among the 10 countries which comprise half of the total 693 million obese people in the world.1

There are multiple indicators of obesity, such as body composition indices. These parameters are estimators of overall health risks in healthy individuals. The internal human body comprises four major components which include water, protein, fat, and inorganic salts or minerals. In order to maintain optimal health and physical fitness standards, the proportion and balance of these constituents should be adequate.2

The evaluation of body composition is commonly done using the bicompartmental model, which splits the body into fat mass and fat-free mass (comprising soft lean mass, i.e. total body water, proteins, and bone mineral content). One of the low cost, non-invasive and yet a reliable means for body composition evaluation is bioimpedance analysis (BIA). It measures the electrical properties of various tissues, utilising a low voltage electric current that flows through the body. It is one of the most widely used modes of body composition assessment in clinical settings and epidemiological studies.3

The evaluation of body composition parameters is thus quite essential as it provides valuable information regarding nutritional and health status as well as diagnosis of various diseases. Several cultural, geographical, age, gender, developmental, and nutritional variations exist when comparing body composition measurements and other factors related to health or diseased states.4 To the best of our knowledge, no such study has been conducted in Pakistan which comprehensively assessed or reported the average body composition status of adult population. Hence, the main objectives of this study were to conduct an obesity analysis of healthy adult Pakistani population and to evaluate the body composition parameters in both genders.

An analytical cross-sectional study was conducted on 205 healthy adults from October 2020 to March 2021. Sample size was calculated by Raosoft, keeping 5% margin of error and 95% confidence interval for adult population of Rawalpindi and Islamabad.5 Participants were recruited using non-probability purposive sampling. The inclusion criteria comprised healthy adults aged 18-45 years, both males and females, who had not been participating in any structured exercise or dietary regime for the last six months prior to the study. Whereas, individuals with a history of any neuromuscular, cardiac, renal, lung or liver disease, with implantable electrical devices such as pacemakers, pregnant females or those experiencing any hormonal imbalances or diagnosed gynaecological/obstetrical conditions were excluded.

This study was carried out at the Fauji Foundation Hospital, Rawalpindi, and Foundation University, Islamabad. The study protocol was approved by the ethical review committee of the Foundation University, Islamabad. Written, informed consent was obtained from all the participants. A demographic sheet was used to collect all relevant information followed by body composition assessment using bioelectrical impedance analyser (Inbody 770). The participant stood on the foot plates of the analyser and two probes were held in both hands, keeping the arms in abducted position, away from the body for 2-3 minutes. It utilises wide range multi frequencies and tetrapolar 8-point electrodes to accurately analyse a range of body composition indices. Waist-to-hip ratio (WHR) was calculated using waist and hip circumference measures. A WHR value of >0.85 for females and >0.9 for males was taken as abnormal. The data gathered during this study was accessible only to the primary investigating team, thus ensuring confidentiality and anonymity for all participants.

Data was entered and analysed on SPSS v 22.0. Kolmogorov-Smirnov normality test was applied on outcome variables and data was found to be non-normally distributed for all variables (p<0.05) except body mass index (BMI). Test of choice was non-parametric Mann Whitney U-test for gender based differences in body composition parameters. One-sample T-test was applied to compare the mean obesity indices of the current sample with international reference standards. 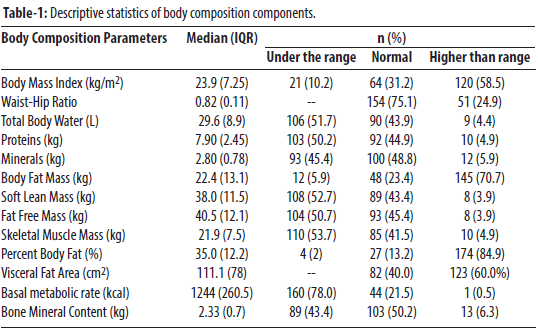 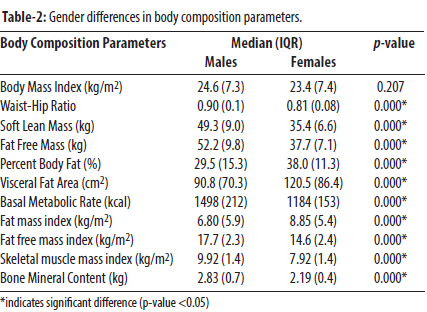 For the comparative obesity analysis of subjects in our sample, the obesity parameters of Asian Pakistani population were compared with normative of other ethnicities. The mean percentage body fat [34.61±9.68] of our sample was significantly higher than the mean of White [23.67±6.55], Hispanics [27.30±6.73], and Europeans [29.30±7.30], (p=0.00). Gender based comparison of PBF and FMI of our sample with Brazilian and Chinese adults showed no statistically significant difference between the mean fat indices of males but a significantly higher PBF & FMI in Pakistani females (Table 3).

The aim of this study was to conduct a body composition profiling of healthy Pakistani adults. The results showed that majority of the sample population was overweight which is in accordance with studies conducted on Americans, Europeans, and Indians as prevalence of overweight and obesity has been noted to be higher in all ethnicities during the last four to five years. This strengthens the importance of monitoring obesity prevalence on priority basis.6,7

The comparative obesity analysis of the current study sample of Pakistani adults depicted similar results as our population, particularly females, were noted to have a higher percentage of body fat and fat mass index as compared to other ethnicities. These differences in our study could be due to the considerable genetics, environmental heterogeneity, and lifestyle habits in Asian population. A study by Catherine et al on body fat among a multi-ethnic sample of collegiate reported that while similar associations were observed between BMI and PBF of various ethnicities, the BMI of Asian-American females did not represent the actual underlying adiposity. Presence of relatively higher PBF with normal weight and BMI may be responsible for increased risk of obesity-related diseases in the future.10

The results of this study have shown the current obesity status of Pakistani adult population. Young adults and middle-aged adult population are the most productive members of a community and the society’s survival and progress depends upon optimal and effective functioning by its members. As identification is the first step towards modification of unhealthy life patterns, it is essential to work towards primary prevention of such health problems to reduce the risk of developing chronic diseases such as diabetes and Cardiovascular Diseases in the future.

In the current study, the effect of physical activity and dietary influence was not taken into account. It is recommended that body composition profiling should be conducted at a wider scale keeping in mind these factors as well, and further interventions should be aimed at preventing and reducing the burden of obesity and obesity-related cardio-metabolic diseases.

Disclaimer: This manuscript is a part of PhD thesis project.

Conflict of interest: None to declare.

Funding disclosure: None to declare.

Effects of decompression on pain, range of motion and function in patients with acute vs chronic lumbar radiculopathy