Sudden Sensorineural Hearing Loss (SSNHL) is described as a hearing loss of at least 30db in three frequencies in pure tone audiogram over 3 days or less. The cause may be infectious, vascular, systemic immune-mediated or idiopathic. Multiple viral infections have been associated with SSNL. However, dengue fever, which is an RNA viral disease that is directly transmitted by a mosquito of genus Aedes, has been reported to present with SSNHL only thrice in existing literature to the best of our knowledge. There are multiple different proposed mechanisms of SSNHL in viral infections and multiple viruses have been proven to cause hearing loss. However, dengue virus is not one of them. In majority of cases of SSNHL, the exact cause is very difficult to determine. We report the case of a gentleman who had unilateral SSNHL after dengue fever.

Hearing loss is a frequent clinical presentation involving almost 1/5th of the population. It is usually spontaneous and can be very frightening for the patient.1It can be sensorineural, conductive or mixed type, and the onset can be sudden or gradual.1,2 Sensorineural hearing loss is more frequent in the elderly and those exposed to noise.2 The severity of this disease can be divided into mild, moderate, severe and profound sensorineural hearing loss.2 De Kleyn in 1944 described Sudden Sensorineural Hearing Loss (SSNHL) as “A hearing loss of atleast 30db in three frequencies in pure tone audiogram over 3 days or less”.1,2 The cause may be infectious, vascular, systemic immune-mediated or idiopathic2however, a thorough clinical assessment is always necessary to rule out any life-threatening or reversible causes such as benign or malignant lesions, autoimmune disorders or post traumatic nerve injuries.2 Dengue is an important arthropod-borne acute viral infection, with the greatest disease burden in tropical and subtropical regions, affecting approximately 50 million individuals per year worldwide.3 The incidence of dengue fever in the last 13 years has grown almost 30 folds.3 Dengue fever is an RNA viral disease transmitted by a mosquito of genus Aedes, the principal vector of which is Aedes Egypti.4 Transmission occurs following a bite by an infected vector. After an incubation period of 3-7 days, viral replication occurs which causes viraemia.3,4 Four serotypes of dengue virus, designated as DENV1-4, have been isolated till now.3,5 Dengue fever can present with a myriad of symptomatology ranging from asymptomatic state to complications and sometimes even fatalities.3,4 Patients can experience headaches, myalgia, arthralgia, retro-orbital pain, anorexia, rash, melena, haematuria, epistaxis and decreased pulse rate.4,6 The mortality rate ranges from 1% to 20% in poorly managed cases.3,7 Symptoms of sore throat, pain in ear, nasal congestion and bleeding, runny nose, dry mouth, tinnitus, dizziness and gingival bleeding have also been reported in existing literature.5 Multiple viruses such as Varicella Zoster Virus, Epstein-Barr Virus, Rubella, Mumps, Enterovirus, and Coxsackie virus have been reported to cause SSNHL in patients post-infection.6 The first case of sensorineural hearing loss was reported by Bruna et al in 2015.8 Kapil Soni published a case series comprising of three patients who had dengue fever associated with SNHL in 20219 and another case report was also published reporting SNHL in a patient with meningitis and dengue fever in 2021.10 Till date, we have come across only these reported cases.

We report the case of a gentleman who had unilateral SSNHL after dengue fever.

A 46-year-old gentleman with no known co-morbids presented to the Aga Khan University Hospital Karachi ER on 25th November 2019 with complaints of high-grade fever, petechial rash on limbs and trunk, abdominal pain, and non-projectile vomiting for the last 3 days. On arrival his heart rate was between 60-80 beats per minute, and he had low blood pressure. After stabilising the patient’s vitals, the investigations showed, positive dengue antigen with platelet count of 12x109 per litre. The patient was admitted in the special care unit and was treated for dengue. He was transfused 12 pints of platelets in two days. On the third day of admission the patient started complaining of tinnitus and decreased hearing on the left side. An otolaryngology consult was generated for evaluation. Rinne test was positive bilaterally and Webber test was lateralized to the left suggesting left sided sensorineural hearing loss. The patient subsequently underwent Pure Tone Audiometry (PTA) and Speech Audiometry (SA) at the Audiology suite. The PTA showed a sensorineural hearing loss of 90dB, and the SA showed no repeatable words. (Figure1) An MRI Brain was also done to rule out any other intracranial causes of unilateral hearing loss however it was found to be normal. The patient was started on oral prednisolone at 40 mg per day in a tapering dose for 3 months. At 3 months PTA and SA were repeated. PTA showed an improvement at some frequencies from 90dB previously to 60dB and SA showed 20% speech discrimination score. (Figure 2) The patients’ tinnitus resolved after steroid therapy. The gentleman on follow-up was explained the rarity of his disease and a written consent was taken to publish his case as case report. 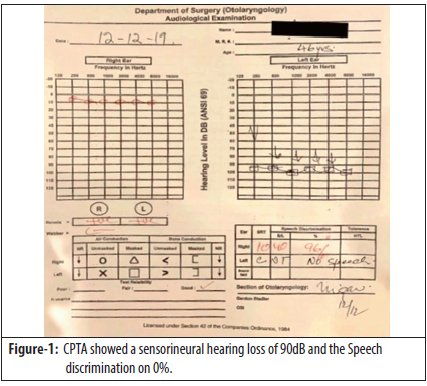 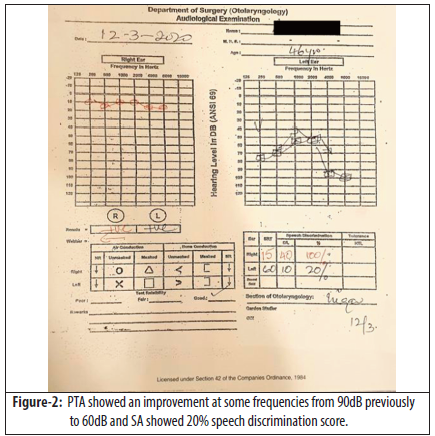 In this case, a diagnosis of dengue associated with sudden sensorineural hearing loss was made with very little improvement over time. Dengue is an arthropod borne acute viral infection3,5 while SSNHL is a hearing loss without any history of otological disease. In our case there was no history of noise exposure, use of ototoxic drugs, autoimmune disease, surgical intervention, or any medical cause that would explain SSNHL. Multiple viruses are known to have an association with SSNHL but Dengue causing SNHL has been reported in case reports only.2,5 Therefore, we recommend that if patients with dengue complain of aural symptoms it should be investigated promptly.

One proposed mechanism of SSNHL after viral infection is invasion of the cochlear cavity or nearby soft tissues by the virus via blood or CSF causing inflammation (chochlitis/ neuronitis).2,5 Invasion of the cochlea by virus was proved when Westmore et. al. isolated mumps virus from the perilymph of a young female suffering from SSNHL after an episode of parotitis.2 The other proposed mechanism is activation of a dormant virus in the inner ear.2 There is also a third proposed mechanism which suggests that viral infection anywhere in the body can set off an antibody response that can in turn affect the cochlea,2,8 a hypothesis also known as the immune mediated hypothesis.8

Patients with dengue fever usually present with very vague symptoms, and rarely a positive examination finding. Some patients may have hyperaemia of the oropharynx, nose and nasopharynx,1 while a few patients may also have retro-orbital pain or frontal headaches with nasal discharge. In ear related symptoms, vertigo may be present however, SSNHL has not been reported in existing literature.2

It is also pertinent to note that the blood supply of the cochlea and labyrinth is via an end artery and according to an experimental study, disruption in blood supply to the cochlea for even one hour may result in irreversible hearing loss.2

In majority of cases of SSNHL, the exact cause is very difficult to isolate. In existing literature, multiple viruses have been proven to cause hearing loss however, dengue virus is not one of them. A total of only three case reports have been published on the topic including one published earlier in 2014 by Bruna et. al. reporting bilateral SSNHL in a patient after haemorrhagic dengue,8 however, our patient had unilateral SSNHL.

SSNHL is a unique and rare presentation of dengue fever and clinicians need to look for SSNHL in such cases. We advise further studies to correlate relationship of dengue virus as a causative agent for SSNHL.

Disclaimer: We have reviewed the scan report. Thirty-three percent overlap is shown with a student paper Aga Khan University. This is because an initial draft of our manuscript was submitted for review as a student paper in Aga Khan University. Certain revisions were advised at that time, which were made. Therefore, the current manuscript is completely original, and the overlap is only due to an earlier version of the paper present in the Turnitin database, that was submitted as student paper in AKU and analysed via Turnitin.

Funding disclosure: No funding to disclose.

Management of an extensive frontal pyocoele using an external approach: A case report