Extensor lag in patients after total knee arthroplasty with and without pre-operative rehabilitation regime: A short report

Total knee arthroplasty is gaining popularity in individuals with advanced stages of knee osteoarthritis among the affording economic class. The aim of the study was to assess the effects of preoperative rehabilitation in the management of post-operative quadriceps lag. The study design was non-randomised clinical study conducted from January 2017 to March 2017 at Ghurki Trust Teaching Hospital, Lahore, Pakistan. Non probability convenient sampling technique was applied to collect data of 30 patients with TKA. The data was collected by self-designed questionnaire, and goniometric range of knee extension was used as the main outcome. Independent sample t-test was applied to assess the difference between the groups. The mean age of the patients was 64.37±11.66 years. The mean score for Extensor Lag with pre-operative rehabilitation regime was 12.53º±36.57º and without this regime it was 23.20º±79.18º (p value 0.005 & t-value -3.035). The study shows a correlation between increased post-operative extensor lag and pre-operative rehabilitation regime.

The terms 'extensor lag' or 'muscle lag' or 'quadriceps lag' are the clinical indications the patients present with as affecting their functional ability.1   Disruption of the mechanism of extension after total knee replacement is a thought-provoking obstacle for the orthopaedist. The management protocol includes observation, primary repair, direct primary repair using synthetic ligament, and reconstruction. Patients who experience disruption in the extensor mechanism show poor functional abilities and require long post-operative rehabilitation.2   It is necessary to work on the strength of the quadriceps muscles post-operatively to increase the efficiency of the TKA.3   Adding continuous passive motion (CPM) machine in interventional therapy after TKA was not supported later as no such benefits were noted. As it was not seen to reduce the impairment level after surgery, its use was not supported.4

The co-relation between surgical failure and extensor lag which was seen in a previous study 10 years ago has now been replaced by loosening of prosthesis, infection, and instability among the reported common causes of TKA failure.5   At least 2° to 10.5° degree of quadriceps insufficiency was seen in majority of healthy young adults in active extension in sitting position.1 Persistent functional problems decrease the positive outcome level and reduce the patient's satisfaction level as well.6

TKA is used to fulfil the functional demand and reduce pain, but the weakness of the quadriceps muscles after surgery made it difficult to achieve the goal. The change in the prosthetic design is required to increase the efficiency of the TKA.7

Functions associated with quadriceps like climbing stairs, impaired gait and balance are all impaired due to muscle weakness.8   Post-operative conservative treatments are reversed just because of increased impairment.9   Extensor lag reduces the efficiency of the prosthesis, and reduces the normal ROM of the quadriceps and increases the loosening of the prosthesis.10   Activity limitations after TKR is mostly due to weakness and reduced activation of Quadriceps muscles.11   Quadriceps strengthening exercises with biofeedback improve the quadriceps lag in subjects with knee OA.12   In a recent comparative study, it was reported that patients with Q-lag experienced higher pain scores than those with no Q-lag and there was no difference in their readmission rates.13

Although TKR has been practiced in knee osteoarthritis patients, no evidence about their preoperative protocols and their subsequent outcomes have been reported from Pakistan. We aimed to study the differences in outcomes with different preoperative exercise protocols in terms of post-op quadriceps Lag.

This study was conducted with the objective of establishing evidence about the prominence of pre-operative rehabilitation regime to minimise the post-operative extensor Lag in patients with TKA.

It was a non-randomised clinical study conducted from January to March 2017 after approval by the Institutional Review Board (IRB) on December 17, 2016. The location of the study was Ghurki Trust Teaching Hospital, Lahore. Non Probability Convenient sampling technique was applied for data collection and the sample size was estimated using the G-power software.8,14  A total of 30 patients with TKA of both genders fulfilling the suitability criteria and with positive consent were included. Patients with traumatic injuries of the knee and those who did not give consent to participate were excluded. Written informed consent was signed by all patients.

Out of 30, 15 patients who followed at least a two-week pre-op exercise plan (including glutei strengthening, hip flexors stretching, quads strengthening, hamstrings stretching, calf stretching, and dorsiflexors strengthening exercises-2 sets of 10 repetitions with progression) were labelled as group A, while 15 patients who did not perform any pre-op exercise programme were labelled as group B. The data was collected by a well-formulated and validated questionnaire which was pre-tested on five patients each for both groups. The questionnaire was filled by a qualified physiotherapist using patient interviews, assessment of patient records and by means of a universal goniometer15   to measure the range of motion (ROM) in the knee. Range of motion was recorded from the leg's lateral side of the patient with a long arm goniometer in supine lying position. The physiotherapist took position by the test side of the patient. The extensor lag was determined by the difference between the angle of passive knee extension and the angle at which the patient has control but only after the patient was asked to extend the knee actively and then the passive extension was done by the therapist (Figure). 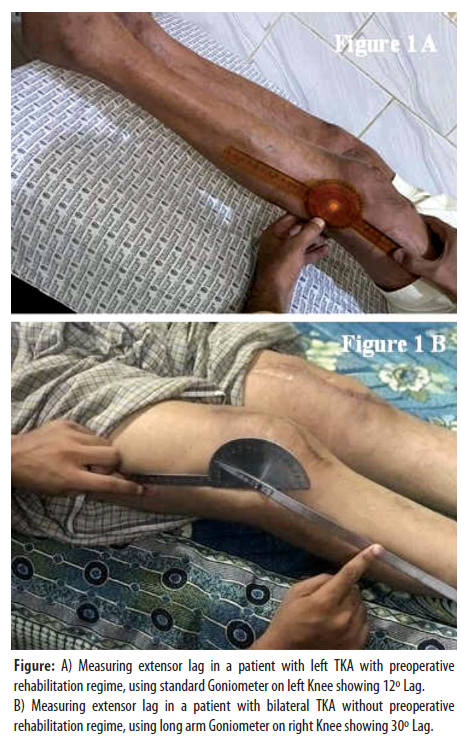 Data was analysed using SPSS version 22. Normality of the data was tested by Shapiro Wilk's test and was noted to be normally distributed; while Independent sample t-test was applied to determine the difference between the groups.

This study shows a direct correlation between post-operative extensor lag and pre-operative rehabilitation regime in patients with TKA.