Objective: To audit the radiology department of a health facility, focusing on contrast extravasations management pre- and post-implementation of a standard protocol.

Methods: The audit was conducted at the Radiology Department of Shifa International Hospital, Islamabad, Pakistan and comprised reported computed tomography contrast extravasation incidents from January 2017 to December 2019 in the retrospective phase before the implementation of a standard protocol. Post-implementation, re-audit was done prospectively to assess compliance from January 2020 to May 2021. Overall score of >80% was chosen arbitrarily as a qualifying standard for adequate documentation.

Conclusion: Lack of early identification and appropriate management, especially in cases of large-volume extravasation, may result in significant morbidity.

Contrast extravasation is a not an uncommon complication resulting from contrast-enhanced conmputed tomography (CT) imaging, especially on using an automated power injector to deliver the contrast.1 Paediatric and geriatric groups with debilitating conditions are at a greater risk.2 Female gender has been reported to have greater predilection as well, especially those with morbid obesity. Fortunately, a large number of contrast extravasations result in mild swelling over the cannula site with induration.1   However, it can lead to a potentially limb-threatening event, and ensuring adequate patient assessment and management following this adverse clinical event is essential to prevent lethal limb damage.2,3

Timely identification of moderate to severe extravasation and appropriate referral within 4 hours can reduce the risk of debilitating complications.3,4

There was an increased number of reported CT contrast extravasations notice at the site of the current study in 2019 which prompted a search for causative factors and the need for departmental audit in order to meet the international standards. Though incident reporting and documentation had significantly improved after Joint Commission International accreditation (JCIA), inefficient staff response and confusion was identified regarding how to deal with contrast extravasation.

The current study was planned to audit the radiology department, focussing on contrast extravasations management pre- and post-implementation of a standard protocol.

The audit was conducted at the Radiology Department of Shifa International Hospital, Islamabad, Pakistan, and comprised reported CT contrast extravasation incidents from January 2017 to December 2019 in the retrospective phase before the implementation of a standard protocol. Post-implementation, re-audit was done prospectively to assess compliance from January 2020 to May 2021. After approval from the institutional ethics review committee, the audit covered the entire period since the first reported case of contrast extravasation in the department.

The target was to meet certain standards and to evaluate documentation which have been agreed upon at the study site in the light of American College of Radiology (ACR) contrast media guidelines5   and the Patient Care Report (RCR) audit template.6   Overall score of >80% was chosen arbitrarily as a qualifying standard for an adequate documentation.

The following strategic protocols were introduced:

Informed consent of patient and briefing regarding risk of contrast extravasation and potential complications with management, prior to postcontrast CT examination in the history room.

The IV cannulas older than 72 hours were replaced. Standardised 18G or 20G IV cannulas were placed at antecubital fossa, especially for angiographic CT studies. The CT contrast media was placed on a heater, especially during the winter season, to maintain contrast temperature at 37 degrees Centigrade.

The maximum pound-force per square inch (PSI) of automated injector was set at 325.

CT technologist closely monitored the patient starting from visual examination of the cannula site, giving test dose of 10ml normal saline and flushing it out, and examining the skin for any induration or swelling from auto-injection of the contrast media followed by beginning of CT scan till 5-15min of the completion of examination. 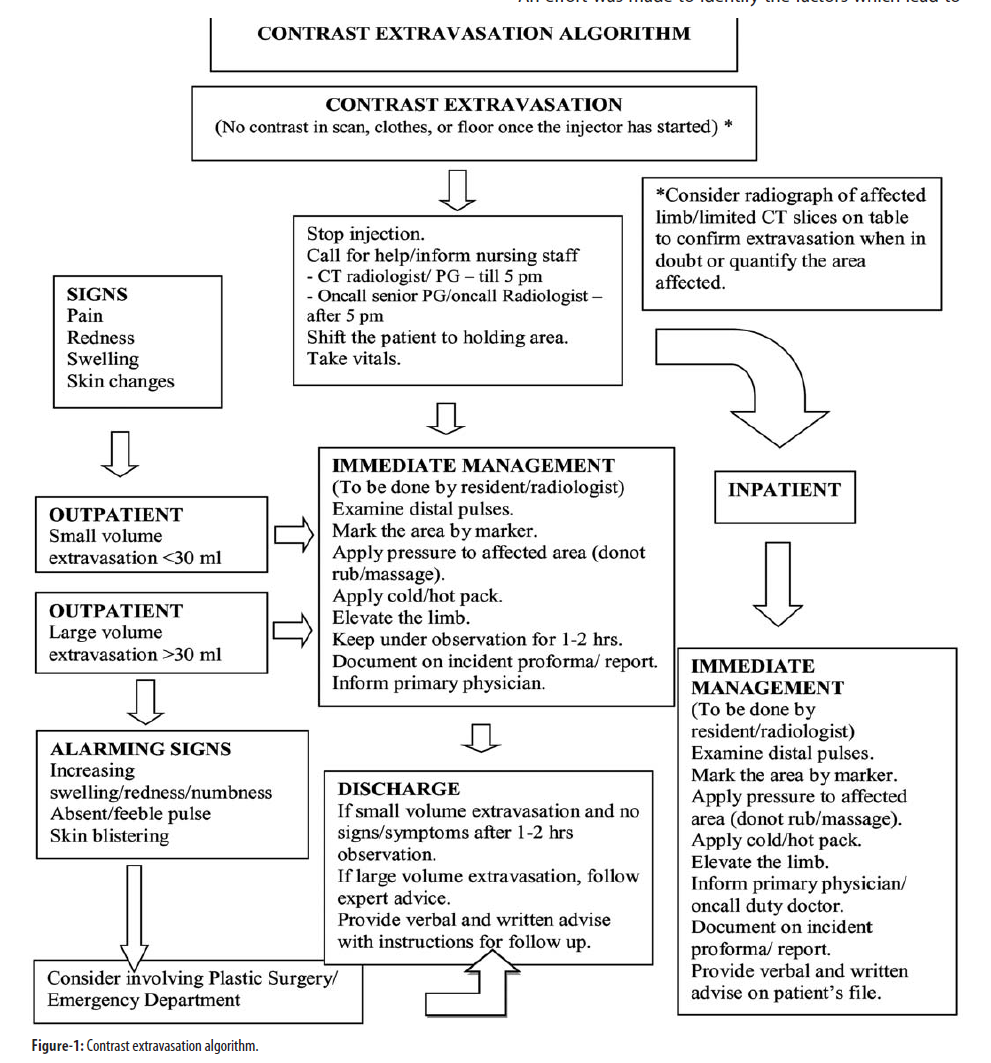 Use of contrast extravasation kit was placed in the patient holding area, as advised by the radiologist with the help of the nursing staff, which contained hydrocortisone cream/injection, dexamethasone ampoule, 25ml sodium chloride (NaCl) IV, alcohol wipes, sterile gauge, marker, gloves, and hot/cold packs.

A vein finder was installed (Accu vein AV500) to ease IV cannulation process and to limit the risk of extravasation, especially in elderly patients with thin fragile veins. Separate meetings were conducted along with power-point presentations and practical demonstrations for residents/radiologists, radiographers/technicians dealing with CT and magnetic resonance imaging (MRI) scans, and nursing aides detailing contrast extravasation, its management and how to follow the emergency response protocol. Detailed flowsheets were pasted on notice boards in the CT console room, holding area and history room for the ease of staff.

In the second prospective phase post-implementation of the target standards, re-audit was done to assess compliance through analysis of documentation and medical records from patient files.

Data analysis was done using descriptive statistics for qualitative and quantitative variables with the help of Microsoft Excel 365 software.

Of the 49 contrast extravasation cases, 17(34.7%) had dynamic CT, 18(36.7%) had CT angiographic studies and 14(28.6%) had single post-contrast venous studies. All 49(100%) patients were held under observation in the department's holding area under the supervision of a dedicated nursing aide. In the first phase, 18(69.2%) patients received ice pack and limb elevation as the first line of management, but in the second phase, all 23(100%) received it. In the first phase, data mentioned 3(11.5%) plastic surgery consultations, but the volume of contrast media extravasation and the details of the consultations were not mentioned. In the re-audit, data mentioned 3(13%) plastic surgery consultations with adequate details showing large volume extravasations >30ml of contrast. In 1(2%) case, the patient had to undergo suction and saline flush-out to counter extravasation of 80ml volume. On follow-up no complications were seen in the said patient. In the first phase, 2(20%) of the 10 parameters cleared the 80% cut-off mark; 'study performed' 25(96%) and 'limb assessment by technician' 26(100%). In contrast, in the second phase, only 2(20%) parameters failed to clear the cut-off mark; site of cannula/extravasation' 18(78.3%) and 'volume of contrast' 15(65%) (Table). 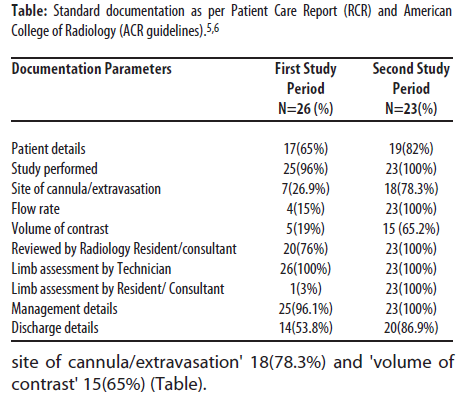 The audit found a lot of discrepancies in documentation and patient management in the incident record in the first study period, which warrants a strong suspicion of underreporting hugely based on the stigmata among CT technicians that in the event of extravasation, they are to blame. There was lack of awareness regarding proper documentation among the radiology residents as well. These issues were addressed and found to be rectified in the re-audit, but there was still lag in documentation regarding volume of contrast media injected and site of cannulation/extravasation by technicians and residents both.

Common complications resulting from extravasation of contrast media include localised pain, skin induration, oedema, necrosis or, rarely, compartment syndrome.10,11  Majority of mild to moderate cases can be treated conservatively by icing the affected area and elevating the limb.12   There is, however, no data supporting the efficacy of icing over warm compress, and both may serve the same purpose of alleviating the limb swelling by the former due to pain relief and increasing the blood circulation by the latter with improved absorption of extravasation.13   Only patients with large-volume contrast extravasation may benefit from a plastic surgery intervention. The indications for specialist intervention are increasing pain, numbness, change in skin colour surrounding the site of extravasation in the involved limb, or compartment syndrome.4,5,14  Only few patients required plastic surgery consultation in the current patient cohort, with the majority having been managed conservatively, and only one patient was treated with saline flush-out.15   This is consistent with literature review.2,6,9,16

There were a lot of discrepancies and missing data in the first-phase audit regarding contrast extravasations, but in the second phase 100% compliance with most of the set standards was noted. There was still <80% compliance reported in documenting the exact contrast volume, seen in earlier months of 2020, which is probably attributed partly to the fact that emergency response to contrast extravasation was new to some of the technical stuff and residents which took them time to properly adopt it and learn the details of documentation since it is an infrequent occurrence. The second parameter with lag in compliance percentage was documentation of the site of extravasation, a pure human error, as it was documented accurately in 18 (78.2%) cases.

The limitations of the current study are that the findings are entirely dependent on the documentation, as there was no other way to confirm or refute these. Also, the study is unable to accurately state whether all these preventative measures had actually reduced the rate of contrast extravasations or not. Additionally, there are no records currently available to show in which patients the vein finder was used for IV cannulation. This requires an annual intra-department audit with the help of a proforma-based survey that has been designed for the department (Figure-2) to ensure that performance benchmarks are met with consistency for quality assurance as well as to reduce the causative factors. 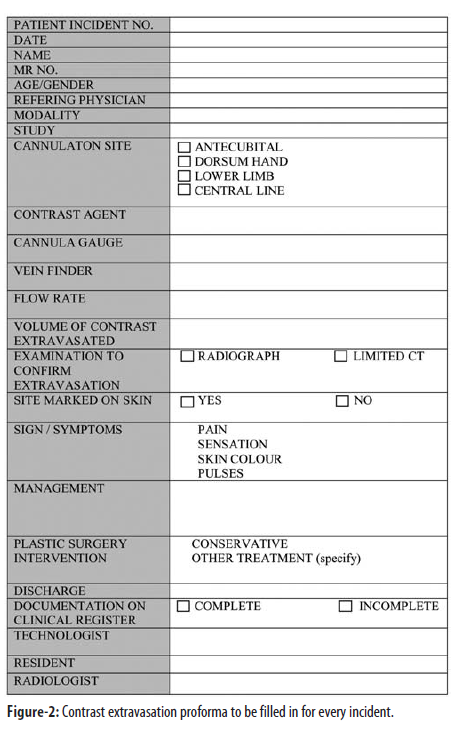 Based on the current findings, a specialist review must be obtained for any patient showing signs of limb compromise, especially in large-volume >30ml extravasation. The rest of the cases can be managed conservatively and sent home with clear instructions regarding when to consult emergency services.

Curtailing the risk of contrast media-related reactions, including extravasation, following post-contrast injection in a patient undergoing CT scan is a key element of clinical risk management and assessment in radiology departments. Lack of early identification and appropriate management, especially in cases of large-volume extravasation, may result in significant morbidity and permanent damage to the patient. Hence, setting up predefined departmental policy and guidelines are imperative to safeguard patient care and reputation of the department.