Objective: To compare the intensity of insertion-site pain between epidural catheterisation with 16-gauge needle and with 18-gauge needle at various time points, and the number of attempts taken to locate the epidural space while using either of the needles.

Method: This single-blind prospective study was conducted from August 2019 to January 2020 at the Shaukat Khanum Memorial Cancer Hospital and Research Centre, Lahore, Pakistan, and comprised of adult patients of either gender with American Society of Anaesthesiologist grade I-III requiring thoracic epidural for elective abdominal procedures. The patients were divided into two groups using simple randomised sampling with group A receiving 16-gauge and group B receiving 18-gauge epidural. The intensity of insertion-site pain was noted at the time of insertion, at 24 hours and one week after the insertion. The number of attempts taken to locate the epidural space was also noted for the two groups. Data was analysed using SPSS 23.

Conclusion: The difference in pain scores or number of attempts for 16-guage or 18-guage groups were not significant.

Epidural nerve block is a technique that was first described in 1885,1   now widely used as an adjuvant to general anaesthesia (GA) for intraoperative as well as postoperative pain relief in patients undergoing thoracic or abdominal surgeries.2   It refers to the insertion of a catheter in the epidural space located using an epidural needle and subsequent administration of local anaesthetics with or without adjuvants for sensory or motor block at the level of nerve roots. Its advantages include superior postoperative pain relief,3-7  decreased risk of pulmonary complications,8   faster return of gastrointestinal function,9   increased patient satisfaction and reduced opioid requirement.3   Several studies have proven epidural analgesia to be the gold standard for pain relief in patients undergoing different surgeries, including cancer surgeries and management of labour in the parturient.

Moreover, the procedure carries a risk of a number of serious complications during or after insertion,10   such as damage to the spinal cord or nerve roots leading to temporary or permanent disability,11-14  infections like meningitis and abscesses,12,13  post-dural puncture headache,14,15  or sometimes prolonged labour if employed for analgesia in a parturient.16   One of the commonly occurring minor yet distressing complications is that of pain at the injection site17,18  and backache.19   In a study of 273 patients done in Greece,8 patients complained of back pain ranging in duration from 5±2 to 8±2 days postoperatively.20   The occurrence of these complications may be lessened with increasing competency of the physician performing the procedure, as well as with accurate patient positioning and appropriate selection of epidural needle size.

Different types and sizes of needles are used for the identification of the epidural space and placement of catheter at the required levels. The most commonly used needle is the Tuohy needle and it is available in different sizes ranging from 16-gauge (G) to 22-gauge.

In a study done on 105 patients receiving lumbar epidurals for non-obstetric surgeries, 28(26.7%) experienced back pain. Of these, 16 patients had received a 16G epidural while 12 had received an 18G epidural.21   Another study did not report any differences in pain, complication rate or ease of use when 16G and 18G needles were compared for lumbar epidural insertion in obstetric patients.22   However, there is limited data available in literature about the choice of needle size and any reported complications associated with thoracic epidural catheterisations for abdominal surgeries.

The current study was planned to compare the intensity of insertion-site pain between epidural catheterisation with 16G and 18G needles at various time points, and the number of attempts taken to locate the epidural space while using either of the needles.

This single-blind prospective study was conducted from August 2019 to January 2020 at the Shaukat Khanum Memorial Cancer Hospital and Research Centre, Lahore, Pakistan. After approval from the institutional ethics review board, the sample size was calculated with confidence level 99% and 5% margin of error keeping in view the population proportion reported earlier.21   The sample was raised using simple random sampling technique from adult patients of either gender scheduled for thoracic epidural for elective abdominal procedures who were aged 18-70 years and were classified as American Society of Anaesthesiologist (ASA) grades I-III. Patients with any contraindications to epidural blockade, like coagulopathy, uncorrected hypovolaemia, increased intracranial pressure, or local skin infection, those undergoing emergency surgeries, those with body mass index (BMI) >35kg/m2 and those with history of back problems, marked spinal deformity, previous spinal surgery or impalpable anatomical landmarks were excluded.

After taking informed consent from the patients, they were randomised into two groups using an online randomiser http://www.randomizer.org)23   which generates randomised numbers using a complex algorithm seeded by the computer's clock. It allows randomisation by letting the users choose the number of groups, numbers per group, and also allows each number in a group to remain unique so that it appears only once in a group. This process ensures elimination of any bias in the recruitment process.

A list of random numbers 1-135, divided into two groups (A and B) was generated. Patients were numbered and grouped according to the sequence in which they appeared for surgery starting with the first person being enrolled as No. 1, the second one No. 2 and so on. Patients in group A received 16G epidural, while those in group B received 18G epidural. The patients were kept blinded to group allocations and epidural needle size.

Intraoperatively, intravenous (IV) access was established. Standard monitoring instruments non-invasive blood pressure (NIBP), pulse oximeter and electrocardiogram (ECG), were attached. The patients then received the epidural catheter based on their respective group. The epidurals (Portex®) were sited by experienced anaesthetists who had successfully inserted more than 50 epidurals and were well-versed with using the needle size allocated.

The use of anxiolytics (midazolam) was left at the discretion of the anaesthetist doing the procedure. If given, it was recorded on the proforma. After aseptic measures, all patients received 5ml lidocaine 2% via a 25G needle for each epidural space being used. Further boluses of 2ml of lidocaine 2% were administered if they still felt any pain. Total volume of lidocaine administered was documented.

The pain scores and study information were recorded by a second anaesthetist present in the operating room (OR). The parameters measured were pain experienced by patient at the needle insertion site as assessed by the Numeric Pain Rating Scale (NPRS), with 0 = no pain and 10 = the worst possible pain imaginable by the patient. The pain rating was taken at the time of insertion, at 24 hours and one-week post-procedure. Heart rate reading and any other complications were observed and recorded before and during the procedure. The number of attempts required to successfully localise and catheterise the epidural space was also noted. A new attempt was considered when the needle was taken out of the skin and re-inserted. Patients were followed up postoperatively by an anaesthetist from the acute pain team who was different from the patient's primary intraoperative anaesthetist. The pain scores were recorded on the same proforma at 24 hours and handed back over to the primary investigator of the study. Patients were contacted on phone regarding their pain scores at 1 week if they had been discharged or in person if they were still in hospital. Data collection was done on a pre-designed proforma.

The data was analysed using SPSS 23. Categorical variables were presented as frequencies and percentages, while continuous variables were reported as mean and standard deviation (SD). For comparing qualitative variables, Fisher's exact test was used. Kolmogorov-Smirnov test was applied to determine the normality of quantitative variables. Mann Whitney U test was used to analyse non-normally distributed variables, and Independent t-test for parametric data. P< 0.05 was considered statistically significant. 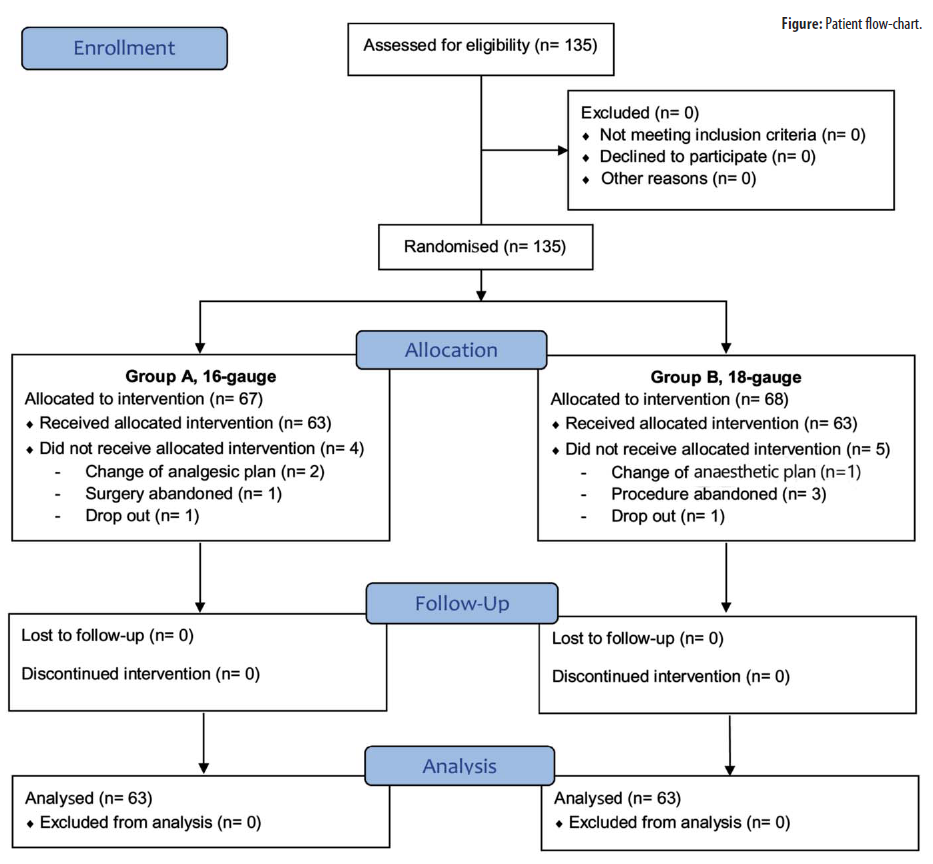 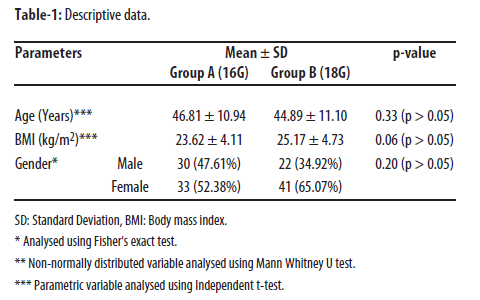 In group A 18(28.6%) patients and in group B 10(15.9%) received midazolam prior to the procedure, but compared to those who were not administered midazolam, the difference was statistically non-significant (p=0.13). 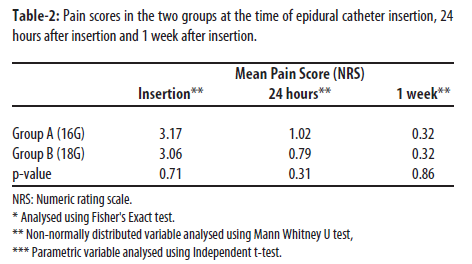 The type and incidence of complications related to the procedure were not significantly different between the groups (Table-3). 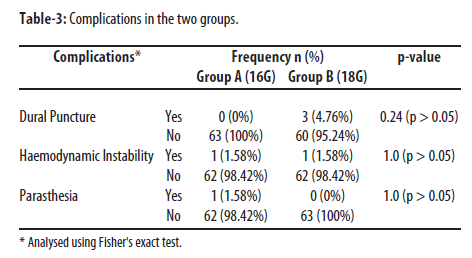 Although the benefits of using small gauge spinal needles are well established, there is paucity of data on epidural needle size preference. Anecdotal accounts suggest patients have less pain when small gauge needles are used, on the other hand a larger needle can potentially give better feel of ligaments and decrease the time in locating epidural space. However, this information remains subjective. Pain scores and complications such as dural punctures and hemodynamics instability are measures whose reflection would remain non-discriminatory to the best of our knowledge, the current study is the first prospective effort to have addressed the matter of needle gauge in a non-obstetric population.

In absence of enough data, the decision to select the needle mostly depends on the anaesthetist's training, choice and prejudices. The anaesthetists inserting  the epidurals in the current study were experienced and well-versed with the needle size they were using. This is one of the strengths of the study as Grau et al. reported an approximate 60-90 epidural placements required to attain a technical plateau.24

Additionally, the current study used objective data, including the NPRS, vitals and development of complications, to minimise the chance of bias. The amount of local anaesthetic solution infiltrated for every space was also standardised to eliminate confounding.

The maximum numeric rating pain score recorded was 8 and 6 in the 16G and 18G groups respectively. Although this was seemingly higher in 16G group, it did not reach statistical significance. At 24 hours, the maximum NPRS score had decreased to 4 and 3, respectively, while at one week, only 22 patients experienced pain with a maximum NRS of 3 experienced by only 4 patients.

The number of attempts is another factor which is thought to be influenced by the needle size. The current study found no significant difference between both the groups in this regard.

McNeill et al. studied the same in obstetric population and found similar results.23   Furthermore, according to them, the incidence of dural puncture was higher in the 18G group, but the results did not reach the level of statistical significance.23   The current study had 3 dural punctures, all in the 18G group, but these proved to be non-significant as well. The incidence of other complications in the earlier study23   was also comparable with the current study.

The study has a few limitations. The anaesthetists who were inserting the epidural were aware of the needle size which could have led to operator bias. Secondly, 28 patients were given midazolam for anxiolysis prior to performing the procedure which may have led to a difference in pain recall. However, on subsequent analysis, it was found that this number was non-significant compared to those who did not receive any midazolam. In addition, the pain scores did not differ significantly (p=0.28) between the patients who received midazolam (mean pain score: 3.39) and those who did not (mean pain score: 3.04). As a matter of principle, it is advocated that all patients should be offered anxiolysis before starting any invasive procedure.

While epidural catheterisation undoubtedly remains the most superior form of pain relief for abdominal surgeries, its placement also carries the potential to commonly cause back pain or minor complications to the patient. Even though this may be worrisome while inserting the epidural, there is evidence, including the current study, that these concerns are non-significant in the long term in most patients, and, hence, epidural analgesia should be offered to all such patients.

The needle size did not have a significant impact in terms of insertion-site pain during procedure or the number of attempts required to locate the epidural space in patients undergoing abdominal procedures.