Objectives: To investigate the role of serum malondialdehyde as a diagnostic biomarker of free radical production and cardiovascular disease in patients treated with maintenance haemodialysis.

Method: The case-control study was conducted in the Department of Biochemistry, Basic Medical Sciences Institute (BMSI) of the Jinnah Postgraduate Medical Centre (JPMC), Karachi, and the JPMC Nephrology ward from January 12, 2018, to January 15, 2019, and comprised patients receiving haemodialysis as the cases and healthy controls. Blood samples were obtained from all the subjects for checking the level of serum malondialdehyde. Doppler ultrasonography was employed to detect the intima media thickness ratio of the common carotid artery of all the subjects. Data ws analysed using SPSS 23.

Results: Of the 90 subjects, 45(50%) each were cases and controls. There were significant differences in mean values related to age, body mass index and blood pressure between the groups. A statistically significant rise was seen in serum malondialdehyde and carotid artery intima media thickness ratio in the cases compared to the controls (p<0.05).

Conclusion: Serum malondialdehyde was found to be significantly raised in haemodialysis patients compared to the healthy controls.

Haemodialysis is a medical procedure used in end-stage renal disease (ESRD) patients to remove fluid and waste products from the blood and to correct the ongoing electrolyte imbalances.1   Chronic kidney failure is an important public health concern all over the world.2   In ESRD patients, the risk of developing cardiovascular complications is very high.3

Cardiovascular complications are a major causative factor of morbidity and mortality in ESRD patients receiving maintenance haemodialysis.4   Several factors, both traditional and non-traditional, have been considered to be responsible for the development of these complications. These factors include smoking, hypertension, diabetes, hyperlipidaemia, and factors that develop from the uraemic condition and the haemodialysis procedure itself.5   The correlation between the uraemic factors and development of cardiovascular complications is still unclear, but oxidative stress (OS) has emerged as a major causative factor for the progression of vascular disease and endothelial dysfunction.6

Due to these complications, the annual mortality rates of patients receiving maintenance haemodialysis are much higher than the general population.7   As estimated by the European Registry of patients on renal replacement therapy, the chances of cardiovascular complications among patients on renal replacement therapy is 35-50 times higher compared to the general population.8

OS occurs due to disturbance in the equilibrium between the pro-oxidants and anti-oxidants. This imbalance results in the formation of reactive oxygen species (ROS) and free radicals which cause damage to body cells.9

ROS are oxygen-containing molecules formed as a by-product in the cells of aerobic organisms. They can start autocatalytic reactions as a result of which the molecules to which they react are also converted into free radicals to continue the chain of damage.10   ROS can be generated during metabolism of myeloperoxidase (MPO), nitric oxide synthase, nicotinamide adenine dinucleotide phosphate (NADPH) oxidase, lipoxygenase pathway and enhanced ROS production as by-product electron transport chain reactions.11

Evidence suggests association of OS with the development of atherosclerosis. There is also association of OS with ESRD complications, like dialysis-related amyloidosis, malnutrition and anaemia.12   The half-life of free radicals is very short, so the clinical evaluation of OS is done by estimating stable oxidised compounds or their derivates, like advanced glycation end products, oxidised lipid and protein derivates and oxidised nucleic acid derivatives, or by the estimation of antibodies formed against these oxidised products, such as anti-oxidised low-density lipoprotein antibodies.13

Malondialdehyde (MDA) is a low molecular weight, 3-carbon-containing aldehyde (CH2[CHO]2). It is produced by the chain of reactions mediated by free radicals. MDA is commonly used as a biomarker of lipid peroxidation.14   ROS cause the degradation of polyunsaturated lipids, causing lipid peroxidation and MDA formation.15   Thus, the levels of MDA production can be used as a biomarker to estimate the level of OS.16

When OS occurs, it triggers oxidation and subsequent damage to biological macromolecules, causing severe tissue damage.17   Oxidative degradation of lipids yields MDA. Protein damage occurs due to thiol oxidation, oxidation of side-chains of amino acids, unfolding, fragmentation and misfolding of deoxyribonucleic acid (DNA), resulting in the loss of activity. Besides, 8-hydroxydeoxyguanosine is used as an index of DNA damage.18

The current study was planned to investigate the role of serum MDA as a diagnostic biomarker of free radical production and cardiovascular disease in patients treated with maintenance haemodialysis.

The case-control study was conducted in the Department of Biochemistry, Basic Medical Sciences Institute (BMSI) of the Jinnah Postgraduate Medical Centre (JPMC), Karachi, and the JPMC Nephrology ward from January 12, 2018, to January 15, 2019. After approval from the institutional ethics review committee, the sample size was calculated using OpenEpi calculator21   in the light of literature.22

The sample was raised using non-probability consecutive sampling technique. Those included were individuals of either gender aged 18-50 years undergoing haemodialysis for at least 2 months and not receiving anti-oxidant supplementation. Besides, healthy controls aged 18-50 years without any known morbidity were randomly selected from the general population. Those excluded were patients suffering from any other chronic illness, like tuberculosis (TB) or malignancy, and patients receiving haemodialysis for acute renal failure.

After taking informed consent from the participants, data was collected using a predesigned proforma. The general information of the subjects was taken along with detailed history about their pervious medical record. Age, gender, duration of haemodialysis and drugs, height, weight, body mass index (BMI), blood pressure (SBP), pulse, temperature and respiratory rate were also noted. MDA was estimated in the form of thiobarbituric acid reacting substances (TBARS) using the method defined by Okhawa et al.23   High-resolution B mode ultrasonography was used for the detection of the thickness of tunica media and tunica intima of the common carotid artery.

Of the 90 subjects, 45(50%) each were cases and controls. There were significant differences in the mean values related to age, BMI and blood pressure between the groups (Table-1). Mean serum MDA among the controls was 10.87±3.04mmol/ml, compared to 31.01±8.48mmol/ml among the cases (p<005) (Table-2). A statistically significant rise was seen in serum MDA and carotid artery IMT ratio in the cases compared to the controls (p<0.05) (Table-3). 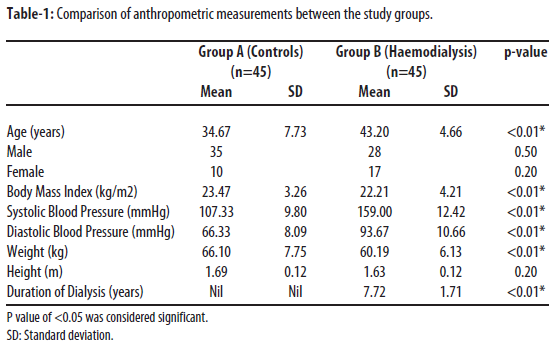 OS is a major complication in patients with chronic diseases. In haemodialysis patients, the dialysis procedure itself leads to a decrease in the antioxidants and an increase in oxidative molecules, thus aggravating the already present OS.22   Uremic state along with dialysis procedure is a major risk factor for OS-related complications in these patients. The present study was designed to evaluate serum MDA concentration as a marker of free radical production during haemodialysis. Significant results were seen during the comparison between the studied groups.

The current study revealed a significant increase in mean systolic and diastolic BP of the cases compared to the controls. The reason for this increase may be HYpervolumae, overactivity of renin angiotensin system, administration of erythropoietin and enhanced stimulation of the sympathetic nervous system, as has been reported earlier.24

Serum MDA was also significantly increased in the patient group. Kundoor et al.25   and Marjani et al.26   also described a significant increase in serum MDA in haemodialysed patients compared to the controls. The possible mechanism which leads to increase in MDA levels is that ROS activate phospholipase A2, causing peroxidation of many mediators by arachidonic acid which are finally metabolised to MDA.

Significant results were obtained on Doppler ultrasonography. There was significant mean difference obtained between the groups for mean IMT, and right and left common carotid artery outcomes.

The results show that IMT ratio increased in patients compared to the controls. As increased IMT is an indicator of the development of atherosclerotic changes, the result signifies that patients receiving dialysis are at a greater risk of developing cardiovascular diseases.

The current findings are in line with lietarture,27   and suggest that patients on haemodialysis are subjected to OS that leads to the formation of oxidised low-density lipoprotein (LDL) and generation of inflammatory mediators that lead to the development of atherosclerotic heart disease.

The current study showed that patients on haemodialysis are subjected to OS because of excessive production of oxidative molecules, poor intake of dietary anti-oxidants and loss of anti-oxidants during the dialysis procedure itself. These factors contribute to the chronic inflammation, development of atherosclerosis and mortality due to cardiovascular disease in these patients. Administration of anti-oxidants therapeutically plays a good role in minimising these harmful changes, but it has not been adopted as a treatment protocol in these patients.

Further prospective studies are required to detect the beneficial role of anti-oxidant administration against cellular stress which will probably decrease the increased morbidity and mortality in these patients. Moreover, OS parameters in these patients need to be monitored to avoid the possible outcomes of OS. Dietary guidelines should also be developed to ensure the intake of adequate vitamins and minerals in these patients.

The limitations of the current study include its single-centre orientation and a sample size. Also, since non-probability sampling technique was used, it was difficult to make inference about the entire population. It was a case-control study on the basis of which the incidence of disease cannot be commented upon.

Serum MDA was significantly raised in haemodialysis patients compared to the controls. Serum MDA, a biomarker of OS, should be routinely monitored in ESRD patients on haemodialysis, and appropriate anti-oxidants should be added to the treatment regimes after assessing serum MDA levels.

14.    Khoubnasabjafari M, Ansarin K, Jouyban A. Reliability of malondialdehyde as a biomarker of oxidative stress in psychological disorders. Bioimpacts. 2015; 5:123-7.

24.    Rysz J, Franczyk B, Ławiński J, Gluba-Brzózka A. Oxidative Stress in ESRD Patients on Dialysis and the Risk of Cardiovascular Diseases. Antioxidants. 2020; 9:1079.