As posterior shoulder dislocations are rare, they are difficult to diagnose. A good clinical examination, anamnesis, and accurate imaging are essential to prevent inaccurate diagnosis, and these cases can easily be overlooked at a rate of 80%. Early reduction and diagnosis of posterior shoulder dislocation are the most important factors in preventing the development of osteonecrosis of the humeral head. Delayed diagnosis and treatment can lead to some unwanted sequelae. Therefore an early diagnosis and treatment are important.1

In the treatment of posterior shoulder dislocations, closed reduction can be performed at an early stage, while methods of osteosynthesis or arthroplasty with open reduction are most frequently used at delayed stage. The purpose of this study was to present a very rare case of dislocation with bilateral posterior shoulder fracture after epileptic seizure at the age of 68 years, who had good clinical and functional results following simultaneous hemiarthroplasty treatment.

A 68-year-old male patient was seen at a cardiology clinic with a preliminary diagnosis of acute myocardial infarction owing to inability of using both arms and swelling with pain in both shoulders. He was examined in December 2012, in Kahramanmaras Sutcu Imam University, Kahramanmaras Faculty of Medicine, in Orthopaedics and Traumatology clinic.

The patient did not have any known history of neurological diseases. Three days prior to the consultation, he suddenly developed contractions in his whole body. The paramedics revealed that that the patient had experienced tonic and clonic contractions thrice, which lasted for approximately 5 minutes in the form of seizures and spontaneously stopped while the patient was being transferred to the emergency room. In the emergency room, there were no signs of urinary incontinence and tongue biting. However, it was recorded by the emergency doctors that he was in a postictal state. Cardiac functions and enzymes tested due to the preliminary diagnosis of myocardial infarction, were normal.

Electrocardiography showed non-ST elevation and T inversion. The diagnosis was supported by echocardiography and angiography. Physical examination, brain computed tomography and magnetic resonance imaging performed by Neurology and Neurosurgery clinics did not show any neurological pathology. Moreover, no pathology was detected in the Electroencephalography taken after the postictal period.

The orthopaedic physical examination revealed swelling and limitation of movement in both shoulders and severe shoulder pain was caused by the movement. Both shoulders were in adduction, internal rotation, and flexion.

There was no ecchymosis, redness, and open wounds in either shoulder area. On A-P radiographs of bilateral shoulders, there were dislocations with posterior fracture in both shoulders, and in computed tomography images, it was observed that there was a Reverse Hill-Sachs lesion and dislocation with posterior fracture at both humeral heads. In both shoulders, Type VI posterior shoulder fracture dislocation with 4 parts was diagnosed according to Neer classification5 (Figures-1 a, b). Bone densitometry was undertaken due to the patient being more than 65 years age, decreased horizontal trabeculations and accompanying fractures on the radiograph.5 The result of the densitometry, showed the T score to be -3.6. This gave a diagnosis of diffuse osteoporosis. 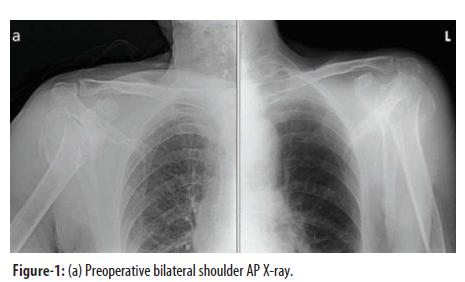 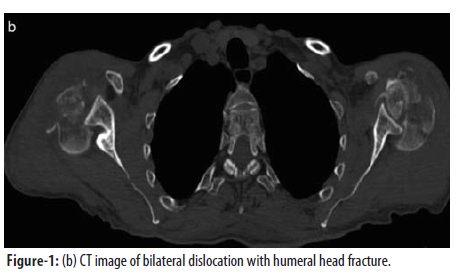 Closed reduction was not attempted due to the patient's advanced age and osteoporosis. Along with Neer Type VI posterior shoulder fracture dislocation into 4 parts. Reverse shoulder arthroplasty surgery was not preferred because there were no previous clinical findings related to rotator cuff tear and degenerative changes in the glenoid and were not observed on radiography and computed tomography. In addition, open reduction and osteosynthesis were not preferred in the surgery because of the high risk of avascular necrosis due to old age, osteoporotic and Neer Type VI posterior shoulder fracture dislocation with 4-parts.

After the epileptic seizure, the patient was diagnosed with bilateral posterior shoulder dislocation and fracture. Bilateral shoulder hemiarthroplasty with simultaneous deltopectoral approach was performed under general anaesthesia (Figure-2). The patient did not experience any intraoperative or postoperative complications. 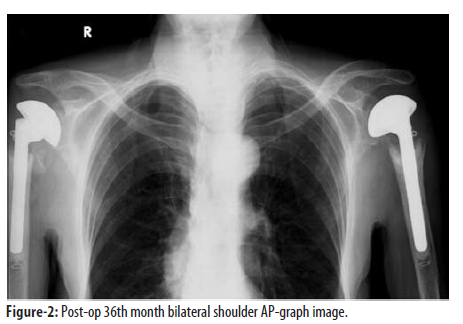 Velpeau bandage was applied on both shoulders after the surgery for one day. Passive shoulder exercises were started within a week, and active shoulder exercises were initiated in 4-5 weeks. The patient did not have any wound site problems during routine examination and after 3 years of follow-up. The later examination showed that he could take both hands toward his head and right and left shoulders were able to perform 100°-90° abduction, 110°-100° flexion, 35°-30° internal rotation, and 30°-25° external rotation.

The mechanism of the shoulder injury during convulsive seizure occurs after severe contraction of the medial rotator muscles, which become unstable owing to lateral rotator forces. Typical position of the shoulder during this seizure is adduction, internal rotation, and flexion. If the seizure stops, humeral head often remains locked behind the glenoid and is often accompanied by a Reverse Hill-Sachs lesion. The fact that the posterior shoulder dislocation is accompanied by a fracture is usually owing to increased stress on the notch in the anatomical neck against the glenoid during long contractions.8,9  Although different types of fractures are identified in relation to the dislocation of the shoulder, the specific classification remains to be fully determined.10

Posterior shoulder dislocation can initially be misdiagnosed in 50%-80% of cases. As patients usually have sufficient movement in the shoulders and the humerus can be moved with minimal palpation, it can be considered normal on A-P graphs of unilateral shoulder. This can lead to inaccurate and late diagnosis by clinicians. Therefore, adequate imaging techniques (X-rays with AP, scapular "Y" lateral and axillary views, and CT scans) in combination with a high index of suspicion and a detailed clinical examination is essential for an accurate diagnosis.11

The determinants of the humeral head ischaemia defined by Hertel are the main factors in the selection of the treatment; medial hinge degradation with metaphyseal head extension and basic fracture pattern are the most reliable factors.12

In cases where the fracture is minimally displaced with no suspicion of avascular necrosis of the humeral head, closed reduction and if necessary, pin fixation should be performed.13   Closed reduction is almost impossible if posterior shoulder dislocations are diagnosed as late as three weeks after the trauma. Open surgical treatment is then required.14

For displaced acute fractures, if gentle closed reduction attempt is unsuccessful in young patients, open reduction and internal fixation option should be preferred. If open reduction is not provided or in cases complicated by the involvement of >50% of the humeral head or the presence of Neer three-or four-part fracture and/or osteoporosis, hemiarthroplasty is a good alternative. Currently, hemiarthroplasty is often used in elderly patients (>65 years) with acute fractures of three or four parts and a high risk of avascular necrosis.4,5,15  In posterior dislocations of the locked shoulder in individuals aged >70 years or posterior shoulder fracture dislocations accompanied by rupture of the rotator cuff and excessive impairment of bone anatomy, reverse shoulder prostheses yield good results.16   In general, treatment should be adapted to the type of lesion, the time interval between trauma and treatment, age, profession, and the desired level of activity of the patient.4

In their study, Gurzi et al. performed osteosynthesis with open reduction on the right side and hemiarthroplasty on the left side for the patient with posterior dislocation having fracture of the bilateral shoulder and achieved good results with 135° flexion, 90° abduction, 45° external rotation, and 50° internal rotation on the side for which they performed left hemiarthroplasty at the end of the second year.17   In our case, simultaneous bilateral hemiarthroplasty was performed, and shoulder function outcomes which were close and similar to those reported in the literature were obtained.

In conclusion, simultaneous shoulder hemiarthroplasty is an effective treatment option to achieve good shoulder functions in patients with rare bilateral posterior shoulder fracture, they are elderly (>65 years), and those with osteoporotic and fragmented fractures. To establish an accurate diagnosis in such rare cases, an accurate and detailed radiological imaging should be performed with a detailed physical examination, and early diagnosis and treatment should be planned.

Funding Disclosure: No financial support was received for this case report.

Informed Consent: Consent was obtained from the patient for publishing his case history for promotion of science.