Prevalence and factors associated with undernutrition among 6-59 months children in Tehsil Battagram, Pakistan

Objective: To find out the prevalence and associated factors of undernutrition in a semi-rural setting.

Method: The community-based cross-sectional study was conducted in Tehsil Battagram of Khyber Pakhtunkhwa province, Pakistan, in January and February 2020 after approval from the ethics review committee of Nanjing Medical University, Jiangsu, China, and comprised children aged 6-59 months who had no physical or mental disability. Data was collected using a structured questionnaire. Anthropometric data was analysed using the World Health Organisation Anthro software. Multivariate logistic regression analysis was used to find out the association between dependent variables, like wasting, underweight and stunting, and independent variables, like socioeconomic, child, maternal and environmental characteristics. Data was analysed using SPSS 21.

Conclusion: Undernutrition among children aged 6-59 months was widespread. Nutrition awareness, interventions and multi-sectoral approaches were found to be needed to cope with the problem in the study area.

According to the World Health Organisation (WHO), malnutrition refers to deficiencies, excesses or imbalances in a person's energy and/or nutrients' intake.1   Malnutrition has two main subtypes. The first type is 'undernutrition', which comprises wasting, which is low weight for height, stunting, which is low height for age, underweight, which is low weight for age, and micronutrient deficiencies, which indicate a lack of important vitamins and minerals. The second type is 'overnutrition', which comprises overweight, obesity and diet-related non-communicable diseases, such as cancer, diabetes, heart disease and stroke.1

There are 52 million wasted, 17 million severely wasted and 155 million stunted children aged <5 years around the world.2   The percentages for wasted, stunted and underweight children aged <5 years are 8%, 26%, and 16%, respectively, in the world.3   Globally, about 5.9 million under-5 children die each year, and undernutrition contributes to 45% of these deaths.4   About half of the global population suffers from maternal and child undernutrition, which leads to intrauterine growth restrictions (IUGRs), low birth weight (LBW) and micronutrient deficiencies.5   India, Bangladesh and Pakistan show the highest prevalence of undernutrition.6   More than half of all stunted, about half of all underweight, and two-third of all wasted children happen to be in Asia.7

Major risk factors of undernutrition include illiteracy, poverty and food insecurity.10   Socioeconomic status, environmental and biological factors are basic causes for inadequate dietary intake, which turns into undernutrition.11   Maternal illiteracy is linked with poor dietary practices, which causes undernutrition in children.12   Mothers who are educated ensure that their kids receive proper medical treatment and balanced nutrition. Many studies have confirmed the relationship between maternal education and high socioeconomic status.13   Another study confirmed that the number of siblings in the home have a positive association with stunting, while it has a negative association with wasting and underweight.14

Multi-sectoral and multi-dimensional strategies are needed to cope with undernutrition in a particular area.15   Bringing improvements in socioeconomic status of people is a step toward eliminating undernutrition among under-5 children.16   Interventions needed for tackling basic and underlying causes of undernutrition are to improve maternal health and nutrition, promote infant and child feeding practices, access to family planning services, supporting mothers in their professions and improving water and sanitation hygiene.17

According to evidence, Pakistan is among the highest undernutrition-prevalent countries.8   Battagram is one of the districts of Khyber Pakhtunkhwa (KP) province in Pakistan. In recent years, no study on undernutrition has been conducted in Battagram. The current study was planned to find out the prevalence of undernutrition and its associated factors in Tehsil Battagram.

The quantitative, analytical, community-based, cross-sectional study was conducted in Tehsil Battagram of KP, Pakistan, in January and February 2020 after approval from the ethics review committee of Nanjing Medical University, Jiangsu, China. According to the 2017 Population census, the population of Tehsil Battagram stood at 296,198, and about 20% of the population is composed of chidren aged <5 years. There are 12 Union Councils (UCs) in Tehsil Battagram, namely Kuza Banda, Banian, Gijbori, Peshora, Thakot, Trand, Batamori, Ajmera, Paimal Sharif, Shumlai, Battagram and Rajdhari. It is surrounded by District Mansehra to the east, District Shangla to the west, District Torghar to the south and District Kohistan to the north.18

The sample size was calculated using the OpenEpi online calculator19 while taking the frequency of undernutrition to be 40% in the KP province.8

The sample was raised using multistage sampling technique. In the first stage, the area was divided into UCs, and from among the 12 UCs, 6(50%) were randomly picked using the lottery method. In the second stage, one village was randomly picked through the same lottery method from the selected UCs. In the third stage, 84 households were picked from every 6 villages using systematic random sampling technique. Each village comprised roughly 600 households. The first household was randomly picked, and then every 6th household was selected. A single sample was taken through the lottery method if the selected household had >1 Child aged 6-59 months. If the children were not present at the time of data collection, another visit was carried out. If a household did not have any chid aged 6-59 months, the adjacent house was considered for selection (Figure). 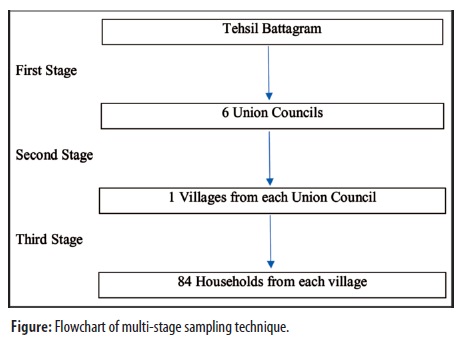 All children aged 6-59 months in the targeted households were included. Those outside the age bracket and those having any acute infection, and those with mental or physical disability were excluded.

Data was collected using a structured questionnaire with closed-ended questions. The questionnaire was translated from English to Urdu and then from Urdu to Pashto, before being back-translated from Pashto to Urdu and from Urdu to English. All necessary changes were incorporated. Face-to-face interviews were conducted with mothers. Anthropometric data from children was collected by using a weighing scale, measuring tape and mid-upper arm circumference (MUAC) measuring tape.

WHA, WAZ and HAZ scores were calculated using the WHO Anthro tool.22

Data was analysed using SPSS21  . Descriptive statistics were used for calculating frequencies and percentages of wasting, underweight and stunting. Multivariate logistic regression model was used to find out the association between dependent and independent variables. P<0.05 was taken as significant. 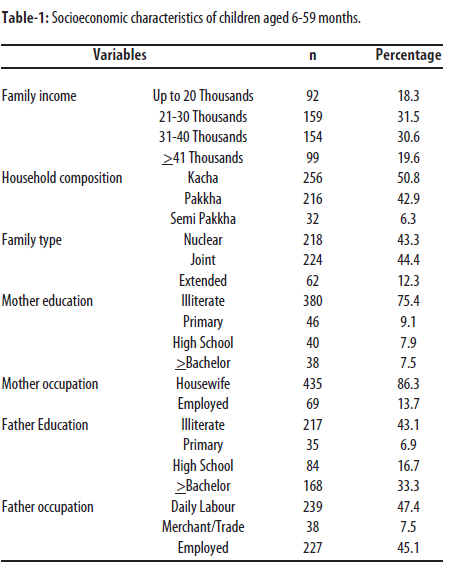 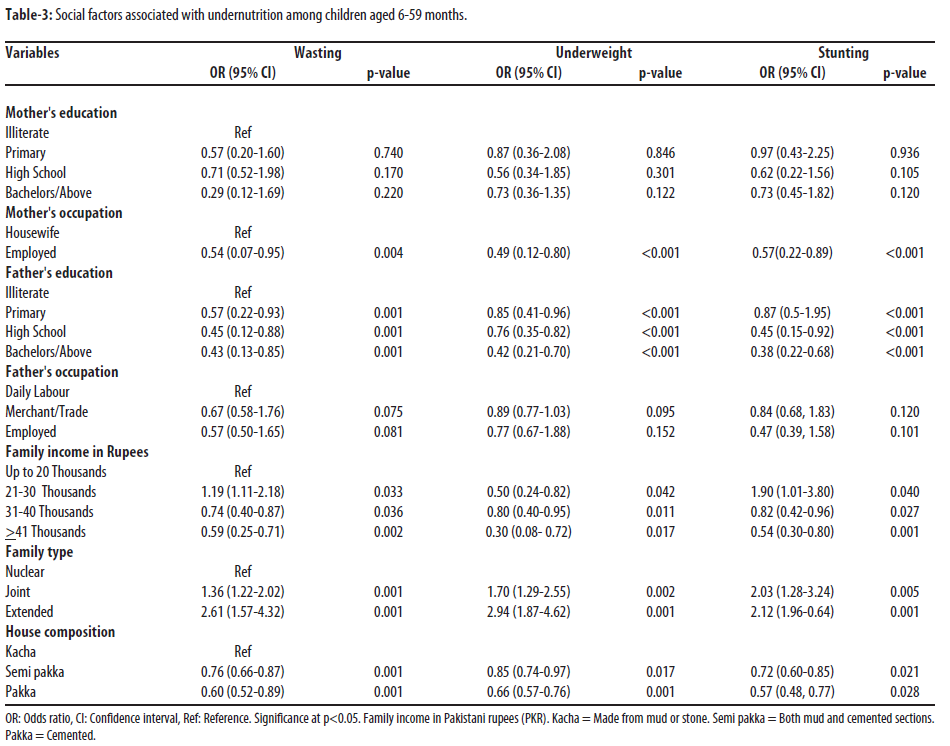 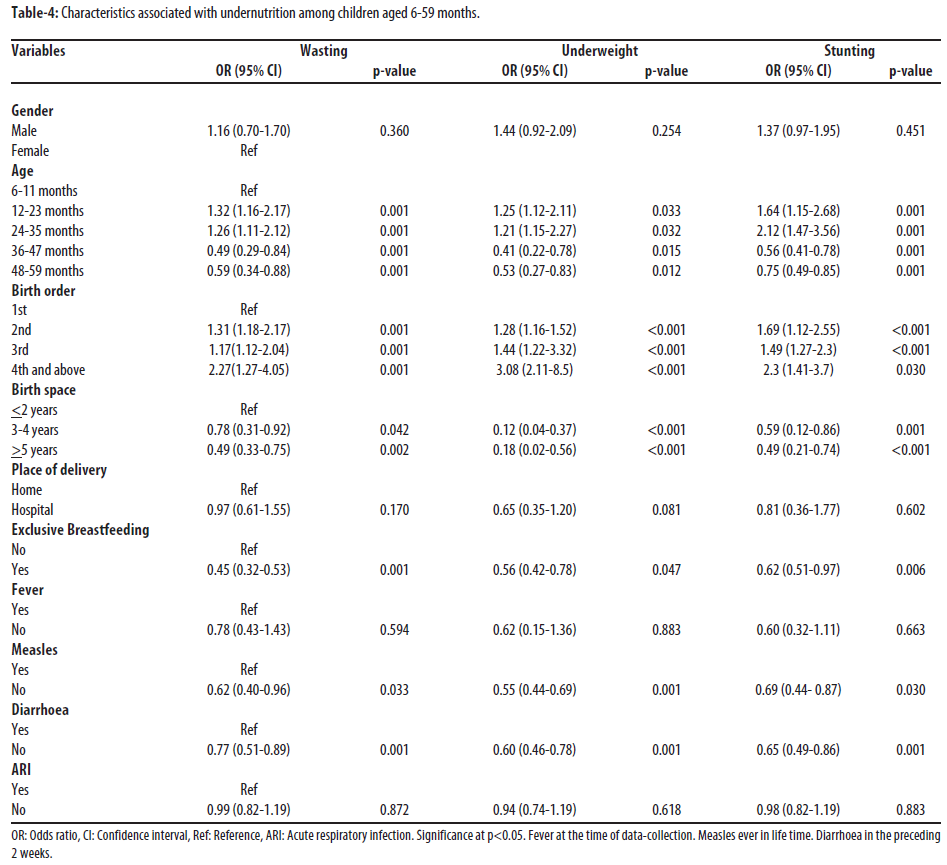 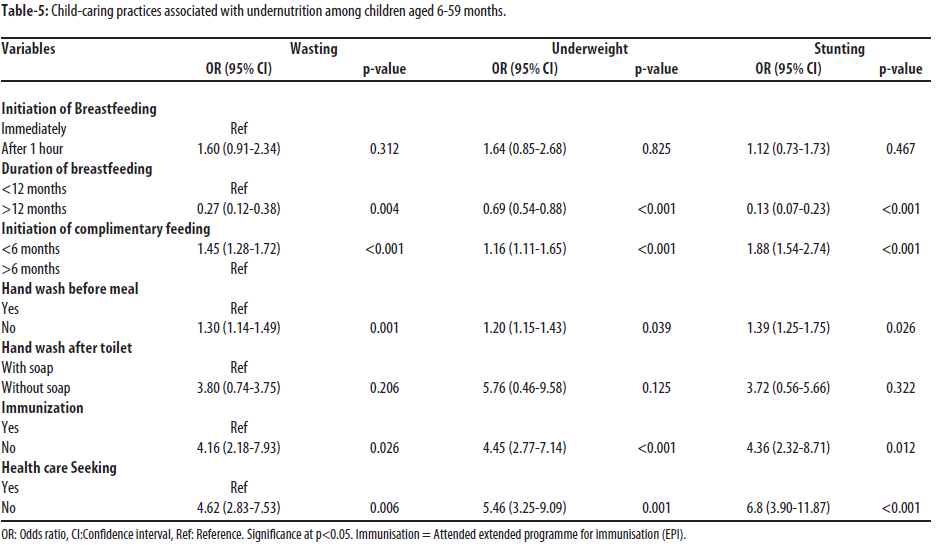 Maternal characteristics, like the number of children, ANC visits, health status during pregnancy, extra food during lactation and autonomy in decision-making regarding money expenditure were significantly associated, while mother's age and extra food during pregnancy were not significant association with undernutrition among the children (Table-6). 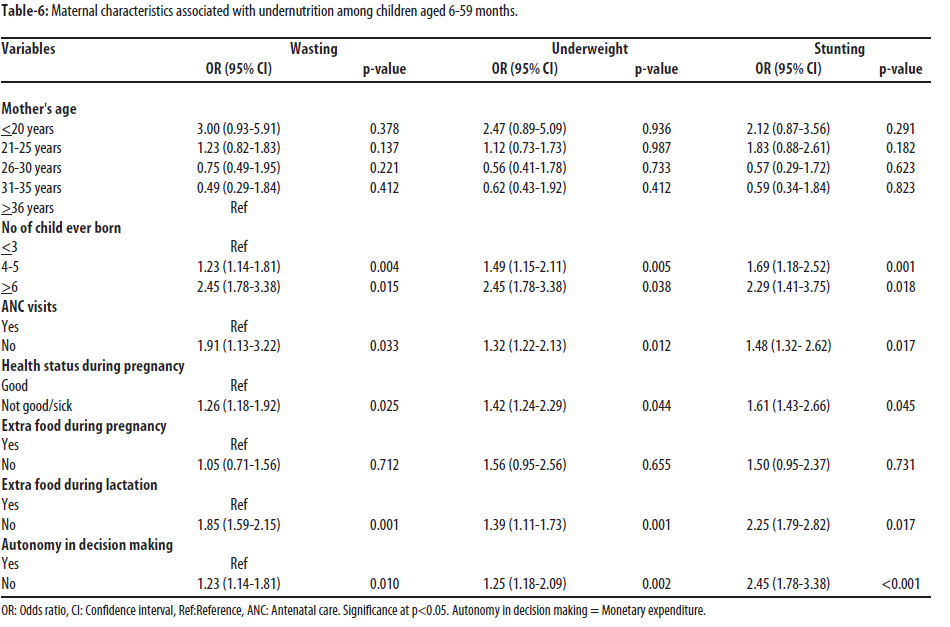 Undernutrition among children aged 6-59 months was widespread in the study area. The findings were higher than the overall provincial  and national data, which might be due to the low socioeconomic status of people in the area.8,23,24

The current study's findings about maternal education matched those of a study conducted in the Democratic Republic of Congo.30  However, other studies established a significant association between maternal education and children undernutrition.31,32  The findings related to mother's employment status were in line with previous studies,33-35  and same was the case with the father's education level.36   The current results about family monthly income matched the findings of earlier studies,27,37  and those about the type of accommodation were in-line with a study done in rural India.38

Duration of breastfeeding and immunisation had a significant association, as proven by other studies.48,49  Children who initiated complementary feeding at age <6 months were significantly associated with higher odds for being undernourished compared to those who initiated it >6 months, as reported by a previous study.33   Children who washed their hands before the meal were significantly less likely to get undernourished, and it was also reported by a study in India.50

There was no significant association between maternal age and child undernutrition, and these observations were strengthened by a study in Africa.51   The number of children ever born to a mother had a significant association with child undernutrition, and this was supported by a previous study.52   The children of mothers who visited ANC centre during pregnancy were less likely to be undernourished, which was in accordance with previous studies.27,46  Children of mothers who were healthy during pregnancy were at less risk of getting undernourished, and the finding was parallel to a community study conducted in Somali region.53   The current study also found that children of mothers who had autonomy in decision-making regarding money expenditure had significantly lower odds for being undernourished, which was in-line with findings reported by a study in Bangladesh.54

Children of households having latrine facility had significantly fewer chances to be undernourished, and similar results were reported by a previous study.55

In the light of the findings, it is obvious that the situation may worsen over time if necessary actions were not taken today. The relevant health department should consider the issue of undernutrition in its service delivery, and the ministry concerned should design and strengthen nutrition interventions and promote activities related to undernutrition in the study area. Training regarding nutrition for healthcare providers must be arranged, while the community should be sensitised regarding nutrition education and the need to have a balanced diet.

Furure studies should explore the effect of undernutrition on health and intellectual ability of children at the school level.

Undernutrition was found to be widespread among children aged 6-59 months in Tehsil Battagram, and it was considered to be an issue of "very high" public health significance, according to WHO standards.

Acknowledgements: We are grateful to all the mothers who volunteered to participate in the study, and to the Battagram District Health Office for support and cooperation.

4.      Khattak UK, Iqbal SP, Ghazanfar H. The Role of Parents’ Literacy in Malnutrition of Children Under the Age of Five Years in a Semi-Urban Community of Pakistan: A Case-Control Study. Cureus. 2017; 9:1316.

20.    WHO. WHO Child growth indicators and their interpretation. [Online] [Cited 2019 October 05]. Available from: URL: https://www.who.int/tools/child-growth-standards/standards

35.    Habaasa G. An investigation on factors associated with malnutrition among underfive children in Nakaseke and Nakasongola districts, Uganda. BMC Pediatr. 2015; 15:134.