Objective: To determine the role of systemic steroids in cystic fibrosis patients and its effects on pulmonary exacerbation in children and adolescents.

Method: The retrospective cohort study was conducted at the Aga Khan University Hospital, Karachi, and comprised data from January 2015 to December 2019 of cystic fibrosis patients aged 3-18 years hospitalised with pulmonary exacerbations. The patients were divided into systemic steroid group A and non-systemic steroid group B. Patients in group A received parenteral steroids during acute exacerbation of cystic fibrosis in the first two weeks of admission, while those in group B did not receive systemic steroids. Length of hospital stay and number of days on oxygen support were compared between the groups. Data was analysed using SPSS 22.

Conclusion: Systemic steroid usage during hospitalisation for acute exacerbation of cystic fibrosis was associated with decreased duration of oxygen requirement with standard treatment.

Cystic fibrosis (CF) is an inherited, multisystem disease most commonly occurring in Caucasians.1   It occurs in approximately 1:3000-4000 Caucasian live-births and is one of the most common autosomal recessive causes of mortality among newborns.2   It is less common in other ethnicities with an incidence rate of 1:30,000 in Asian-American population.3   It is an underdiagnosed disease in Pakistan and its exact prevalence is not known due to lack of awareness and availability of diagnostic genetic testing and newborn screening tools.4

CF is caused by mutation in cystic fibrosis transmembrane conductance regulator (CFTR) gene, leading to dysfunction in the expression of chloride channels responsible for transfer of chloride ions at the apical cell membrane level, which in turn causes disrupted chloride and fluid balance.5,6  This leads to a chronic life-limiting disorder, which mainly affects the respiratory tract, pancreas and gastrointestinal tract (GIT). In the respiratory tract, hyper-viscous secretions lead to mucus plugging of the airways, resulting in increased susceptibility to respiratory tract infection (RTIs) and precipitating respiratory insufficiency.7,8  It also promotes bacterial colonisation and neutrophil-dominated airway inflammation with consequent lung damage (bronchiectasis), and eventually respiratory failure and death. Lung inflammation commences very early in life, and may be present even in those without clinical manifestations of the disease.9   Excessive inflammation and lung damage has implications for the quality of life (QOL) and slowing down the rate of lung disease progression is an important goal in CF management.10,11

This inflammatory process makes it evident that the use of anti-inflammatory medications would help in improving QOL. There is still no ideal anti-inflammatory agent available. The current study was planned to assess the role of systemic steroids in CF children hospitalised due to acute exacerbations.

The retrospective cohort study was conducted at the Aga Khan University Hospital (AKUH), Karachi, and comprised data from January 2015 to December 2019. Patient data was approached after approval from the institutional ethics review committee. Data of all consecutive patients was included if it related to CF children of either gender aged 3-18 years hospitalised with pulmonary exacerbations (PEx). Data of CF patients with diagnosed asthma or allergic bronchopulmonary aspergillosis (ABPA) and those on regular oral or intravenous (IV) steroids before exacerbations were excluded. The diagnosis of cystic fibrosis was established on positive sweat chloride test (>50mmol/l), with clinical manifestations suggestive of CF, supported by gene test results.8,12 The only available genetic test available at AKUH was Delta F 508.

Tablet prednisolone 1-2mg/kg/day or equivalent IV steroids were used in group A for 5-7 days followed by slow tapering of the dose for another week. As the dose of steroid was tapered after 5-7 days of therapy and these patients were not on high dose for long, no short-term side-effects were documented. The two groyps were analysed for average length of hospital stay (LOS) (days) per exacerbation, and days on oxygen support.

All patients received double coverage for pseudomonas depending upon the culture and sensitivity of last sputum cultures for at least 14 days. All admitted patients were started on IV antibiotics and, depending upon the sensitivity and severity of disease, they were either continued on IVs or oral antibiotics to complete the drug course. Usually, combination of ceftazidime with amikacin was used, but in patients with resistant pseudomonas, combination of piperacillin/tazobactum and amikacin was used. Majority of the patients discharged after 5-10 days on IV antibiotics and completed their course on day-care or as outpatient follow-ups.

Online pharmacy data and individual patients' chart were reviewed to ensure compliance while dividing the patients into groups.

CF PEx were defined as CF patients who were admitted to hospital and started on IV antibiotics and presented with respiratory distress requiring supplemental oxygen therapy, increased frequency of cough, increased sputum production, increased work of breathing, and/or new crackles on auscultation or new radiological finding on chest X-rays (CXRs) as new consolidations ± collapse or infiltrates.13,14 Tracheal swab or sputum cultures were documented for the growth of organism during the study period. Hypertonic saline was used as per standard protocol in every patient admitted with exacerbation followed by chest physiotherapy. Percentage of hypertonic saline depended on the thickness of sputum that vary 3-7%. The physiotherapy team had dedicated experts in chest physiotherapy trained to use different methods for improving pulmonary hygiene, including chest percussion, blowing exercises and by using equipment including incentive spirometer, acapella and vests.

Data was analysed using SPSS 22. Continuous variables were expressed as mean and standard deviation, while categorical variables were described as frequencies and percentages. Independent variables included age, gender, height and weight on admission, duration of hospitalisation, sputum culture results and steroid use during hospitalisations. Data was assessed for normality, and independent sample t-test was used to assess significant difference between continuous variables, and chi-square test was used for categorical variables. P< 0.05 was considered statistically significant with a type I error of 5%.

Of the 124 patient charts evaluated, 84(67.7%) were included; 40(47.6%) in group A and 44(52.4%) in group B. There were no significant differences between the groups related to age, age at diagnosis, weight, height, PExs, regular use of intermittent azithromycin, use of inhaled long-acting beta agonist (LABA) and pseudomonas colonisation (Table-1). 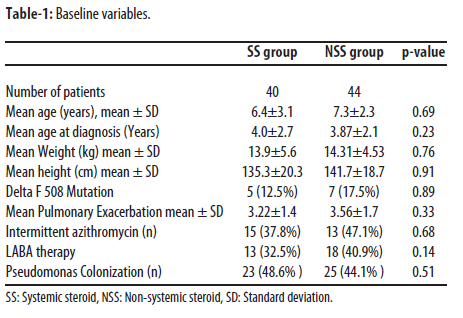 Group A had significantly fewer days on oxygen support compared to group B (p<0.001), but there was inter-group difference in mean LOS (p=0.53) (Table-2).

Boxplot graph was used for visual representation of data (Figure). 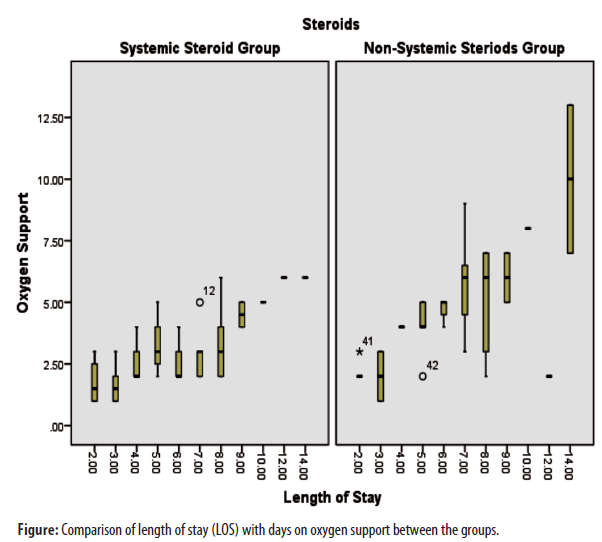 In the current study, the use of systemic steroids significantly reduced the number of days on oxygen support for a patient with PEx and consequently decreased morbidity compared to non-use of systemic steroids. However, no significant difference was seen in mean LOS between the groups. This could be attributed to the fact that patients are usually discharged after completion of IV antibiotics course to avoid further complications and to ensure compliance to pre-empt antibiotic resistance.

Glucocorticoids (corticosteroids) have been widely used for a number of inflammatory diseases, including lung problems, such as asthma and chronic obstructive pulmonary disease (COPD), as they are widely known for their role in preserving lung function even though their exact mechanism of action is not known. However, corticosteroids act as potent anti-inflammatory drugs during PEx in CF by directly inhibiting leukocyte activation, neutrophils and chemotaxis, therefore interfering with synthesis and response of inflammatory mediators. Long-term usage reduces mucus production, hence improving lung function.15

This anti-inflammatory action of steroids exhibits that they can be used as affective adjuncts to standard care for treatment of CF exacerbations as inflammation in this stage is known to be the greatest.

There are multiple international guidelines on PEx management.12,16,17

Previous studies that examined the role of corticosteroids during PEx in CF patients concluded that alternate-day use of steroid at a dose of 1-2mg/kg helps improve lung function, but long-term use is associated with a significant number of side effects.18,19  A pilot study demonstrated improved pulmonary function after steroid usage in CF patients hospitalized for PEx when compared with placebo, but the results were not clinically significant due to small sample size.20

One randomised control clinical trial (RCT) noted an improved lung function in patients who were on systemic steroids during acute exacerbations when compared to the placebo group, which is in line with the finding of the current study.21

Keeping in view their efficacy, affordability and relatively low side-effect profile during short-term use, systemic steroids can be a great adjunct to standard care options. Prolonged use is not recommended as it can be a source of a number of adverse effects, such as Cushing syndrome, acne, bruising, muscle wasting, and, in high doses, it can precipitate diabetes mellitus, osteoporosis, cataract formation and growth suppression.22

To the best of our knowledge, the current study is the first in Pakistan to establish corticosteroid's role in CF, but the study had certain limitations due to the unavailability of pulmonary functions tests and forced expiratory volume in the first second (FEV1) values during PEx. Also, due to the retrospective nature of the study, long-term side effects of steroids could not be assessed. As the sample comprised individuals from lower middle-income population in a resource-limited setup, genetic testing was not available. Prospective cohort studies or clinical trials are recommended for better understanding the utility of corticosteroids.

The use of systemic steroids during hospitalisation for acute exacerbation of CF was associated with a lower rate of oxygen support requirement with respect to standard treatment. There was, however, no difference in LOS between the groups.