Objective: To determine relationship between health-promoting behaviours and loneliness, and between life satisfaction and self-rated health among the elderly.

Method: The cross-sectional study was conducted from June to November 2020 in Aydin, Turkey, after approval from the ethics review committee at Ege University, Izmir, Turkey, and comprised individuals of either gender aged >65 years. Data was collected through face-to-face interviews using a data-collection form with questions to identify independent variables and the geriatric health protective behaviour scale. Data was analysed using SPSS 23.

Conclusion: Health-promoting behaviours are affected by an individual's socioeconomic conditions as well as their life satisfaction, feeling of loneliness and perception of health.

Healthy aging is described as a life-long process aimed at optimisation of opportunities for improving and maintaining health and ensuring a successful life. It is important to consider healthy aging as an objective of public health.1,2  Health-promoting activities have increased importance for maintaining extended lifetime in an independent and healthy manner upon increase in life expectancy. Health-promoting behaviours allow the elderly to live without depending on any other individual in their daily life.3,4  Many health issues observed among the elderly may be prevented through lifestyle modifications. Healthy lifestyle allows wellness of an elderly person and recovery, maintenance and improvement of health. It is never too late to stop with risky behaviours. It is possible to start a healthy lifestyle during old age, like exercising, healthy diet, quitting smoking, etc.5

Loneliness, which is a subjective phenomenon resulting from the inconsistency between the actual and desired levels of social contact, is defined as a painful experience accompanied by negative emotions.10   Loneliness has adverse effects on individuals' health, wellbeing, life satisfaction and health-promoting behaviour. Loneliness is especially important for the elderly because of their physiological changes, special aging conditions and vulnerabilities.11   A vicious circle between social isolation and low-level health-promoting behaviours can eventually lead to negative health outcomes. Lower levels of social integration and social contact can affect older adults' health-promoting behaviour.12

The proportion of Turkish older adults aged 60 and over reached 9.5% of the country's population in 2020. The elderly population has increased by 22.5% in the last five years in Turkey. Of the older people, 18.6% live alone at home.13   Changes in economy and culture in Turkish society in recent years and life events in the aging process have made the shrinkage of social networks more evident among the elderly. Social isolation, which is one of the important factors related to the health of the elderly, arise from these facts, defined as the absence of a support system, minimal contact with others, and/or generally low participation in community life.12

Old age is a period during which people are most vulnerable and weak. However, old age should not be associated with being unhealthy. Being healthy is not only an individual concern, but is a social responsibility.14   Therefore, it is important to determine factors that have positive and triggering effect on health improvement practices, and causes that prevent these efforts.

The current study was planned to determine the relationship between health-promoting behaviours and loneliness, and between life satisfaction and self-rated health among the elderly.

The cross-sectional study was conducted from June to November 2020 in Aydin, Turkey. After approval from the ethics review committee at Ege University, Izmir, Turkey, the sample size was calculated using Epi-Info 7.0 with 95% confidence interval (CI) and 50% prevalence. The target group was elderly individuals aged >65 years living in the Aydin province where the population of the elderly is 12.8%.13 Those included were those aged >65 years regardless of gender with the ability to establish communication and willing to participate in the survey and answer the questionnaires that were completed through home visits and face-to-face interviews after furnishing informed consent.

The study questionnaire had two sections. The first section consisted of 20 questions aimed at determining age, gender, educational status, marital status, children, housing status, income perception, chronic diseases, satisfaction with life, social support status, health perception and disability, if any. Geriatric health protective behaviour scale (HPBS) was used. The scale was developed by Wang et al, and validity-confidence studies in Turkish were performed by Gulsoy.14,15 HPBS consists of 22 items and is scored on a 4-point Likert scale; 1 = Never, 2 = Sometimes, 3 = Frequently and 4 = Regularly. The total score ranges 22-88. HPBS has for subscales; Health patterns, Social participation, Responsibility for health, Healthy diet, Regular exercise and Dental health. HPBS score is the total score of the subscales, with high scores indicating better behaviours that promote health in connection with each subscale. In this study, Health patterns, Social participation, Responsibility for health, Healthy diet status of the elderly were evaluated. Cronbach alpha factors of sub-dimensions in the original scale vary between 0.64 and 0.94, while the scale's total Cronbach alpha value is 0.87.7,11

Life Satisfaction was assessed with a question concerning the level of overall life satisfaction on the basis of responses from low satisfied to very satisfied. Self-rated health was assessed by a single item asking, "In general, how do you evaluate your health at present?" The answer ranged from very poor to very good. Loneliness was determined with a single yes-or-no question. "Do you feel lonely?

Simple random sampling was used to select one eligible older person among permanent residents. The elderly who could not communicate cognitively were excluded.

Data was analysed using SPSS 23. Descriptive statistics were expressed as frequencies, percentages, mean and standard deviation. In addition, t-test and variance analyses were performed for independent groups. Since the data had normal distribution, parametric tests were used. Statistical significance was taken as p<0.05. 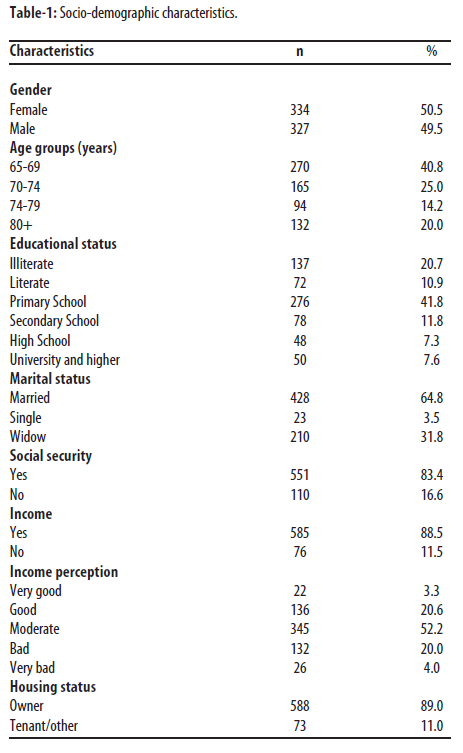 Regarding all activities, mean HPBS score was 54.80±11.65. Of the total, 55(8.3%) exercised for 30 minutes every day, while 46(7% exercised 30 minutes 3 times a week (Table-3). Subjects aged 65-69 years, who had secondary education, whose perception of household income was good, who were not disabled, who did not feel lonely and who were regularly visited had higher scores (p<0.05). 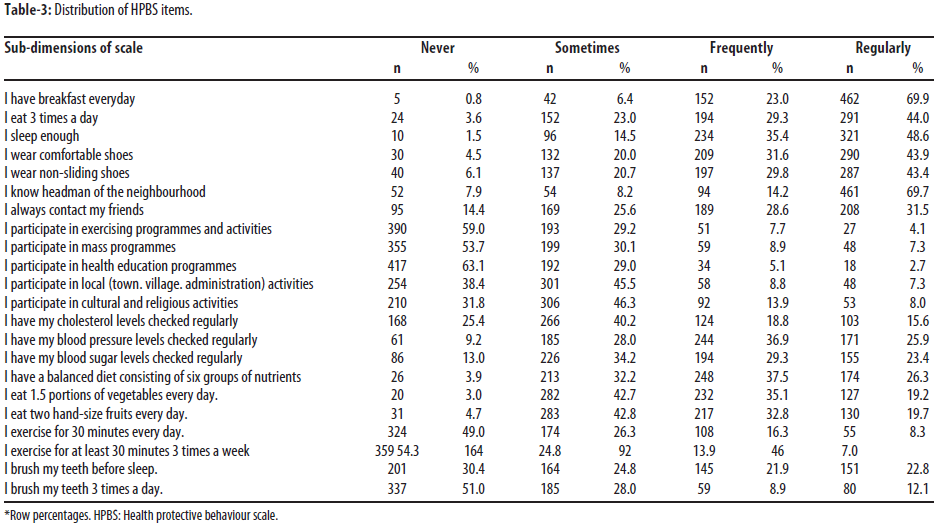 Subscale scores and overall HPBS scores were stratified according to socio-demographic status (Table-4) and health status (Table-5) of the participating individuals. 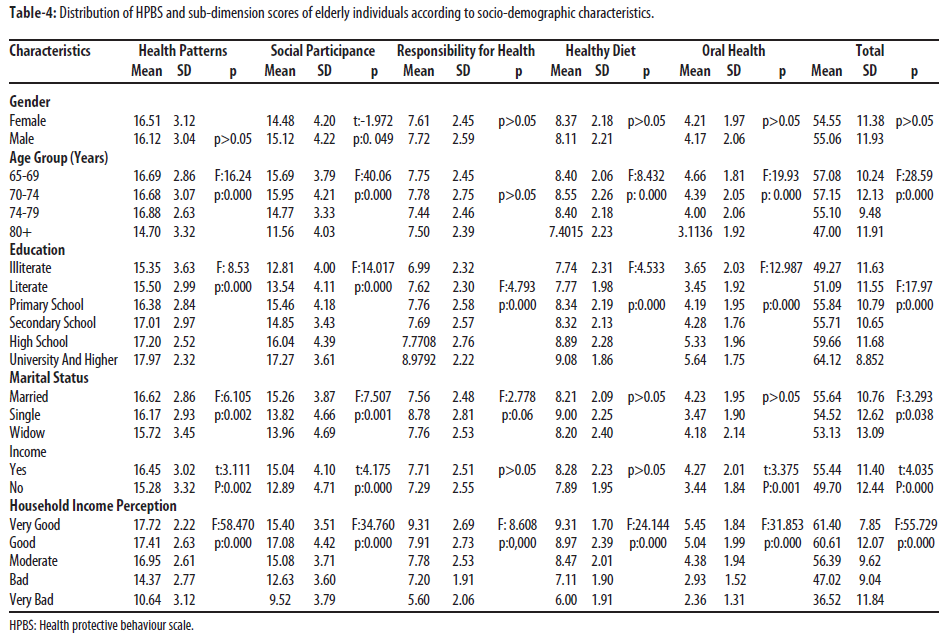 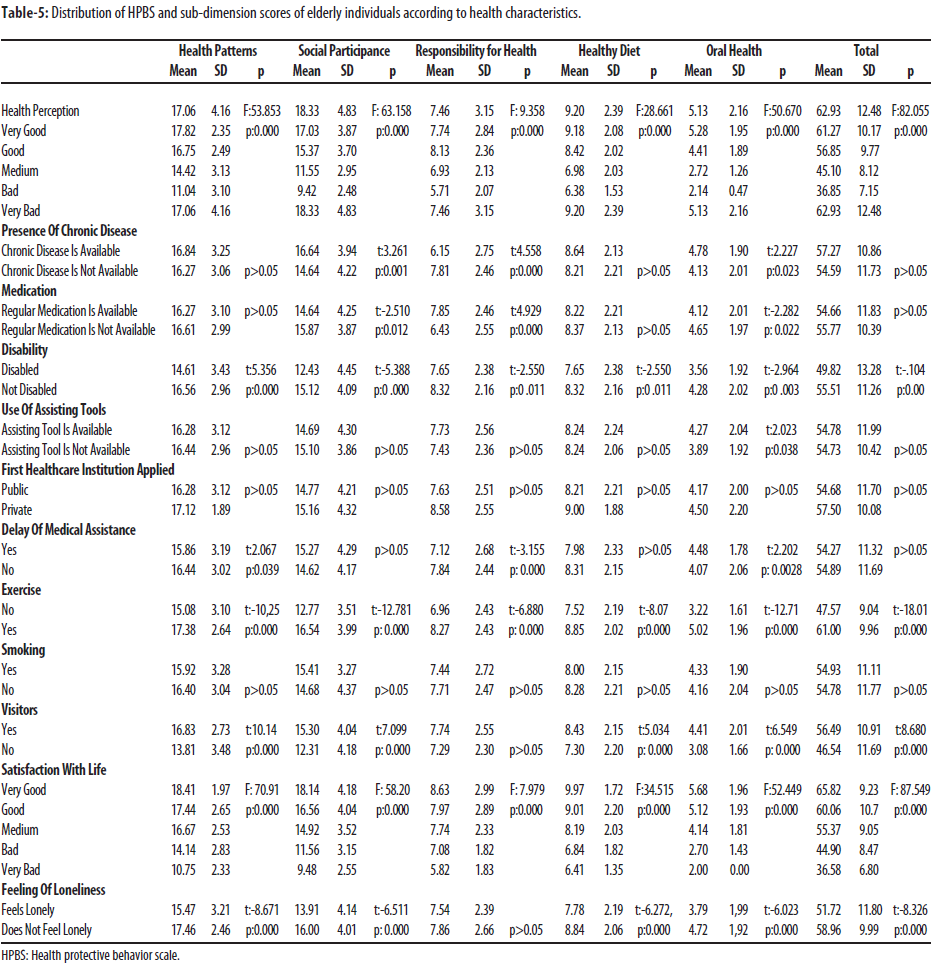 In the current study conducted in Aydin, Turkey, mean value of the score on health-promoting behaviours was at a good level (54.80±11.65). Higher mean values were obtained in studies conducted in 2 different locations in Turkey by using the same scale.15,16  It is emphasised that regulations in the life of the elderly and the place they live in affect health-promoting behaviours. Social and cultural factors are underlined in connection with behaviours that promote health. Cultural norms, religious beliefs affect the way of thinking, believing, decision-making and acting; thus, they also affect health and healthy aging.17

Elderly individuals in the current survey recorded the lowest score with exercise which is a healthy living habit. Researchers reference factors beyond the control of an individual as external impediments before improvement of lifestyle, and consider internal impediments to be factors that are based on self-decision mechanism.18   In particular, it is more advantageous to attain these behaviours before transition to the old-age period. However, work and household chores, as well as attitude of the patriarchal society are the most important impediments for women. Economic dependence of women, social suppression in many aspects of life and discrimination based on gender are other factors in this regard. A study in Iran suggested that women cared about expectations of their parents, children, grandchildren and spouses before their own health.19

Females and males scored different points in all fields of the scale used in the current study. Males scored significantly higher points only in terms of social participation. Some studies suggest that females scored higher in the subgroup of healthy diet.20   In a study in Iran, the score of health-promoting behaviours was higher for females without any significant difference.21

The age group 65-74 years scored higher in the current study. This result may be the outcome of the fact that functional skills are better and chronic diseases are less in the youngest group among the elderly. Other studies report age as the most important factor determining health-promoting behaviours.15,21  The present study determined that individuals at secondary education level scored higher on scale and subscale terms. Previous studies emphasised that the elderly can attain and implement healthy behaviours through education.21,22  In the present study, married individuals scored higher points in subscales of healthy habits and social participation. Single individuals scored differently in the subscale related to responsibility for health. Previous studies also reported that married individuals usually scored higher.3,6  In the current study, income also appeared to be a very important factor. Previous studies suggested that lack of income or low income were risk factors.1   The current study showed that elderly individuals with chronic disease scored higher points. As individuals suffering from chronic diseases are subject to frequent follow-ups and health warnings, they are likely to achieve better results in improving their attitude toward protecting and maintaining health. Similar findings have been reported earlier.15

The present study revealed that social support and visitors were important for health-promoting behaviours as much as they are important for not feeling lonely. Similar situations have been emphasised in other studies.15   In a study conducted in Turkey, it was revealed that the prevalence of loneliness in the elderly ranged from 26.3% to 61.8%.23   The feeling of loneliness intensified due to the increase in social isolation of the elderly during the coronavirus disease-2019 (COVID-19) pandemic process which coincided with the duration of the current study.

The current study revealed a positive correlation between self-rated health and HPBS scores of the elderly. It is emphasized in the literature that the elderly with better health perception have better health promotion behaviours.1,25  The present study showed that oral health score affected many aspects among the elderly and they scored lower points in this regard. Oral and dental health affects overall physical health. It has been stated that the elderly frequently experienced dental health problems, and protective services and services aimed at promoting oral health need to have higher priority.26

Those who manage to live a healthy life can achieve functional independence, self-care through self-management, social development, and make social contribution. The need is to develop programmes to promote health through daily activities or lifestyle among the elderly.27   Practicable and cost-effective policies in this regard are important.[28 In particular, it has been underlined that programmes are needed that will allow transformation of gender dynamics in a patriarchal society.21

The limitations of the current study included its single-city approach, and self-reported data which has a chance of bias. Besides, the descriptive design did not allow the study to explore causality. However, despite the limitations, the study gives an idea about Turkish people in terms of cultural status, social patterns and religion.

Nurses are competent to offer routine health promotion services for all age groups and in any healthcare environment. Health promotions services provided to the increasing elderly population by nurses and all healthcare employees hold the key to offering sustainable healthcare and social services.

7.      Laurola HE. Older people’s self-perceptions of health and life satisfaction in the Philippines-A mixed methods application of the capability approach to monitoring and evaluating local health interventions. MS thesis. Utrecht: Department of Human Geography and Planning, 2017.

15.    Gülsoy H. The effect of self-care training given to elderly individuals on improving health. Turkey: Istanbul, 2017.