Objective: To translate and validate the Urdu version of stroke impact scale-16 for Pakistani society.

Method: The prospective cohort study was conducted from February 2018 to February 2020 after approval from the ethics review board of The University of Lahore, Lahore, Pakistan, and copmprised patients with mild to moderate stroke who were recruited from five public and two private hospitals of the Punjab province. Established guidelines were followed to translate the Stroke Impact Scale-16. The patients were concurrently evaluated on Barthel Index, Stroke Rehabilitation Assessment of Movement, Modified Rivermead Mobility Index, Modified Rankin Scale, Short Form 36 Health Survey Questionnaire and the Hospital Anxiety and Depression Scale to assess the validity of Stroke Impact Scale-16, and spearmen correlation coefficient was used to determine the correlation among the scales. Analysis of variance was employed to determine the discriminant validity. Intraclass correlation coefficient, weighted kappa, Cronbach's alpha and item-total correlation were calculated to establish the stability and consistency of Stroke Impact Scale-16. Data was analysed using SPSS 25.

Results: Of the 90 patients, 50(55.5%) were females and 40(45.5%) were males. The subjects were aged 50-80 years. The correlation of Stroke Impact Scale-16 was strong with the established tools and ranged from 0.78 to 0.91. The discriminant validity was also significant (p<.001) across all Modified Rankin Scale levels. The Intraclass correlation coefficient was 0.94 and Cronbach's alpha was 0.91 for test-retest reliability and internal consistency, respectively. All corrected item-total correlation values exceeded the priori minimum standard (>0.40) and ranged from 0.51 to 0.68. The weighted kappa for item reliability also achieved priori criteria (>0.40) and ranged from 0.53 to 0.88.

Conclusion: With slight modifications, the Urdu version of Stroke Impact Scale-16 was found to have satisfactory psychometric properties and can be used in clinical and research settings for stroke survivors in Pakistan.

There is a pressing demand in neurorehabilitation and clinical research to include subjective wellbeing as an essential health outcome. Although performance-based functional tools are considered necessary,1  self-reported physical functioning scales are increasingly being valued in rehabilitation to design appropriate therapeutic interventions for stroke patients.2  Patient-reported physical functioning instruments with suitable psychometrics are still scarce in Urdu language for Pakistani stroke patients because such scales are mostly available in English or foreign languages. Since only a small proportion of the Pakistani population can read and understand English,3  their widespread use in clinical and research settings is limited. It is a well-known fact that a simple translation does not warrant its use in clinical and research settings and may lead to an instrument that is not equivalent to the original.4,5 Therefore, healthcare professionals face a dilemma; whether to develop a new instrument in a native language or to test the psychometric properties of the well-established outcome measure in the local environment and context.6  The development of scale is a costly and laborious process.6  In contrast, the latter option is more economical and allows comparison of results with national and international data.7

To cover the Nagi model domains, the clinicians and researchers usually combine the Stroke Impact Scale-16 (SIS-16) with other health outcome measures due to its brevity and good psychometric properties.8  SIS-16 is a disease-specific and self-reported outcome measure used to capture stroke impact on survivors' physical functioning.9,10 SIS-16 demonstrated a better ability to capture stroke consequences, particularly in mild to moderate stroke, compared to other scales, such as the Barthel Index (BI), which have shortcomings of a severe ceiling effect.11

The current study was planned to translate and validate the Urdu version of SIS-16 for Pakistani patients. The stability of the reliability and validity of the Urdu version would provide therapists working in neurological rehabilitation with an option to select a patient reported outcome measure (PROM) that guide them to choose the most appropriate interventions for their patients.

The prospective cohort study was conducted from February 2018 to February 2020 at various hospitals in the Pubnjab province of Pakistan, and allowed data collection at two time points (T1 and T2). The design assumes that a subclinical or no change occurs between T1 and T2.

After approval from the ethics review board of The University of Lahore, the sample size was calculated according to COnsensus-based Standards for the selection of health status Measurement INstruments (COSMIN) guidelines for psychometric testing of PROM.12  The sample was raised using consecutive sampling technique from five public-sector facilities, including district headquarter hospitals (DHQs) at Okara, Sahiwal, Multan, Qasur and Pakpattan, and two private hospitals, including Al-Shafi Hospital and the The University of Lahore Teaching Hospital. Those included were patients of either gender aged 50-80 years with acute or chronic stroke regardless of its haemorrhagic or ischaemic or recurrent nature. They were able to read and write Urdu, and had a minimum education up to 5th grade. Stroke patients with communication difficulties, such as those with aphasia or reduced consciousness, and stroke survivors with the inability to walk independently were excluded.

After taking consent from the patients, baseline data was collected regarding age, gender, type of stroke and duration since diagnosis.

In the first phase, translation and back-translation of SIS-16 was done in line with guidelines proposed by Beaton et al. in 2004 and the World Health Organisation (WHO) in 2014.4,13 This phase consisted of five progressive stages. In the first stage, two independent bilingual translators with specialist knowledge of English and Urdu were invited from the United Kingdom to translate the SIS-16 into Urdu. One translator had a non-medical background, while the other was a physiotherapist with more than 10 years of experience in stroke rehabilitation with the National Health Services (NHS). The two translators and an observer then synthesised the results and produced a consensus translation of SIS-16 in the second stage. Two back-translators with a non-medical background were then invited to back-translate the Urdu version of SIS-16 into the source language. They were blinded to the original version of SIS-16 and had no prior understanding of the scale. An expert committee, consisting of translators, methodologists and researchers, produced the Urdu version of SIS-16 for cognitive testing. In the final stage of this phase, eight patients self-completed the SIS-16. An expert with more than 6 years of experience in stroke rehabilitation cognitively debriefed the scale on these stroke patients to investigate their understandability of the Urdu version of the scale (USIS-16). A final version was then produced for field testing (Appendix).14 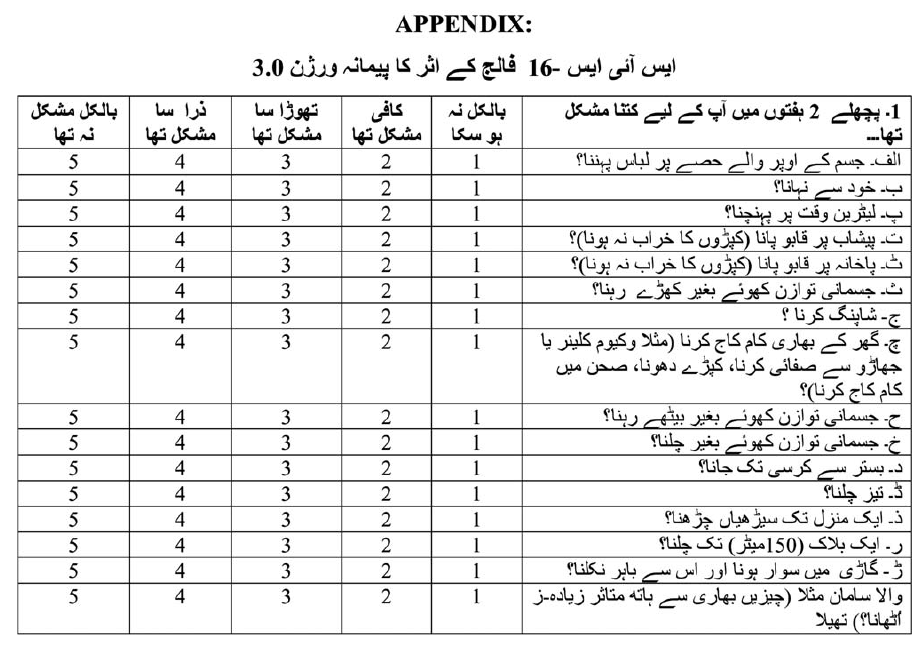 The second phase of the study comprised testing of psychometric properties, like internal consistency, item-domain correlation, test-retest reliability and construct validity. The validity of the USIS-16 was calculated by administrating the following battery of outcome measures with USIS-16 at T1: to assess the convergent validity, BI, Modified Rivermead Mobility Index (MRMI), Stroke Rehabilitation Assessment of Movement (STREAM), Modified Rankin Scale (MRS) and Short Form 36 Health Survey Questionnaire (SF-36) were employed. The MRS was also used to assess the known-group validity of USIS-16. The patients enrolled in the study were reassessed at T2 after a week to determine the test-retest reliability. The questionnaire and permission to use for translation and validation of the SIS-16 were obtained from Mapi Research Trust (Lyon, France) on behalf of copyright holders, The University of Kansas Medical Centre, United States of America. The standardisation of the data-collection procedure was achieved through prior training of therapists to administer the functional stroke scales before formal data-collection.

Data was analysed using SPSS 25. An intraclass correlation coefficient (ICC) (2-way random model with agreement) and weighted kappa (quadratic) were calculated for test-retest and individual item reliability, respectively. A priori criteria of ICC >0.70 and weighted kappa >0.40 were deemed appropriate for test-retest and item reliability, respectively.15,16 The internal consistency of the USIS-16 was determined with Cronbach's alpha, and a value of >0.70 was considered standard for PROM.17  Internal consistency was further assessed by conducting an item-to-total correlation; that is, how each item on the test relates to the instrument as a whole. This approach avoids creating an unduly extended test, and values >0.40 for item-to-total correlation were deemed appropriate.18  Concurrent criterion validity compares the measure to a gold standard at the same point in time. It was hypothesised that USIS-16 would have a strong correlation (>0.70 or above) with BI as the gold standard.19  The convergent validity indicates the extent to which the tool is believed to reflect the same underlying phenomenon and correlates to outcome measures of a similar construct.20  In contrast, divergent validity assumes that different outcome measures assess unlike constructs and lack correlation.21  It was hypothesised that STREAM, MRMI and physical domain of SF-36 would show a moderate (0.30 to 0.59) to high correlation (0.60 or more) with USIS-16. In contrast, a low correlation (rS=0.30) was expected with the Hospital Anxiety and Depression Scale (HADS). Spearman's rank correlation coefficient (rS) was used to determine the convergent and divergent validity. The discriminant or known-group validity assesses the ability of the scale to distinguish between different classes of patients. Based on the MRS scale, stroke patients were subgrouped into slight, mild, moderate and moderately severe disabilities. It was hypothesised that a significant difference would exist when the mean USIS-16 score based on MRS stages would be compared. Analysis of varioance (ANOVA) was used to calculate the significance of differencesP<0.05 was set as the marker of significance. 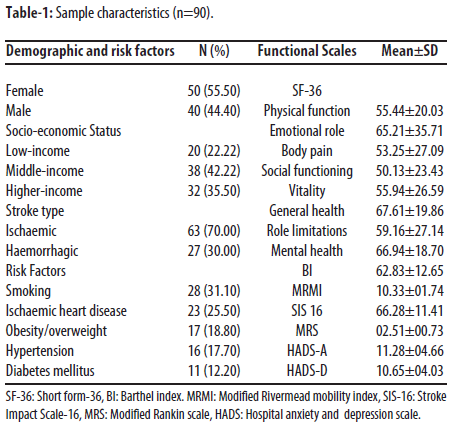 The criterion and convergent validity of USIS-16 were acceptable and demonstrated a significantly strong correlation between USIS-16 and other functional scales (BI=r0.88, STREAM=r0.91, MRMI=r0.92, and MRS=r0.78). The USIS-16 score was significantly correlated with the physical functioning of SF-36 at a higher level (r0.84). However, the physical component summary (PCS) demonstrated a moderate correlation (0.67) with the USIS-16 (Table-2). 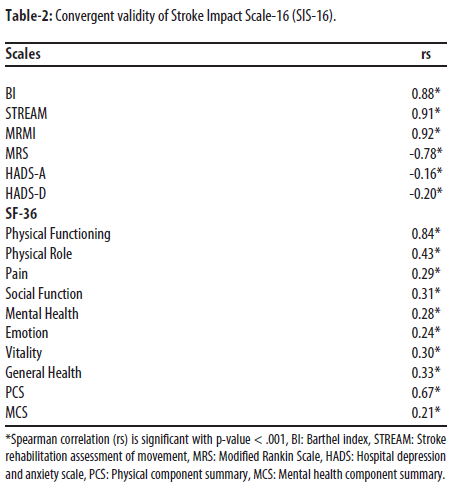 The known-group validity of USIS-16 was satisfactory as the mean score of USIS-16 tended to decrease significantly with the severity of the stroke based on MRS (Table-3).

A significant proportion of stroke patients in the current study failed to complete one item owing to cultural differences and local variability in the relevance of this item as the item, 'heavy household chores', was not usually relevant for males in Pakistani society because 66% of participants reported that they were never involved in household chores and, therefore, this item did not apply to them. This finding is not surprising considering that Pakistan is a relatively gender-segregated society where household chores are considered a part of female responsibility. However, SIS-16 provides a way to replace the missing data to estimate what they might be.

Internal consistency of USIS-16 was satisfactory according to the recommended standards (>0.70).5  This finding is consistent with the original and translated versions of SIS-16.23,24 Congruent to previous researches,23-25 the Urdu version of SIS-16 demonstrated a high correlation with the established tool. Similarly, the test-retest, item reliability and item-domain correlation were also adequate.

The Urdu version of SIS-16 was found to have satisfactory test-retest reliability, internal consistency, construct and discriminant validity. The scale has robust psychometric properties and can be used in clinical and research settings.

Disclaimer: The text is based on a PhD research thesis.

7.      Epstein J, Santo RM, Guillemin F. A review of guidelines for cross-cultural adaptation of questionnaires could not bring out a consensus. J Clin Epidemiol. 2015; 68:435-41.