An outcome of emergency vascular surgery performed by general surgeons; our experience in a university hospital of Pakistan and can they substitute vascular surgeons?

Objective: To measure the outcome of emergency vascular surgery performed by general surgeons, and to identify preventable causes of mortality.

Method: The retrospective study was conducted at the General Surgery Department of Mayo Hospital, King Edward Medical University, Lahore, Pakistan, and comprised data between January 2014 and May 2019 related to cases regardless of age and gender that required emergency vascular surgery after diagnosis by a consultant surgeon at the surgical emergency. The cases were analysed from admission till discharge. Data was analysed using SPSS 20.

Conclusion: Late presentation in hospital was the major modifiable factor improvement of which could lead to better outcome, apart from the early and proper surgical intervention.

Globally, more than 234 million major operations are performed annually and despite the burden of disease more than 2 billion people are expected to be beyond surgical care access, and majority of them are from low- and middle-income countries (LMICs). Delay of hours, even minutes, can be hazardous and potentially life-threatening in case of the patient requiring emergency vascular surgery. The increasing cases of firearm injuries and invasive medical/surgical procedures have increased the incidence of vascular injury in the United States alone. Besides, road traffic accidents (RTAs), natural calamities and civil wars have also caused an increase in cases worldwide.1-3

Besides, high-speed motor vehicle accidents, industrial hazards, street crimes, terrorist activities have also contributed to the excessive burden of vascular surgeries in regions where there is no proper vascular surgery training institution and programme to manage such huge number of cases.4,5

The proportion of general surgeons pursuing fellowship training has increased from >55% to >70% since 1992. The introduction of fellowship opportunities in newer content areas as sub-speciality is increasing day by day. The number of vascular applicants with the United States medical degrees decreased by 36% from 107 in 1997 to 68 in 20041. The number of training positions available in vascular surgery programmes accredited by the Accreditation Council for Graduate Medical Education has increased by 34% but the total number of active applicants to these programmes has decreased by 21%. In the 6th most populous country, with over 200 million people, Pakistan has only four vascular surgery programmes, and that explains why general surgeons are handling vascular surgery cases as well.4,6,7

Acute myocardial infarction (AMI) and death occur within the first 30 days after a major vascular surgery, and the associated chief events are postoperative infection, venous graft rejection/removal, higher incidences of amputation and sepsis. Methicillin-resistant staphylococcus aureus (MRSA) has emerged as the leading cause of postoperative infection in vascular surgery patients, but there were no higher incidence of morbidity or mortality except for increased length of hospital stay when compared to patients with methicillin-susceptible staphylococcus aureus (MSSA).9-11

Vascular and cardiac surgeons handle significant number of cases, and, as such, vascular operations performed by them are naturally expected to have better outcomes. In contrast, general surgeons have to build up proficiency in many other surgical procedures, and, as a result, they have minimal time to expand skill in vascular procedures.8  In Pakistan, general surgeons share the surgical workload with a minimal number of vascular/cardiac surgeons. The current study was planned to measure the outcomes of emergency vascular surgery performed by general surgeons, and to identify preventable causes of mortality.

Data was assessed for associated bleeding disorder, coagulation disorder and other associated medical or surgical illness. 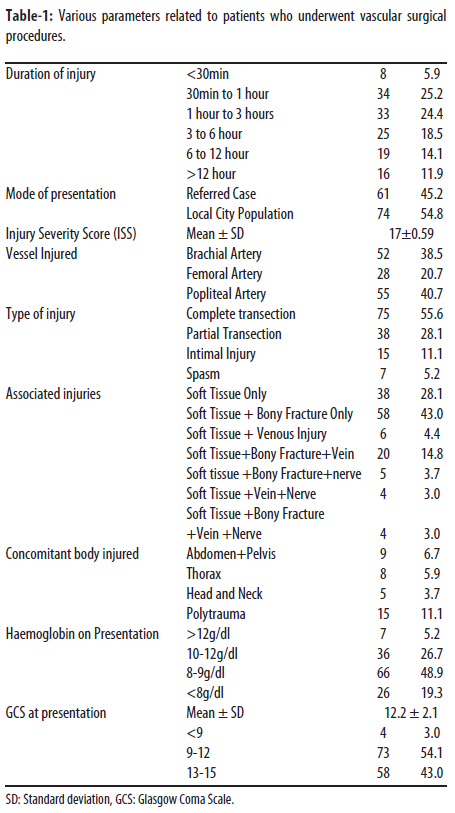 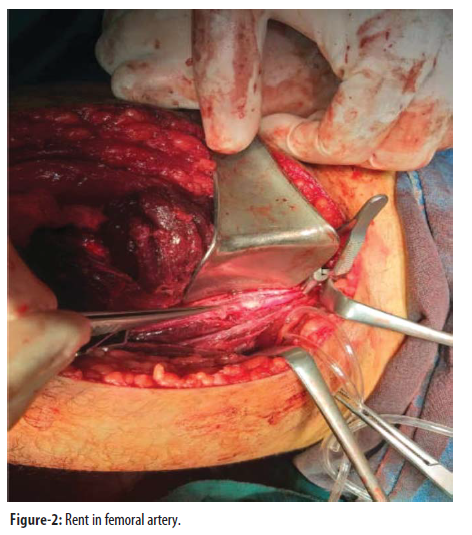 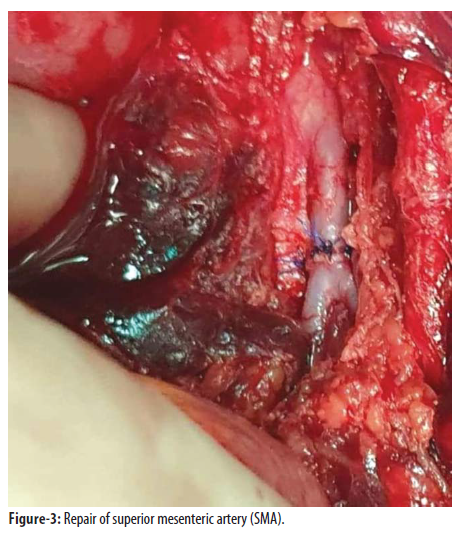 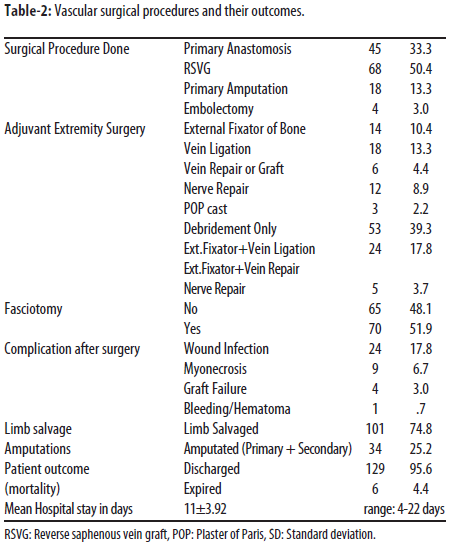 Data regarding the experience and skills of general surgeons who performed these vascular repairs showed that 2/3rd (n=12/18) of them had experience >2 years post-specialisation/fellowship. All of the surgeons (n=18) were of ages 30-40 years. Among them, 91% (n = 16/18) showed interest in performing vascular surgeries, and these included surgeons who had just completed their fellowship exam and had assisted many vascular procedures with the seniors.

The current study planned to determine the outcomes after arterial repairs done by general surgeons, and to study factors leading to complications.

A 12-month study reported that 79% of the consultations needed urgent vascular repairs, including ischaemia cases of the limbs, aortic disease and some iatrogenic injuries.12

A local study reported after collecting data from 21 non-vascular surgeons that only 14% had exposure of vascular repairs. A workshop was conducted and knowledge was assessed. Gain in knowledge was seen in 21% participants.13

Most studies based on structural measures considered the introduction of a clinical pathway or a registration system. Reports based on process measures showed promising results. Outcome as clinical indicator mainly focussed on identifying risk factors for morbidity, mortality or failure of treatment.9

In another study, data of vascular surgeries done in emergency from 2005 to 2010 was analysed. It concluded that the outcome of these surgeries was significantly related to the skill of the surgeon, and mortality and worsening morbidity was easily predicted.10  Another study14 reported that among the patients with vascular injuries requiring repairs, around 25% had popliteal injuries and the majority were males, which are similar to the results of the current study.. Overall mortality in the study was 8.5%.14  The current study had better outcomes.

Similar to the current results, a study15 reported that vascular repairs after popliteal injuries were mostly due to blunt injury in 55%, penetrating in 45% cases, and the amputation rate was 28%, with more than 80% in blunt trauma cases. These findings were close to those in the current study. Analysis of follow-up data after one year showed that 35% cases had limitation in activity.15

The most common cause in a study was firearm injuries (97.5%), while the rest stab injuries (1.5%) and blunt trauma in <1% cases. Majority cases were young males (86%). End-to-end anastomosis was done in two-third of the cases, RSVG in 8%, poly tetra fluoroethylene (PTFE) 4.5%, embolectomy 1.8% and ligation in 7%. In cases with fractures, external fixators were applied in 29% patients; fasciotomy was done in 15%; and amputation was done in 19% due to extensive injuries and delay in the presentation in emergency, with overall mortality 4.7%.16

In one study, penetrating injuries were seen in 73% and blunt in 27% cases. Only 1 patient had primary amputation. Among the patients with vascular repairs, 4% cases had major and minor amputations with no mortality.17

Another 5-year study showed results similar to those of the current study.18

A study showed data of 81 patients with mean age 28.6±14.5 years. Partial laceration was the most common arterial injury (64%) with venous grafting the common repair done (60%), fasciotomy done in more than half of the cases (68%). The limb salvage rate was 82.7% and amputations were more in blunt trauma patients, while mortality was 8.6%.19  These results were also close to those of the current study.

One study analysed data of 36 cases of arterial injuries with a mean age of 28.4±10.3 years having over 89% male patients. The most common cause was gunshot injuries (37.8%), followed by assault (27%). Mean time of presentation was around 20 hours, and 64% cases presented within 12 hours. The overall limb salvage rate was 65% and those with presentation after 12 hours had poor outcomes.20