Fungal wound infections are increasing worldwide. The aim of this retrospective study, conducted at the Aga Khan University laboratory, Karachi, Pakistan, was to determine the frequency of fungal isolation in wound specimens. Data of wound samples received for culture from all over the country between September and October 2018 was reviewed. Samples were processed for bacterial cultures and additionally inoculated on Sabouraud's dextrose medium. Demographic information, medical history and information on the type of wound was collected. A total of 140 cases were included, of which 87 (81%) were culture positive, while 10 (7%) cases yielded fungi. Burn and blast wounds had the highest proportion of fungal isolation, i.e. 2 out of 4 (50%). Candida species were the most common fungi (n=4), followed by Fusarium species (n=3). This study reports an alarming rate of fungal wound infections. As fungal necrotising wound infections have high morbidity and mortality, it is, therefore, important to accurately diagnose and treat such infections in local setting.

Wounds may be secondary to skin and soft tissue infections (SSTI), diabetes, burns, trauma, or surgical interventions. Even though bacteria remain the most common pathogen isolated from wounds, the occurrence of fungal infections is increasing.1,2 Studies report that patients who were administered systemic antibiotics had significantly higher fungal diversity.3  Moreover, wound deterioration was also linked with an increase in fungal diversity which is most likely secondary to advanced bacterial infection and administration of more antibiotics.3  Studies have reported the prevalence of fungal isolates to be as high as 22% in chronic wounds,2 71% in diabetic foot ulcer,3 8-12% in trauma patients,4  and 5-7% in combat trauma-related wounds.5

Post-traumatic fungal infections, although rare, can be lethal for patients. Due to non-specific clinical features, these cases are often misdiagnosed causing delays in antifungal treatment.4,5 The recognition of fungal isolates is also important to choose the correct treatment for bacteria in co-infections as wounds often develop bacterial and fungal biofilms with fungi providing a scaffold for bacterial attachment and offer protection and resistance against antibiotics.3  This bacterial-fungal interaction has serious implications leading to delayed wound healing.

Rationale of the study: Despite a high population of at-risk patients, no study has reported the frequency of fungal isolation in wounds in Pakistan. This knowledge is required to initiate prompt management of patients with wound infections.

The objective of this study was therefore to report the frequency of fungal isolation in wound infection samples.

The study was conducted at the Aga Khan University Hospital Karachi (AKUH) which has a College of American Pathologists accredited laboratory with >250 peripheral collection centres.

The AKUH laboratory receives samples from all over Pakistan, but mostly from hospitals within Karachi and other cities of Sindh. A comparatively lower number of specimens are received from Punjab, Khyber Pakhtunkhwa, and Baluchistan.

All tissue and pus samples received for bacteriological assessment at AKUH laboratory from September to October 2018 were included in the study. Therefore, the sampling technique was consecutive sampling. These specimens were sent to the laboratory at the discretion of the referring physician and the researchers had no control over these referrals.

Inclusion criteria: All pus, tissue, and swabs from wounds that came to the AKUH laboratory for aerobic and anaerobic culture were included.

Exclusion criteria: Sterile fluids, deep tissues from cavities, brain and bones were excluded. Duplicate samples (more than one sample received from the same patient) during the study period were excluded.

Specimen processing: All samples were processed according to the laboratory standards modified to include more selective media for mixed cultures.6  Samples were inoculated on chocolate and sheep blood agar with Colistin and Nalidixic acid incubated in 5% CO2; a triplate with MacConkey, mannitol salt and Sabouraud's dextrose agar (Figure) incubated in ambient environment; and sheep blood agar incubated anaerobically. All cases were enriched by inoculating in cooked meat broth. 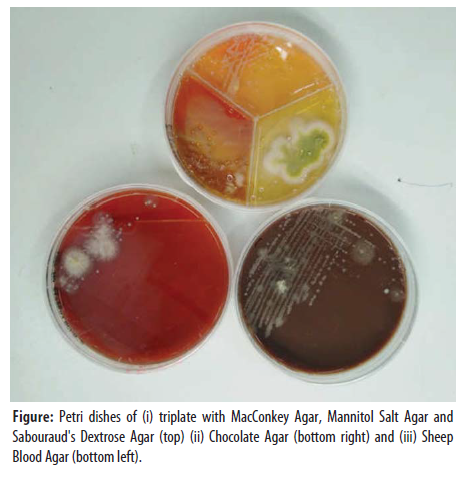 Clinical information recorded at the time of reporting was collected. Variables such as patient's age, gender, location, type of wound, and culture result were collected. The data was entered in IBM SPSS software version 23 and descriptive analysis was done.

Operational definitions: Skin and soft tissue infections: Specimens from patients with infection of skin and underlying soft tissues, fascia, and muscles. Wounds that were not acquired in the hospital, nor associated with diabetes and without history of trauma were classified as miscellaneous SSTI (mSSTI).

Nosocomial wound infection: Specimens from surgical site infections and wounds acquired in the hospital due to medical intervention.

Traumatic wounds: Specimens from patients with injuries due to road traffic accidents, violence or fractures and household accidents.

Diabetic wounds: Specimens from lesions with presence of inflammation or purulence in diabetic patients. 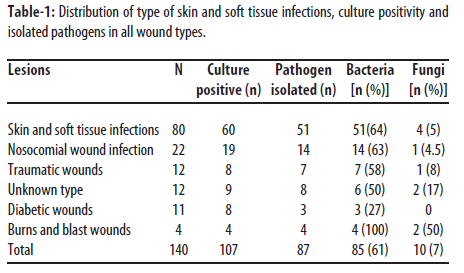 Details of fungal isolates is shown in Table-2. The most common fungal pathogen was Candida species [4 out of 10 (40%)], followed by Fusarium spp [3 out of 10 (30%)]. A total of 10 cases showed fungal isolation, of which 9 cases had single type of fungi and one case had three fungi i.e. Candida, Aspergillus and Bipolaris.

The current study reports an alarming rate of   fungal isolation [10/140 (7%)] in wound specimens. A similar study from India also reported fungal isolation in 37 out of 288 (12.8%) pus and tissue samples, of which 24 were yeast and 13 were moulds.7  Burns and blast wounds had the highest proportion of fungal isolates [2 out of 4 (50%)] followed by traumatic wounds [1 of 12 (8%)] in current study. A high rate of fungal isolation in burn patients [27 of 70 (39%)] has also been reported from Pakistan which is consistent with global data and the current study.8  Similarly, fungal infections in blast and other accidental trauma are emerging as serious complications leading to high morbidity and mortality.4,5 Fungi are prevalent in the environment, leading to contamination of open wound after trauma, especially after road traffic accidents, burns, blast injury, and other disasters.

Fungi are a leading cause of necrotising wound infections and are a significant cause of morbidity and mortality, as reported in a recent study.10  Therefore, accurate detection of fungi from wound is extremely important to improve the outcomes. Often, culture-dependent methods may underestimate fungal diversity and bioburden. A study using sequencing, a non-culture-based detection method detected fungi in 80% of the 100 cases of diabetic foot wound as compared to only 5% in culture.3  In our study, diabetic wounds did not have high fungal isolation. This may be due to the small sample size, short study duration and reliance on culture-based methods only.

The limitations of this study are a small sample size, single centre, short study period and use of culture-based technique only. However, in resource limited settings where non-culture-based methods such as sequencing are expensive, optimisation of culture using fungal selective media may increase the yield of fungi.8

The study reports an alarmingly high rate of fungal wound infections. As fungal necrotising wound infections have high morbidity and mortality, it is, therefore, important to accurately diagnose and treat such infections in local settings.

Acknowledgement: We would like to acknowledge the Aga Khan University Clinical Laboratory staff.

Disclaimer: This work was presented in the "8th Trends in Medical Mycology, 2019, Nice, France.

Conflict of Interest: The authors have no conflicts of interest to report.

Transposition of basilic vein for vascular access for haemodialysis: An experience of a tertiary care hospital

Comparison of effectiveness between Haloperidol and Quetiapine in acute manic episode