Method: The in vitro experimental study was conducted in November and December 2019 at the dental clinics of Aga Khan University Hospital, Karachi, and comprised of cylindrical composite specimens 8x4mm in size which were polymerised in Teflon moulds using light-emitting diode under constant mode in Group 1, pulse mode in Group 2 and ramped mode in Group 3. Once polymerised, each specimen was extruded from the mould and, using the International Organisation for Standardisation-4049 scrapping method, uncured resin was removed. Specimen lengths were measured with a Vernier calliper. Each specimen was measured thrice and the mean was taken as the depth of cure. Data was analysed using SPSS 24.

Over the years, composite resins have taken over restorative dentistry offering aesthetic restorations with comparable functionality.1 These monomers are photocured to cross-link polymers under visible blue light at a wavelength of 420-480nm which initiates and propagates the polymerisation reaction.2  Optimal curing throughout the bulk of a visible light-activated dental resin composite has been acknowledged as important in the clinical success of a restoration.3  The degree to which light-activated composites polymerise is proportional to the amount of light to which they are exposed.4  The presence of uncured resin within the bulk may prevent the free radical formation, reducing the depth of curve (DoC) through the bulk of the material.5  Therefore, it is recommended that a maximum thickness of 2.0mm should be maintained while placing the composite in layers6 as there is greater risk of trapping air or contaminants between the layers of conventional composite, bond failure and placement difficulty in the subsequent increments.7

Recent advances in polymer science have led to the introduction of newer bulkfill composite, SureFil smart dentin replacement (SDR) Flow (DENTSPLY Caulk, Milford, DE, United States) that claim to be able to cure up to 4mm depth compared to that of conventional composites, and is, therefore, advocated to be used in posterior teeth.8,9 The unique combination of high filler loading with modified resin provides high DoC in SDR composites than the conventional ones.10  This allows the placement of an increment >2.0mm.

Curing depth of SDR bulkfill composites in increment thickness >2mm is not a well-searched topic in accordance with LED curing modes. This gray area in literature has led to assess the effect of DoC in SDR BulkFill composite resin by LED curing modes (constant, pulse and ramped) and to determine the mode for achieving optimum DoC in order to reduce the chair time and effort in layering or adapting of posterior composites when restoring deep cavities in posterior teeth to maintain the quality of care with predictable outcome. The current study was planned to evaluate the DoC in SDR bulkfill composite resins polymerized by constant, pulse and ramped LED curing modes. It was hypothesised that there was no difference in DoC among the modes.

The in vitro experimental study was conducted in November and December 2019 at the dental clinics of Aga Khan University Hospital (AKUH), Karachi. After obtaining exemption from the institutional ethics review committee, the sample size was calculated using OpenEpi 3.0115 taking mean of polymerized composite with low curing group as 2.75±0.08 mm comparable to that of flashing mode 2.90±0.12mm13 and setting 0.05 level of significance and 80% power of the test. The sample size was inflated by 10% to cover up possible mishandling of the materials.Total sample size was therefore, 33 samples divided equally among the three groups. Composite cylinders of 8x4mm fabricated from the mould were included, while those with visible porosity in fabrication or those damaged during handling were excluded. Since the colourants may effect light polymerization, A2 shade was selected to minimise that effect.16

The cylindrical composite specimens of SureFil SDR Flow 8x4mm were fabricated in preformed Teflon-coated plastic mould by the primary investigator. A flat glass slab was placed under the mould and the microscopic slide was positioned between the mould and the slab. Bulkfill composite was then carefully placed by positioning the tip of the syringe against the wall of the mould, and slowly filling the mould to avoid air traps in the composite. The composite was polymerised using LED (Mini LED, Satelec, France) with emitting spectrum of 420-480nm into three groups. Constant mode in Group 1 activated maximum power for 10s. Pulse mode in Group 2 activated maximum power in 10 successive bursts lasting 1s, separated by 250msec. Ramped mode in Group 3 initiated a gradual rise in power lasting 10s followed by 10s at full power.

The light tip was kept 3mm to the resin composite surface by using microscopic slide as a spacer between the light tip and the composite while curing in a dark room (Figure). 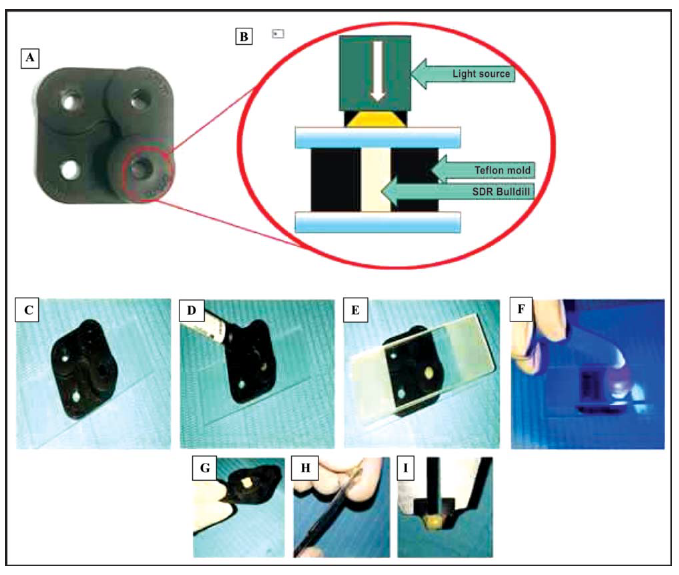 Once polymerised, each specimen was inverted to extrude from the mould and was tested using the International Organisation for Standardisation (ISO) 4049 scrapping method.17  Uncured portion was scraped away with a spatula and measured with a Vernier calliper. In order to minimise human error, each sample reading was taken three times and the mean of the three was taken as the final reading. Final DoC was taken as 50% of the total cured sample length.

The difference between Group 2 and Group 3 was statistically significant (p<0.05) (Table-2).

Over the years, light cure composites have attained better mechanical properties that permit their use in posterior teeth.18  The most important property for these composites is polymerisation throughout the increment, which is affected by DoC. The DoC depends on the light reaching the bulk of the composite. One of the many factors on which DoC depends is the curing mode and the unit used for polymerisation. The diversity in light curing units in literature is evident. A study concluded LED to be more intense than QTH in terms of curing.19  Yap et al. used halogen as the preferred method for polymerisation and found significant results.16 The most commonly used curing units were LEDs, including the present study. In order for the composites to polymerise, the recommended wavelength is 480-550nm and the intensity of curing light to be 900-1500mW/cm2.20  In the present study, the intensity was 1250mW/cm2 and the wavelength was 450nm. A recent systematic review concluded that bulkfill materials achieve acceptable DoC at 4mm when irradiance was >1000mW/cm2.21  However, this was in contrast to the current study where the maximum DoC achieved was 3.18±0.26mm using the ramped mode.

Obici et al.22  and Miljkovic et al.13  demonstrated that DoC was strongly influenced by polymerisation mode. This was in line with the current results. Obici et al recommended intermittent mode of light curing unit to give the highest DoC,22  while Miljkovic et al. showed that maximum DoC was achieved by the ramped mode.13  Monte et al. showed statistically significant difference that favoured constant and soft start modes.23  These findings, corroborated by the current study, revealed significant difference when SDR bulkfill was cured using different modes. However, the current study favoured constant and ramped modes, which was similar to Milkovic et al.13  The difference in results with Obici et al. and Monte et al. could also be attributed to variety of materials, as the current study used composite with modified resins compared to the conventional composite which was used by the other studies.13,22,23

There are several direct and indirect methods available to test DoC, like infrared spectroscopy and lasers which are considered direct measures, and visual inspection, micro-hardness and scraping tests that are rather indirect.27  Flury et al. concluded that ISO 4049 scraping test overestimated the DoC, but this method is a validated research tool tested over time for direct comparison of materials.28  A systematic review revealed that SDR bulkfill flow had a higher DoC when evaluated using various methods, including ISO 4049 scraping method, as evaluation tool.29  The ISO 4049 scraping method used in the present study allows immediate measurements of the DoC, thus minimises the potential for additional curing that could occur during sample preparation and data collection for other means of mechanical testing, including the hardness tests.30

The current study has its limitations as only one material was used with a smaller sample and while using one type of light curing unit. Further studies are needed using different materials and multiple combinations of polymerisation modes with a larger sample size. Mimicking the oral environment by thermos-cycling and hardness tests should be carried out for elaborative results as ISO can overestimate DoC.

There was a significant difference among constant, pulse and ramped curing modes. The maximum DoC in bulkfill composites was achieved in the group with ramped polymerisation mode, while the minimum DoC degree was noted with the pulse mode.