Method: The retrospective observational study was conducted in South Korea and comprised data from the Emergency Department-based Injury In-depth Surveillance Registry of all adults with pesticide poisoning from 2009 to 2017. The primary outcome was overall mortality. Adjusted odds ratios with 95% confidence intervals of the exposures on clinical outcomes were calculated. Data was analysed using SAS 9.4.

Conclusion: Intentional poisoning showed higher mortality rate and major adverse outcomes. It is important to consider host factors before poisoning, such as acute alcohol consumption, which may contribute to the clinical outcomes of pesticide poisoning cases.

Intentional poisoning is a major causative factor for the global suicide burden. It is estimated that this accounts for approximately one-third of the world's suicides, or approximately 260,000 deaths per year.3-5Previous studies have reported that intentional poisoning was the leading cause of mortality among pesticide poisoning-related deaths in South Korea.2 The World Health Organisation (WHO) now considers pesticides to be the most common method of suicide globally.6

Many countries have implemented strategies, such as cancellation of registration of fatal pesticides to prohibition of sale in the market and restricted production, to reduce the cases of intentional poisoning. These measures have been effective in the reduction of the number of pesticide suicides worldwide, but there are still high incidences of consumption and mortality.11-13In addition to these efforts, it is important to investigate the characteristics of patients in association with the incidence and prognosis of pesticide poisoning.

The retrospective observational study was conducted in South Korea and comprised data from the Emergency Department-based Injury In-depth Surveillance (EDIIS) registry of all adults with pesticide poisoning from 2009 to 2017. EDIIS is a nationwide clinical database of injured patients visiting the emergency departments (Eds) managed by the Korea Centres for Disease Control and Prevention (KCDC).14 The registry was founded in 2006 at 5 hospitals, and currently, a total of 23 EDs are geographically sampled by the KCDC, which collects injury-related data from patients for the establishment of a regional surveillance system based on each participating ED and to develop national strategies for injury prevention. All the participating EDs are located in tertiary hospitals.

The EDIIS database was made based on the core dataset of the International Classification of External Causes of Injury (ICECI) proposed by the WHO.15 The database collects demographics of injured patients, injury-related information, records of pre-hospital emergency medical services, diagnosis, clinical findings, treatment in the ED, disposition in the ED, and clinical outcomes of the patients.

In poisoning cases, the substances to which the patient was exposed is registered using pre-defined codes. The product names or prescriptions of the substance are also recorded. These substances are further categorised into pesticides, natural toxins, chemical toxins, therapeutic agents, gases and other or unknown substances. Pesticides are further classified into herbicides, insecticides, rodenticides, others and unknown. Only reliable quality data was used in the current study. The QMC team did duplication checking and looked for missing information.

Data included in the current study related to individuals of either gender aged >18 years who presented at any of the 23 EDs with pesticide poisoning. Pesticide poisoning was further categorised into herbicides, insecticides, rodenticides, others and unknown.

Baseline characteristics, like age, gender, period or season, information related to poisoning, like place of intoxication, acute alcohol use or transportation method, information about the vital signs at the time of arrival at the hospital, like systolic blood pressure (SBP), diastolic blood pressure (DBP) and heart rate, and other study outcomes were noted. Intentional cases were defined as self-injury or suicide in the record of injury intentions, and the cases including violence or extortion were defined as unintentional poisoning. Alcohol consumption by the patients was defined as positive if the patient's drinking record was positive, while negative alcohol cases were defined as cases without any evidence of alcohol drinking or when only the person involved in the injury, including the perpetrator, was drinking.

Data was analysed using SAS 9.4. Categorical variables were compared using chi-square test or fisher's exact test, as appropriate. Univariable and multivariable logistic regression analyses were performed to estimate the effect size of intentionality on study outcomes. Adjusted odds ratios (aOR) were calculated with 95% confidence intervals (CIs) of the exposure variables on study outcomes after adjusting for potential confounders. Multicollinearity between co-variables was tested. As it was a retrospective study, the sample size could not be calculated. However, the power of study was 100%.

Overall, 5,848(79.9%) cases were of intentional pesticide poisoning. Significant differences were observed with regard to the place of intoxication, transportation method, and alcohol consumption, and high mortality as well as higher incidence of MAEs were seen among the cases of intentional poisioning (Table-1). 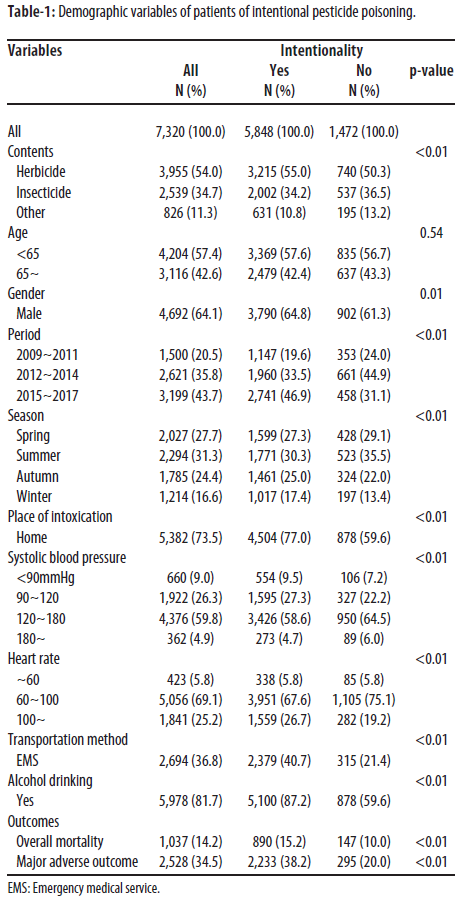 After adjusting for the other covariables in the interaction model, the aOR of the study outcomes differed across the intentionality according to the alcohol consumption (Table-3).

The mortality rate by pesticide poisoning was 14.2%, which was higher than that of other serious diseases, such as myocardial infarction.16

The relatively high mortality rate by pesticide poisoning in South Korea compared to other causes of death may be explained by the use of pesticides as a means of suicide.17 Nearly 80% pesticide poisonings reported in the current study were intentional, and these results are in contrast with reports from other countries where accidental drug poisoning was the main cause of hospital admission.18,19A similar pattern was observed in other low- and middle-income countries (MICs) in Asia, where over 80% of all pesticide poisoning patients were hospitalised due to intentional poisoning.7 Intentional poisoning showed significantly higher mortality rates than accidental poisoning in the current study, thus confirming the results reported earlier.20

By limiting the availability of toxic pesticides and reducing pesticide use in agriculture in general could result in less environmental and occupational exposure in rural areas. However, it is not clear whether this would also affect the high rates of pesticide self-poisoning. Occurrence of intentional poisoning is also determined by factors, such as the socioeconomic condition of the patient and the accessibility to pesticides. Among patient factors, age and gender are irreversible, but alcohol consumption before poisoning can be classified as a factor that can be changed, depending on the situation.21,22

Acute alcohol consumption is an important factor associated with self-poisoning.7,23Alcohol intake is associated with impaired judgment, poor impulse control, and, possibly, changed taste, increasing the likelihood of ingestion of large doses of pesticides.

Similar to previous reports, in the current study, alcohol consumption was found to be strongly correlated with intentional poisoning, at rates more than twice that of non-alcohol drinking cases.24,25

The current study has several limitations. It is a retrospective study and might have inconsiderable confounders that affected the exposures and outcomes, such as residence region or economic status. The study was based on a surveillance system that collects data from 23 EDs, which means the findings do not cover all pesticide poisoning patients in South Korea. Therefore, it is possible to over- or under-estimate the incidence and study outcomes of poisoning patients. The registry is based on patient statements, and since South Korea does not guarantee national insurance for self-harm, one cannot be honest about reported intentionality. Although the EDIIS registry had a number of pesticide poisoning cases, information was not provided as a mandatory variable but in a limited manner. Information on drug types and amount was hardly available, and therefore it was not included in the current study. Lastly, the study could not adjust for unmeasured bias.

Source of Funding: This study was supported by a grant (BCRI 19018) Chonnam National University Hospital Institute for Biomedical Science

15.    Kozlowski KF, Leddy JJ, Tomita M, Bergen A, Willer BS. Use of the ICECI and ICD-10 E-Coding structures to evaluate causes of head injury and concussion from sport and recreation participation in a school population. NeuroRehabilitation. 2007; 22:191-8.

17.    Cha ES, Khang YH, Lee WJ. Mortality from and incidence of pesticide poisoning in South Korea: findings from National Death and Health Utilization Data between 2006 and 2010.