Methods: A prospective review of patients was done with fracture non-union admitted to Aga Khan University Hospital, Karachi, from January 2016 to January 2019. The patients were divided into two groups; those exposed to Bone Morphogenetic Protein-2 alone in group 1, and those exposed to Bone Morphogenetic Protein-2 plus autologous graft in group 2.

Conclusion: Results showed that using the adjuvant treatment alone was not worse than using it along with bone autologous graft.

Long bone fractures are a frequent problem with which patients present in hospitals.1 This is due to a number of factors, including high rate of road traffic accidents (RTAs) as well as the increasing prevalence of osteoporosis in elderly patients.2 However, there is a lack of epidemiological evidence and demographics on fractures in Pakistan.2 In each fracture, the risk of developing non-union depends upon an individual risk profile, and, hence, varies from person to person.3 However, is also repeated above according to current research, there is an approximate 5-10% risk for any individual to develop non-union of a bone despite conservative or operational intervention.3 Non-union of bone is defined as the inability of a fracture to heal without any further intervention, irrespective of the treatment time. According to research, the intervention required in the treatment of non-union of bones is highly dependent upon the time since non-union. In the early stages, intervention can simply be conservative.4 In later stages, operative treatment is the modality preferred to treat non-union.

Treating non-unions with such procedures depends upon the type of non-union and the presence of any infection. Fixation of these fractures is based upon a “diamond concept” which simply means working on improving the current mechanical support given to the fracture.5 This can be done through various surgical interventions. Among the various operative treatments, including the use of auto as well as allografts for healing of non-unions, one of the options is the use of Bone Morphogenetic Proteins (BMP-2 or BMP-7). These proteins are part of the transforming growth factor beta (TGF-β) superfamily and are involved in bone and cartilage formation and repair during embryogenesis and later in life.6

Current literature regarding the use of BMP in treating non-union of bone has shown that they are effective in promoting the healing of these fractures and decreasing the union time.7-16A study conducted in the United Kingdom followed 42 patients with upper limb non-union fractures for a minimum period of 12 months until fracture union. Out of the 42 patients, 35 had atrophic non-union, 11 had previous open fractures, and 10 had bone loss (range 1-3 cm). The mean time between the application of BMP-7 and the initial injury was 26 months. At the end of their study, 40 out of 42 patients had both clinical and radiological union, while 2 patients had partial radiological union with a pain-free range of motion (ROM). Overall, only one case had BMP-7 applied solely, the rest had a combination of BMP-7 and autologous bone grafting.9

Comparisons between the use of autografts and BMP use showed that BMP was a useful alternative to the usage of autografts by helping to avoid the side effects associated with the use of autografts, such as donor site morbidity and having limited biological activity. Furthermore, the economic cost of using BMP is outweighed by the benefits it provides.17

BMP-2 has also been evaluated for its role in orthopaedic trauma surgery, with the study showing that there was a significant decrease in the need for secondary autograft procedures for the treatment of these non-union fractures after using BMP-2. The role was tested in the BMP-2 Evaluation in Surgery for Tibial Trauma (BESTT) study which included 450 patients with acute, diaphyseal and open tibial fractures, and showed a significant decrease in the risk for secondary intervention.18

However, despite the research already available on BMP and its effectiveness, it is still a recent modality of treatment in Pakistan, with the United Kingdom having started using BMP in 2001 only, and, hence, it still requires more data to study its overall effectiveness and the rate of complication in its usage.19

Furthermore, there is very little data on the use of BMP in Pakistan and how effective this treatment has been in the local population. The current study was planned to look at the effectiveness of BMP-2 in treating non-union fractures of long bones in a tertiary care setting.

The clinical audit was conducted at the Aga Khan University Hospital (AKUH), Karachi, from January 2016 till January 2019. AKUH is a tertiary care health facility. After approval from the institutional ethics review committee, all patients who had undergone treatment with BMP-2 for non-union of long bone fractures at the hospital and who were aged >18 years was included. Those who refused to participate and those who had pathological fractures or active infections were excluded.

Each group was followed in clinic at their 6th. 12th and 24th-week postoperative visits and the subjects were assessed clinically and radiologically for union of the fracture. At each visit, the patients were seen for clinical union by examining the operated site for tenderness, stress angulation and ROM. Any limitations in daily activities were noted, along with any postoperative complications.

Radiographic union was defined as bridging bone on a minimum of three cortices on conventional anterior-posterior (AP) and lateral radiographs. This was assessed after 6, 12 and 24 weeks postoperatively by a senior orthopaedic resident not part of the primary surgical team along with input from the primary operating team regarding radiological union.

Clinical union11 was defined as painless weight-bearing, absence of difficulty in activities of daily living (ADLs) and lack of local tenderness over the non-union site on physical examination, which included ROM at the appropriate joint and gentle stress angulation at the fracture site.

Data was analysed using STATA 14. Normality of variables was assessed through Histogram and the Shapiro-Wilk test. Mean and standard deviation was used to express variables that were normally distributed, while median and interquartile range (IQR) was used for variables that were not normally distributed. Frequencies and percentages were used for qualitative variables. Patient demographics and fracture characteristics were analysed in both cohorts with chi-square/Fisher Exact and t-test, as appropriate. Associations between the variables were examined with Cox proportional algorithm for risk ratio (RR) and adjusted risk ratio (ARR). Univariate analysis was done for all variables having p<0.25. Multivariate analysis was done for significant variables using main effect model with p<0.05 taken as significant. Data was analysed for confounding variables. 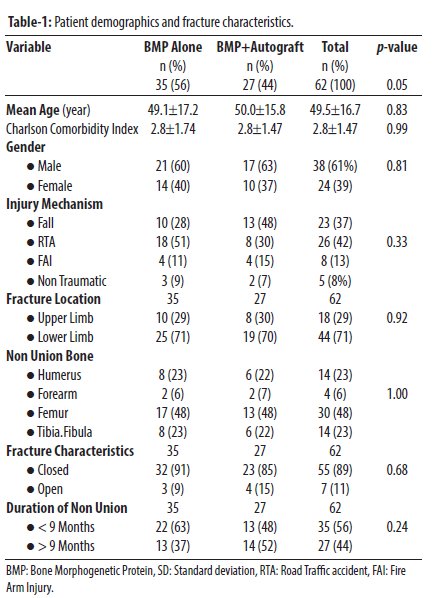 There was a significant difference observed (p=0.049) in the types of procedures performed for non-union, with 38(61%) having had open reduction and internal fixation (ORIF), followed by nailing 16(26%) and Ilizarov 8(13%).

Non union of bone is a fracture that, in the opinion of the treating physician, has no possibility of healing without further intervention. About 5-10% of fractures will ultimately end up in non-union.3 Numerous risk factors can contribute to non-union, including local, systemic and mechanical factors.20 Patients can present with pain, disability and deformity and are usually diagnosed clinically and with plain radiographs. Non-union can be a devastating complication of long bone fracture. It can take several years for the treatment to be successful and it may result in amputation and permanent disability. Non-unions can be treated with a variety of procedures, including ORIF, nailing and Ilizarov. A variety of modalities are available to provide biological stimulus for fracture-healing bone-grafting, which remains the gold standard because of its osteogenic, osteoinductive and osteoconductive properties.21

With the recent introduction of BMP in the treatment of non-union, a new horizon has opened up. There are more than 30 different forms of BMP, but only a few have osteogenic properties.22 The main forms in commercial use are BMP-2 and BMP-7, but there is little consensus on the best type of BMP to use for non-unions.23 Only a few studies have shown the beneficial effects of combining the BMP with bone graft. According to one study,24 BMP-2 was superior to BMP-7 in treating tibial non-unions, implying that BMP types may have different effects on different regional non-unions. However, based on literature review,24 we suggest that BMP-2 can be utilised irrespective of the non-union region. Various animal studies have shown the benefit of using BMP alone for bridging massive bone defects, but these effects are yet to be studied in humans25 and that is why BMP is combined with autograft for large defects that are treated at AKUH Figure. In our audit we reviewed two groups: BMP alone and BMP+Autograft and their outcomes were studied. Both groups, to start with, were similar in regards to demographics and fracture characteristics. No significant difference observed in union rates between the two groups. Fracture configuration, severity and procedure technique can influence modality choice but a larger study is required to study the effects of different modalities that are applied. There was a significant decrease in the need for secondary autograft procedures for the treatment of these non-union fractures after using BMP-2. BMP could be utilized in non unions without major bone loss providing similar union rates to bone grafting, and so patient selection remains important for deciding when it should be used. 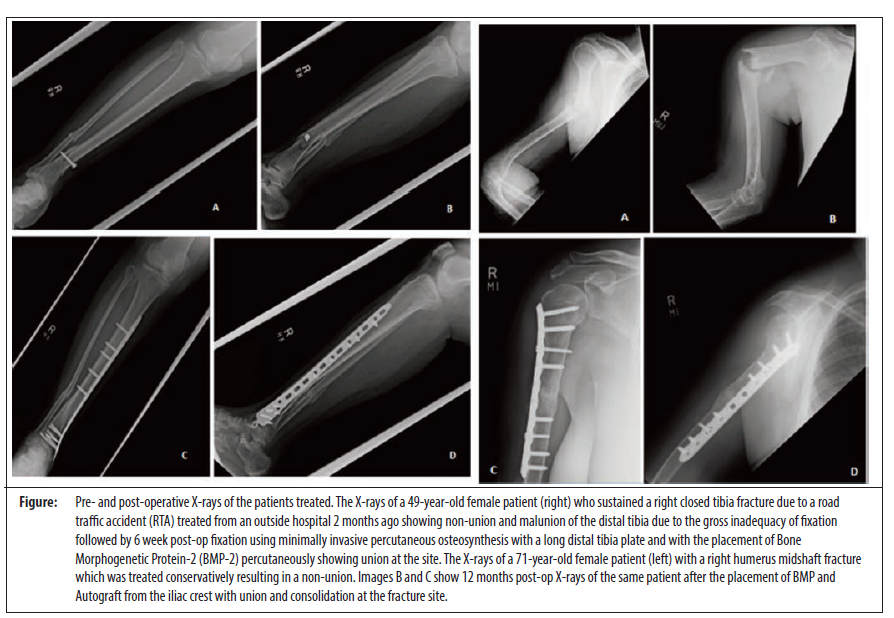 The main strength of the current study is its prospective design which reduces selection or information bias. In terms of limitations, the sample size of the current study was relatively small to derive strong associations. Patients who had bone graft alone without the use of BMP were not included at the start of the study. Most of the patients included, if not all, were admitted for surgery, and, hence, patients who were managed non-operatively could not be included. Further research, including randomised clinical trials (RCTs), should be conducted to study the differences between different modalities and to establish firm guidelines.

Autologous iliac crest bone graft remains the gold standard. Recombinant human BMP-2 (rhBMP-2) was found to be a suitable alternative which can be used alone without the autograft in suitable patients and fracture configurations. It offers similar union rates to bone grafting, thus avoiding donor-site morbidity in cases where structural support is not required.