Crisscross heart (CCH) is a rare anomaly characterized by twisting of the inflow streams of right and left ventricles. The etiology of CCH is not known. Its frequency is less than 8/10, 00,000 live births. Cyanosis is common in neonatal age, while shortness of breath is the main presenting complaint in older children. We present a case series of CCH with array of associations, diagnosed by echocardiography.

CCH is a rare heart defect that can be diagnosed by echocardiography by a vigilant operator. Early diagnosis is the key to successful management resulting in increased survival rate, better outcomes and improved quality of life.

The basic defect in CCH is the crossing of inflow streams of two ventricles. The presentation depends on associated conditions like transposed great arteries, coarctation, ventricular septal defect and rhythm abnormalities. Its frequency is less than 8/10, 00,000 live births.1 Until 2015, a total no of 150 cases have been reported worldwide.2

In CCH, the ventricles have a superior-inferior relation that appear to result from abnormally rightward or leftward rotation of ventricular mass of the developing heart causing crossed atrioventricular (AV) connection.3 The ventricle connects with the contralateral atrium and is arranged in a superoinferior manner. The left ventricle (LV) located inferiorly and the right ventricle (RV) superiorly.3 The main diagnostic tools are 2-dimensional and colour Doppler echocardiography.4 Due to the complexity and rarity of the anomaly, this condition is often missed. Here, we report a case series of CCH which were diagnosed by echocardiography. These cases were seen in Rawalpindi institute of Cardiology, Rawalpindi.

A 14-month-old male baby, weighing 3.8 kg, presented in July 2019 with cyanosis, shortness of breath and feeding difficulties. Physical examination revealed pallor, cyanosis and respiratory distress. He was having tachypnoea and tachycardia while blood pressure was normal. His oxygen saturation was 80% in room air. On auscultation, first and second heart sounds were normal with a pansystolic murmur at the apex.

Chest roentgenogram revealed cardiomegaly with increased pulmonary perfusion. Echocardiography showed that right atrium was connected to the left ventricle through mitral valve and the left atrium to the right ventricle through tricuspid valve (Figure-1). 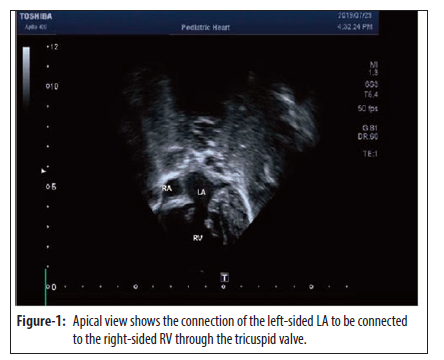 Both great arteries were arising from left ventricle and were d transposed (Figure-2). 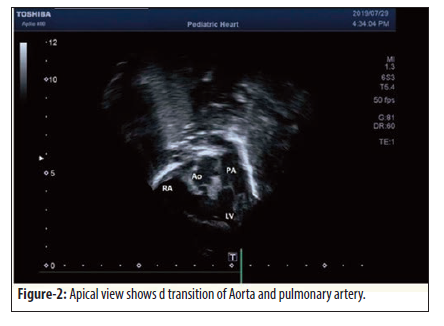 There were multiple ventricular septal defects along with severe mitral regurgitation.

Baby was already late for surgical correction as discussed in multidisciplinary team meeting. He is currently on diuretics and pulmonary vasodilators.

A 40-day old male baby, weighing 3.2 kg presented in November 2019 with cyanosis and feeding difficulty. On examination the baby was pale, cyanosed and breathless. He was having tachypnoea and tachycardia. Blood pressure was on upper normal limits in upper limbs. Oxygen saturation was 88% in room air. His pulses were weak in lower limbs. On auscultation, there was a pan systolic murmur at the left parasternal area. 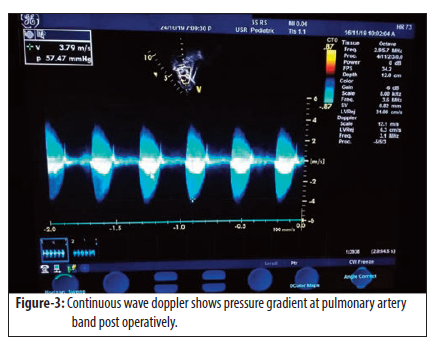 A 37-year-old female, weighing 50 kg presented in January 2020 with exertion dyspnoea, palpitation and cyanosis. Physical examination revealed that she was having tachypnoea and tachycardia with mild cyanosis. Her blood pressure was normal while oxygen saturation was 85% in room air. Peripheral pulses were equal. On auscultation there was a diastolic murmur at apical area.

Multidisciplinary team discussion concluded that the patient was late for surgical correction. She is currently on medical treatment.

CCH is a complex congenital anomaly that results from the rotation of ventricular mass along its major axis. Lev and Rowlatt, in 1961, mark out unusual position of ventricular chambers in a superoinferior fashion.4 The terminology of CCH was initially used by Anderson in 1974 where the systemic and pulmonary venous streams cross at the AV level.3 In literature review, cases are reported not only in antenatal and postnatal period but also in older age.5 Our case series includes patients belonging to both extremes of age. Most of the cases reported worldwide are idiopathic; however, some studies have shown association of CCH with connexin 43 gene mutation.

The clinical presentation is arbitrated by the atrioventricular and Ventriculoarterial relation and the adjuvant heart defects.6 There are three forms of CCH; normal heart, Dextro (d) and Levo (l) transposition. In this series, there was transposition in two cases while one case had normal concordance. Most patients with CCH have VSDs as in our case series, though cases with intact interventricular septum have also been reported.4,7Both the great arteries arise from a single ventricle in two of our cases as shown by Ren case report too.8 Ravi demonstrated associations of coarctation of aorta with criss cross heart, a finding that is also present in one of our cases.9 Straddling of mitral valve is an important association with CCH as demonstrated by many investigators.1-3One of our patients showed straddling of mitral valve with severe regurgitation.

The diagnosis should be suspected when one fails to obtain a characteristic 4 chamber view in any plane with transthoracic echocardiography. Yang described the same characteristic feature of CCH.10 Colour flow mapping can be helpful in assessment of the AV relation and twisting of inflow streams of ventricles. Although transthoracic echocardiography is the favoured modality, however, magnetic resonance angiography may contribute relevant clues like large field of view and Multiplan image.11

CCH is a rare heart defect that can be diagnosed by echocardiography by a vigilant operator. Early diagnosis is the key to successful management resulting in increased survival rate, better outcomes and improved quality of life. Delay in treatment, as seen in our two cases, results in worst outcome and increases the burden on health system in the long term.

Conflict of Interest: Dr. Abdul Malik Sheikh, HOD, Department of Paediatric Cardiology at Rawalpindi Institute of Cardiology has signed the Letter of Approval for this Case Series. He is also a co-author of the same manuscript.