Method: The cross-sectional study was conducted in 2018 at the Helping Hand Institute of Rehabilitation Sciences, Mansehra, Pakistan, and comprised mothers of cerebral palsy children aged 1-18 years from the Hazara Division. Data was collected by using a modified form of Surveillance of cerebral palsy in Europe questionnaire regarding prenatal, natal and postal natal risk factors. Data was analysed using SPSS 21.

Conclusion: Anaemia and delayed crying were the major risk factors identified in mothers and children, respectively, in the study sample.

The disorder is associated with a huge economic cost. The US spends  $1 million per CP child in a lifetime for social services, educational and health needs.8 Similar cost is observed across the developed world.9  Effective interventions have been used in Australia since 1990, with reported efficacy in lowering CP incidence.10  As a result, the prevention of CP is seen to avert high economic cost.11  To reduce the incidence of CP, the priority of risk factors needs to be determined. The common risk factors in Karachi have been reported to be birth asphyxia, kernicterus, meningoencephalitis, consanguinity, infections during pregnancy and home delivery.12-15 In this connection, anaemia, hypertension (HTN), urinary tract infection (UTI) and prenatal haemorrhage are the major risks factors associated with the worst outcome.16  Among these factors, anaemia appears to be the leading cause of adverse outcomes, including premature births and LBW.17

Rapture of the uterine wall, placental abruption, and acute delivery due to non-reassuring foetal status, caesarean sections (CS), cousin marriages and delayed crying are conditions that are reported with strong risk association with CP.15  A similar relation of CP is also reported with gestational age; 2/3rd babies with CP in which 96% singletons born after or at 35 weeks of gestation and 1/4th prevalence in full-term babies. Other rare risk factors associated with CP include perinatal stroke25  and placental vascular pathology.26

To our knowledge, there is a scarcity of research on this subject in Pakistan. The current study was planned to evaluate the prevalence of risk factors of CP in the mothers of children with CP.

This cross sectional study was conducted in 2018 at the Helping Hand Institute of Rehabilitation Sciences (HHIRS), Mansehra, Pakistan, which had registered around 2,500 CP subjects using one or more of its rehabilitation services till 2018. A sample size of 300 mothers of CP children was ascertained from the HHIRS’ record from 2017 to 2018. The western estimates of CP birth occurrences range from 0.21-0.24 percent, which is three times lesser than the eastern estimates. A 10% sample size yields a sample of 300 moms with CP children.5  Those included were mothers of CP children aged 1-18 years who had availed any of the physiotherapy, occupational therapy, speech and language pathology, or prosthetic and orthotic department services.  Parents who refused to give consent, children with deceased mother, age <1 year and >18 years, children with diagnosis other than CP were excluded. Informed consent from the mothers was obtained.

Children aged <1 year were not included because in these children, milestones are not fully developed. A panel of experts agreed on the questions in the local language that were designed for the interviewers who were final year students of the doctor of physical therapy programmer.

Data was analysed using SPSS 21. Descriptive statics were expressed as frequencies and percentages. Data was split in relation to various variable and isolated comparisons were determined. 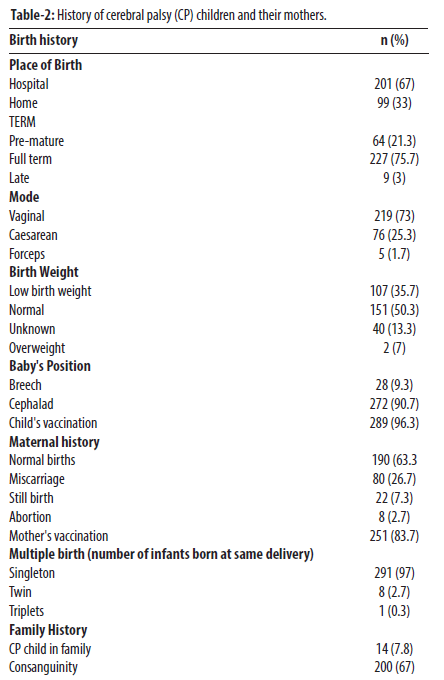 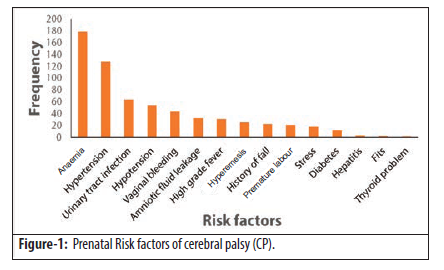 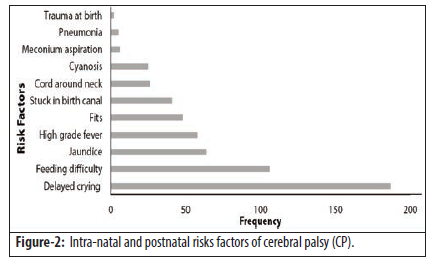 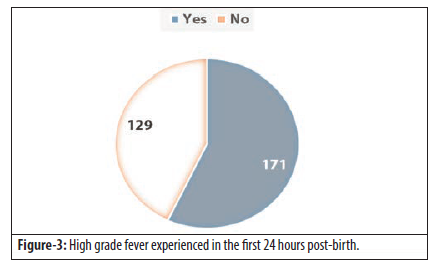 Childbirth history was compared between those that took place in hospitals and homebased deliveries. Delayed crying was mentioned by 123(61.2%) mothers in the former group compared to 64(64.6%) in the latter group (Table 3). 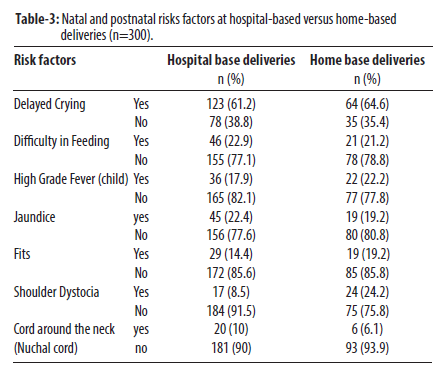 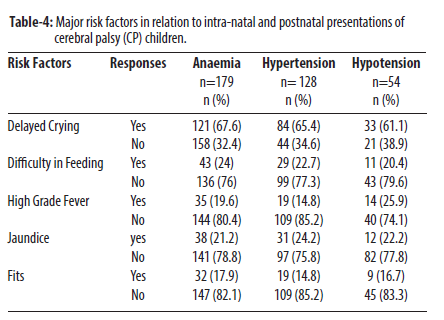 The current study aimed at evaluating the risk factors of CP and its demographics. Anaemia, HTN, and hypotension were found more prevalent prenatal risk factors in mothers of CP children at the time of their pregnancies. It has been previously reported that anaemia is prevalent up to 75% among pregnant women at Faisalabad27  in the general population. The adverse outcomes in association with anaemia in the third trimester are reported and predicted.28

Male children with CP were more (63.3%) than female (36.75) in the current study which is consistent with earlier Australian and Japanese studies.29,30 Similar results of gender-based prevalence in Pakistan has also been reported.31  Males are more prone to CP than females, suggesting a relationship with Y chromosomes that are more sensitive to mutations than the X chromosomes.32

Mothers aged 40 years and above are at a higher risk factor for CP.33  The mean of age of mothers in the current study, in contrast, was 26.16±5.11 years, with only 5 mothers aged >40 years. Since anaemia was a common factor and the mothers in the sample were from poor socioeconomic class, therefore, mothers’ age may not have been of significance.

Among the prenatal determinants in the current study, anaemia was more prevalent (59.75%). The high prevalence of anaemia during pregnancy is quite common in the general population in Pakistan28 and our findings are similar to the findings of Minocha et al. who reported the major risk factors as anaemia, maternal infections, HTN and antenatal haemorrhage.17,34 The prenatal risk factors probably lead to natal and postnatal complications and adverse outcomes, including damage to the neonatal brain.17,28 Further analysis in relation to the prenatal risk factors (Table 4) revealed a higher percentage of delayed crying, kernicterus, difficulty in feeding, and fits which indicate an association and higher risk. Similar factors are identified previously in the local population.14,15

Vaginal bleeding was the 4th highest factor in the current study (14.3%) among the antenatal hazards (14.3%). Mothers in the 2nd and 3rd trimesters are reported with higher risks if they were anaemic and that increased the likelihood of preterm deliveries with LBW.28

The majority (67%) of the births took place in hospitals and 61.2% of the mothers reported delayed crying of the child at the time of birth. Meconium aspiration, prenatal risk factors, breech presentation, shoulder dystocia and preeclampsia could be the possible reason, but the number was sufficiently high and future studies should investigate the factors that lead to such a high proportion of delayed crying.

Consanguinity in mothers was 66% which is relatively high and may be a possible risk factor in the Hazara division. A complex genetic inheritance or multifactorial inheritance of CP has been proposed35 and seems to be true in relation to the current study since cousin marriages were in high proportion.

One of the major limitations of the current study is the recall bias since the questions were asked about their pregnancy experience of 1-18 years ago. However, motherhood experience is unique and most of the experiences during the pregnancies are not forgettable, and, therefore, the information gathered from the mothers may be close to reality without prejudice. Also, the CP children were grouped according to age and age group 1-5 years was the largest, meaning that for mothers the experience was not too old. The second limitation was the absence of Appearance-Pulse-Grimace-Activity-Respiration (APGAR) score. Ideally, much of the information regarding the postnatal complication could have been extracted from these scores. Records of the birth history were found to be poorly documented and, therefore, could not be accessed for the selective age group of patients in the local hospitals. Thirdly, mothers of children with CP enrolled at HHIRS belonged to the poor socioeconomics class (30%) since the institute offer incentivised treatment for their children. Therefore, the sample may not be truly representative of the community. The strength of the study is its large sample size.

Further studies should focus on the case-control design for risk association of factors identified in the current study. Stress has been the vital risk factor reported, but a firm conclusion can be reached since it was reported by 18 mothers and without much understanding of the concept of stress.

Anaemia, HTN, UTI and vaginal bleeding were the major prenatal risk factors. The most common postnatal risk factors of CP were birth asphyxia, jaundice and high-grade fever. Majority of the CP children had vaginal delivery mode. Consanguinity was prevalent in the mothers of CP children.

Conflict of interest: The person who signed the IRB letter is also co-author of the study.

36.    Gladstone M. A review of the incidence and prevalence, types and aetiology of childhood cerebral palsy in resource-poor settings. Ann Trop Paediatr 2010; 30: 181-96.