High-grade Intraventricular tumours are rarely encountered. Many of these tumours will have similar patterns on imaging of signal intensity and contrast enhancement. As IVT are regularly not targetable by radiation or systemic therapy, until now, surgical resection presents the treatment of choice.

Intraventricular tumours (IVT) are a heterogenous group of neoplastic lesions, and account for only 2-7% of all intracranial tumors.1 They can arise from walls of the ventricle, the septum pellucidum, or the choroid plexus.1  The most common location (50%) is the lateral ventricle. High-grade supratentorial IVT are rare and commonly include anaplastic ependymoma and choroid plexus carcinoma.2  Less common lesions include primary central nervous system lymphoma, glioblastoma, gliosarcoma and lymphoma.2  Correct diagnosis of IVT poses a challenge due to overlapping symptoms of raised intracranial pressure and a wide variety of radiological features that may not be truly pathogonomic. Headache, vomiting and seizures are the common presenting complains as most of these patients present with hydrocephalus.2  This article reviews the epidemiology, the pathologic characteristics, and the primary treatment plan for each of these tumours.

We reviewed the relevant literature on Google Scholar and PubMed, for the epidemiology, the pathologic characteristics, and the primary treatment plan for each of these tumours. High-grade IVT are rare, therefore most studies were case reports or relatively small case series.

Ependymoma is a well-circumscribed glial tumour, and arises from the ependymal lining of the ventricles and cerebral hemispheres, and the spinal cord’s central canal. It presents as a heterogeneous mass with some areas of necrosis, calcification, cystic changes, and haemorrhage. The World Health Organization (WHO) has classified it into grade I, II and III (anaplastic).3  They account for 3–5% of adult intracranial neoplasms and the most common location (60%) is the fourth ventricle.3  Ependymomas do not have any gender predilection and most patients present with signs and symptoms of raised intracranial pressure (headache, nausea/vomiting, blurred vision).3  Supratentorial ependymoma are more likely to be anaplastic than other locations.4  Hence, this gives it a heterogeneous appearance on all imaging. 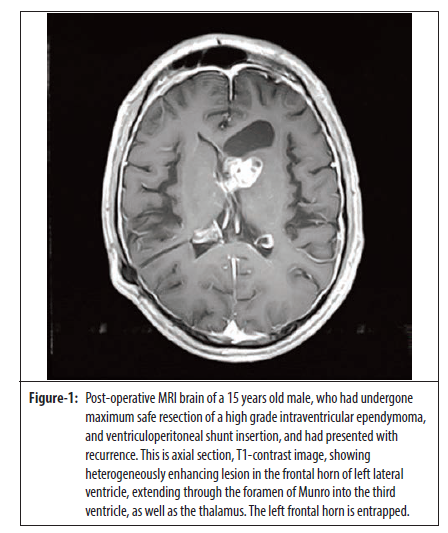 On CT scan ependymoma can be seen as a solid mass (iso-dense or hypodense) with cystic areas (50%) or coarse calcification (50%); heterogeneous enhancement can also be seen along with variable haemorrhage. On T1-weighted images, solid portions of ependymoma are usually isointense to hypointense relative to white matter, while they appear hyperintense on T2-weighted images. The traditional tumour classification systems relied solely on the histopathological features. However, there was wide degree of heterogenity in clinical presentation and patient outcomes. It was later discovered that tumours with same histology can exhibit different molecular features which are linked to prognosis. Supratentorial ependymoma can be classified into 3 molecular subgroups, namely SE, EPN-YAP1 and EPN-RELA. Only SE molecular subgroup occurs in adults and has good outcomes.5 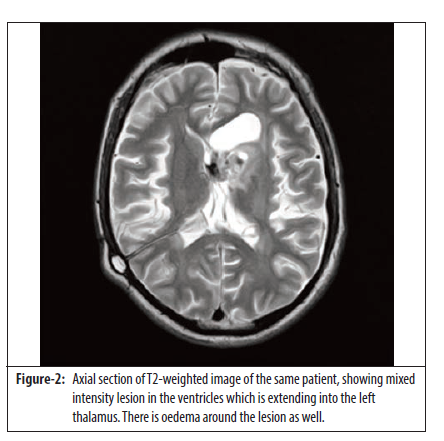 Recently, the role of liquid biopsy for diagnosis of ependymoma has been the topic of research for detecting tumour genetic material in blood or CSF. While plasma samples did not yield promising findings, CSF samples yielded significant results. Wang et al. conducted a cross-sectional study to review CFS samples of 35 patients with intraventricular tumours.6  Eight of these were supratentorial, and 6 cases were ependymoma.6  All the ependymoma were detectable in CSF samples (p < 0.001).6  Supratentorial ependymoma are usually amenable to gross total resection (GTR). Extent of resection, age of the patient and histologic grade are associated with outcomes. Metellus et al. conducted a retrospective cohort study of 46 patients with ependymoma, and reported the 5-year progression free survival (PFS) of 33.8%±8.1% and 10-year PFS of 25.4 ± 8%.7  They concluded that extent of tumour resection, age of the patient and histological grade were the major prognostic factors in adults.7 Currently, the treatment of choice involves maximal safe resection and, in cases of residual disease, adjuvant radiotherapy.

Choroid plexus carcinoma (CPC) are a type of malignant neoplasm which arise from the epithelium of the choroid plexus. They are typically soft and may have a calculous texture due to calcification with invasion into the periventricular brain parenchyma.8  Bahar et al. studied one of the largest retrospective cohort study on choroid plexus tumours, including 30 cases of which 8 were adults.9  Only 7 patients had a CPC, most of them children, and the median event free survival was 4.4 years.9  They concluded that the lateral ventricle is the most common location of these tumours, and about 90% of the patients presented in the clinic with signs and symptoms of raised intracranial pressure.9  They are classified as a WHO grade III tumour, and in adults, they account for less than 1% of primary intracranial neoplasms.8  They are rare tumours and their overall annual incidence is reported to be 0.3 cases per million and is equal in males and females.8  CPC on a non-contrast CT are typically heterogeneous and isodense to hyperdense when compared to grey matter. Haemorrhage and necrosis are commonly seen and approximately 20-25%  present with calcification. On T1 MRI isointense to hypointense whereas in T2 isointense to hypointense with hyperintense necrotic areas. Choroid plexus papillomas (CPP) are benign IVT and their presentation is similar to CPC. One way of differentiating between these tumours is immunohistochemical staining. While both CPP and CPC are positive for cytokeratins, CPC has only minimal expressions of GFAP, transthyretin, and S-100.10 The first line of treatment for these tumours is maximum safe resection along with chemotherapy and/or local radiotherapy, in cases of subtotal resection craniospinal irradiation may be useful.4  Carlotti et al. found that significantly higher MIB-1 level was directly related with, and that expression of MIB-1, p53, pRB, and E2F-1 was significantly lower in patients after chemotherapy.11

Glioblastoma is a highly aggressive brain tumour, accounting for approximately 12-15% of all intracranial neoplasms with a peak incidence at 65-75 years.12  These tumours have a predilection for the male gender (3:2 male to female ratio) and the intraventricular variants mostly occur in the frontal horn or body of the lateral ventricle.13  Histopathologically it consists of necrotic tissue and vasogenic oedema, resulting in being classified as a Grade IV tumor by WHO.8 They typically have poor margins and infiltrating necrotic masses localized to the cerebral hemispheres, commonly occurring at the supratentorial white matter. On the CT, the tumour has irregular thick margins, hypodense center representing necrosis, surrounding vasogenic oedema along with irregular, heterogeneous enhancement of the margins.12  On T1 MRI hypo to isointense mass within the white matter is seen.12  Stereotactic biopsy and tumour debulking is performed along with postoperative radiotherapy and chemotherapy with Temozolomide.4  Lately, antiangiogenesis (e.g. bevacizumab) and immunotherapy are also being used.4

Nsir A et al. studied 8 patients with histologically confirmed intraventricular glioblastoma.14  The mean patient age at the time of diagnosis was 29.6 years and the male to female ratio was 5:3. Majority of patients presented with symptoms of raised intracranial pressure. Six tumours were located within the lateral ventricle and the remaining two tumours were located in the anterior third ventricle. Gross total tumour excision was achieved in 3 patients, whereas subtotal surgical resection was done in 4 cases and a surgical biopsy was performed in 1 patient. Postoperative 5 patients received adjuvant therapies. The median survival time was 32.1 months, and 3 patients were alive at the end of the study. All of them had isocitrate dehydrogenase−mutated tumours.14  Gliosarcoma is a rare grade IV intracranial lesion, and it is often classified as a ariant of glioblastoma with worse outcome.15  They are usually categorized as IDH-wild type, however, some cases of IDH-mutant variants have also been reported.15  Monteiro de Macedo Filho et al. recently reported a case of IDH-mutant Gliosarcoma, diagnosed in a 44-year old male.16  The patient had a large intraventricular contrast enhancing lesion which was crossing midline through the corpus callosum, and was present in the trigone of the ventricles bilaterally.16  They performed maximum safe resection of the lesion, followed by adjuvant chemotherapy and radiotherapy. However, there was disease progression within a month of initiation of adjuvant treatment.16

Primary central nervous system lymphoma (PCNSL) is a rare subtype of non-Hodgkin lymphoma, with ~90% of the cases being of diffuse large B cell lymphomas, accounting for approximately 2% of all primary central nervous system tumours with a median age of 65 years at diagnosis.17 The high nuclear to the cytoplasmic ratio in PCNSL, makes the tumour look hyperdense on CT.17  PCNSL typically lacks haemorrhage and calcification. On T1 MRI PCNSL is usually isointense to hypointense whereas it is iso-hypointense to grey matter on T2.17  The treatment of choice is biopsy followed by chemotherapy with a high dosage of Methotrexate.17

The available evidence suggests that high grade IVT are very rare and patient age, gender and radiological scans can narrow down the differentials. The mainstay treatment includes tumour resection and in cases of residual disease, adjuvant radiotherapy for ependymoma, and both chemotherapy and radiotherapy for most other histological subtypes.