A rare double-delta sign in a bucket handle tear of lateral meniscus: A case report

The two most common causes of a meniscus tear are trauma and degenerative processes. Meniscus tears clinically present with pain, swelling and limited mobility of the knee joint. Bucket handle tear (BHT) is a full-thickness tear of the meniscus usually involving the inner portion of the medial meniscus. It is three times more likely to occur in the medial meniscus than in the lateral meniscus. Various signs such as the double anterior cruciate ligament (ACL) sign, double posterior cruciate ligament (PCL) sign, and triple PCL sign have helped radiologists diagnose this tear on magnetic resonance imaging (MRI). This case report is about a BHT of the less commonly involved lateral meniscus identified with a double-delta sign on MRI which has rarely been reported. A comparison of various radiological signs reported in the literature has been made, which will aid radiologists in diagnosis and have importance for the medical literature.

Injury of the fibrocartilaginous menisci of the knee results in meniscal tears. Meniscus tears overall constitute a common knee pathology resulting in knee pain with a mean annual incidence reported around 66 per 100,00 population.1 Tibiofemoral load transmission, shock absorption, and lubrication of the knee joint are the primary functions of the menisci.2

Meniscal tears are not only an important cause of disability and time lost from work but are also associated with a four-fold increase in the long-term risk of knee osteoarthritis. Playing soccer and rugby were evidenced as strong risk factors for acute meniscus tears.3 According to Cooper’s classification of meniscus tears, Bucket Handle Tears (BHT) are considered a separate type of meniscus tears.4

A BHT of a meniscus is a longitudinal tear with an attached fragment displaced away from the meniscus.5BHT is considered a sub type of longitudinal meniscus tear in which the inner part is centrally displaced. It often causes intermittent locking of the affected knee as the displaced fragment flips into the intercondylar notch.6 These tears are reported to occur either in young athletes as a consequence of  sports injuries or in an older group of patients as a result of degenerative changes in the body.2 The rise in these cases has been attributed to increased undertaking of sports as recreational activities.7 Specifically, medial meniscus BHT has a higher occurrence rate in the younger patient population due to acute trauma.8 Moreover, there is evidence in the literature that BHT occurs at a greater frequency in the medial meniscus than in the lateral meniscus.9Reportedly, one-third of meniscal tears are also associated with anterior cruciate ligament (ACL) injury.2

Magnetic Resonance Imaging (MRI) is the preferred modality to diagnose meniscus pathologies, especially tears. Its preference is owing to its higher imaging accuracy, structure visibility, and non-invasiveness as stated by De Smet.10 The essential characteristics of meniscal tears, such as location, shape, length, and depth can be revealed by MRI scans. Although MRI is the most important imaging modality for meniscus tears, arthroscopy is the gold-standard for the diagnosis of meniscal tears.2 This unique case of displaced lateral meniscal BHT is a significant contribution to the scientific literature because it presents as an isolated double-delta sign on a sagittal view that to our knowledge has rarely been reported in the scientific literature. Here, we will further review literature for similar cases and discuss various signs and presentations for BHT.

A 23-year-old male patient presented to Capital Hospital (CDA), Islamabad on 21st March 2021, with a history of pain in his right knee for the past one month. The pain occurred on external rotation of the knee, was sudden in onset, and resulted from a twisting injury incurred while practicing boxing at home. He was not only a professional athlete, neither did he have any previous co-existing medical conditions. Moreover, he had not undergone any surgical procedure in the past. His family history was unremarkable and he was not on any medications. On general physical examination, there were no signs of obvious distress and his vital signs were within normal range. On further examination, his right knee was slightly swollen and there was pain on external rotation of the knee. His movement was restricted which resulted in his knee locking and inability in moving.

A plain radiograph of the right knee was unremarkable. However, on MRI of the right knee, a double-delta sign was seen on sagittal images suggesting lateral meniscus BHT. A flipped low-signal fragment was seen on the anterior aspect of the lateral meniscus extending to the anterior intercondylar notch, measuring 19mm transverse (TR) x 12mm antero-posterior (AP), as shown in Figure-1.High signal areas in Hoffa's fat pad indicated co-existing hoffitis and moderate knee joint effusion extending to the supra patellar compartment as shown in Figure-2. 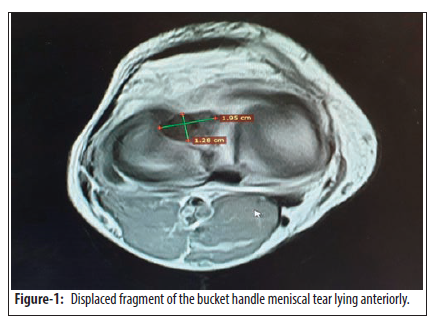 There were no associated injuries to the ACL and the PCL. The medial meniscus also remained intact. Based on history, examination, and radiological findings, a diagnosis of bucket handle tear (BHT) of the lateral meniscus of the right knee joint was made and the patient was scheduled to undergo therapeutic arthroscopy on the next day. On arthroscopy, his BHT of lateral meniscus was confirmed and a meniscectomy was done via trimming the patient’s BHT. The patient experienced postoperative bradycardia for which he was reviewed by a cardiologist. He was stable thereafter and was discharged a day later with oral cefixime 400 mg once daily for three days and diclofenac sodium 50 mg twice daily for three days. He was followed up seven days following discharge in the outpatient department. No personal patient information has been disclosed and a written informed consent was obtained before reporting this case.

In this case, a unilateral BHT of the lateral meniscus of the right knee with no associated injury to the ACL and the PCL, or the medial meniscus is presented. This specific case had an MRI finding of double-delta sign (intercondylar notch), along with evidence of inflammation of Hoffa's fat pad indicating possible hoffitis.

In literature, MRI signs are described such as a double ACL sign occurring secondarily to BHT of the lateral meniscus with the torn fragment trapped behind the ACL giving the appearance of the double ACL sign.11 This sign otherwise typically occurs due to BHT of the medial meniscus. In our case, this was not noted.

Double PCL sign has also been seen due to posteriorly displaced BHT of medial meniscus but that can also be mimicked by a discoid meniscus.5 Triple PCL sign has been reported due to BHT of both the menisci of the knee and ruptured ACL causing the displaced meniscus fragments to be seen in the same plane as the PCL giving a triple PCL sign.12

In a study on 25 patients with arthroscopically proven BHT, V sign (as seen in axial plane) occurred in 66.7% of patients with double-delta sign whereas, in our patient, no V sign was noted.13 In another study of 215 patients with torn ACL, 37 (17%) had an associated major lateral meniscal tear with only 7 (3%) having a BHT.14

Independent risk factors for major tears were male gender, age less than 30 years, and a contact mechanism. In our patient risk factor of male gender and age less than 30 was present but a contact mechanism was not there since there was a twisting of the leg leading to the BHT. There has been a report of injury to both menisci of the knee with intact ACL and PCL in a dancer while in our case medial meniscus along with ACL and PCL were intact with a BHT of the lateral meniscus.15 According to the authors’ knowledge, in the literature, no case of isolated lateral meniscus BHT has been reported showing a double-delta sign on MRI without accompanying ACL and/or PCL injury.

In this case, a rare and isolated BHT was picked in the less common lateral meniscus. This was done by recognizing the double-delta sign which as of now, is not given much significance while reporting meniscal injuries. The double-delta sign has rarely been reported in the past medical literature. Radiologists must recognize this important and subtle sign on MRI which is suggestive of a BHT of the meniscus for early diagnosis and management of the patient. It is also important to be familiar with various other signs to aid the diagnosis of meniscal tears. A precise, early, and correct diagnosis of the meniscal tear, especially a repairable one like BHT can be helpful for the surgeon to plan the meniscal repair procedure and save the meniscus with early intervention.

The journey from drug addiction to drug recovery; a case report of an inpatient rehabilitation

Drug-induced duodenal perforation in the paediatric patient with thalassemia major, an unreported side effect of iron- chelating agent: A case report