Vocal fold nodules are benign vocal cord lesions which develop in voice abusers, including children, though chronic cough, sinusitis, and reflux may also be the causative agents. Since low or no-evidence treatment strategies, like the boone technique, are in use in paediatrics, this study was conducted to determine the treatment strategies used by speech-language pathologists in paediatric vocal fold nodules using a cross-sectional survey at Riphah International University, Lahore, from October 2016 to May 2017. Sixty-five speech-language pathologists working with children in private clinics and multidisciplinary settings were recruited using purposive sampling. A self-structured questionnaire was used for data collection. Analysis using SPSS -18 revealed that a combination of voice therapy and vocal hygiene was the most favoured treatment used by 65 (100%) speech-language pathologists, followed by 58 (89.2%) who also favoured respiratory and relaxation exercises, and 56 (86.2%) who also included parental counselling. Hence, a combination of voice therapy and vocal hygiene is a good therapeutic technique being practiced by speech pathologists for the treatment of vocal nodules among paediatric population.

Vocal fold nodules (VFN) are non-neoplastic lesions at the junction of anterior and middle third of the vocal folds caused due to trauma associated with vocal abuse and many other conditions, including allergies, post-nasal drip, gastroesophageal reflux, chronic cough, and sinusitis.1 Vocal nodules are commonly seen in singers, call centre operators, teachers and even children due to crying, screaming, shouting, yelling, and imitating animal sounds. The predisposing factors include allergies, hearing impairment, upper respiratory tract infections, velopharyngeal insufficiency, environmental noise, attention deficit hyperactivity disorder, and having siblings since it results in over use of loud voice at home.2  The symptoms usually evolve over a year with dysphonic voice characteristics of being hoarse, breathy, low pitch and vocal fatigue.1

Dysphonia in children is common with a prevalence of 6% below the age of 14 years with vocal nodules being the most common cause (22%).3  Common differential diagnosis of VFN are organo-functional pathologies, including polyps and Reinke’s oedema.1  The paediatric VFNs still lack standardised treatment, hence the treatment is extrapolated from work done with adult patients. The options include voice therapy and surgery, surgery alone, voice therapy alone or no treatment. Vocal hygiene as well as voice therapy are the essentially required conservative measures; however, in very few cases surgery is mandated.4  Therapy techniques include direct voice therapy to modify vocal attitudes for a healthy voice, while indirect voice therapies modify the cognitive, psychological, behavioural and physical environment, including the patient’s education, good vocal hygiene techniques and counselling. With low or no-evidence strategies like boone’s technique5 of voice therapy being used in paediatrics, research is required6 to develop techniques, including tailored, evidence-based treatment strategies.7  Henceforth, need for research to appreciate the SLP’s use of voice therapy strategies in patients with vocal nodules is vouched, since this has significant importance due to high prevalence of dysphonic children with nodules and a dearth of local literature. It will help to highlight the voice therapy treatment strategies for vocal fold nodules, and assisting the practitioners in the selection of therapies for their patients. Hence, this study was conducted with the objective to determine the treatment strategies used by speech-language pathologists in paediatric vocal fold nodules.

This cross-sectional study, using purposive sampling, recruited a sample of 65 speech-language pathologists (SLPs) practicing with paediatric population for at least one year in clinics and multidisciplinary settings with no age and gender limitation. The study was conducted at the Riphah International University, Lahore, over a period of eight months—from October 1, 2016 to May 31, 2017. A sample size of 65 was calculated using the on-line calculator for one proportion cross-sectional studies.8

SPSS Version 18 was used to analyse the data. Descriptive statistics were utilised and Chi-square was used to see the associations of responses with qualification of SLPs.  Demographics (Figure) reveal that most 62(95.4%) SLPs were between 22 and 30 years of age, and 57(87.7%) were females. Most 30(46.2%) were holders of master’s degree, out of whom 25(38.5%) had an experience of 0-1 year. The study revealed that a combination of voice therapy and vocal hygiene was most favoured, agreed upon by all the 65(100%) SLPs and followed by 58(89.2%) who also favoured the view that respiratory and relaxation exercises are good; responses revealed significant association with qualification (Table). Of the total, 56(86.2%) SLPs were also of the view that parental counselling was necessary. According to 56 SLPs soft glottal attack was a direct technique and widely used, 52(80%) SLPs were of the opinion that vocal hygiene and educational programme was an indirect technique and necessary. While 52(80%) SLPs agreed that Yawn sign was a direct technique and is the top management option for children with vocal nodules, and SLP’s response showed significant association with qualification. 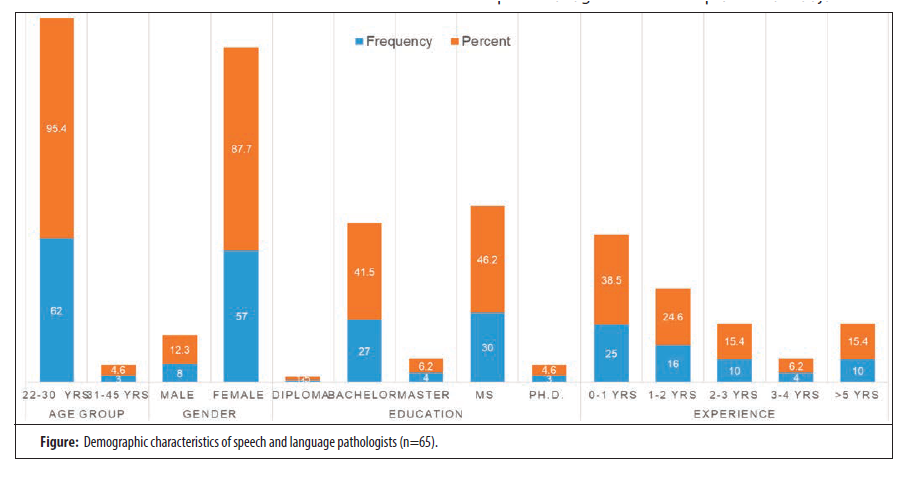 A number of voice therapy strategies are in use, with lack of evidence and pros and cons of their own.9  However, voice therapy is a valid option10  and results in improvement in perceived quality of voice11 with failure cases requiring surgical intervention.4

With hard glottal attack seen quite frequently with bilateral VFNs,12  the current study revealed that in the opinion of 86.2% SLPs soft glottal attack was widely used in treating VFNs in children, since in soft glottal attack vocal cords are less tense, reducing phono-trauma & VFNs.1  Chant talk was also noted to be a good strategy & 86.2% SLPs agree with this because it is known to remove vocal fatigue.1  Most (66.2%) SLPs favour open mouth approach as the best management strategy, since it also causes relaxation and helps to manage VFNs. It is helpful in mass adjustments resulting in optimum vocal cord approximation, thus helping to deal with the problem of pitch, quality, and loudness of voice.13

Vocal hygiene and education programme is essentially required as it is a major part of the management plan of VFNs.14  Hence, in the current study, 80% SLPs agreed to this. Similarly, the result of the current study shows that 80% SLPs established that yawn sigh technique was a useful behavioural technique to deal with hypofunction of the larynx by increasing the supply of air and relaxing the larynx as described in literature,15  since it involves an inhalation with open mouth which is followed by a long open mouth sigh.13  Also, 89.2% SLPs were of the view that respiratory and relaxation exercises were good for treating VFN.

With moderate evidence of focusing resonant voice therapy in clinical practice16  in the current study, 49% SLPs agreed and 12.3% disagreed that resonant voice therapy is not a good treatment. Also, most (63.1%) SLPs stated that confidential voice therapy was not a good treatment strategy, perhaps indicating a lack of sufficient knowledge. In the present data, 81.5% SLPs agreed that environmental manipulation can be performed for improving voice quality, due to negative effects of environmental irritants.

In the current study, majority (86.2%) of SLPs favoured parental counselling since parental counselling has an important role. There was 100% agreement among SLPs that combination of voice therapy and vocal hygiene was the best treatment option, in conformity with the available literature.17

As regards surgery being mandatory for treatment of VFNs, the opinion of SLPs was quite divided, with 44.5% agreeing to it. However, things were clearer when in response to the statement that surgery alone was best for VFNs in children, majority (52.3%) disagreed.

Almost half of the sample, 52.3% agreed that combination of surgery and voice therapy is the best treatment and voice therapy can also reduce the chances of surgical intervention.4  A few SLPs agreed on giving no treatment for VFNs in children because children were not trained regarding how to use their voices safely. However, in reality this can only be done for children in whom nodules start regressing while the children are progressing into adolescence.18

The combination of vocal hygiene methods and voice therapy is the best treatment option for vocal fold nodules.

Limitations: The study had a small sample size, hence the results cannot be generalised.

Disclaimer: The article is part of MPhil (Speech-Language Pathology) Thesis.