Method: The observational, cross-sectional study was conducted at the Department of Nephrology, The Kidney Centre Post-Graduate Training Institute, Karachi, from April 27 to October 26, 2018, and comprised adult patients of either gender diagnosed with anaemia and estimated glomerular filtration rate <90ml/min. Patient with transferrin saturation <20% were labelled as having iron deficiency anaemia. Data was analysed using SPSS 21.

Conclusion: Iron deficiency anaemia was found to be highly prevalent and should be screened routinely and managed appropriately.

Chronic kidney disease (CKD) is a major non-communicable disease responsible for considerable morbidity, early mortality and significant economic burden worldwide.1 Kidney failure is associated with destabilisation of several homeostatic processes that result in adverse disease outcome.2 Among many complications of CKD, anaemia is very common and preventable, but is frequently overlooked.3,4

Anaemia is an important modifiable risk factor for many adverse events in CKD.4 It occurs in early CKD and worsens with declining glomerular filtration rate (GFR).5 It may contribute to cognitive impairment, lethargy, poor quality of life (QOL), increased hospitalisations, left ventricular hypertrophy (LVH) and heart failure (HF).3 Anaemia also has a strong association with CKD progression.5 Moreover, it has been identified as an independent risk factor for major adverse cardiovascular events and mortality.3 Early detection and correction of anaemia is, therefore, cardinal for preventing adverse effects, improving outcomes, reducing mortality and CKD progression.

Anaemia in CKD results from impaired erythropoiesis either due to decreased erythropoietin production or nutritional deficiency of iron and vitamins. Other factors involved include chronic inflammation, gastrointestinal (GI) bleeding, hyperparathyroidism and short life span of red cells in uraemic milieu.3 Iron deficiency is a prime cause of anaemia in CKD and also induces resistance to erythropoietin stimulating agents (ESA) which further worsens renal anaemia.6-8Deficiency of iron may be absolute or functional; and is generally assessed through serum transferrin saturation (TSAT) and ferritin levels.8

Iron deficiency anaemia (IDA) has been extensively reviewed in dialysis population, but literature on prevalence, risk factor and outcome of IDA in pre-dialysis stages of CKD is sparse. Studies have shown varying prevalence of IDA ranging from 5% to >70% of CKD non-dialysis (CKD-ND) patients.9-14It is due to difference in cut-off values used to diagnose anaemia as well as clinical practice to screen for iron deficiency. Kidney Disease Improving Global Outcomes (KDIGO) guidelines recommend routine screening for anaemia and iron deficiency and prompt management of iron deficiency prior to initiating ESA therapy.15 There is paucity of data from South Asia on IDA prevalence in pre-dialysis CKD population. The current study was planned to determine IDA prevalence and its association with demographic and clinical characteristics of CKD-ND population.

The observational, cross-sectional study was conducted in the Department of Nephrology, The Kidney Centre Post-Graduate Training Institute (TKC-PGTI) from April 27 to October 26, 2018. TKC is an urban, tertiary renal facility that caters for patients with renal or renal-related issues.

After approval from the institutional ethics review committee, the sample size was calculated using OpenEpi calculator16 with 95% confidence interval (CI), exposed-to-non-exposed ratio of 1:1, 80% power and relative risks 2.5. It was assumed that 39% patients with CKD-ND have IDA.17

The sample was raised using non-probability consecutive sampling technique. Those included were patients of either gender aged >18years and diagnosed with anaemia and CKD-ND with estimated GFR (eGFR) <90ml/min. Patients with infections, chronic inflammatory conditions, haemoglobinopathies, active bleeding, like GI bleeding, or active malignancy, were excluded. Also excluded were those who had received blood transfusion in the preceding 3 months, iron replacement in the preceding 2 weeks or ESA in the preceding 4 weeks.

Data was collected after taking written informed consent from the subjects. Baseline social, demographic and clinical characteristics of the participants were obtained using a proforma. Body mass index (BMI) was calculated as per the standard kg/m2 formula. Blood samples were collected for haematological and biochemical parameters and were analysed in the institutional laboratory. Complete blood count (CBC), serum iron and total iron binding capacity (TIBC) levels were determined, and TSAT was calculated in terms of percentage (%) using the standard formula of serum iron/TIBC times 100. Data was collected and reviewed by two independent physicians.

Anaemia was defined as haemoglobin (Hb) <13g/dL in males and <12g/dL in females.15 IDA was defined as TSAT <20%.15 The eGFR was calculated using the Chronic Kidney Disease Epidemiology Collaboration (CKD-EPI) equation18 and the participants were classified in terms of CKD stages.19

Data was analysed using SPSS 21. Mean with standard deviation as well as median with interquartile range (IQR) were calculated for continuous variables, while categorical variables were expressed as frequencies and percentages. Stratification was done with respect to age, gender, BMI, CKD stage, CKD duration, rural or urban residence, and co-morbidities, like diabetes mellitus (DM), hypertension (HTN) and cardiovascular disease (CVD) to see their association with IDA. Post-stratification chi-square test was applied, and p≤0.05 was considered statistically significant. 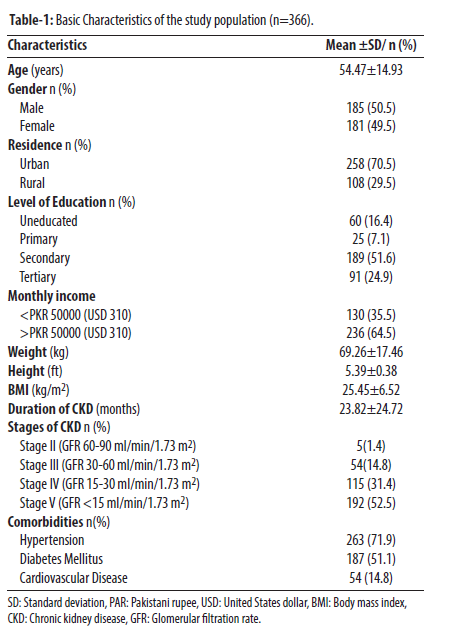 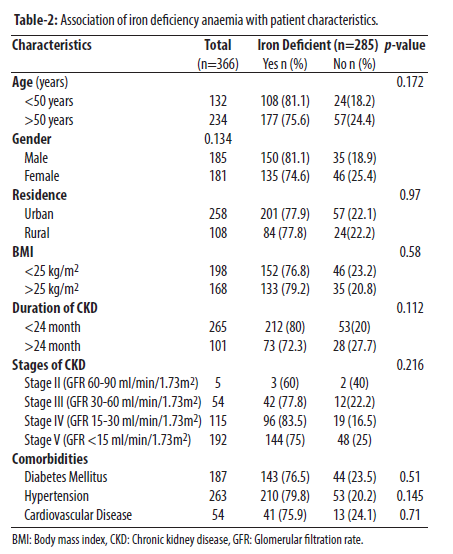 Growing burden of end stage renal disease (ESRD) is a global health concern1 and requires nephrologists to pay particular attention to CKD-ND population to delay progression to ESRD, and thereby reduce morbidity, mortality and exorbitant cost of treatment. Anaemia is a major complication of CKD and an independent modifiable risk factor for CKD progression and cardiovascular mortality. Iron deficiency is a prominent cause of anaemia in renal failure, but is often managed suboptimally.9,11,13,14 Adequate correction of iron deficiency has shown to increase Hb and reduce ESA requirement.20 Despite the clinical relevance, prevalence of anaemia in CKD-ND and its management, in particular IDA, has not been studied comprehensively.

The current study we observed IDA in 77.9% of patients, as indicated by TSAT <20%. Mean serum iron and TIBC levels were 51.61±27.29 and 265.89±71.88 mcg/dL, respectively. Studies have shown varying IDA prevalence ranging from 5% to >70% of CKD-ND patients.9-14It is due to difference in cut-off values used to diagnose anaemia as well as clinical practice to screen for iron deficiency. Fishbane et al. studied a cohort of CKD patients from a large epidemiological National Health and National Examination Survey (NHANES) in the United States for the prevalence of iron deficiency in CKD-ND population11. They found low iron levels in 57.8% to 72.8% cases, as indicated by either ferritin level <100ng/ml or TSAT <20%, and a higher probability of anaemia with lower TSAT levels.11 Awan et al. in their study of CKD patients from US Veteran Administration demonstrated 20.6% prevalence of anaemia. Among patients in whom iron indices were measured, around 50% had either absolute or functional IDA.12 Wong et al. reviewed anaemia, iron status and its management in CKD-ND patients from an ongoing international Chronic Kidney Disease Outcome and Practice Pattern Study (CKDOPPS) in Brazil, France, Germany and US, and a high prevalence of iron deficiency was observed ranging from 42% to 53%9. Minutolo et al. reported anaemia in 17.7% of an Italian cohort of CKD patients. Iron deficiency was observed in 64.9% with severe anaemia and 60.9% with mild to moderate anaemia.13 A study in Japan reported anaemia in 22.5% patients overall and 5% patients had IDA. An additional 10% had iron deficiency without anaemia.10 Cases-Amenos et al. observed iron deficiency in 36% CKD-ND patients.14 Another study assessing iron stores in CKD-ND anaemic patients reported iron deficiency in 48% cases.21 A single-centre study from India reported overall IDA in 67.1% patients which was either functional or absolute, with functional IDA, based on TSAT <20% in 52.6% cases.22

Demographic factors found associated with anaemia in CKD include advanced age, female gender, DM and progressive renal failure.10-14Significant linear association of advanced age with development of anaemia in CKD has been reported by several studies.13 Unlike these observations, the current study did not find significant association between IDA and age.

Generally, IDA is seen more frequently in females.4,9,10,12,23,24 The current found high frequency of IDA in both genders, which highlights the significance of screening iron status of all CKD patient regardless of gender in the evaluation of renal anaemia. Although the current study did not compare IDA prevalence in terms of gender difference across CKD stages, a plausible explanation for the finding could be the reverse-gender pattern of IDA in CKD-ND discussed by Aoun et al.22 who reported increased prevalence of IDA in females during early CKD, and males in advanced CKD.22 However, large population-based analyses are required to draw any inference from this association.

Some studies have reported association of DM with anaemia in CKD.22-25 Increased prevalence of anaemia and iron deficiency in DM possibly results from the combined effect of renal insufficiency and chronic inflammation induced by prolonged oxidative stress.26 Nicolas et al. studied iron deficiency in diabetic and non-diabetic CKD patients and found IDA more prevalent in diabetic CKD patients.25 The current study did not find such an association.

The current study found non-significant difference in the frequency of IDA among patient with CKD stages 3, 4 and 5. In some studies, IDA was found associated with severity of kidney failure.10,28Iimori et al. found IDA patients to have lower eGFR (p<0.001).10 It could be due to insufficient iron intake as a result of decreased appetite and poor intestinal absorption of iron with worsening renal functions. Also, inadequate prescription of iron therapy and ESA may play a role.

The current study did not find any significant association between demographic, social or clinical characteristics of the study population with IDA. This can possibly be explained by the fact that in Pakistan, there is dietary deficiency of iron mainly due to economic reasons and because the diet is composed of ingredients that have plant origin, cereals, grains and tea which inhibit iron absorption.29

IDA is a fairly common yet neglected cause of anaemia in CKD. To the best of our knowledge, limited studies have been done on the frequency of IDA in haemodialysis patients in Pakistan20,31but none on the CKD-ND population which makes the current study first of its kind in Pakistan.

The current study has some limitations. It was done at a single centre with a small sample size, which means the results cannot be generalised. Another limitation is that serum ferritin levels were not checked, and, hence, the presence of absolute or functional iron deficiency could not be differentiated. Regardless, ferritin is considered an unreliable marker of iron deficiency in advancing CKD, and TSAT is considered more sensitive than ferritin.9 Despite the limitations, the study signified the importance of assessment of iron deficiency in early CKD. Further studies should be undertaken to evaluate risk factors and patient-related and clinical outcomes of IDA and its treatment in CKD-ND population.

IDA was found to be highly prevalent in pre-dialysis CKD cases. IDA is an important area to improve quality of care in CKD management. Relevant professional bodies should spread awareness and encourage routine screening and appropriate management of iron deficiency in CKD-ND.