Objective: To determine nurses’ tendency towards malpractice and the factors affecting such a behaviour.

Conclusion: The tendency towards malpractice was found to be low among the nurses in the study, age, duration of work and shifts were significant factors affecting the tendency.

Within the framework of the legal understanding of all health professionals, practices should be carried out within the framework of the concept of "permissible risk" in the shape of complications. In this respect, the health professional is obliged to take possible precautions before the application, except in the case of emergencies. Even if bad results occur due to the action within the framework defined as permissible risk, the situation does not entail any responsibility for the employee because the person has complied with the duty of attention and care. Carelessness and negligence are medically regarded as "medical malpractices".1 Malpractice is often defined as carelessness and neglect. Medical malpractice is defined as an act of commission or omission that harms the patient by deviating from the practices that are generally accepted in the diagnosis and treatment process of the patient by the medical profession.2Medical errors are among the main problems of health systems. There is no health system that does not encounter medical errors.3 During the coronavirus disease-2019 (COVID-19) pandemic, which started in Wuhan, China, in 2019, and affected the whole world, the burden on the health systems increased manifold. It is thought that the increasing burden of treatment and care increases problems in a health system. Nursing errors are a serious threat to patient safety and can lead to increased public concern and distrust of healthcare providers and denial of treatment. Therefore, the causes of nurses' errors, the reasons for not reporting them, and the ways to reduce errors need to be examined.4The alarming increase in disability and death rates due to medical errors in recent years has underscored the need for global effort to provide quality and safe healthcare services.5Medical error has been defined by the Joint Commission for the Accreditation of Healthcare Organisations (JCAHO) as harm to the patient “as a result of appropriate and unethical behaviours of the healthcare professionals ... inadequate and negligent behaviour in professional practices”.5-7Medical error is defined as an act or a situation that harms the person due to the fact that the health personnel did not follow standard medical practices intentionally or negligently, did not apply the right treatment or did not give treatment to the patient.8

Research shows that although medical errors do occur frequently, there is great variability in whether or not these errors are reported. Therefore, employee perceptions associated with organisational culture, climate and commitment, and reporting process are investigated to determine the effects on participants' intentions to talk about medical errors.9,10According to Giraldo et al., safety reporting systems have an important role in improving the quality and safety of health services.11 The World Health Organisation (WHO) has frequently drawn attention to the issue of patient safety, by launching campigns like ‘Safe surgery saves lives’.12 Causes of medical error include human factors, like fatigue, insufficient training, etc., organisational factors, like workplace structure, policies, etc., and technical factors, like inadequate automation, inadequate equipment, etc.13 While malpractice practices cause loss of morale and motivation in nurses, they cause health problems in patients it causes distrust towards employees and dissatisfaction with the health system in the community.14 Within the healthcare team, nurses play a key role in the management of medical treatment, and play an active role in preventing medical errors. The International Council of Nurses (ICN) in 2006 recommended steps to be taken to reduce errors and to ensure patient safety.7,12 According to WHO reports, medical errors and adverse events occur worldwide, including in developed countries, such as Australia, Canada and the United Kingdom.15-17In the United States, every year 44,000 to 98,000 people and and every day at least 100 people die due to medical errors; 40,000 people in England and 5,000 to 10,000 people die in Canada as a result of medical errors; and in Germany, 100,000 medical errors occur every year, leading to 25,000 deaths.18 A study found five main factors causing medical errors and getting under-reported: personal factors, workplace factors, managerial factors, work culture, and error reporting system. These factors were further classified into proximal and distal factors.19 Most nursing errors were in the form of functional errors. Risk factors were divided into nurse, organisation, ward and patient-related factors. The reasons for nurses' failure to report errors included professional reputation and legal problems. Error reduction strategies include nursing education and management controls.20m A study in Nigeria revealed that nurses had good knowledge and perception of medication administration errors.19 A study during which Yiğitsoy was hospitalised in the Turkish Republic of Northern Cyprus (TRNC), stated that nearly half of the nurses (42.7%) made a medication error and more than half (56.5%) witnessed a medication error by a healthcare professional other than her.20

The descriptive, cross-sectional study was conducted in October 2018 at four public-sector hospitals in the TRNC. After approval from the ethics review committee (ERC) of Dr Burhan Nalbantoğlu Public Hospital and Girne American University, the sample was raised. The study universe comprised all the nurses working in the four hospitals. Due to the rather large universe, it was planned to limit the sample to nurses working in the surgical and internal medicine departments, including those working in the outpatient clinics, the laboratories and those in the administrative staff. They were approached and those who volunteered to participate and exhibited speaking, perception, expression and visual skills were included. Those who did not furnish consent were excluded.

After taking informed consent from the subjects, data was collected using the Employee Information Form (EIF) and the Malpractice Trend Scale in Nursing (MTSN).EIF included questions about nurses’ demographic and professional background, like gender, age, educational status, working period, unit, etc., as well as their knowledge regarding malpractice.MTSN ranks nurses’ tendency to commit malpractice through 49 items across five subscales.22 The subscales are: Medication and transfusion practices, Prevention of infections, Patient follow-up and security of equipment devices, Prevention of fallings, and Communication. Each item is scored on a Likert scale; 1= never, 2= rarely, 3= sometimes, 4= often, and 5= always. Higher scores indicates lower tendency to malpractice. The scale’s Cronbach’s alpha coefficient was 0.9524 and that of the subscales was similar to earlier studies.13,25

Data was collected through face-to-face interviews with the subjects according to the nurses’ roster that was taken from the respective hospital administration.

Data was analysed using SPSS 21. Dependent variables comprised nurses’ knowledge and understanding of malpractice and MTSN score. Independent variables were sociodemographic and professional characteristics of the subjects. Chi-square, Mann Whitney U and Kruskal Wallis tests were used as appropriate, and 95% confidence interval (CI) was calculated when necessary. . P<0.05 was considered statistically significant. 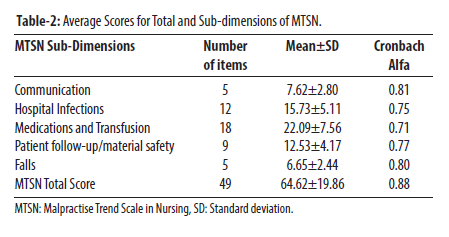 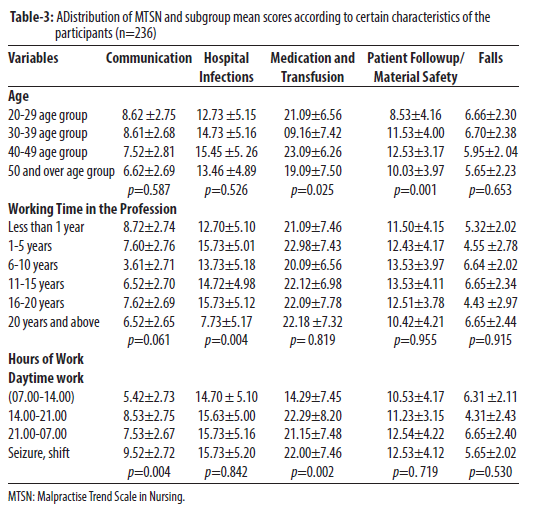 Medical errors made in nursing practice do not hurt the patient and the family alone, but it may cause material and moral damage to the nurse as well.

All the nurses in the current study were women. The majority of nurses in literature happen to be women.16,19,20The nurses in the current study said medical errors were due to carelessness 87(36.9%), not taking adequate precautions during treatment and care 166(70.5%), nurses being new or lacking professional exposure 146(61.9%), intensive workload 172(72.9), not paying enough attention to care 47(19.8%), and most of them said not knowing the legal procedures related to such affairs was a major reason. In addition, the nurses stated that the insufficient number of nurses and the high number of patients in the clinic negatively affected the situation. The participants stated that they believed working as night shift and shift/fixed shift nurses might increase the tendency to malpractice. A study found five main factors causing medical errors and under-reporting: personal factors, workplace factors, managerial factors, work culture and error reporting system.18 According to a study, nurse education and skills, lack of knowledge, fatigue, neglect, outline disruption, negligence during care are the problems.4 Studies conducted under the definition of human factors, institutional factors and technical factors reported findings similar to those of the current study.5,8,13,16The ‘Working Conditions of Nurses in Turkey’ report stated that nurses working long hours posed a risk to patient safety.23

Mean total MTSN and subscale scores in the current study were similar to those reported earlier.20

Medication errors are the most common type of error that threatens patient safety. It has also been reported that patient falls are among the frequently encountered medical errors.14 The findings of the current study are in contrast to those of studies which suggested that patient care was independent of the nurses and the status of the MTSN score.17,25

In the current study, there was no difference between falling patients and MTSNscores.  Patient safety errors are the least frequently reported type of medical errors.3,8

The limitation of the current study is its small sample size owing to the low  reposne rate of 50.3%. The number of nurses compared to the high number of patients in TRNC hospitals and the resultant workload  made it impossbile for many to participate.

In the light of the findings, however, the current study suggests that the mater needs to be explored further with larger samples.

The tendency towards malpractice was found to be low among the nurses in the study, and age, duration of work and shifts were significant factors affecting the tendency.

Disclaimer: The text is based on an MPhil thesis.