Objective: To develop and apply a simple criterion for transfer of patients from intermediate care to general care.

Conclusions: A simple discharge criterion is proposed for intermediate care solely based on clinical

Intermediate care unit, also known as high dependency unit (HDU) or stepdown unit, is defined as a patient-care area with specialised monitoring and nursing care for patients who neither require intensive care nor can be managed safely in general wards. There is wide variability in terminology and definition of intermediate care units. These areas are used for patients who are ‘stepped-down’ from intensive care, or shifted from ward or emergency room for increased care requirements, or post-operative patients.1 Intermediate care units play a very important role in hospital throughput and effective use of intensive care unit (ICU) beds. They shorten ICU length of stay, decrease the proportion of stepdown patients on ICU beds and lead to improvement in hospital throughput.1  They provide a cost-effective alternative to ICUs.2

The prospective, observational study was conducted from July 15 to December 15, 2018, in the intermediate care units of Aga Khan University Hospital (AKUH), Karachi, where these units are called the ‘special care units’ and are part of the Department of Internal Medicine. Karachi is the most populous city of Pakistan, and AKUH, situated in the heart of the city, is a JCI (Joint Commission International)-accredited tertiary care academic medical institute having more than 700 beds, and usually receives a large number of acutely ill patients in intermediate care units on a daily basis. There are about 40 intermediate-care beds divided into three functional units with separate teams of attending physicians and residents. These units receive patients from emergency room (ER), from ICUs after being stepped down, and from the general wards if the condition of a patient deteriorates. In these areas bed occupancy is usually around 100%. The average number of new admissions in these areas is around 10-15 patients per day. The same number of patients are transferred to general care daily.

Despite this high flow of patients, only a small sample could be raised for the current study because of the stringent inclusion criterion of ‘stable’ patients. Approval was obtained from the institutional ethics review committee, and as many patients were included as possible after taking informed written consent from the patients or their first-degree attendants.

The study aimed at developing and applying a simple criterion for discharge of patients from intermediate care to general care, and it was named the GV Criteria, with ‘G’ for Glasgow coma scale (GCS)5  and ‘V’ for vital signs. All adult patients of either gender who met the GV criterion and stayed in intermediate care for at least one day or more were included. The GV criterion is a simple, practically feasible de novo criteria which is exclusively composed of clinical parameters. It was defined as a set of parameters comprising vital signs and GCS score of a patient and had following range of values: mean arterial pressure equal to or more than 65mmHg, heart rate 55-109 per minute, respiratory rate <20 per minute, oxygen saturation on pulse oximeter equal to or more than 95%, supplementary oxygen requirement <3 litres per minute and GCS score equal to or more than 13/15. All such patients were labelled as ‘stable’.

Patients who required non-invasive ventilation, patients on comfort measures only, or patients admitted under the service of the primary investigator were excluded. All eligible patients were examined, and their charts and vital signs monitor were reviewed to collect data regarding age, gender and diagnosis. Readings of blood pressure (BP), mean BP, heart rate (HR), respiratory rate (RR), oxygen saturation (O2 Sats) on pulse oximeter of the monitor and oxygen requirement in litres per minute were collected. If a patient was suffering from atrial fibrillation, the mean of five HR readings was calculated. All data was recorded on a proforma. Prior to the actual study, a pilot study was conducted on 10 patients. 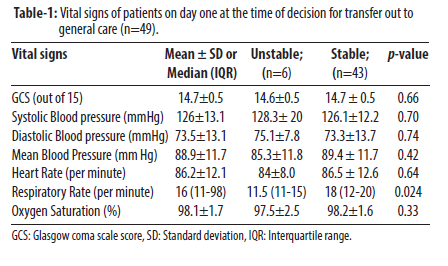 Of the 6(12.3%) unstable patients, 1(2%) each was on account of respiratory distress, atrial fibrillation with rapid ventricular rate, drowsiness, increasing lactate, drop in haemoglobin (Hb) and low BP (Table 3; Figure). Due to significant variation in the diagnoses of study subjects, the diagnoses of all subjects are not mentioned here.

It is obvious that these guidelines purely depend on the discretion of a physician about discharging a patient from intermediate care to general care. No objective criteria have been proposed. One study proposed a well-defined objective criterion4  but it is not based on strong scientific evidence.

The current study is the first of its kind. The proposed GV criterion is unique in its simplicity and time saving qualities. Just on the bedside, and in a matter of 2-3 minutes, an intermediate care physician, or even a nurse, can decide which patient is safe to be discharged out of intermediate care unit.

Despite being very simple, the GV criterion is not an absolutely safe criterion, as the condition of 12% patients in the study deteriorated despite having been labelled as stable under the criterion. However, the GV criterion provides a baseline framework for future large comparison studies, which can refine this criterion further. For example, only lower limit of BP in this study was used. If someone has a BP of 195/110 then such patient will be labelled as ‘stable’ under the criterion, but actually this patient is not stable. This is an important limitation of the proposed criterion. Similarly, the impact of any laboratory parameters in the current study has not been studied. If a patient develops new onset non-ST-elevated myocardial infarction and has high cardiac enzymes, but has stable vital signs, the proposed criterion will have a false reading. Although that patient is vitally stable and is dischargeable to general care as per the criterion, actually this patient needs further stay in intermediate care for monitoring. Similarly, if a patient is having a significant drop in his Hb level, but has stable vital signs, he needs further stay in intermediate care though he may be labelled stable as per the GV criterion. Hence, some important laboratory parameters, like Hb trend, sodium, bicarbonate and lactate, need to be added to the proposed criterion to make it robust enough. However, this addition must be based on scientific evidence and not merely be subjective. The outcome of the patients was not collected who were discharged from intermediate care to general care. Data regarding their outcome, like discharge safely home or shift-back to intermediate care or ICU due to deterioration would have been useful. Data regarding comorbidities of patients and the route of entry of patients to intermediate care, namely ER, general care or stepped down from ICU, was not collected by the current study which would have been useful. Had the comparison data been collected, it would have increased the worth of the results.

Despite the limitations, the current study can be helpful in the triage phase. One patient in the study was held in intermediate care due to family request. This is a unique example. The families should be properly counselled before discharging their patients to general care. Family request, ideally, should not be entertained in this regard as this must purely be a decision of the primary physician.

The simple discharge criterion was effective, but was not robust enough for due application. Further studies are required to formulate a more robust criterion for this important patient population.