A prospective randomised control trial (RCT) was conducted in National Institute of Rehabilitation Medicine (NIRM), Islamabad, on 40 children with hemiplegic cerebral palsy (HCP). Children between the ages of four and12 years with ipsilateral, bilateral or severely asymmetrical impairments who had wrist extension (20°) and fingers flexion (10°) were included. The outcomes tools, Box and Block Test, Quality of Upper Extremity Skill Test, CP (Quality of Life) and Kid screen were used at baseline, mid- and post- treatment assessment. Both the treatment approaches (CCIMT AND MCIMT) equally improved upper limb motor functions and psychosocial life of the children with HCP. On Quest tool, results of dissociated movement were significant (p=0.021) and on CPQOL tool two domains (participation & physical health and family health) showed significant difference (p=0.042, p=0.025). But no significant difference was noted regarding other domains of the tools. The study concluded that both the treatment approaches (CCIMT AND MCIMT) are effective in enhancing the upper limb motor functions and psychosocial life of children with HCP.

Cerebral palsy (CP) is a group of disorders affecting patient’s everlasting movement. In Hemiplegic CP, patients have impairments in one side of their body (decreased range of motion, strength, coordination, and sensation) often affecting their bimanual activities and limit their day-to-day activities.1 Usually, hemiplegic CP patients receive occupational and physical therapy to increase functional skills.2  Constraint-induced movement therapy (CIMT) is a new technique to treat hemiplegic patients; it facilitates the use of hemi paretic upper limb through constrains of the unimpaired limb.3  Classic CIMT (CCIMT) involves the restraint of unimpaired Upper Extremity (UE) with mitt, slings or some other device for 90 percent of the day for 15 consecutive days. The patient engages in six hours of rigorous training of involved UE for 10 to 15 days using a set of tasks involving repeated actions.3  The Modified CIMT (MCIMT) protocols similarly employs constraining of the sound limb, but there are modifications in the types of constraint, intensity of treatment, and dose of innervations.4  Literature shows that both CCIMT and MCIMT are effective treatments to improve the UE functions in children with CP. However, there is conflicting evidence about which is more effective. The purpose of this study was to compare the effects of CCIMT with MCIMT on upper limb motor functions.

This study was registered on October 1, 2018, and the first participant was randomised on October 15, 2018. Data was completed on March 1, 2019. It was a single blinded randomised control trail conducted in the National Institute of Rehabilitation Medicine (NIRM), Islamabad. Patients with hemiplegic CP were randomly divided in Classic Constraint-Induced Movement Therapy (CCIMT) group (n=20) and Modified CIMT (MCIMT) group (n=20). Sample size of 40 participants, 20 in each group, was  calculated by open Epitool calculator with 95 % CI, power 80% and ratio of sample size (Group II/Group I),1  using the primary outcome measure.5 Written informed consent was assigned by parents of all participants. Four to 12-year-old children with ipsilateral, bilateral or severely asymmetrical impairments who had wrist extension (20o) and fingers flexion (10o) were included. Assessment was done at baseline (0 week), second week and third week of intervention. The outcome tools used were: Box and Block Test (BBT) which measures the gross manual dexterity,6 QUEST that is used to measure the UL functions,7  CP (QOL) is used to measure the quality of life for children with CP (including psychological and social life)8  and Kid screen tool is used to assess the children and adolescent’s subjective health and well-being.9  The CCIMT group received daily task practice of impaired limb for six hours a day, five days a week, for three weeks and constraint of unaffected upper limb with mitt or sling for 90% of  the waking hours  for three weeks.10  The MCIMT group received the same protocol as the CCIMT group for two weeks, and received daily task training involving both hands for two hours a day, five days per week, for two weeks. Therapy was provided to the children in their home setting. Parents were guided about the timing of restraint and treatment programme. The type of removable constraint used was a mitt that was restraining both the elbow and the hand was constraint by a sling strapped to the trunk. For the convenience of the children’s parents, the tasks (similar to daily activities) were given in printed form. The daily tasks to be practiced were reaching activities, grasp, manipulation, releasing activities and weight bearing on UL. The participants’ distribution in groups is shown in Figure.

Independent sample T-test and Friedman test were applied to check the differences between the two groups and comparison within the group was made by applying the One-Way Repeated Measure ANOVA.

Total scores of all outcome measures (Table 1) showed non-significant difference (p>0.05) between the groups, although within the group analysis showed significant improvement (p<0.05) (Table 2, 3); it showed that both the treatments equally improved the functions of the upper limbs. 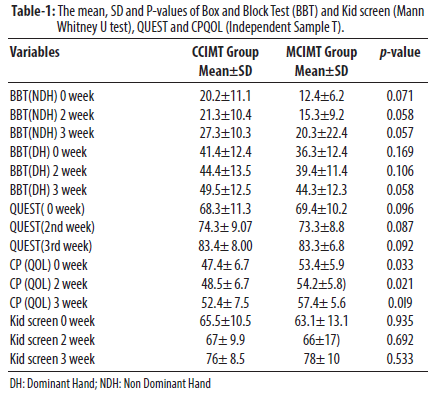 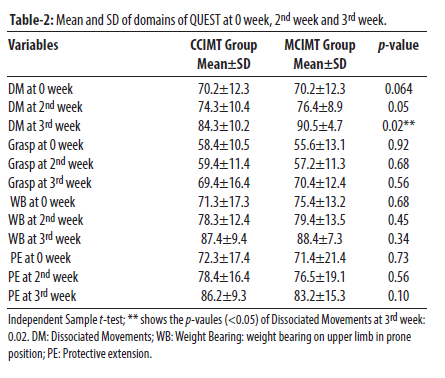 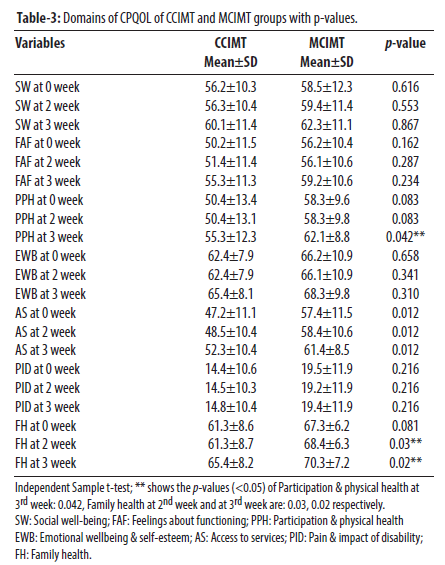 Overall, the results of this study showed that both treatment approaches are effective, because no statistically significant difference (p>0.05) was observed between the two groups, although within the group analysis showed significant (p<0.05) results. Both the treatments equally improved the functions of UL and had beneficial effects on the psychosocial life of the children.11  CCIMT is effective in enhancing the dissociated movements (QUEST), participation and physical and family health (CPQOL), while no difference was observed between CCIMT and MCIMT in QUEST (grasp, weight bearing, protective extension), BBT dominant hand, BBT non-dominant hand, and CPQOL.11  Mean difference of dominant hand of the MCIMT group was greater than that of CCIMT on the third week, which showed that MCIMT is effective in enhancing the manual dexterity of the dominant hand. Leanne Sakzewski used the BBT as secondary outcomes measure in unilateral CP to compare the effect of hybrid (modified) CIMT and standard care, and concluded that both the treatments improve the gross manual dexterity of the affected hand.12 QUEST was used to see the quality of UL functions. Different domains of QUEST were analysed. There was improvement in dissociated movements between the groups which showed that CCIMT treatment is move effective than MCIMT. But there was no statistical difference in grasp, weight bearing, and protective extension between both the groups.13  Another study showed that overall mean score of QUEST and Kid screen test improved in both the groups after intervention.14

The study concluded that both the treatment approaches can be used to improve the UL motor functions, such as gross movements, manual dexterity, dissociated movements, and psychosocial life of children with hemiplegic CP.

10.     Abdullahi  A. Effects of  number of  repetitions and number of  hours of shaping practice during constraint-induced movement therapy: a randomized controlled trial. Neurol Res Int 2018; 2018: 5496408.

14.    Ilieva E, Ilieva A. What is the effect of constraint‐induced movemen therapy on children with unilateral cerebral palsy? A Cochran Review summary with commentary. Dev Med Child Neurol 2020; 62 1236-8.

Emergency management of avulsion injuries: from home to clinic: A multicentre cross-sectional survey among medical doctors and general public