Conclusion: Adenine-1012-Guanine polymorphism in the vitamin-D receptor gene was found to be a protective polymorphism for coronary artery disease in the recessive model.

Coronary artery disease (CAD) is the most prevalent cardiovascular disorder, characterised by thrombotic occlusion, or atherosclerotic plaque, of at least one of the major coronary artery. Various hereditary and biological elements are associated with the development of this complex disorder.1 Vitamin-D (1, 25-fihydroxycholecalciferol) is a fat-soluble vitamin obtained from sun exposure, food and supplements.2 Literature has shown that deficient vitamin D levels affect the musculoskeletal, immune and cardiovascular systems.3,4 While sustained efforts have been made to determine the protective role of vitamin D in cardiovascular disorders, the molecular dimensions of this relationship remain unrevealed. Vitamin D executes its biological activities by binding to the vitamin D receptor (VDR), a transcription factor found in nearly all body cells. VDR is coded by extremely polymorphic vitamin D receptor gene (VDRG) of 100kb, situated on the 12q13 chromosome, and is found to control the functions of more than 200 genes. The VDRG is formed by 6 alternatively spliced, non-coding exons 1a, 1b, 1c, 1d, 1e and 1f, while there are eight coding exons, from 2 to 9.5 Several single nucleotide polymorphisms (SNPs), such as ApaI, FokI, TaqI, and BsmI in VDRG have been studied to determine their association with cardiovascular illnesses,6,7 but reported findings are contradictory.

The Adenine-1012-Guanine (A-1012-G) polymorphism (rs4516035) is a functional variant located within a GATA core sequence of the 1a promoter region characterised by an adenine (A) to guanine (G) substitution.8 VDRG 1a promoter is highly conserved among mammals. Allele "A" has GATA-3 binding site, whereas "G" allele lacks this segment. The GATA-3 sequence suppresses the transcription activity of VDRG, which, in turn, decreases transcription/translation of VDR protein.9 Intrinsically, VDR suppresses the signalling of nuclear factor kappa B (NF-kB), a transcription factor involved in controlling a wide range of genes, including those that regulate immunity and cytokine secretions.10

Omentin-1 is an anti-inflammatory cytokine that is highly expressed in epicardial adipose tissues. Its plasma level is 100ng/ml. Serum omentin-1 concentrations in CAD patients have been found to be inadequate in several trials.11,12

Reduced transcriptional activity of the VDR alters the various protective mechanisms regulated by vitamin D, as human VDR (hVDR) lacks the TATA and CAAT boxes.13 Therefore, it may be associated with the modulation of omentin-1 by VDR/ NF-kB signalling and may be correlated with the progression of CAD. The current study was planned to establish the relationship between the A-1012-G polymorphism of VDRG and CAD.

The case-control study was conducted from January to June 2020 at cardiac unit of Civil Hospital Karachi. After approval from the institutional ethics review committee, the sample size was calculated using Open-Epi software14. Non- probability purposive sampling was used for the required samples. Those included were adult CAD patients of either gender who met the study criterion of 50% or more reduction in luminal diameter in at least one of the major coronary arteries coronary angiography. Those with acute infections, malignancy, valvular heart disease, liver and renal disorders, or taking vitamin supplementation were excluded, and so were those not willing to participate in the study. The control group was raised from among individuals matched for age and gender who visited the cardiac outpatient department (OPD) with a history of chest pain, breathlessness and hypertension (HTN), but were free of angiographic evidence for CAD. Also included were apparently healthy subjects with no previous history of chest pain, and CAD medication. 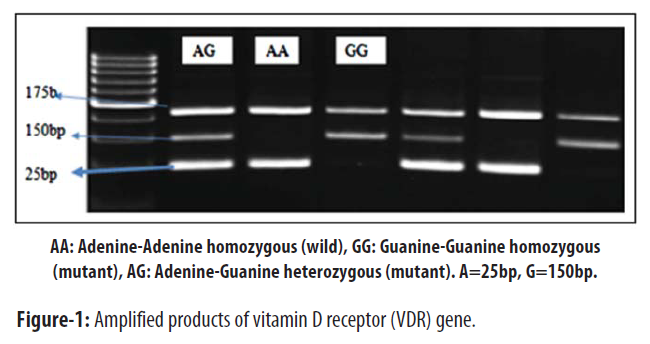 Data was analysed using SPSS 17. The Hardy-Weinberg equilibrium was calculated. Chi-square test was used for the assessment of allelic and genotypic frequencies. To explain the relationship between various genotypes and risk factors for CAD, Mann-Whitney-U test was used and regression analysis was performed. P<0.05 was supposed to be statistically significant. 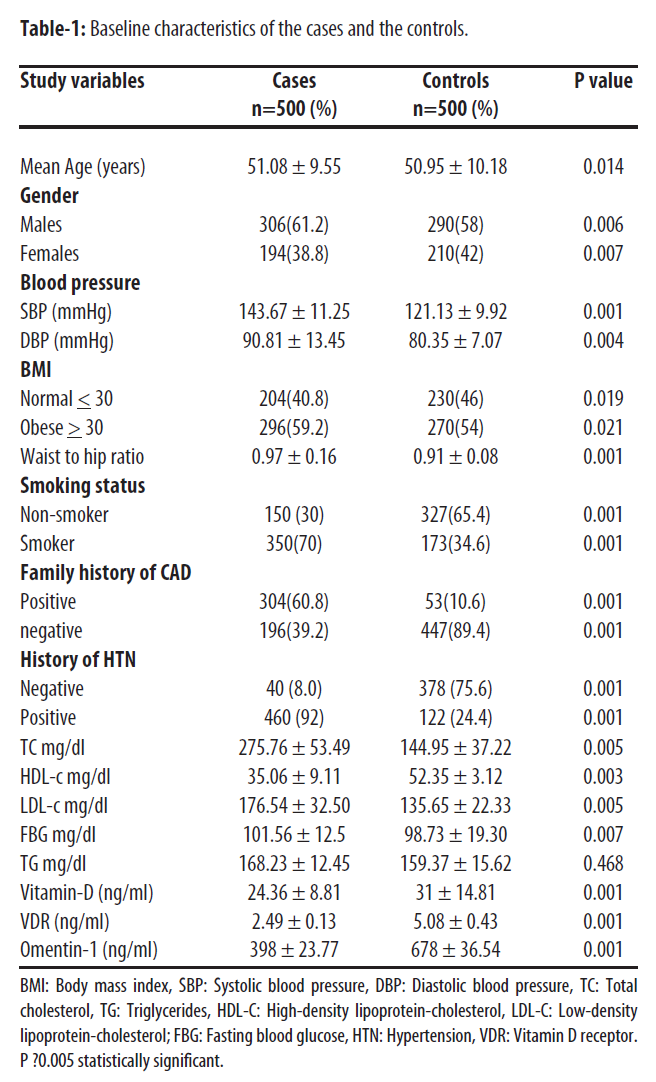 The mutant G allele was more prevalent in controls 261(52.2%), and had a non-significant correlation with CAD (p=0.45). Among the cases, the wild AA genotype had a higher prevalence 402(80.4%) and had a significant correlation with CAD (p<0.001). The heterozygous genotype Adenine-Guanine was significantly more predominant among the controls 346(69.2%) compared to the cases 66(13.2%) (p=0.002). The dominant and recessive models were also analysed in Table-2. 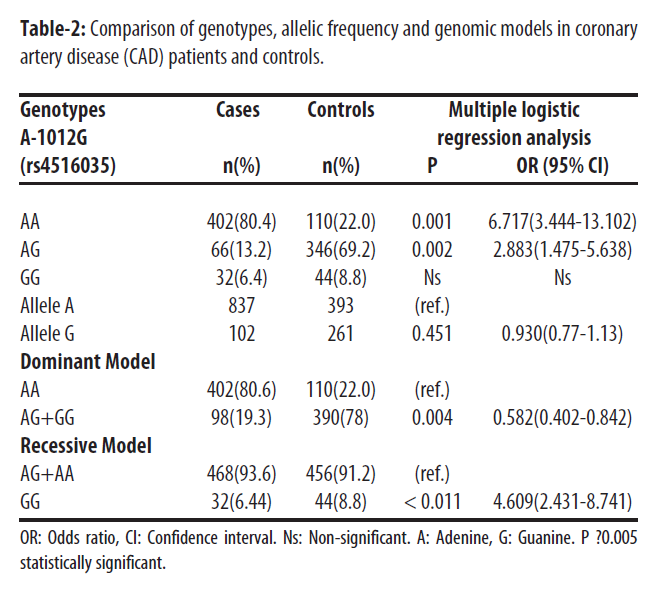 The association of polymorphisms with risk factors for CAD are shown in Table-3. 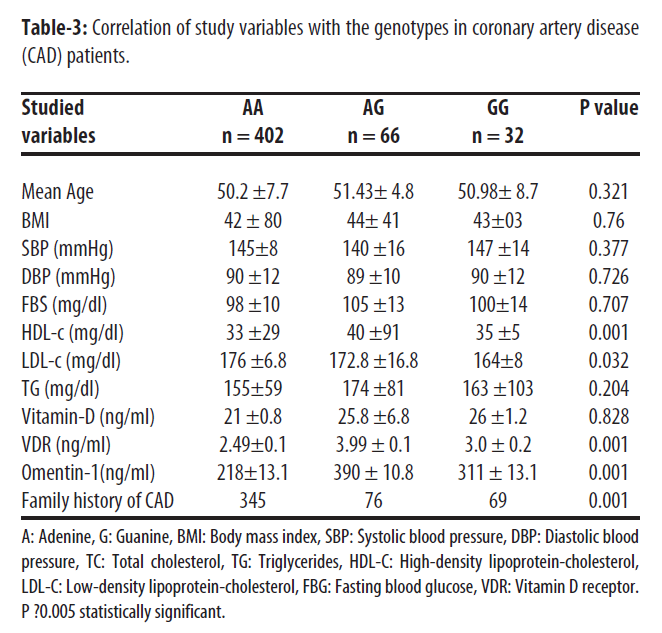 Vitamin D is a pleiotropic, anti-inflammatory molecule. It is not simply related to calcium and bone metabolism, but also has immuno-regulatory, anti-angiogeneic and anti-oxidant properties.13 Biochemical activities of vitamin D are mediated by VDR, which is a nuclear, ligand-dependent transcription factor that particularly binds vitamin D to form heterodimer with retinoid X receptor and conjuncts with the nucleotide sequence of target genes for various biological reactions.15,16 The different functional polymorphisms of VDR have been revealed by literature, including Cdx2, Apa1, Bsm1, Fok1, and Taq1. These variants have been intensively studied with different tumours and diseases.17-19 However, much less data is available in relation to CAD.

The present study found that A-1012G polymorphism (rs4516035) was frequently present in both the cases and the controls, but homozygous genotype AA was present more frequently in CAD cases, whereas the controls were found to have increased heterozygous mutant genotype AG.

In the promoter region of the VDRG, the position of the A allele is -1210 to the transcription start site. Compared to the G allele, it behaves like a dominant allele in relation to an increased likelihood of CAD, whereas the heterozygous AG genotype decreases the possibility of CAD development. An important correlation between the studied polymorphism and serum omentin-1 and serum VDR protein has also been identified. Omentin-1 and VDR serum levels have been found to be elevated relative to the AA genotype in comparison with mutated AG genotype, indicating that AG is a defensive genotype that decreases the risk of disease by increasing an anti-inflammatory adipokine omentin-1.19

Literature has revealed that transcription factor NF-kB modulates a wide range of genes in different cells and directly involves in the expression of various pro- and anti-inflammatory adipokines, chemokines and interferons,20,21 Therefore, a promising new age has opened up for the study of signalling pathways involved in multiple gene transcription, and it seems reasonable to explore VDRG polymorphisms due to its direct association with NF-kB signalling.

The intracellular inhibitor of nuclear factor kappa B-alpha (IkBa) protein acts as a negative NF-kB regulator, preventing the binding of NF-kB to the DNA fragment (Cis-DNA). The VDR and vitamin-D complex, on the other hand, physically binds to IkBa and can modulate inflammatory cytokine secretion by inhibiting transcription based on NF-kB22 (Figure-2). 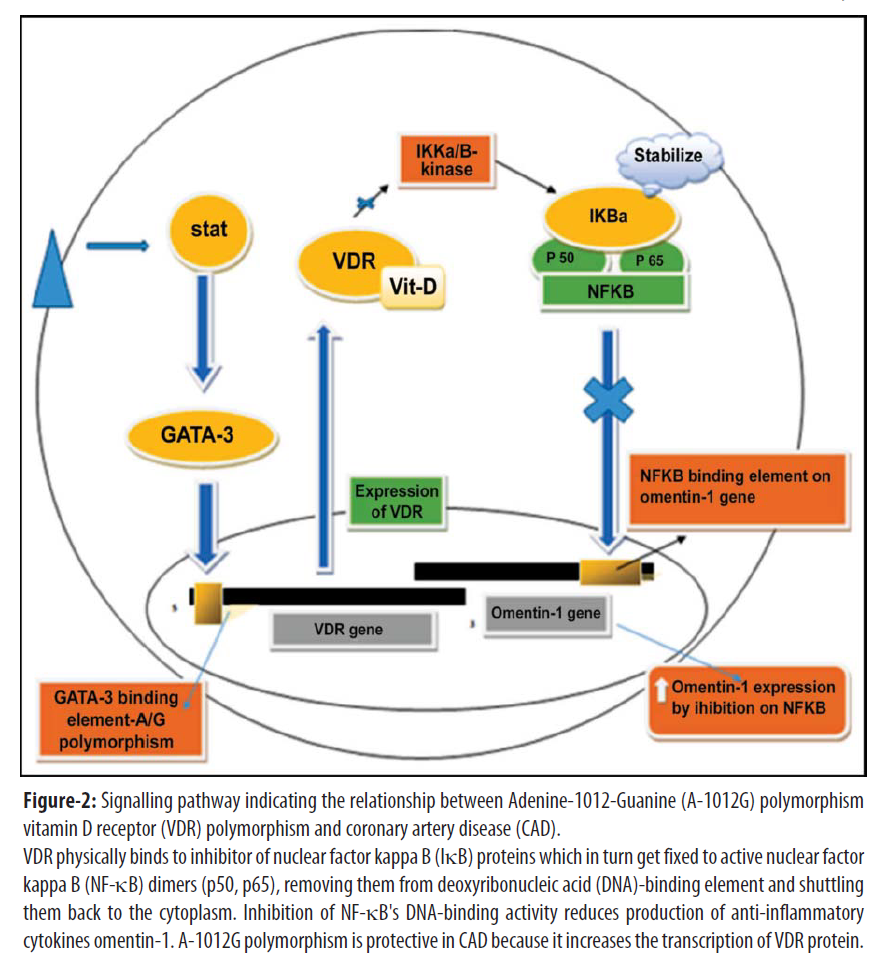 Functional genetic polymorphisms in the VDR gene lead to dysfunctional receptors and consequent downstream vitamin D-mediated outcomes. NF-kB-IkBa balance may get destabilised due to this impairment, resulting in reduced secretion of anti-inflammatory cytokines, and, hence, is directly linked to CAD progression.

In the current study vitamin D levels were found high in controls compared to the cases. The correlation of vitamin D deficiency with CAD has been investigated in many studies and is found to be associated with elevated plasma renin-angiotensin activity, HTN and atherosclerosis.29,30 Vitamin D was also found in the regulation of the release of chemokine and adipocytokine by adipocytes.

VDR polymorphisms may influence the inflammatory pathways by affecting adipocytokine levels, and, thus, they might play a role in CAD progression.

The current study can be used to identify CAD-protective SNP in VDRG in humans and to understand the inter-individual variation in drug response.

A-1012G polymorphism (rs4516035) in the VDR gene was found to be a protective polymorphism for CAD in the recessive model.