Methods: The prospective interventional study was conducted at the Indus Hospital, Karachi, from January 11, 2017, to January 10, 2018, and comprised diagnosed pre-dialysis chronic kidney disease patients of either gender aged >14 years having vitamin D deficiency. Oral vitamin D 50,000IU was given weekly to those who had severe deficiency <10ng/ml, and every other week to those with less severe 10-25ng/ml deficiency for 3 months. Improvement in vitamin D level was checked along with other chronic kidney disease markers every month over the 3-month period. Data was analysed using SPSS 24.

When we take nutritional vitamin D (cholecalciferol / ergocalciferol) from dietary sources, it gets hydroxylated in the liver first and yield 25-hydroxyvitamin D (25OHD) which is subsequently hydroxylated in the kidney before it becomes active vitamin D (vit.D) which is also called 1, 25 dihydroxylated.1 The half-life of this active vit.D is 4-6 hours, compared to 2-3 weeks of 25OHD which is the storage form of vit.D, with the site of storage being the liver.2 The vit.D which is commonly requested in the laboratory is this storage form which circulates 1000-fold higher concentrations than active vit.D. After large amount of ingestion of vit.D, much of the excess is stored in adipose tissue and when these sites become saturated, vit.D remains in the serum and is converted to toxic levels (>150 ng/ml).3

There are 5 stages of chronic kidney disease (CKD) based on glomerular filtration rate (GFR), and mineral bone derangement starts usually when CKD progresses beyond stage 3. Therefore, vit.D levels come under risk in CKD in association with the already widely prevailing deficiency of vit.D in the local population.4 The others commonly identified risk factors of vit.D deficiency are poverty, improper diet, poor calcium intake, dark pigmented skin, and low sun exposure.5,6 As CKD is associated with decreased vit.D metabolites, it contributes to hyperparathyroidism, which is a high turnover bone disease, in addition to the contribution of hyperparathyroidism by derangement of calcium and phosphorus. With the constant stimulus to parathyroid gland in CKD, it leads to increased secretion of intact parathyroid hormone (iPTH), which mobilises minerals from the skeleton and increases the risk of fractures, in addition to increasing the risk of cardiovascular disease (CVD).7 Therefore, it becomes of paramount importance to treat vit.D deficiency with nutritional vit.D initially before moving to the second step of using active vit.D in the shape of calcitriol, which is a phenomenon of advanced CKD stages.8,9 This helps in delaying secondary hyperparathyroidism and thus reduction in the incidence of bone fracture and cardiovascular morbidity and mortality. This role of vit.D in ensuring of cardiovascular health along with control of blood pressure (BP) is assumed secondary to ubiquitous presence of vit.D receptors in the body.10

Patients seem more comfortable with the oral form of vit.D than the intramuscular (UM) form. This is usually because of fear of injection and dependency on someone to administer the injection. Another potential hazard with injection is haematoma as most CKD patients have platelet dysfunction and carry bleeding risk.11 There is no uniform nutritional vit.D replacement regimen and has been tried differently in previous studies.12-14 In the light of these studies, oral form of vit.D replacement with weekly dose 50000 IU in severe vit.D deficiency <10ng/ml and fortnightly in less severe deficiency 10-25ng/L for 3 months followed by individualised frequency depending on response would be easy and safe.12-14

CKD is defined as abnormalities of the kidney structure or function, present for >3 months, with implications for health.15

The current study was planned to see the efficacy of oral cholecalciferol administered to CKD patients with vit.D deficiency.

The prospective interventional study was conducted at the Indus Hospital, Karachi, from January 11, 2017, to January 10, 2018. Non-probability convenient technique of sampling applied and size calculated using open epi software16 with Confidence interval: 95%, Prevalence of vitamin D deficiency was set as 50.8%17 With Desired precision: 6%. Those included were diagnosed pre-dialysis CKD patients of either gender aged >14 years having vit.D deficiency CKD pre-dialysis reporting for outpatient follow-up. Those already taking any kind of vit.D, calcium or calcium-containing medicine, like calcium carbonate or calcium acetate, for at least last one month were excluded.

Data was collected after taking informed written consent from each subject which included demographic details, detailed history and a general physical examination comprising all relevant investigations.

Oral vit.D (cholecalciferol) 50000IU was given weekly to those with severe vit.D deficiency level <10ng/ml, and fortnightly to those with less severe deficiency 10-25ng/ml. Both groups were followed every month till 3 months and each time compliance with vit.D was checked and investigation was done with calcium, phosphorus, alkaline phosphatase, vit.D, iPTH and serum albumin. Estimated GFR (e-GFR) was calculated using equation of modification of diet and renal disease (MDRD).18 Data was analysed using SPSS 24 and Rstudio software. Mean ± standard deviation and median values with interquartile range (IQR) were computed for quantitative variables. Categorical variables were presented as frequencies and percentages. Repeated-measure correlation was applied to check significant correlation of vit.D with other bone mineral markers. Friedman test with Durbin-Conover test for pair-wise comparison was applied to assess difference in bone mineral markers over the 3-month intervention period. P <0.05 was considered statistically significant. 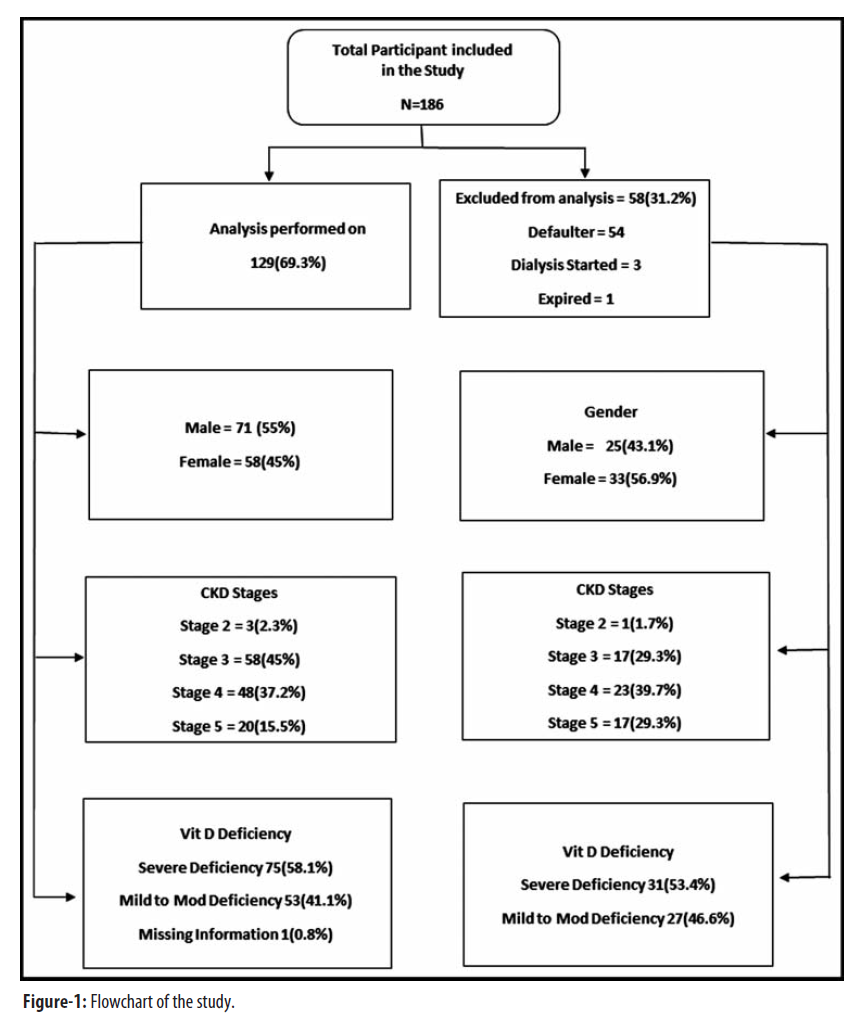 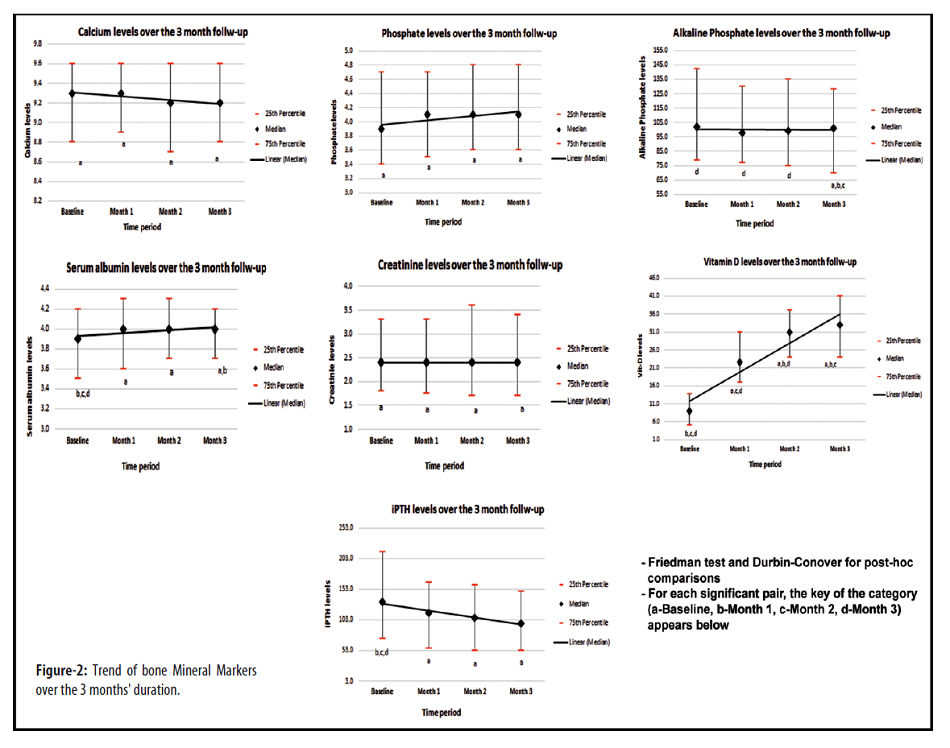 The regression model showed that with progression of disease, median iPTH levels increased adjusting for other variables, but the result was not significant (p>0.05). With the increase in vit.D and calcium levels, the IPTH levels dropped (p>0.05). 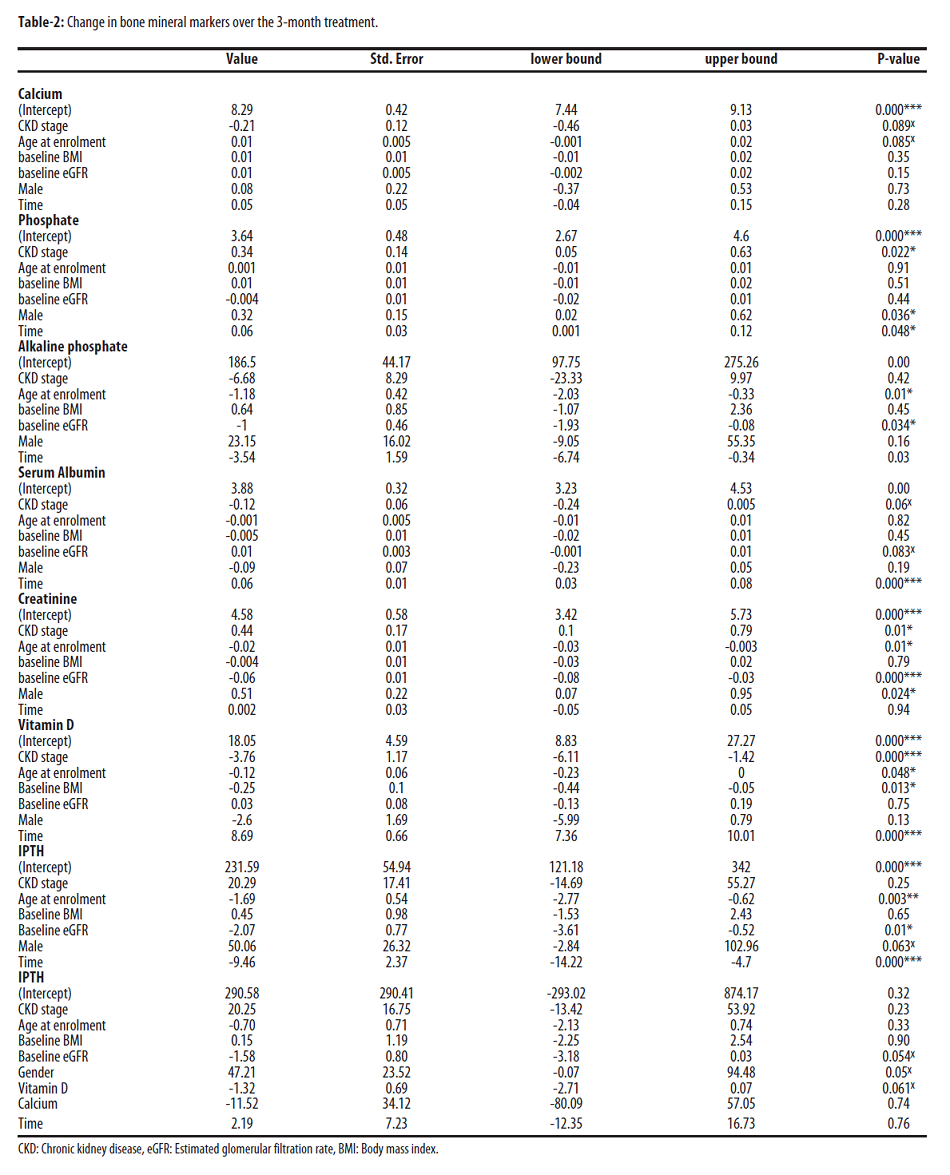 The main form of vit.D, 25OHD, circulates in serum with half-life of approximately three weeks. It is regarded as the best measure of vit.D status in the body representing both nutritional and skin synthesis sources. Vit.D has been linked with evidence for progression of CKD which is considered a powerful predictor of CVD.19 Wordwide estimated vit.D deficiency or insufficiency affects more than a billion people, and in CKD cases, around 70-80% prevalence of vit.D deficiency has been observed in some parts of the world.20

When nutritional vit.D is administered, the 25OHD level increases and, as a result, PTH decreases. It is suggested that 30ng/ml level of vit.D is the inflection point where no further decline of 25OHD level has been observed, but there is a lack of agreement regarding the definition of vit.D deficiency possibly due to differences in the study populations or in the assays used to measure 25OHD.21 In the early course of CKD, derangement in mineral bone profile should be evaluated by measuring iPTH, and interventions should be undertaken using a "stepped care" model.

In the current study, significant increasing trend was observed in vit.D levels over a 3-month period, and iPTH levels decreased significantly over the course of treatment without significantly affecting calcium, phosphate and creatinine levels. A study tried weekly vit.D with similar dose for 3 months in CKD stages 3-4 patients, and found 78% restoration of vit.D, but when the same dose as was tried as maintenance, it proved inadequate.22 One study done in CKD patients with oral cholecalciferol dose of 40000IU on a weekly basis for 8 weeks found adequate replenishment of vit.D.23

A study on 43 CKD patients on dialysis, after dividing them into placebo and cholecalciferol groups, found cholecalciferol effective and safe in terms of increasing vit.D levels and decreasing iPTH without negatively affecting calcium or phosphorus levels.24 The finding supports the current study. Another study25 with a cholecalciferol dose of either 5,000 IU or 20,000 IU found similar results.

The current study also saw positive but weak correlation between albumin and vit.D levels. Another study used 50000IU/week cholecalciferol for 12 weeks in CKD stages 3-4 patients raised the mean value for 25OHD to almost 50ng/ml and showed a 31% decrease in PTH in the treated group compared to 7% decrease in the placebo group.26 All these studies suggest the safety of using nutritional vit.D in secondary hyperparathyroidism without the risk of hypercalcaemia.

In terms of comorbidities with vit.D deficiency, the current study found hypertension as the commonest comorbidity, followed by diabetes and ischaemic heart disease (IHD). This is line with literature.27 One study found diabetes as the most common comorbidity, and lower eGFR and higher proteinuria were also noticed.17

Albuminuria is often considered a major risk factor and important marker for progressive decline in kidney functions, with multiple studies reporting an inverse relationship between the degree of albuminuria and the level of Vit.D.32 In the current study, there was a positive but weak correlation between albumin and vit.D levels. Old age and high baseline BMI came out to be the significant risk factors of vit.D deficiency. Progression of chronic kidney disease affects vit.D deficiency negatively. Serum albumin is improved when vit.D is corrected, and this finding needs to be studied further to understand it better.

Administration of nutritional vit.D as oral cholecalciferol was found to be safer and effective in managing vit.D deficiency in CKD patients. This may help in the management of secondary hyperparathyroidism, reducing the risk of fracture and cardiovascular complications.

18.     Poggio ED, Wang X, Greene T, Van Lente F, Hall PM. Performance of the modification of diet in renal disease and Cockcroft-Gault equations in the estimation of GFR in health and in chronic kidney disease. J Am Soc Nephrol. 2005; 16:459-66.