Objective: To determine the frequency of malocclusion features, convex facial profile and non-nutritive sucking habits among children with and without early weaning.

Methods: The cross-sectional study was conducted at the National Institute of Child Health, Karachi, from June to December 2020, and comprised of either gender aged 3-6 years. The subjects were clinically examined, and details of lactation period, bottle feeding, thumb and pacifiers sucking were gathered from the parents to assess association with malocclusion. Data was analysed using SPSS 20.

Conclusion: Early weaning was found to be a factor in establishing non-nutritive sucking habits, and was strongly associated with crowding, disturbed vertical overlapping of incisors and developing decreased facial height. Breastfeeding for less than the recommended duration had a tendency to lead to anterior cross-bite.

Malocclusion, a developmental condition of the maxillofacial system, is caused by moderate to severe distortions in normal development. There is a list of possible causes, but scientists are unable to associate a single known cause to the problem. In 60% cases, its aetiology remains undefined and in only 5% cases the cause is known.1 The American Association of Orthodontists (AAO) advises that every child should be examined by an orthodontist by the age of 7 to diagnose if the child has the tendency to develop malocclusion and for early diagnosis of any malformations to intercept it in the growing phase.2

The importance of genetic factor as an aetiology has been decreasing and the understanding of inherited causes has been focused upon by researchers who found that alterations in normal patterns, like breathing and non-nutritive sucking habits, are contributory causes.3 The aetiology of malocclusion is closely related with maxillary and mandibular growth and development, so keeping an eye on very early growth can help find deviation from the normal pattern.

Sucking habits are environmental variables that directly affect the development of oral structures. Breastfeeding and bottle feeding are grouped under nutritive habits, whereas thumb sucking, digit sucking and pacifier use are categorised as non-nutritive sucking habits. The second category not only calms and comforts the infant, but provides sense of security and pain relief during painful procedures, like immunisation. A positive connection has been found between non-nutritive sucking habits and decreased infant sudden death syndrome.4

Non-nutritive sucking habits develop in response to insufficient breastfeeding and to survive frustration, insecurity and the desire of contact.5

Studies agree that the development of these habits can be due to modernisation, as the number of working women is increasing and breastfeeding duration is decreasing, which promotes digit and thumb sucking.6

Studies on ancient skulls have proved the effects of food evolution on oral development, how the processed food and decreased muscle usage has influenced jaw size and teeth, like the missing lateral incisor. Mother's milk, the first food of a child, contributes to the normal jaw pattern. Ultrasonographic (USG) studies showed remarkable difference in muscle activities among breastfed and bottle-fed children,7 with the former showing peristaltic muscular activity and the latter having a piston-like effect. The World Health Organisation (WHO) recommends 6 months of exclusive breastfeeding and 2 years of total breastfeeding.8

An infant has to put less effort to get milk from the bottle compared to breastfeeding which may have negative impact on alveolar ridge and palatal growth, leading to malformations, including short mandible, increased overjet, increased overbite, distal step occlusion and posterior crossbites. A cohort study in southern Brazil reported that overjet affected 34% of the children, anterior open bite ~37%, posterior crossbite nearly 10%, and moderate/severe >25%. A study reported the prevalence of distocclusion, convex face profile and non-nutritive sucking habits 37.3%, 8% and 72% respectively in Chennai population.8 Another study in India showed significant association between early weaning and non-spaced dentition, and of non-nutritive sucking habits with distoclusion and convex facial profile. The prevalence of distoclusion, convex facial profile and non-spaced dentition was 18.6%, 16.1% and 40.2% respectively.9

While the connection between short duration of breastfeeding and malocclusion is established, the extent of duration and its effect on oral development remains a matter of concern.

The current study was planned to evaluate nutritive and non-nutritive sucking habits of children in an urban multi-ethnic setting, and to assess the effects of those habits on the development of malocclusion and convex facial profile.

The cross sectional study was conducted at the General out-patient department (OPD) of the National Institute of Child Health (NICH), Karachi, from June to December 2020. After approval from the Institutional ethical review board (IRB) and the IRB of Jinnah Sindh Medical University (JSMU), Karachi, the sample size was calculated using OpenEpi calculator10 version 3 taking reported prevalence 8%,9 confidence interval (CI) 95% and absolute precision 4%. The sample was raised using purposive sampling technique after taking permission from In-charge of General OPD. Those included were children of either gender aged 3-6 years having total number of deciduous teeth with normal shape and size. Those excluded were children with erupted permanent first molar, unhealthy birth, premature child, significant medical history and any dento-facial syndromes.

Data was collected using a proforma filled by the researchers. After noting down demographic data, including ethnicity, 9 close-ended questions were asked from the mothers about nutritive and non-nutritive sucking habits of their child. They were also questioned about healthy birth of babies. 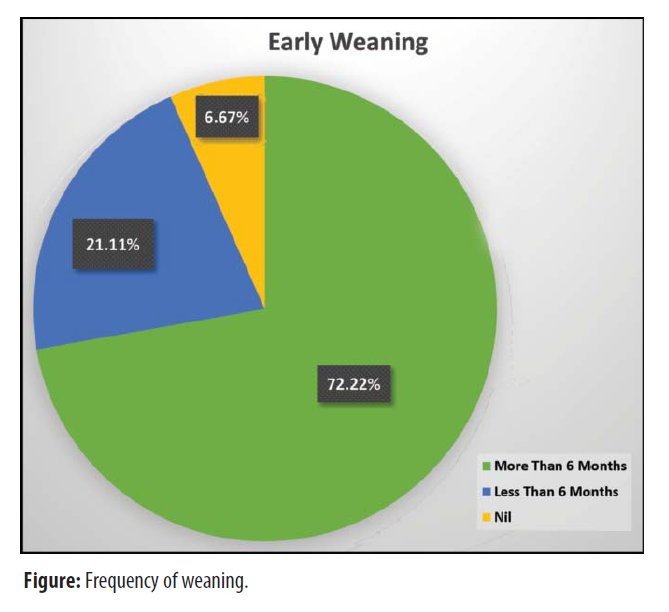 Prevalence of extra-oral and intraoral features of malocclusion in the two groups was documented (Table-1). 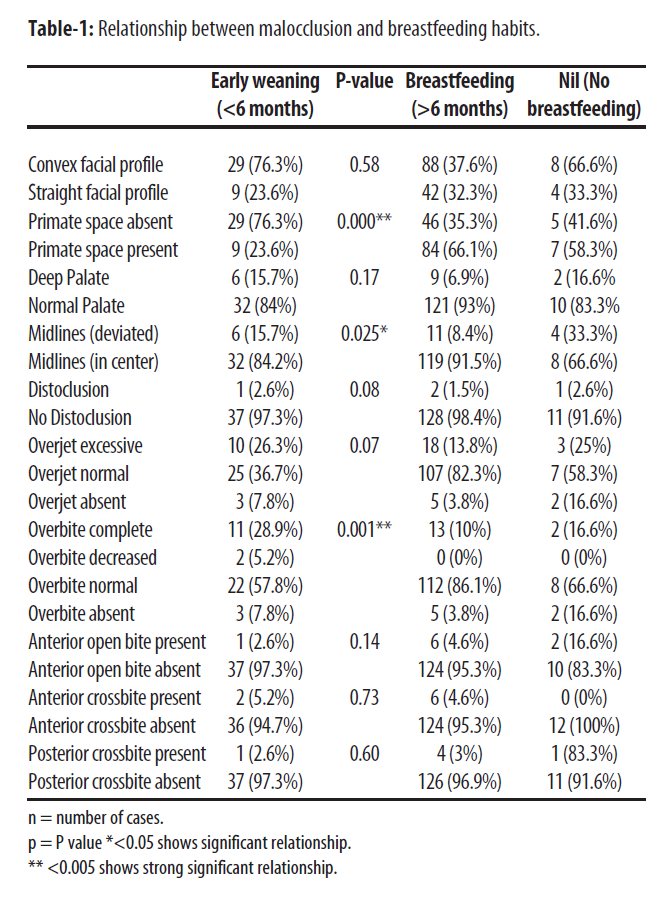 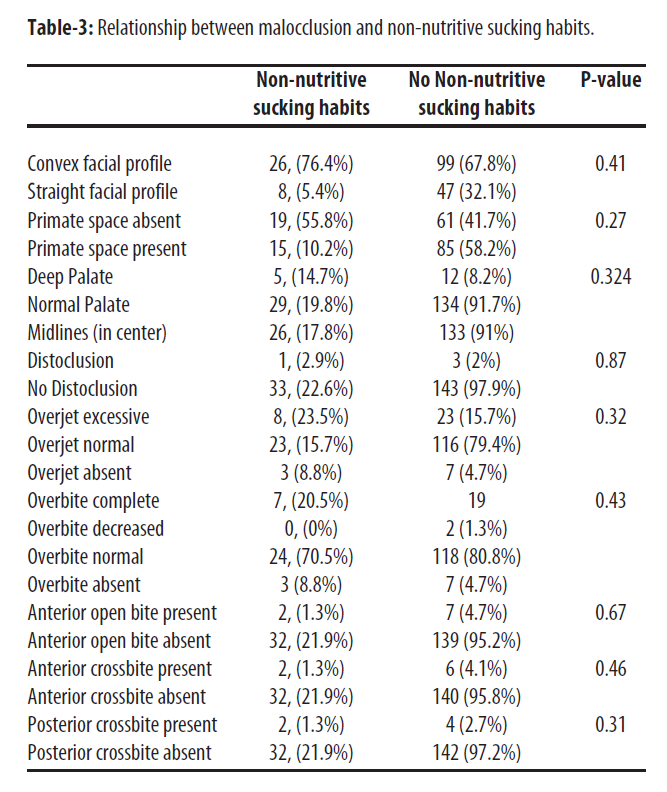 Breastfeeding is considered to have a positive impact on physical and mental development of a growing infant. Maternal milk contains all the necessary nourishment required to build up the immunological system and protects against respiratory infections.11 Studies reported that perioral muscles are activated by the sucking effect that is associated with the growth of maxillary and mandibular system's development.12,13

The current study was conducted among children aged 3-6 years from different ethnicities, and with the majority belonging to families having low income.

This study demonstrated 72.2% sample mothers breastfed their children for more than 6 months depicted majority of children in population will have less chances of early weaning associated malocclusion compared to 21.1% and 6.6% mothers who breastfed for less than recommended time and not breastfed at all respectively.

The baseline hypothesis was that environmental factors, such as early weaning, had an influence on underdevelopment of mandible in sagittal and transverse directions. The study failed to prove any significance association between short breastfeeding duration and convex facial profile (0.584), supporting earlier results14,15 that contradicted those who considered breastfeeding an important stimulus for mandibular growth.16 This difference of results demonstrated that breastfeeding was not the only stimulus for mandibular growth.

Prevalence of distoclusion was 2.63% which was way less than the reported values of 37.3% and 18%9,15 which illustrated decreased tendency of class II malocclusion in our population compared to India. The current findings were supported by a study in Peshawar, Pakistan,17 reporting distoclusion frequency 6.6% in primary dentition in children aged 3-5 years.

Spacing in primary dentition is physiological and its presence is critical for well aligned successors. As claimed by a study18 maxillary and mandibular width increase appreciably at 3-5 years of age, therefore children in this age group were studied to validate the influence of environmental effects on primate spaces. The current study found strong correlation between early weaning and absent primate spaces (76.3 %) (0.001) which was higher than reported frequency of 31%,19 50%15 and 36.7%.20 It can be assumed that the population in the current study had higher chances of developing mandibular dental crowding.

Non-nutritive sucking habits could be detrimental during growth if it continues for prolonged period.21 In the present study, girls reported higher prevalence of non-nutritive sucking habits (59.37%) than boys which is in line with literature.22 Consensus on this difference is not found, and it can be attributed to more emotional problems in girls, but this hypothesis had been rejected earlier.23

Also, 18.9% non-nutritive sucking habit prevalence was found in the current study which was less than 20% and 80% reported earlier.24,25 This could be attributed to better breastfeeding habits in Pakistani society.

Montaldo et al. stated high prevalence of non-nutritive sucking habits after 1 year among children who had the habit of bottle feeding which enhances the risk of malocclusions, i.e. posterior crossbites, anterior open bite or distal step occlusion,28 but the current study found no such correlation. Calming the crying child by other means could be the reason behind it.

Further studies on larger samples can help generalise the results on the entire population.

Early weaning was associated with development of non-nutritive sucking habits, and was a strong factor in establishing crowding and disturbed maxillary mandibular relationship. Breastfeeding <2 years had a tendency to develop anterior crossbite, and non-nutritive sucking habits showed significant relationship with deviated dental midlines. Besides, early weaning had no relation with the development of convex facial profile, distoclusion, anterior and posterior crossbite, anterior open bite and excessive overjet.