Objective: To evaluate the inflammatory cells in the complete blood count test and their relationship with the glycaemic control in type 2 diabetes patients.

Methods: The retrospective clinical study was conducted at the Department of Family Medicine, Bezmialem Vakif University, Istanbul, Turkey, from January 2015 to June 2016, and comprised adult type 2 diabetes patients' data, like complete blood count and biochemical parameters. The data was stratified according to glycated haemoglobin levels; <7% in group 1, and >7% in group 2. Data was analysed using SPSS 21.

Results: Of the 320 subjects, 172(54%) were in group 1 and 148(46%) in group 2. Overall, there were 106(33%) male and 214(67%) female subjects. The mean age of the sample was 53.6±11.9 years. White blood cell count, neutrophil count and neutrophil-lymphocyte ratios were significantly higher in group 2. Red blood cell count, mean platelet volume, fasting blood glucose, triglyceride, alanine aminotransferase levels were also significantly higher in group 2 (p <0.05).

Immune reactions are leading components of the several diseases. Inflammations play a key role in cardiovascular diseases and diabetes mellitus (DM). Recent developments show that the main component of the pathophysiology is the chronic activation of the immune system.1 Type 2 DM (T2DM) is a disease characterised by chronic hyperglycaemia and blood lipid and protein disorders. Glycated haemoglobin (HbA1c) is helpful for monitoring blood glucose level for 3-month period in patients with T2DM. Increased levels of HbA1c are associated with worsening of the disorder.2 Inflammatory markers in serum are related with HbA1c levels in T2DM patients.1 Due to inflammatory background of DM, inflammatory cells are also investigated for the prediction of the glycaemic control. Elevated white blood cell (WBC) count, as a classical inflammatory marker, is associated with several cardiovascular disease (CVD) risk factors and DM.3-5 Other increased CBC parameters and ratios have been found to be associated with endothelial dysfunction and inflammation-related diseases, such as metabolic syndrome and DM.6-9 In the last few decades, platelet-lymphocyte ratio (PLR) and neutrophil-lymphocyte ratio (NLR) were defined as potential markers to determine inflammation in T2DM.10-12

The current study was planned to evaluate the inflammatory cells and their relationship with glycaemic control in T2DM.

The data was retrieved from the electronic health records of the hospital (Table-1). Written informed consent had already been taken from all patients at the last routine appointment. 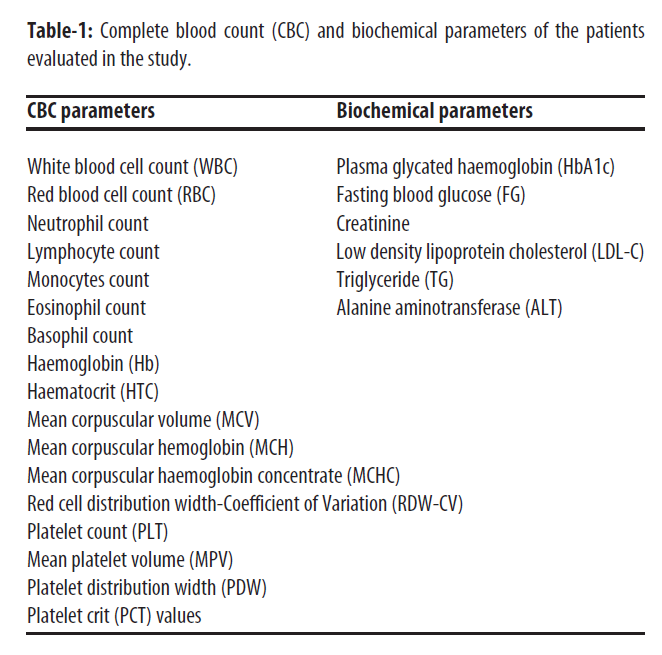 Complete blood count (CBC) parameters had been measured using an automated haematology analyzer (Sysmex 1800 t, USA). Venous blood samples had been collected into tubes with dipotassium ethylenediaminetetraacetic acid (EDTA) for CBC test, and tube with sodium fluoride and dipotassium EDTA for biochemical tests. Samples had been kept at room temperature and analysed within 1 hour to minimise variations due to waiting. All tests were carried out in the hospital labs which has quality standards in line with Technical Specifications (TS) European (EN) International Organisation for Standardisation (ISO) 15189. Glucose oxidase method had been used to analyse plasma glucose level (Cobas 8000, Roche, Germany). High-performance liquid chromatography (HPLC) method had been used to analyse HbA1c levels.

Data was analysed using SPSS 21. Variables were expressed as mean ± standard deviation and compared using Mann-Whitney U test. Spearman's correlation analysis was used for the analysis of correlation. P<0.05 was considered statistically significant. 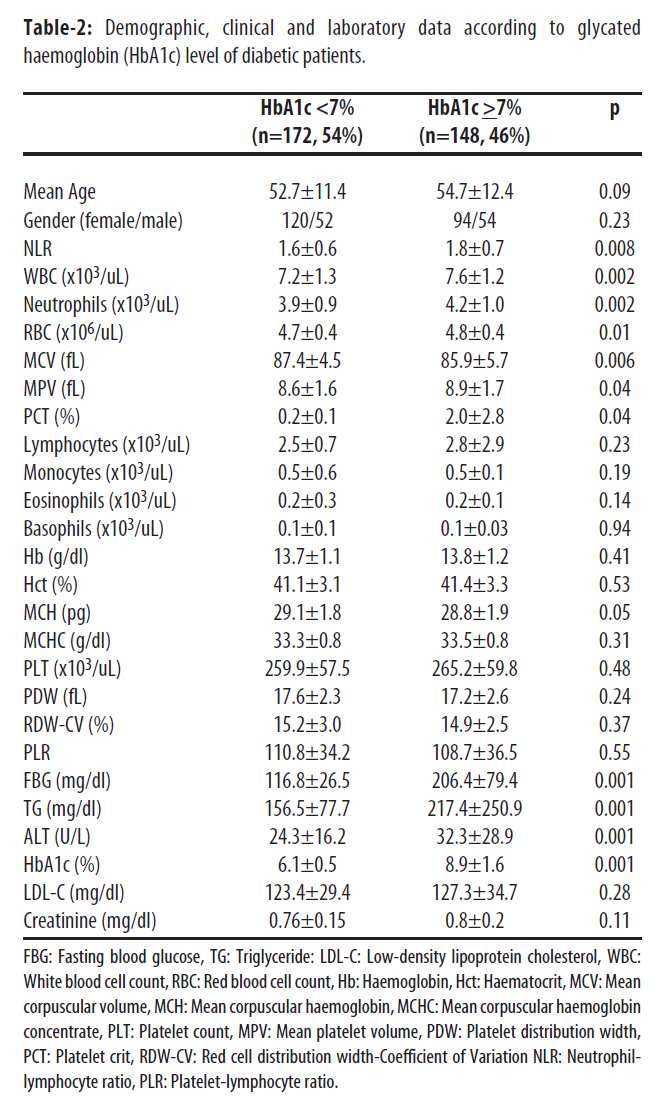 Neutrophils mainly have a role in acute inflammation due to their relatively short half-life. Increased neutrophils count could be related to insulin resistance (IR) through activate inflammation.14 Another study showed that elevated neutrophil count was related to the impaired insulin sensitivity. The homeostatic model assessment-insulin resistance (HOMA-IR) test results also supported such findings.1 The present study also showed that neutrophil count was higher in patients with unregulated diabetes.

The results of the current study are consistent with other reports that found NLR values to be higher in unregulated group than the well-regulated group.11,12 Mertoglu et al. showed that increased NLR and reduced PLR were found useful predictors of IGT and DM, and that PLR has bimodal changes decreased in the early stages but increased in the later stages during DM.15 There was no significant change in terms of PLR in diabetic patients in the current study.

RBC count was significantly higher in the unregulated group compared to the well-regulated group. Recent studies reported that RDW could indicate poor glycaemic control associated with increased HbA1c.16 Biadgo et al. claimed that haematological parameters were varied in patients with T2DM, and that persistent hyperglycaemia exposes RBCs to elevated glucose concentrations.17 This status changes erythrocyte morphology and increased RBC counts, as was found in the current study. Another interesting finding in the current study is reduced MCV and mean corpuscular haemoglobin (MCH) values in the unregulated group. This can be related to decreased RBC life span associated with poor glycaemic control.18 MPV is considered an indicator of platelet activation. Vascular complications of T2DM are related to increased platelet activity because of IGT.19 MPV and platelet counts are indicators of thrombotic potential, and risk factors for microvascular complications in diabetics.8 The current study found that MPV was higher in the unregulated group than the well-regulated group, which is in line with earlier findings.6,9

TG and ALT levels were higher in the unregulated group in the current study, which has also been reported earlier.20-23

The current study has its limitations. Relatively small cohort due to strict exclusion criteria is a major limitation. Besides, the retrospective design of the study means low generalisability of the findings.

CBC parameters, like WBC, neutrophil, RBC and MPV, had a significant association with unregulated diabetes. Simple CBC test showing NLR can be used as a cost-effective tool to monitor glycaemic regulation in T2DM.