A case of congenital methaemoglobinaemia with secondary polycythemia

Haemoglobin contains iron in a ferrous form. When the iron is oxidized, it is called Methaemoglobin (MetHb). MetHb leads to tissue hypoxia, cyanosis, and secondary polycythemia. Methaemoglobinaemia is acquired or congenital. In this case, a 22-years-old male patient presented with cyanosis, headache, and lack of concentration. Cyanosis was present since birth. His previous investigations showed polycythemia. He was misdiagnosed on multiple occasions and was undergoing venesections for polycythemia. On evaluation at a private clinic, an Oxygen saturation gap was noted between the results of the pulse oximeter and arterial blood gas analyzer. This raised suspicion on the presence of MetHb. He was referred to Armed Forces Institute of Pathology, Rawalpindi for further workup.The sample obtained for MetHb was chocolate brown in colour. Analysis was done via co-oximetry. A high level of MetHb (45.6%) was obtained. All other radiological and haematological investigations were in the normal range. On the basis of history, clinical presentation, and investigations, he was diagnosed as a case of congenital methaemoglobinaemia with secondary polycythemia.

Haemoglobin (Hb) contains iron in (the) ferrous state (Fe2+). When it is oxidized to a ferric state (Fe3+), it is called methaemoglobin (MetHb). The amount of MetHb normally present is < 1% of total Hb. Cytochrome b5 reductase (Cyb5R) and NADH reductase keep heme iron in Fe2+ state. Defect in these enzymes or presence of oxidative stress converts Fe2+ heme to Fe3+ form (metHb).1 Methaemoglobinaemia occurs when concentration of metHb is > 1%. It can be congenital or acquired. Acquired causes are usually drug-induced and are severe or fatal. The congenital variants are less severe. The most common cause of congenital metHb is a deficiency of cytochrome b5 reductase (Cyb5R).2

A 22-year-old male resident of Rawalpindi, student of grade 16, presented to Armed Forces Institute of Pathology, Rawalpindi, on Sep 7, 2020, for workup of cyanosis and polycythemia. The patient's recent history dates back to 2017 when he got his full blood counts (CBC) done during a febrile illness. Apart from raised total leukocyte count of 11.9×109/L (4-10×109/L), which settled with antibiotics, CBC also showed raised Hb of 21.9g/dL (13.5-16.5g/dL) and haematocrit of 63.8% (40-52%) as an incidental finding. He was initially diagnosed as a case of polycythemia without further investigations. The treating physician advised him to undergo frequent venesections to lower the haematocrit.

The patient started undergoing venesections after every 3 to 4 months. He complained of exhaustion and loss of concentration on and off, particularly after venesection, but he never got himself investigated thoroughly. On Aug 11, 2020, he visited a private clinic with complaints of mild chest pain and dyspnoea on exertion. He was cyanosed at presentation with low oxygen saturation on the pulse oximeter. Arterial Blood Gasses, ECG, and cardiac biomarkers were done, which were normal. Echocardiography, CT chest were advised, and the patient was discharged after symptomatic management with analgesics, nitroglycerin, and oxygen therapy. The patient's symptoms of mild chest pain, headaches, and lack of concentration persisted. On the advice of a friend, on Sep 7, 2020, he was examined by a pulmonologist who referred him to the Armed Forces Institute of Pathology, Rawalpindi, for further workup on the same day.

His past history revealed that he had slate blue discoloration since birth. There was also a history of easy exhaustibility and lack of physical activity. The remaining past surgical and medical history were unremarkable. He was born as a blue baby at full term at a private nursing home. He remained admitted for a day, where he was given oxygen therapy. He was discharged without any workup. Family history was unremarkable. There was no history of drugs, herbal supplementations, or chemical exposure. The patient belonged to a middle socioeconomic class. 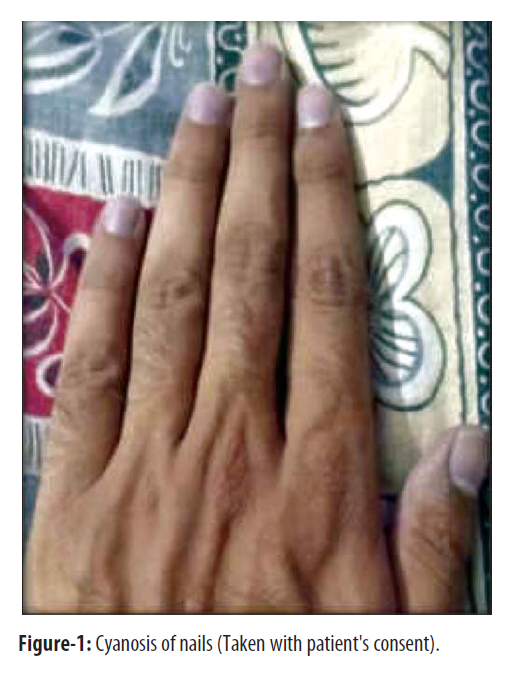 Radiological investigations like Chest X-ray, Echocardiography, Ultra Sound abdomen, High Resolution Computed Tomography Chest along with ECG were normal. Oxygen saturation (SO2) on pulse oximeter was 86% which did not improve with supplemental oxygen therapy. Arterial blood gas analysis showed normal PO2 (110mmHg) and SO2 (98.6%). The presence of saturation gap between pulse oximeter (86%) and arterial blood gas analyzer (ABG analyzer) (98.6%) raised suspicion of the presence of Methaemoglobin (MetHb). Therefore a 3ml sample was collected in K-EDTA tube for analysis of MetHb levels. On inspection, the sample was dark chocolate in colour much darker when compared to healthy subjects (Figure-2). 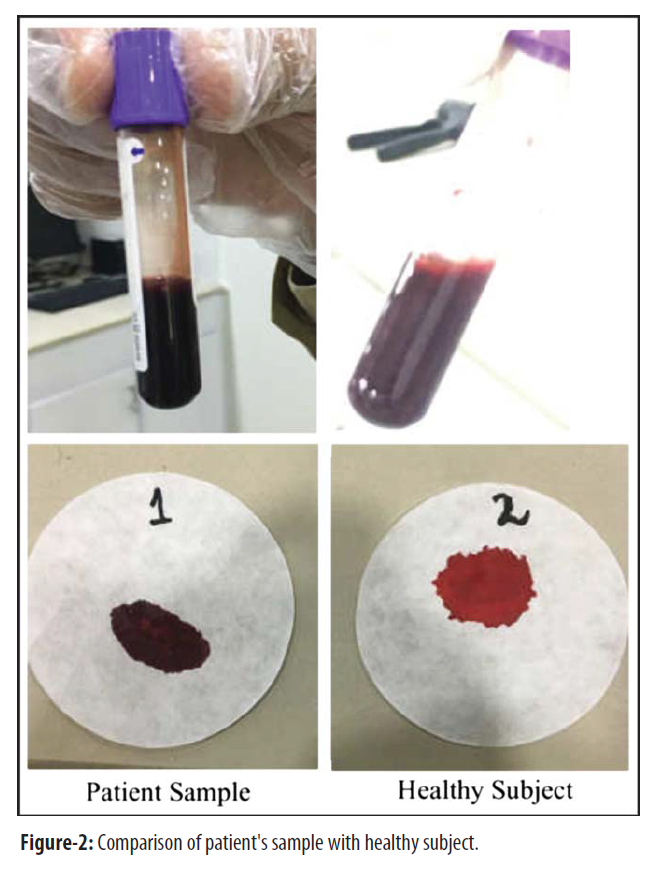 MetHb levels were analyzed on Cobas® b 221 (Roche Diagnostics) by Co-oximetry, which were grossly high 45.6% (Normal < 1%). ABG sample was obtained for analysis of fractional oxyhaemoglobin (FO2Hb) via co-oximetry, which was 51.8%. Based on the history, investigations, and MetHb levels, the patient was diagnosed as a case of Congenital Methaemoglobinaemia with secondary polycythemia. Enzyme deficiency could not be checked due to lack of facility. The patient was counseled about his disease and was advised to stop undergoing venesections, self-medications, use of chemicals and herbal products. The patient was referred to a pulmonologist for management with IV methylene blue and ascorbic acid supplements. The patient responded well to these agents. He was counseled about the nature of the disease and advised to undergo regular follow-up at a pulmonologist and psychologist clinics.

Congenital methaemoglobinaemia is less frequently encountered than acquired form in adults.6 History of exposure to chemicals, herbal supplementations, or drugs was not present in our case, ruling out acquired causes. However, history of cyanosis since birth and chronic nature of disease pointed towards a congenital cause. An undiagnosed case of congenital methaemoglobinaemia may present in adulthood, as in this case.6 Congenital MetHb could be due to enzyme Cyb5R deficiency (Type 1 to 3), Flavin adenine dinucleotide deficiency (FAD, Type 4) or presence of an abnormal HbM. Since HbM could not be detected in this case by Hb electrophoresis, Cyb5R enzyme deficiency or FAD deficiency was the most plausible cause of methaemoglobinaemia in our patient, although enzyme assay and genetic testing were unavailable.

Congenital metHb has immediate and long-term clinical sequelae. The immediate effect is cyanosis. Cyanosis becomes apparent when metHb exceeds 5%. CNS changes like headaches, dizziness, and lack of concentration occur at levels between 20 to 50%, whereas arrhythmias occur when the level exceeds 50%.7 MetHb level in our patient who presented with cyanosis, headaches, and lack of concentration was 45.6%. Long-term sequela of methaemoglobinaemia includes secondary polycythemia that occurs as a compensatory mechanism to keep tissue oxygenation at a normal level requiring treatment of underlying cause for clinical management.1 However, such cases are mismanaged by venesections which are usually indicated in Polycythemia Rubra Vera but contraindicated in methaemoglobinaemia.8 Our patient was undergoing venesections that probably led to an aggravation of his symptoms.

Cyanosed patients reporting to clinicians are evaluated via oxygen saturation on a pulse oximeter that measures oxyhaemoglobin and deoxyhaemoglobin at wavelengths 940nm and 660nm, respectively. MetHb negatively interferes at both wavelengths in such a way that when its concentration is > 35%, then SO2 on the pulse oximeter is around 86%, as noted in our case. Such cases are unresponsive to oxygen therapy.9 Oxygen saturation not improving with oxygen therapy in a cyanosed case requires determination of PO2 and oxygen saturation on ABG analyzer. PO2 reflects dissolved plasma oxygen content which is normal in such cases as noted in ours. Oxygen saturation calculated on the ABG analyzer from PO2 is called estimated SO2 (O2 Sat). Since PO2 is normal, so O2 Sat, being a calculated parameter, is within normal limits (98.6% in our case). A saturation gap noted between oxygen saturation measured via pulse oximeter and ABG analyzer raises the suspicion of the presence of an altered form of Hb (MetHb) that requires measurement of MetHb level via co-oximetry. Co-oximeter is a spectrophotometric module that measures blood concentrations of functional forms of Hb, which are oxyhaemoglobin (oxHb) and deoxyhaemoglobin (rHb), as well as dysfunctional forms of haemoglobin, namely carboxyhaemoglobin (COHb) and methaemoglobin (MetHb) based on the differences in their absorption spectra.7 Fractional oxyhaemoglobin (FO2Hb) was 51.8% and MetHb 45.6% in our case. As co-oximetry can distinguish these configurations, it is the main diagnostic tool for documenting methaemoglobinaemia.9

Congenital MetHb due to Cyb5R enzyme deficiency (Type 1 to 3) is treated with methylene blue and ascorbic acid, while Type 4 requires riboflavin supplementation. Methylene blue and ascorbic cause reduction of MetHb to normal Hb.9 Our patient responded well to IV methylene blue (200mg daily) and ascorbic acid (1000mg orally thrice a day), ruling out Type 4 congenital methaemoglobinaemia. In our case the absence of other clinical manifestations noted in Type 2 and 3 of Cyb5R enzyme deficiencies supported Type 1Cyb5R deficiency. The disease affects the patient psychologically, which may require psychotherapy and long-term follow-ups.5 Our patient was also counseled and advised to undergo psychological consultation.

Young patients suffering from congenital methemoglobinemia are at a higher risk of being misdiagnosed and mistreated. Early diagnosis using clinical history, examination and laboratory investigations like plasma methemoglobin levels should be carried out in such cases. Timely start of treatment with methylene blue and ascorbic acid can lessen morbidity and mortality in such patients. The presented case was diagnosed on the basis of a high level of MetHb, history and clinical presentation along with secondary polycythemia.

Patient’s Consent: Consent taken from patient for publishing the case.

Conflict of Interest: The person who signed ethical approval is also co-author.

A multi-disciplinary approach to the management of intra-venous and intra-cardiac leiomymatosis: A case report